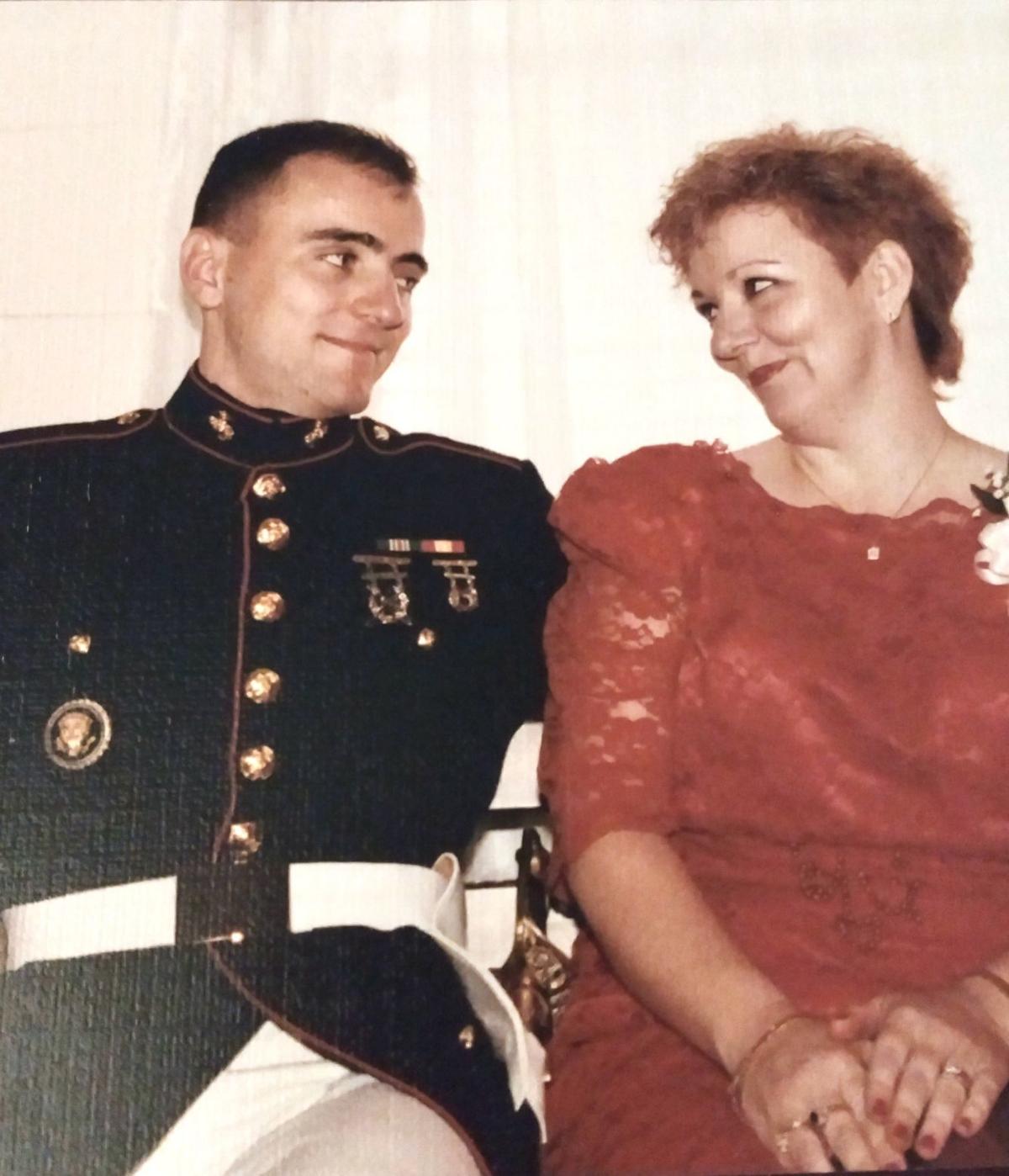 Renda Scott, right, sits with her son, David Randolph. Randolph was killed in an ambush in 2004. 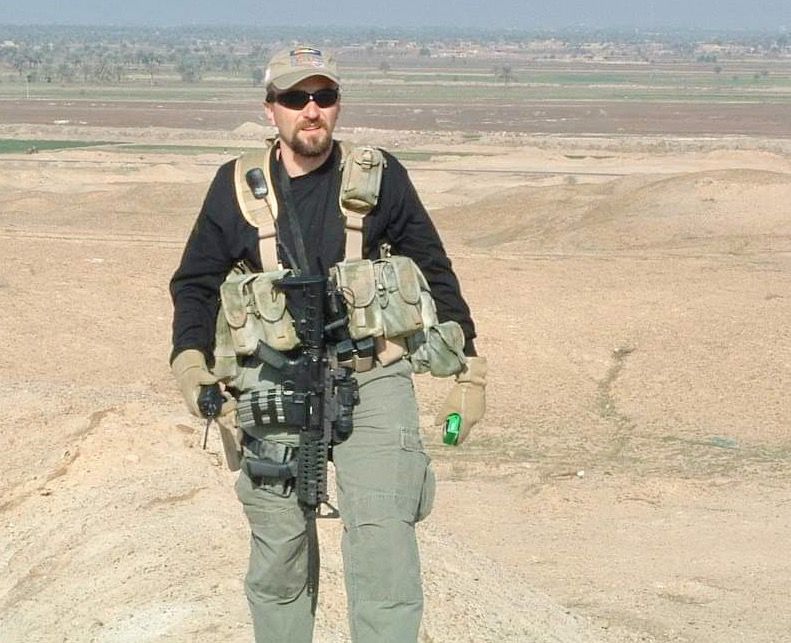 This undated photo shows David Randolph in Iraq where he was employed with EOD Technology, Lenoir City, Tennessee. 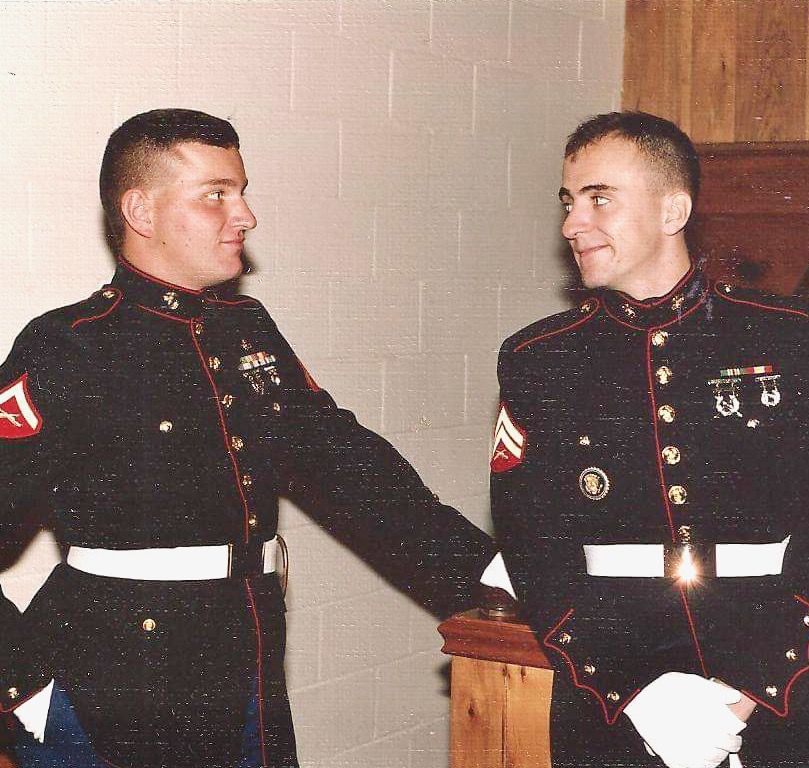 Jason Randolph, left, and David Randolph, right, seen together in an undated photo while both were serving in the United States Marine Corps. David Randolph was killed in 2004 while serving with the private military contractor EOD Technology. 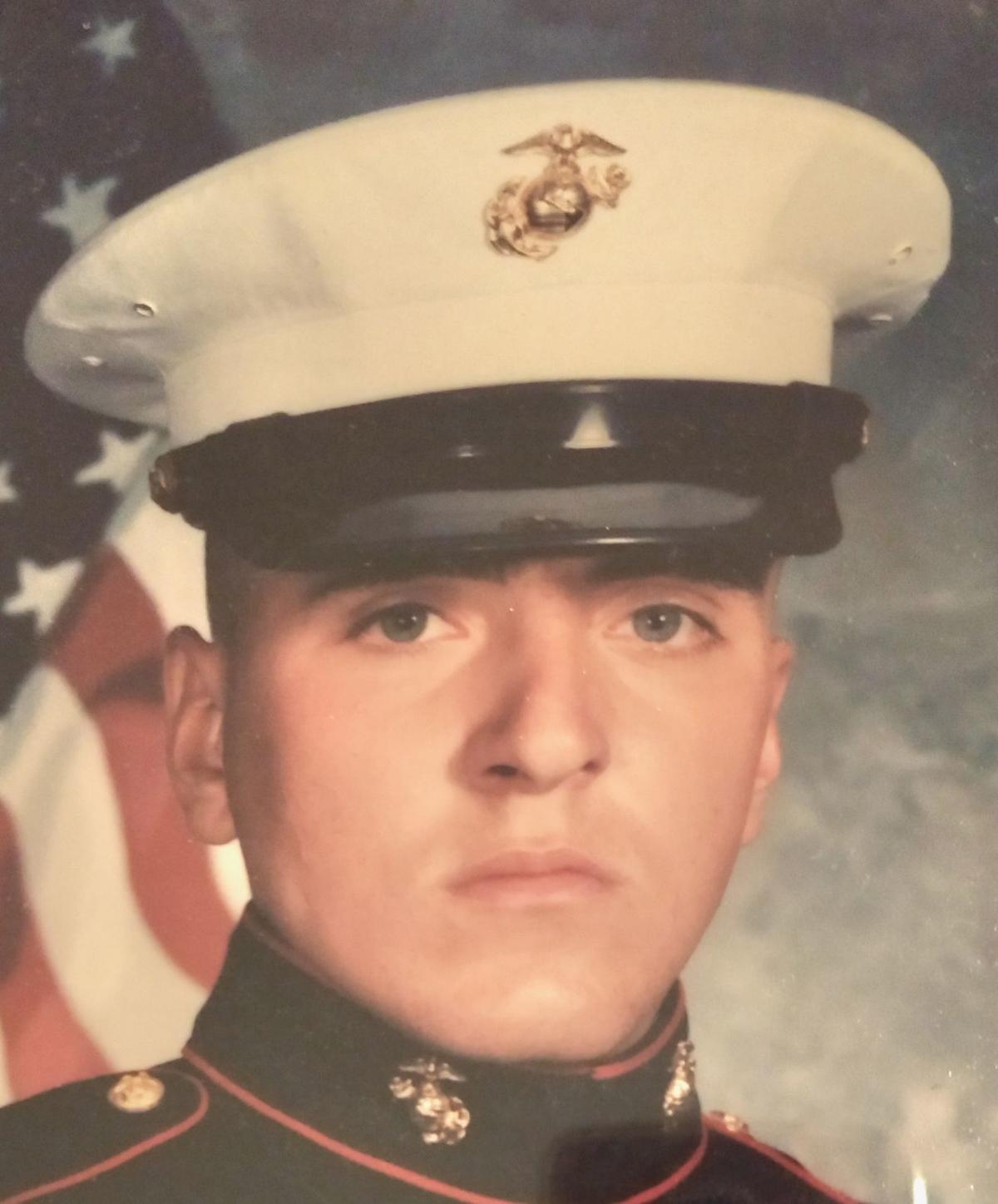 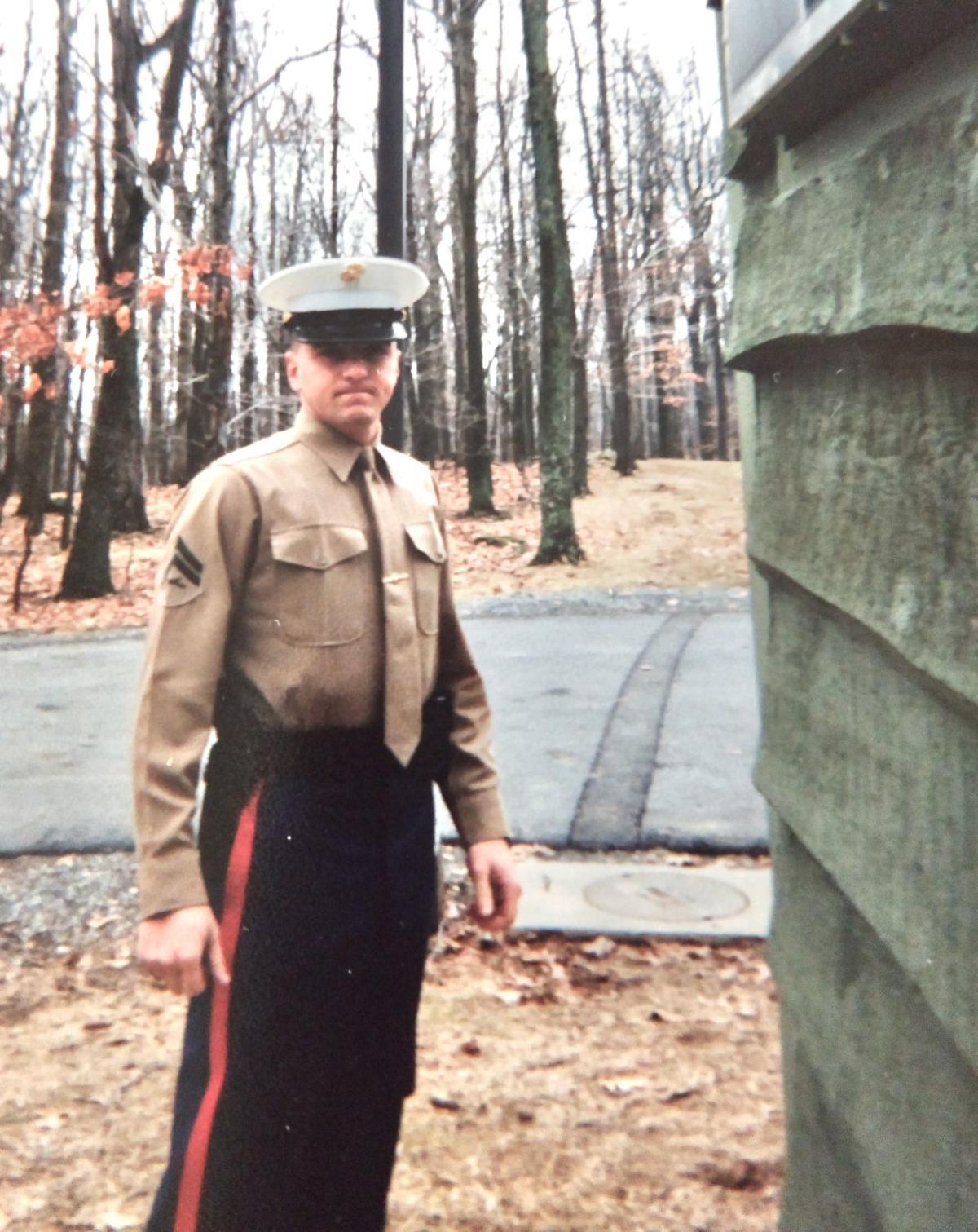 David Randolph, seen in a photo taken at Camp David while he served on the Presidential Protection Detail.

Renda Scott, right, sits with her son, David Randolph. Randolph was killed in an ambush in 2004.

This undated photo shows David Randolph in Iraq where he was employed with EOD Technology, Lenoir City, Tennessee.

Jason Randolph, left, and David Randolph, right, seen together in an undated photo while both were serving in the United States Marine Corps. David Randolph was killed in 2004 while serving with the private military contractor EOD Technology.

David Randolph, seen in a photo taken at Camp David while he served on the Presidential Protection Detail.

Fifteen years ago Renda Scott received the worst news a mother could ever hear. Her son, David James Randolph, was operating a convoy in Iraq when it was ambushed by insurgents. Randolph was in the convoy’s lead vehicle with Aaron Iverson. Both men were killed.

Scott described the moment in November of 2004 when her younger son Jason, along with her husband, brother, and David and Jason’s father arrived at her home to tell her.

“There were all these men,” she said. “My son stepped in, sat on the couch, bowed his head and began to weep. He said, ‘Well, he didn’t suffer.’

“I went and knelt at his feet to hold him and asked him, ‘Who? Who Jason?’

Scott describes Randolph, born in 1970, as “a protector” who was deeply concerned with what hurt people and what he could do about it. He loved to sing, fish and hunt and set his sights on a military career while a young boy. He enlisted in the Marine Corps and left for training before he was out of his teens after graduating from Chuckey-Doak High School.

“I can remember the anxiety and the joy at the same time,” said Scott. “He was ready to go be a part of what he knew his destiny was. His goal was to be a person who protected the president.”

Scott was as proud as Randolph when he was chosen most exemplary marine of his graduating class and put on the presidential detail, protecting Former President George H.W. Bush.

“I got a letter one day that said this: ‘Mom, I turned 20 today, on the day that they’re dedicating Camp David’s library,’” Scott remembers. “‘There are five living presidents in attendance and I’m the only man in the room with a gun. Bet you’ll never hear that again.’

“I think about that often. He was so happy and so proud about that.”

In addition to his service in the Marine Corps, Randolph worked as a K-9 officer in South Carolina and as a military contractor with Blackwater and EOD Technology. He was employed at EODT when he was killed.

“Of course he went to war and we all knew it was possible,” Scott said. “We knew he was in harm’s way 100 percent of the time. But God kept him so safe for so long that we just were not ready to hear those words.”

Before he left on his final assignment, Randolph, his wife and their four children — a 5-year-old, 2-year-old twins and a baby not yet a year — visited Scott at her home. She recounts what seemed to be foreshadows of his death the morning they parted. The first came as they were leaving the house to have breakfast together at Waffle House.

“They had gotten into the car and he got back out and said to the kids and his wife, ‘I want it quiet. I’m going to tell my mother goodbye.’

“That felt like thunder,” Scott said, using a metaphor of a warning of a storm to come. “He came back onto the porch and he hugged me and he told me in my ear, ‘I love you. Goodbye until the next time.’”

The last thing she said to her son at the restaurant before he drove his family back to South Carolina seemed to echo that thunder.

“I took him by the hands and I said, ‘You’re so beautiful to me. I just can’t take my eyes off of you,’” Scott said. “Of course a man doesn’t know how to handle that and he said, ‘Aw, Mom!’

“I said, ‘No, you don’t understand. I see you the way God sees you. He doesn’t take his eyes off his children. But in case you see you’re not going to make it, close your eyes and start singing, and sing your way home, because he promised he would never leave you, nor forsake you.’

“Those were my last words to my son.”

When Scott returned home, she went to the room her son and his wife had slept in.

“As I was walking down the hall and I saw those beds, it was just like, there was the funeral. There was this feeling, like it was real.”

But even those foreshadows couldn’t begin to prepare her for the reality of his death. Overwhelmed by grief, the normal things of life felt “pointless” to her. She couldn’t look at cards people sent her or acknowledge anything to do with his death. She described her grief as a silent place of darkness that left her able to only take in one moment at a time, not remembering the past or able to envision the future.

“After the funeral was held and he was buried and we came back home, there was a long time before I could talk,” she said. “I would sit at the table and I just couldn’t talk.”

“I’m sure many people did not understand me,” Scott explained. “You go into places sometimes, through these hard licks, that nobody understands what’s really going on in your mind or your behavior.”

Scott began to “wake up” after her husband decided to try talking her out of the darkness. Sitting at the table while Scott still sat silently, he began recounting his memories of Randolph. One day, it drew a response.

“From that day forward, I began to interact more,” she said, through tears. “I began to speak again. I learned to be thankful for every breath he was given, every year, every moment that I had with him. I began to wake up, like waking up from a long sleep.

Scott now takes comfort in knowing that her son was loved and lived a joyful life, though the loss is still keen.

“He was my friend and I miss him,” she said.

Memorial Day brings up poignant feelings for Scott and “the humanness” behind a day to honor those she calls patriots.

“A lot of people don’t have any concern with Memorial Day. They think it’s a party. … It’s remembering people who guarded the very life they have — the lifestyle, every reason to want to be in America. Memorial Day is a day to stop and understand that they are loved by love at its best, because someone decided, ‘I will even give my life so you can continue to have your freedom, your liberties.’ A patriot died for every one of us.”

She adds, “The way to bring darkness on our nation is to stop remembering.”