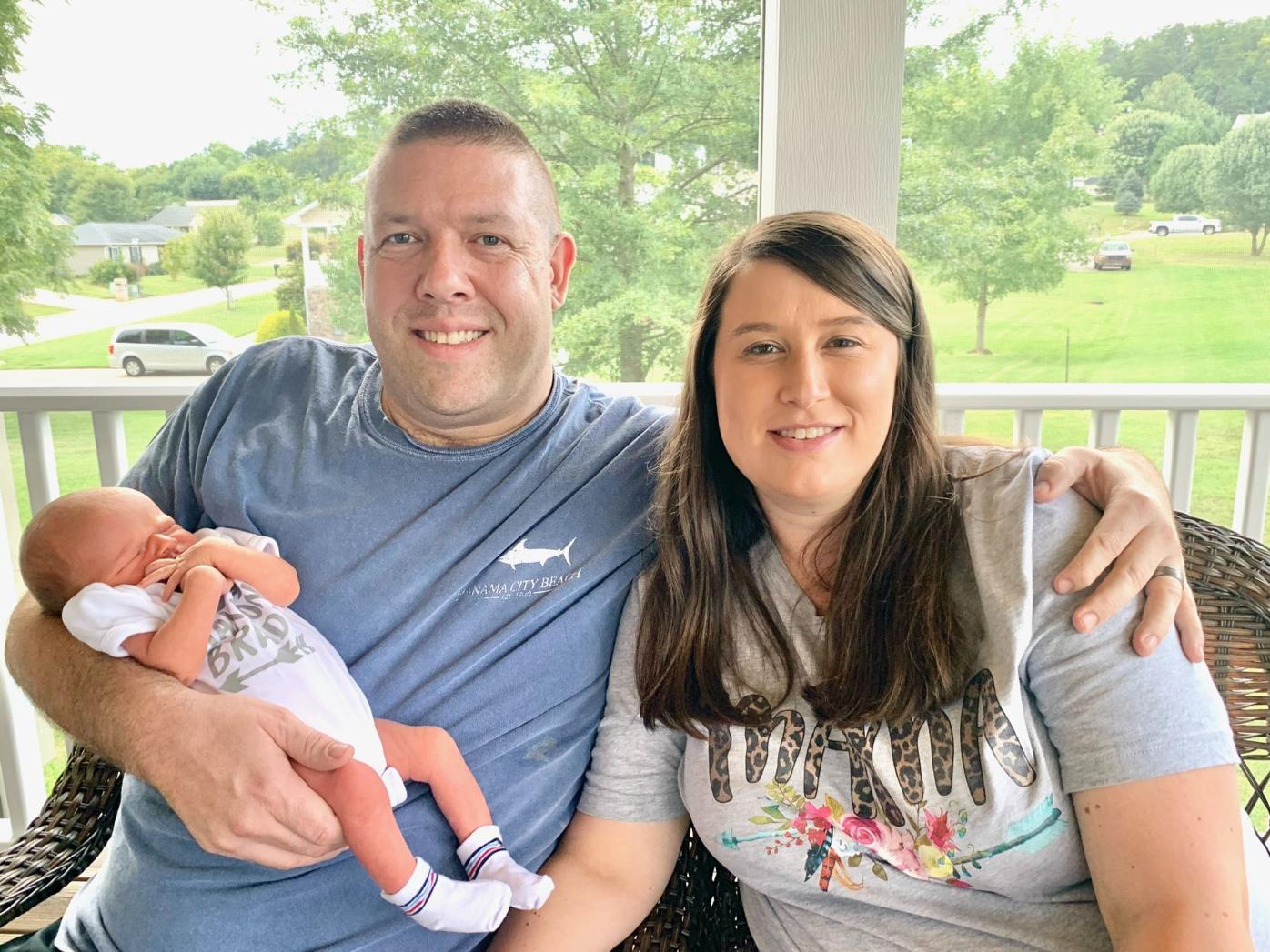 The Prokop family enjoys a happy reunion at their home. From the left are Jaxson, Joe and Kari Beth. 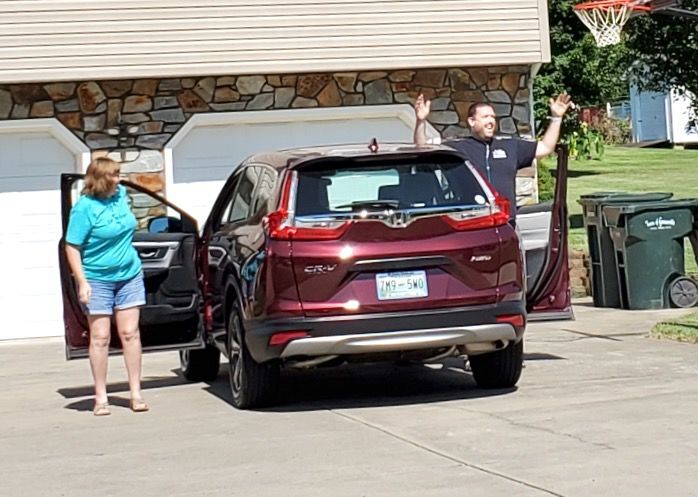 Linda Roper, left, brings her son, Sgt. Joe Prokop, home after he was released from the hospital.

The Prokop family enjoys a happy reunion at their home. From the left are Jaxson, Joe and Kari Beth.

Linda Roper, left, brings her son, Sgt. Joe Prokop, home after he was released from the hospital.

When Jaxson Brady Prokop arrived in the world on Sept. 5, he didn’t know anything about his mother’s high-risk pregnancy or the COVID-19 Pandemic. He is still unaware that his father came dangerously close to dying from from the disease before he could meet him. Those are stories they will, no doubt, tell him later. For now, the first-time parents are just happy to have their little family home all together.

Jaxson was due to arrive on Sept. 4, a date agreed upon by his parents and the doctor who was caring for his mother and monitoring her pregnancy, which was complicated by an issue with his umbilical cord. But on Aug. 15, Jaxson’s father Joe, a sergeant with the Greeneville Police Department, started developing mild symptoms that he guessed were caused by COVID-19.

“I first started having symptoms that evening,” Joe Prokop explained. “It was just mild body aches and fever. I kind of thought at the time that it could have been COVID because that week before we had had sort of a little outbreak at the police department. About six or seven other officers started having symptoms. Some had gotten tested and been confirmed positive at that point.”

Over the next couple of days, Prokop’s symptoms continued to worsen. He got tested on Monday, Aug. 17, and received notification of a positive result the next day. Still, he wasn’t too alarmed as he isolated himself at home. But things got worse rather than better.

“I just had those flu symptoms for probably about the first week,” he said. “Then it was kind of weird because those symptoms started going away except for the fever but then I started noticing some shortness of breath and a little trouble breathing. On Aug. 23, on a Sunday, I ended up going to the emergency room at Greeneville Community Hospital East to get checked out.”

Hospital staff determined he had viral pneumonia. Because that can’t be treated with antibiotics and his oxygen levels remained in the 90s, Prokop was sent home.

“It was crazy,” said Kari Beth, Prokop’s wife. “I’m a nurse, so in the back of my mind, I’m thinking about day 8-10 being the worst that we’ve seen at the hospital. Once he started getting shortness of breath, I started getting concerned. The next day, the pneumonia had gotten two times worse just overnight.”

Kari Beth, nine months pregnant, got her husband to the hospital, struggling to help him out of their van and into the emergency room of Greeneville Community Hospital East.

“So I’m stressed to the max with that,” she recalled. “I just want him to be OK.”

“I’m trying to get somebody to take me seriously that he needed oxygen as soon as possible,” she added, her voice breaking as she fought back tears. “That felt tragic because (I was asking myself) ‘When are you ever going to see your husband again?’ I was just a ball of emotions being pregnant anyway.”

Prokop was admitted and spent a night in the COVID unit. His oxygen levels continued to drop.

“I went from needing two liters of oxygen to start with and went up to eight liters and then 15 liters,” he said. “By the next day, I was up to probably 30.”

Greeneville-Greene County EMS transferred him to Johnson City Medical Center by emergency traffic as his oxygen capacity continued to deteriorate. Within three hours of his arrival, he was transferred to the Intensive Care Unit.

“At that point, I was up to high flow, 50 liters of oxygen at 100 %,” Prokop said. “That was the maximum setting those machines will do, just to keep my oxygen level around the upper 80s to 90.

“It was a scary time. The next step would have been to be put on a ventilator. That was discussed several times because my oxygen level would just drop for no reason. If I just rolled in bed, my oxygen level would drop. We came really close. At that point they were telling me, ‘If you go on a vent, it’s up to God whether you come off it or not.’ There’s a lot of people who don’t make it off a vent. Some people go into comas.”

His doctors “‘were basically throwing everything but the kitchen sink at me,” he recalls. “I was on multiple, high powered antibiotics just as a precaution. I was on experimental antiviral medication, steroids, they gave me the convalescent experimental plasma treatment, Lasix to keep fluid off my lungs. I was on all kinds of stuff. But it worked. Something worked. Slowly, my lungs started to build up oxygen. Toward the last few days, they said I just sort of turned a corner and started improving.”

Prokop’s stay in ICU lasted for 14 days and he was due to be released on Sept. 6.

Meanwhile, Kari Beth kept her own doctor appointments and discussed moving the due date in the hopes that her husband would recover in time to be present for the birth. The baby was doing well and they agreed Kari Beth would be induced to deliver her son on Sept. 11. Her son apparently didn’t get that memo and at 4:30 a.m. on Sept. 5, Kari’s water broke. Her sister drove her to Franklin Woods Hospital with a police escort. Seventeen hours later, Jaxson was born.

“When my water broke while he was still in the hospital that broke my heart,” she said, tearfully. “I really wanted him to be there.”

Prokop, who watched the delivery on Facetime from his hospital bed, was released the next day, still on oxygen and requiring physical therapy. His department gave him a surprise escort to his home.

“I wasn’t expecting that at all but I really appreciated it,” he said. “We’ve got a good bunch of people at the police department. They were great, checking on my wife and me and making sure we had everything we needed the whole time.”

Although his wife couldn’t be there, his fellow officers sent photos and videos to include her.

“It was overwhelming to get the pictures when it was happening,” she recalled. “I Facetimed him. I can’t even explain the feeling to see him able to be in the car and going home. And finally seeing a picture of him at our driveway with him getting out of the car. It was overwhelming.”

Two days later, Kari Beth and Jaxson were released and the family was reunited in their home.

“It’s been a crazy time,” Kari Beth said. “God’s really had our back and has been watching over us this whole time, to be able to get him through this and get him on his healing process and on the road to recovery, and to watch over me and the baby while he was in the hospital.

“I think that we came out stronger and we can get through anything after having to go through all this. You definitely have to be strong with all this because if you can’t keep a positive attitude and keep your faith, everything negative and all the turmoil would just put you in a state of depression, honestly. That just wasn’t an option for us. I had to stay strong to keep myself not stressed and keep him on solid ground, to let him know that we were OK and were going to get through this.”

“She’s been my number one supporter through this whole thing,” said Prokop, who describes his wife as amazing. “I couldn’t have done it without her. She was on top of things the whole time. She talked to the doctors and ICU staff twice a day, getting updates and talking about strategy.

“I just thank God that I’m able to come home and still be here. I’m thankful for family and friends. I had an amazing outpouring of support and a lot of people praying.”

The family plans to stay at home for a while.

“We’re going to spend some time together, all of us,” Kari Beth said. “I don’t have a need to go anywhere.”