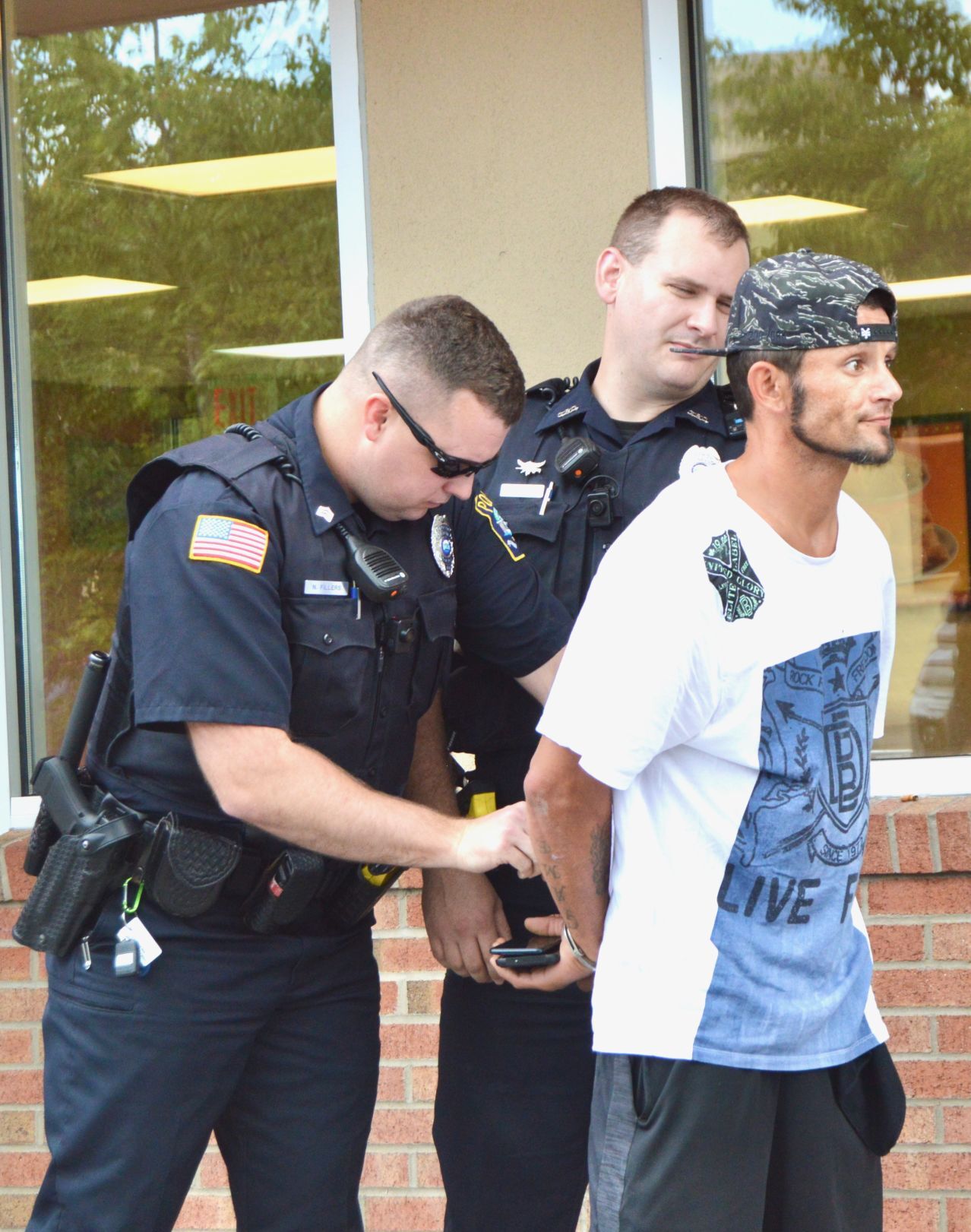 Sergeant Nick Fillers, left, and Patrol Officer Ethan Metcalf, center, put handcuff’s on suspect Joshua Bitzer. Fillers provided back-up for Metcalf on the call, which resulted in Metcalf later finding 6 grams of methamphetamine on Bitzer, according to a police report. 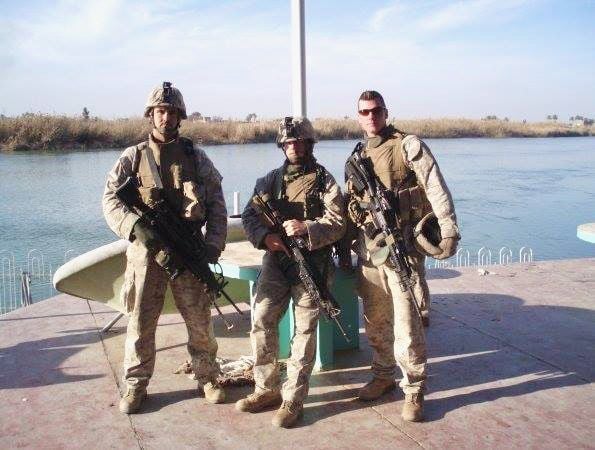 Nick Fillers, then a sergeant in the United States Marine Corps, pauses during a patrol for a photo with Bryon Bailey, left, and Tom Stellema, right, on the bank of the Euphrates River just outside Fallujah, Iraq, in late 2006. 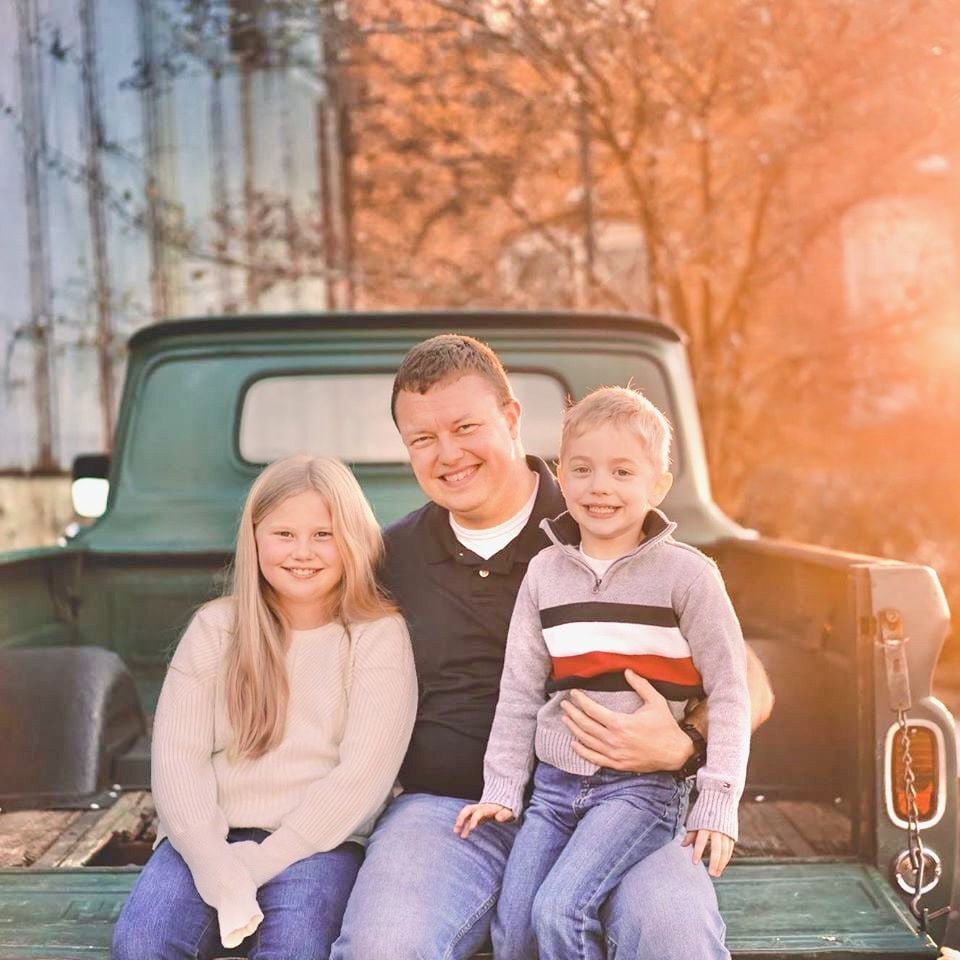 Nick Fillers poses for a family portrait with his two children in this undated photo. 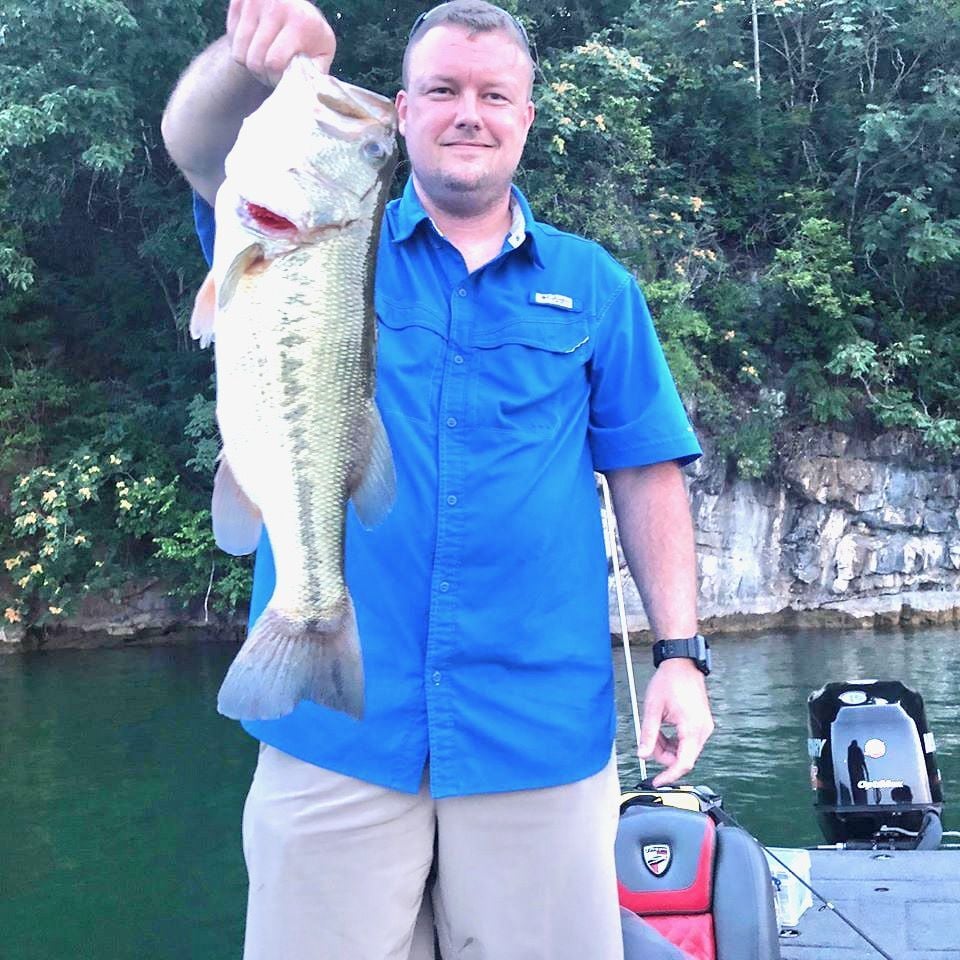 Sergeant Nick Fillers holds up a prize from a day's fishing. Fillers likes to fish when not at work with the Greeneville Police Department. 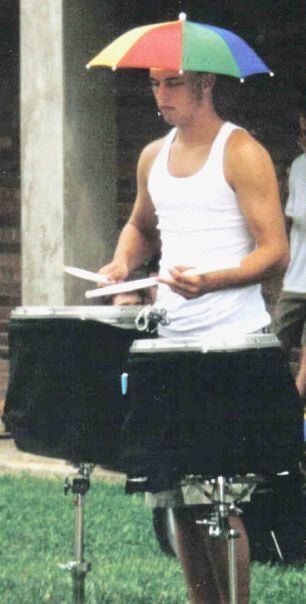 Music holds fond memories for Nick Fillers, such as this one from a band camp with Greeneville High School in 2000. Fillers is now a sergeant with the Greeneville Police Department. 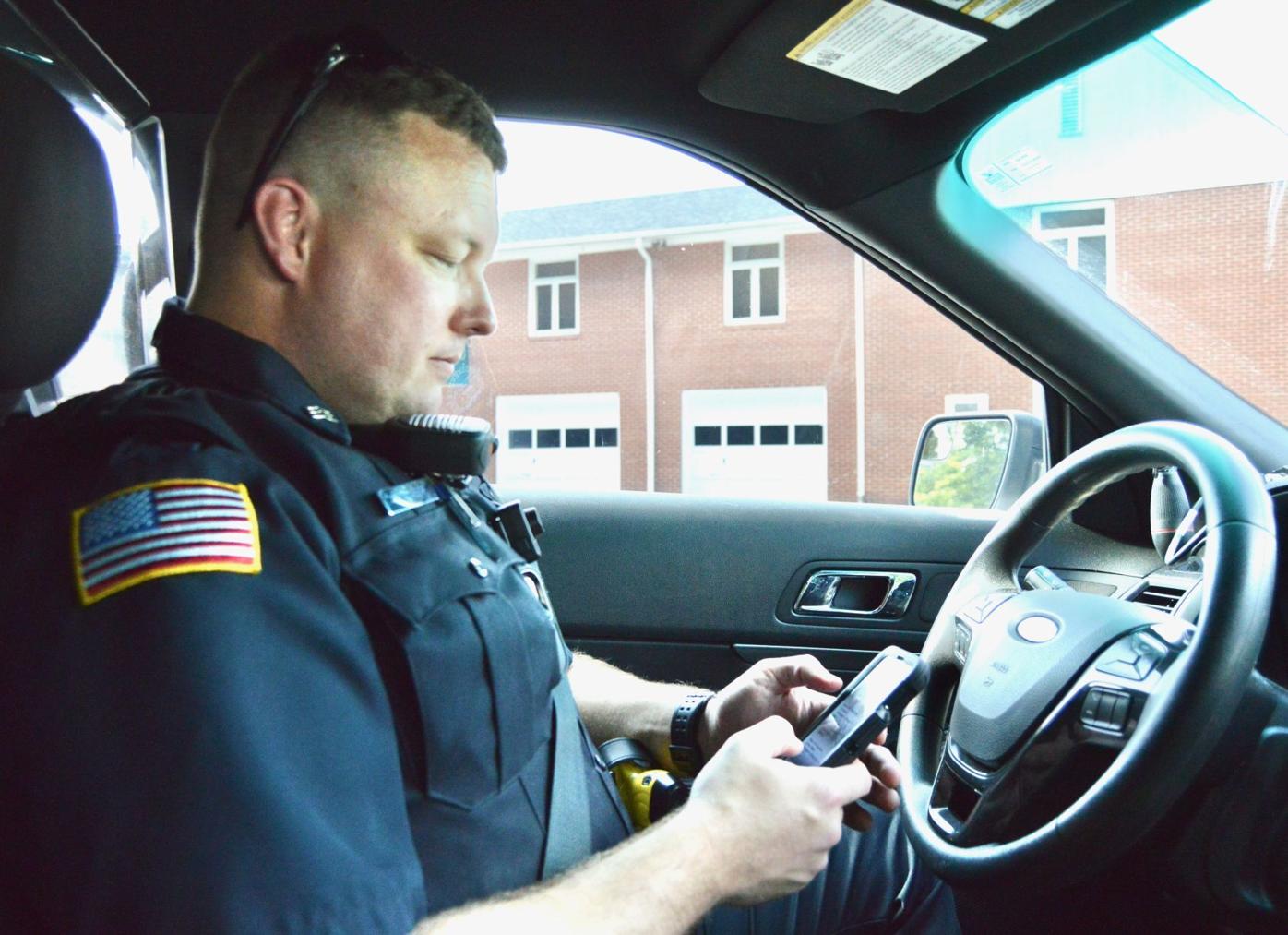 Sergeant Nick Fillers, left, and Patrol Officer Ethan Metcalf, center, put handcuff’s on suspect Joshua Bitzer. Fillers provided back-up for Metcalf on the call, which resulted in Metcalf later finding 6 grams of methamphetamine on Bitzer, according to a police report.

Nick Fillers, then a sergeant in the United States Marine Corps, pauses during a patrol for a photo with Bryon Bailey, left, and Tom Stellema, right, on the bank of the Euphrates River just outside Fallujah, Iraq, in late 2006.

Nick Fillers poses for a family portrait with his two children in this undated photo.

Sergeant Nick Fillers holds up a prize from a day's fishing. Fillers likes to fish when not at work with the Greeneville Police Department.

Music holds fond memories for Nick Fillers, such as this one from a band camp with Greeneville High School in 2000. Fillers is now a sergeant with the Greeneville Police Department.

Nick Fillers remembers September 11th. The then 18-year-old stopped setting up his drum kit for a practice session when his bandmates walked in with looks of shock on their faces. They’d heard the news reports about planes crashing into the World Trade Center on the radio. Fillers turned on the radio and listened to the broadcasts detailing the unfolding aftermath of the terrorist attack remembered as 9/11.

Two years later Fillers, who says the thought of that day never completely left him, enlisted in the Marine Corps to find some guidance and direction for his life. It turned out to be the beginning of a lifetime of service in both military and civilian roles.

“The military was a good option, especially with what happened September 11th of 2001,” Fillers said. “We had just started into the war at that time. It just kind of took over who I was and I wanted to do what I could do, to do my part.”

After boot camp, he went to infantry school to further learn the tools of the trade he was going into. His first deployment found him in Fallujah, Iraq, in 2006.

“I was a team leader during that deployment, which meant I was directly responsible for three lives below mine. I was 23 at the time,” he said. “Once we put boots in the dirt, there wasn’t a day that went by that we weren’t either shot at or involved in a fire fight until the day that I left.”

Fillers conducted foot and vehicle patrols in the city and outlying villages. Several days during that deployment stand out to him, including Christmas Day of 2006.

“We had a target identified that we had to go and capture,” Fillers explained. “My squad was on foot patrol detail. We got surrounded in a cemetery. We had heavy fire coming from each direction. We faced a machine gun to our front and was flanked by small arms fire and had two or three behind us with small arms fire as well. Fortunately, there were two helicopters above us that didn’t even hear our radio frequency but apparently they saw the tracers back and forth. They hovered over us and we were able to walk out.”

“Getting lost in your thoughts was the worst enemy on the battlefield,” said Fillers. “Thinking about home, wondering what your family was doing, what your friends were doing, the combat losses as far as your brothers and sisters that were there. If you dwell on their deaths, you make yourself an easier target because your mind’s not focused on where it needs to be.”

Combat requires strict attention to the present moment but the intensity of working and surviving in a war zone goes a long ways towards helping to maintain that focus.

“When you’re there, you’re not thinking about self-preservation or anything else,” he said. “It’s about the guy to your left and your right. You know this is your job. It’s what you have to do. My job was to bring my guys home. No different from what I do right now.”

What he does now is patrol the streets of his hometown of Greeneville.

“I kind of went back and forth for a while,” said Fillers of his decision to go into law enforcement after leaving the Marine Corps. “I thought I wanted to step away from everything like that. I did a few little jobs here and there, retail and things like that, but I just never could get away from it so I applied and tested and it ended up working out.”

Fillers has earned the rank of sergeant in his new profession, the same rank he held when he left the Marine Corps, which means he also carries responsibility for the patrol officers he works with. On any given day, he may find himself directing traffic or responding to a domestic violence call. He readily admits he enjoys investigating crashes, saying, “It’s analytical. It’s the one thing that we do that I can look at and I can determine exactly what happened. It’s not because somebody got upset.”

When asked what a typical day on the job is like, he replied simply, “There isn’t one.”

“We see bad things. We see very good things,” he said “I’m the lowest level patrol supervisor. On a patrol shift we have a sergeant, a lieutenant and a captain. It depends on the day. I may be the shift leader. I may be the dispatcher. Today I’m in a back-up capacity when one of my guys goes on a call. I have to inspect evidence submission. I have to review and approve reports, as well as go on calls if all my units are tied up.”

It’s a demanding job that doesn’t fit neatly within a nine to five box but he likes both the administrative aspect of his job and working calls for different reasons.

“I like to get in, get my hands dirty but at the same time, it’s kind of enjoyable to be able to step back and know that you’ve helped these people develop themselves to be able to handle all the responsibility of responding to something,” said Fillers.

But what he loves best about his job is the opportunities to help others.

“I guess I took over the role of protector,” he said. “I don’t know what else to do. I don’t like being cooped up inside. I appreciate that my office is my vehicle. I’m out on the road. I’m out in the sun, the rain, the snow, whatever it may be, just hoping to get to help that one person a day. I don’t care if I ever write a ticket again. I don’t care if I ever make another arrest. My reason for being here is to help.”

Fillers cherishes his memories of working with children in the Greene County School System earlier in his career. Before schools had dedicated resource officers, Fillers and other GPD officers would go into work on their days off to go to the schools as resource officers. That allowed him to do what he loves best.

“Unfortunately, a lot of our job is negative,” he explained. “So some of these children in these schools, the only experience they have with police officers is their parent getting a speeding ticket or Daddy was hitting Mommy and we had to come take Daddy to jail.

“It’s important for a child to know that we’re the people to come to when they need help, not to run away, not to hide, not to be afraid of us. It was my personal goal when I was working at the schools to find one kid every day — and it wasn’t hard to see that child, they would look away, avert their eyes — and just put a smile on their face, whether it was sitting down and eating lunch with them or just pushing them on a swing outside when they were at recess.”

With the current social climate of mistrust, fear and frustration, Fillers hopes that message will reach more than just the children.

“It seems like there’s a lot of us versus them. I don’t like that,” he said. “If we don’t come together as a people, I’m afraid things are going to get much worse before they start to get better. I hate that things are what they’ve become.

“Mutual understanding is going to involve all parties in going out on limbs. We’re going to have to learn to trust each other. Anyone is welcome to come by the police department and sign up to do a ride-a-long to see how we conduct business day to day. If someone has concerns about the training that we have, they can come ask. Everything that we do is transparent and that transparency is done in the hopes of getting the public to trust us in what we do.”

In the meantime, Fillers will keep patrolling and keep protecting.