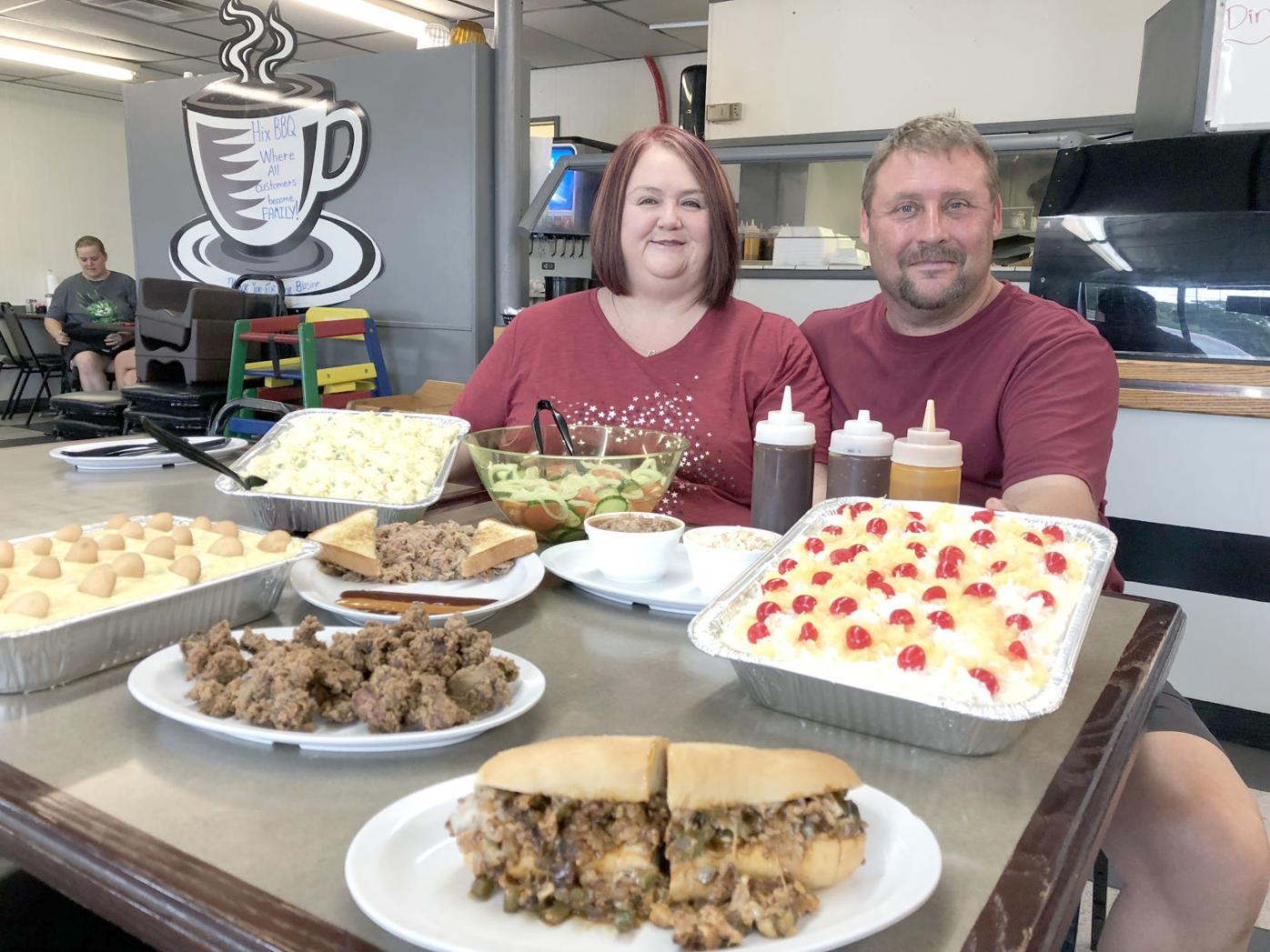 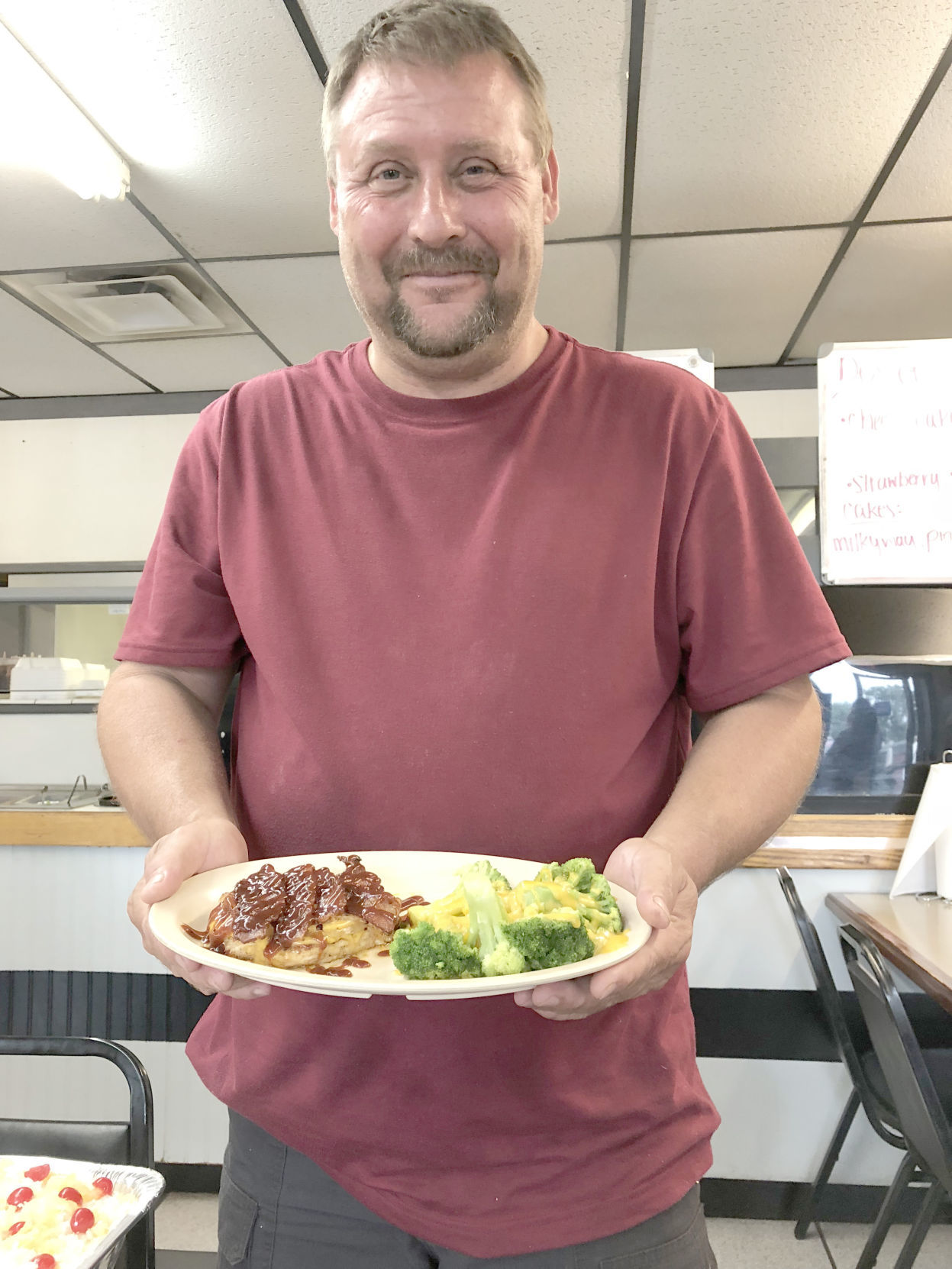 Brian Hixon shows off a new chicken dish, topped with Hix BBQ and Catering’s barbecue sauce, and a side of broccoli and cheese. 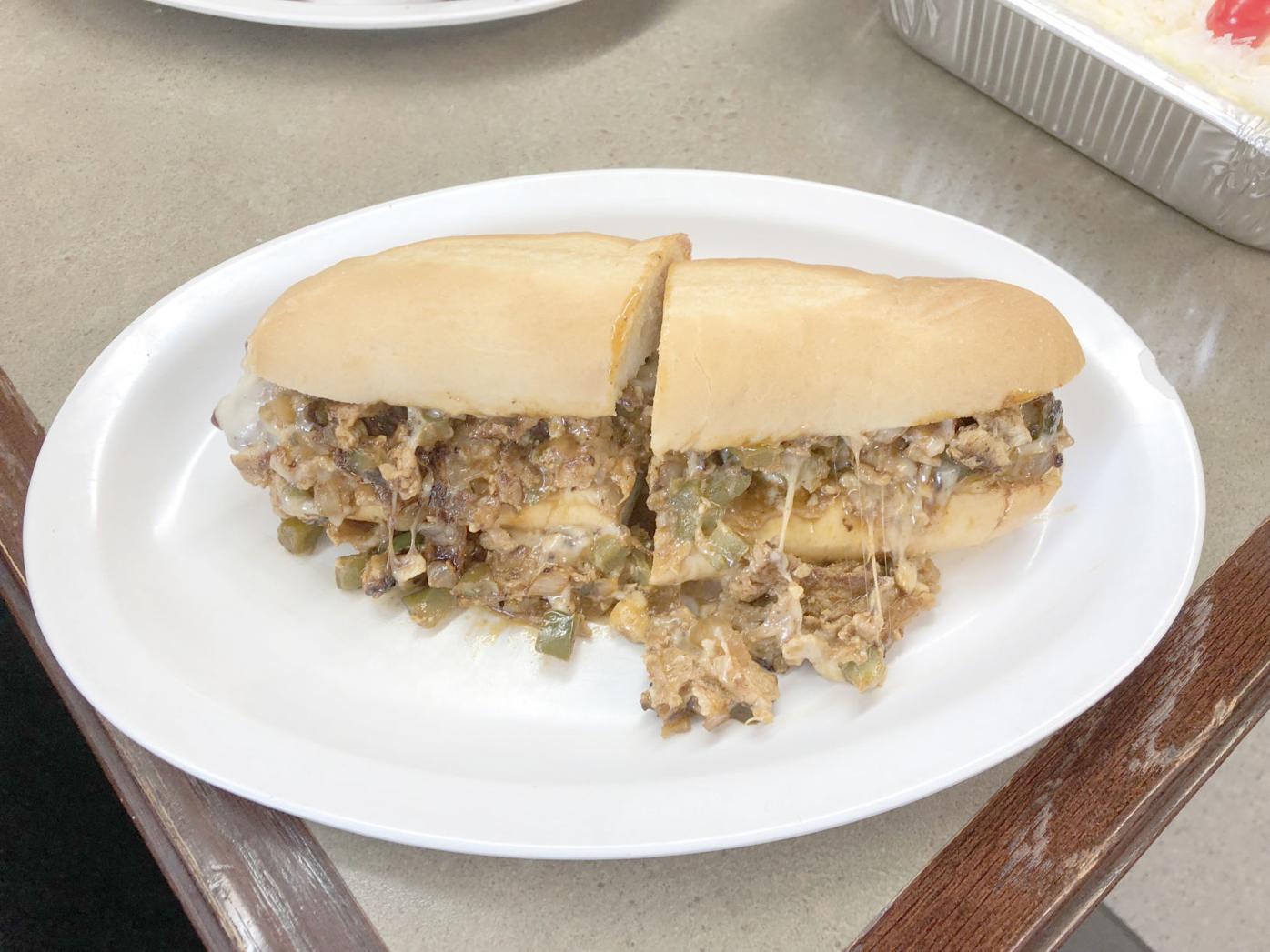 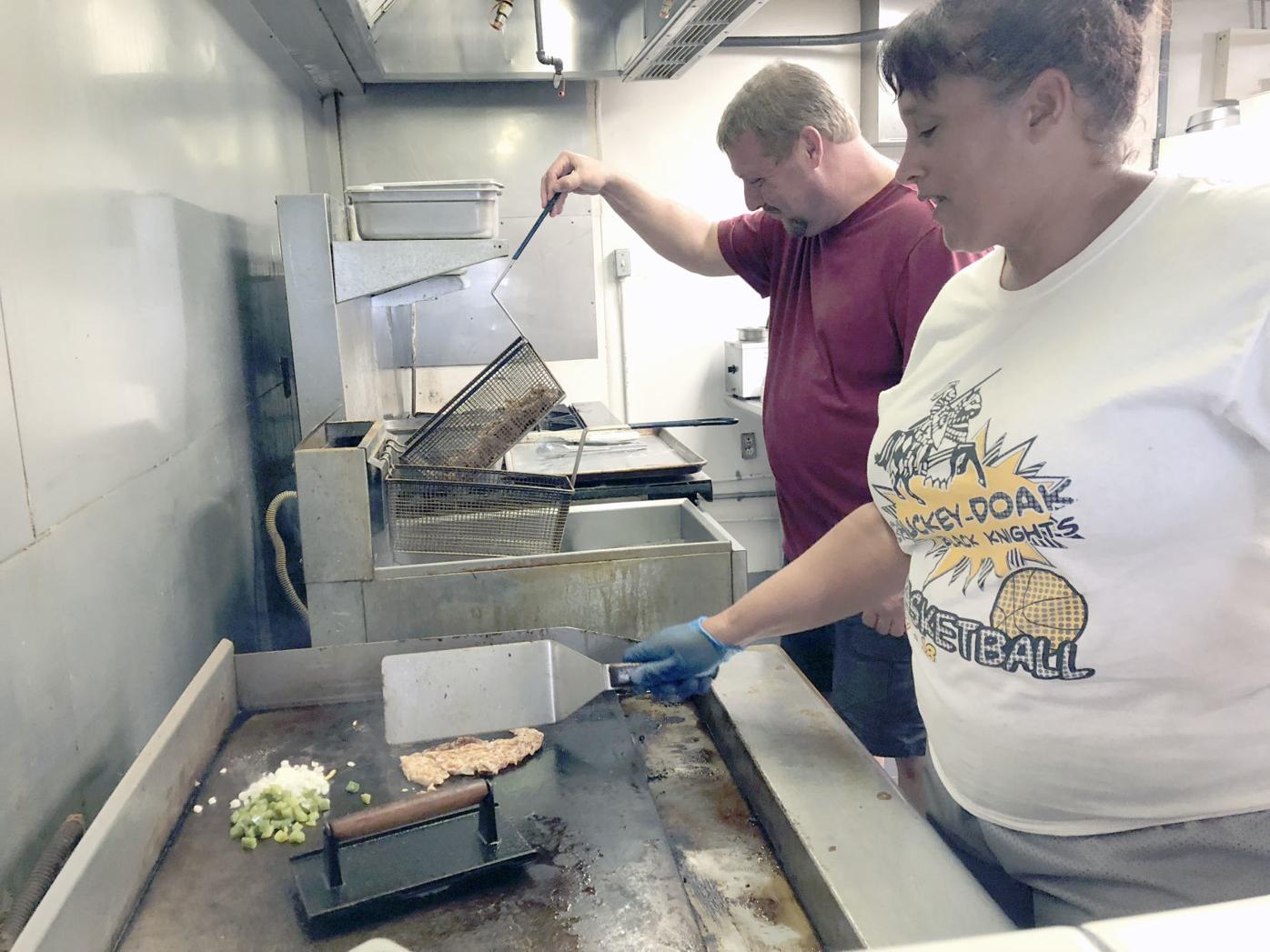 Brian Hixon, left, and Rebecca Shelton, right, work in the kitchen at Hix BBQ and Catering. Peppers, onions and chicken for a new menu item, a buffalo Philly chicken sandwich, are on the grill. 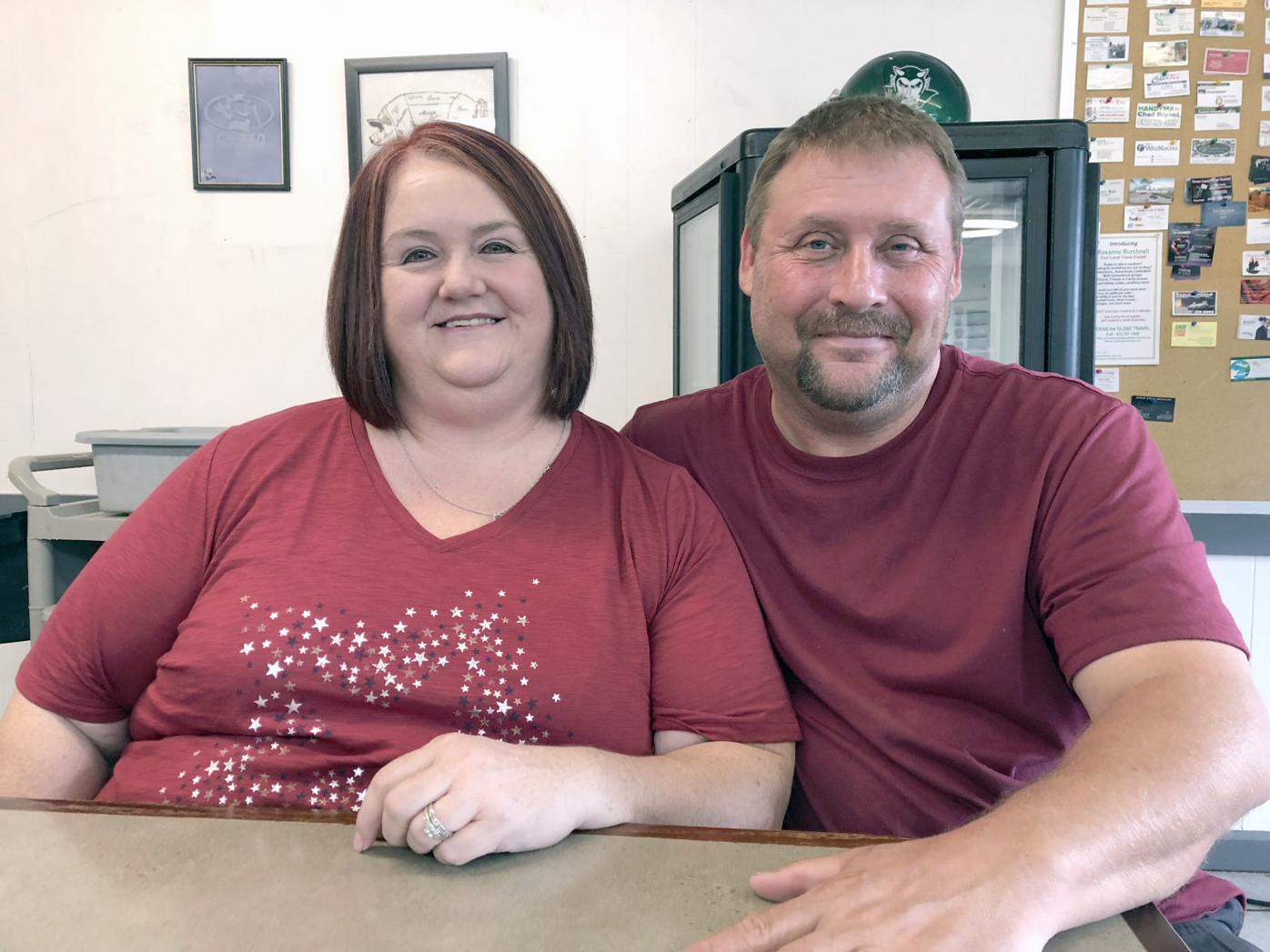 Angela and Brian Hixon have made a business — Hix BBQ and Catering — out of their love for family recipes. 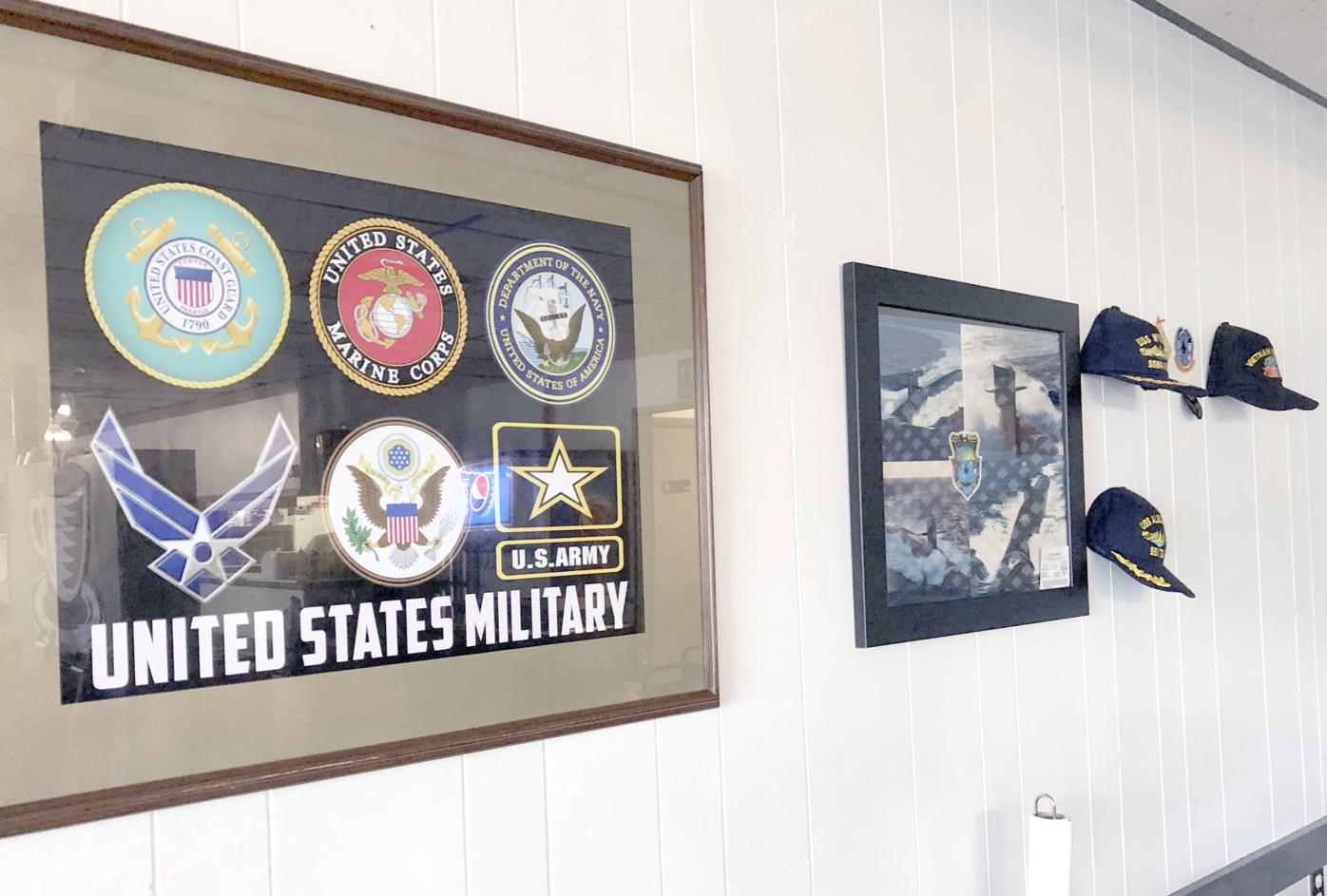 The Wall of Service at Hix BBQ and Catering honors military personnel, veterans and first responders. 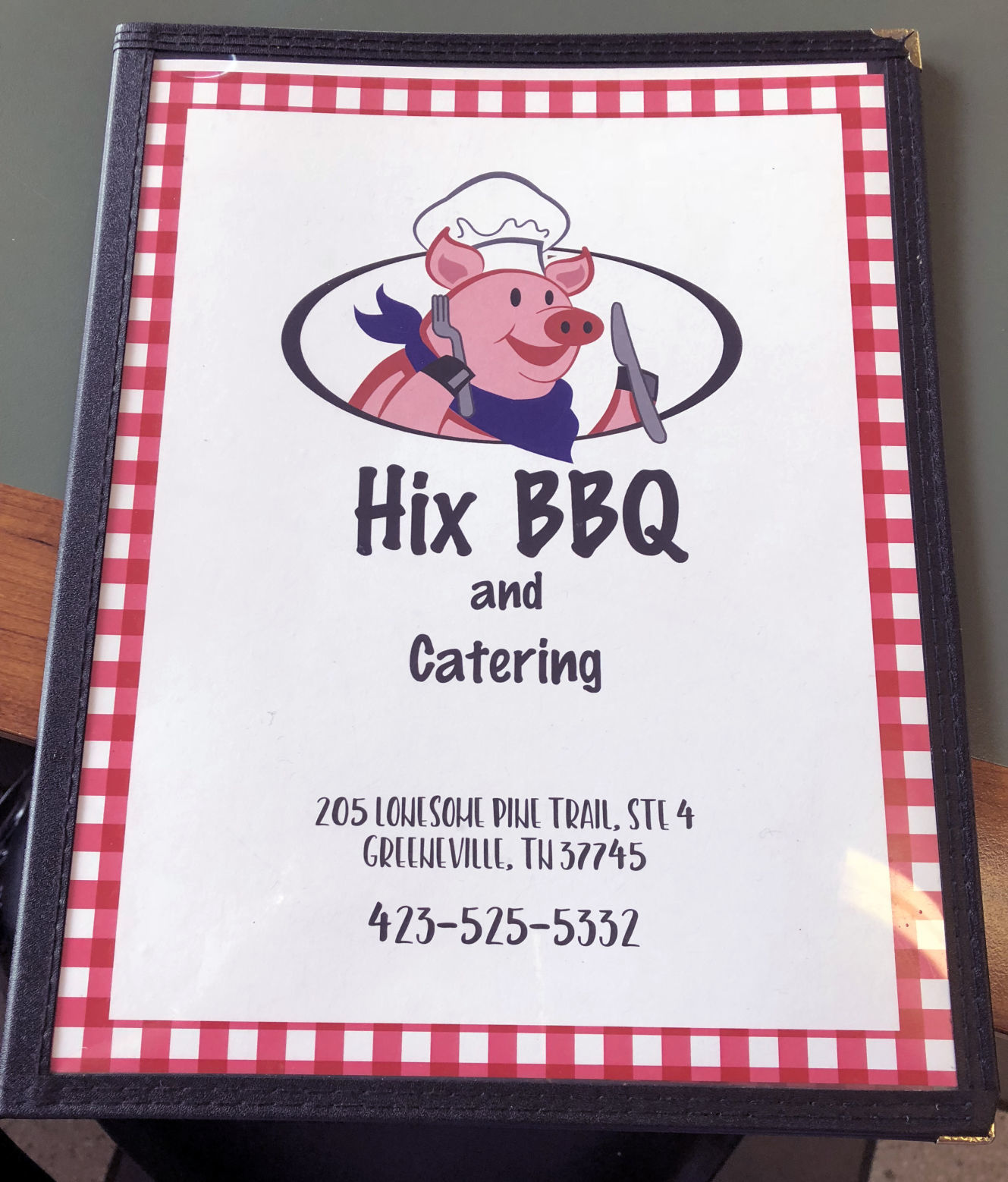 The menu for Hix BBQ and Catering, on Lonesome Pine Trail, is inspired by Brian and Angela Hixon’s family recipes.

Brian Hixon shows off a new chicken dish, topped with Hix BBQ and Catering’s barbecue sauce, and a side of broccoli and cheese.

Brian Hixon, left, and Rebecca Shelton, right, work in the kitchen at Hix BBQ and Catering. Peppers, onions and chicken for a new menu item, a buffalo Philly chicken sandwich, are on the grill.

Angela and Brian Hixon have made a business — Hix BBQ and Catering — out of their love for family recipes.

The Wall of Service at Hix BBQ and Catering honors military personnel, veterans and first responders.

The menu for Hix BBQ and Catering, on Lonesome Pine Trail, is inspired by Brian and Angela Hixon’s family recipes.

Brian and Angela Hixon haven’t always cooked for a living, but they both were exposed to good cooking and helping out in the kitchen at a very early age.

Now, the Hixons own their own restaurant, Hix BBQ & Catering, at 205 Lonesome Pine Trail.

Both were influenced in cooking by their parents and grandparents, and, as a result, most of the dishes they serve are family recipes. “Obviously,” said Brian, “they have been tweaked a little.”

He was about 5 years old when he started helping out in his grandparents’ kitchen — Margaret Hixon, of Blythewood, South Carolina, and the late Clyde Hixon.

“My grandfather owned his own, what we called ‘the shack,’” a service station he bought that had concrete pits, he said. “He cooked the whole hog and sold it by the pound. He served it over a plywood counter with a cash box and used old butcher’s paper to serve it in.” Favorite dishes from his grandmother were chicken livers and potato salad.

Similarly, Angela, a 1989 graduate of Chuckey-Doak High School, spent a lot of time in the kitchen helping her grandparents, the late Nina Hope, of Afton, and the late Hazellien Fannon, of Greeneville.

“I remember helping Grandmother Nina when I was 6 or 7 years old,” said Angela, explaining the types of duties she helped her disabled grandmother, Nina, complete, like “breaking beans, peeling potatoes, helping make salsa and helping in the garden. We use her recipes for summer salad, cole slaw, baked beans and Hawaiian cake here.”

A couple of years ago, when Angela was working in Johnson City and Brian was working in Bristol, Virginia, the couple were staying busy at their individual jobs, but Brian frequently cooked, and the idea for a catering business started to form.

When a pharmaceutical representative visited Angela’s work to host a barbecue luncheon, she wasn’t particularly impressed with the food and, instead, ate barbecue Brian had prepared for her for lunch. At her invitation, the drug rep tried a bite and suggested, “You need to open a business up and sell this.”

A short time later, the Hixons began using church kitchens in Johnson City to cook and cater from. When they reached upwards of 10 catering jobs a week, they decided it made sense to open up a place of their own.

Brian said it only made sense to open up in Angela’s hometown. About this same time, the building on the Lonesome Pine Trail — usually called Rogersville Road — became available.

“We could kill two birds with one stone — feed people at the restaurant and have a spacious place to cook for our catering,” Brian said.

The Hixons have used The Greeneville Sun and Facebook for advertising, and say that word of mouth has also helped grow their business. “We love it when someone comes in and puts a picture of our food on Facebook,” Angela said. “The baked potato topped with barbecue and chicken livers are certainly local favorites.”

Other customer favorites include hamburger steak, meatloaf and macaroni and cheese. The Butt Fry, which includes french fries plated with pork on top, shredded cheese, barbecue sauce, chives and sour cream, is another one of the most popular dishes.

As far as catering, the Hixons do events for private parties, businesses, reunions, gradations and more. They can feed from 10 to 500, and Brian said, have “gone as far as Harlan, Kentucky, to cater.”

The Hixons attribute their success to the quality of the ingredients and food they serve.

“We are not the cheapest,” said Brian, “but we try to do it better than everybody. We do use quality ingredients such as 100 percent Angus beef, all-beef chili, premium pork — butts not shoulders — and we don’t overcook.”

Brian shared that he has developed the restaurant’s barbecue sauces but had trouble initially because his “granddaddy always told him “you just use sauces to cover up a mistake.” For the Hixons, that’s proven to be untrue, but they present their barbecue sauce-free and let diners decide if they want it bare or topped with spices like regular barbecue sauce, mustard or hot-and-spicy.

“We want to present our barbecue, sandwich or plate with no sauce so you can taste the pork and add what you like. We just season with salt,” Brian said.

Brian’s favorite foods include spaghetti marinara — not out of a jar — and lima beans over rice, while Angela likes seafood of any kind, especially shrimp and Alaskan white fish.

While Brian prefers cooking in the kitchen, Angela loves the management side and working with their customers. “It’s important to connect with your customers,” Angela said, with Brian adding, “We don’t operate on just one-and-done. We want you to come back.”

Accordign to the Hixons, many regular customers are “just like family.”

The couple said they are proud of their restaurant’s “Wall of Service,” which is filled with photos and memorabilia from first responders and branches of the U.S. armed forces.

Brian explained the wall was started, because, at a very early age, he wanted to become a law enforcement officer serve in the military, which health issues prevented.

“But I want everyone to know we thank all of those in military and first responders for their service,” Brian said. “They all have dangerous jobs. While we run away from a situation, they are running towards it. Our military display is a tribute to World War II veterans and our family members who served.”

He added that several people helped put the wall displays together. Tim Lindstrom assisted by making the frames.

Hix BBQ and Catering is closed on Sunday and Monday, but its regular hours include:

Coming up the Hixons and their 15 employees will be offering new breakfast options and expanding the menu to include wraps and melts. New offerings include a buffalo Philly chicken sandwich that features shredded chicken with Provolone cheese, a mild Buffalo sauce and blue cheese crumbles.