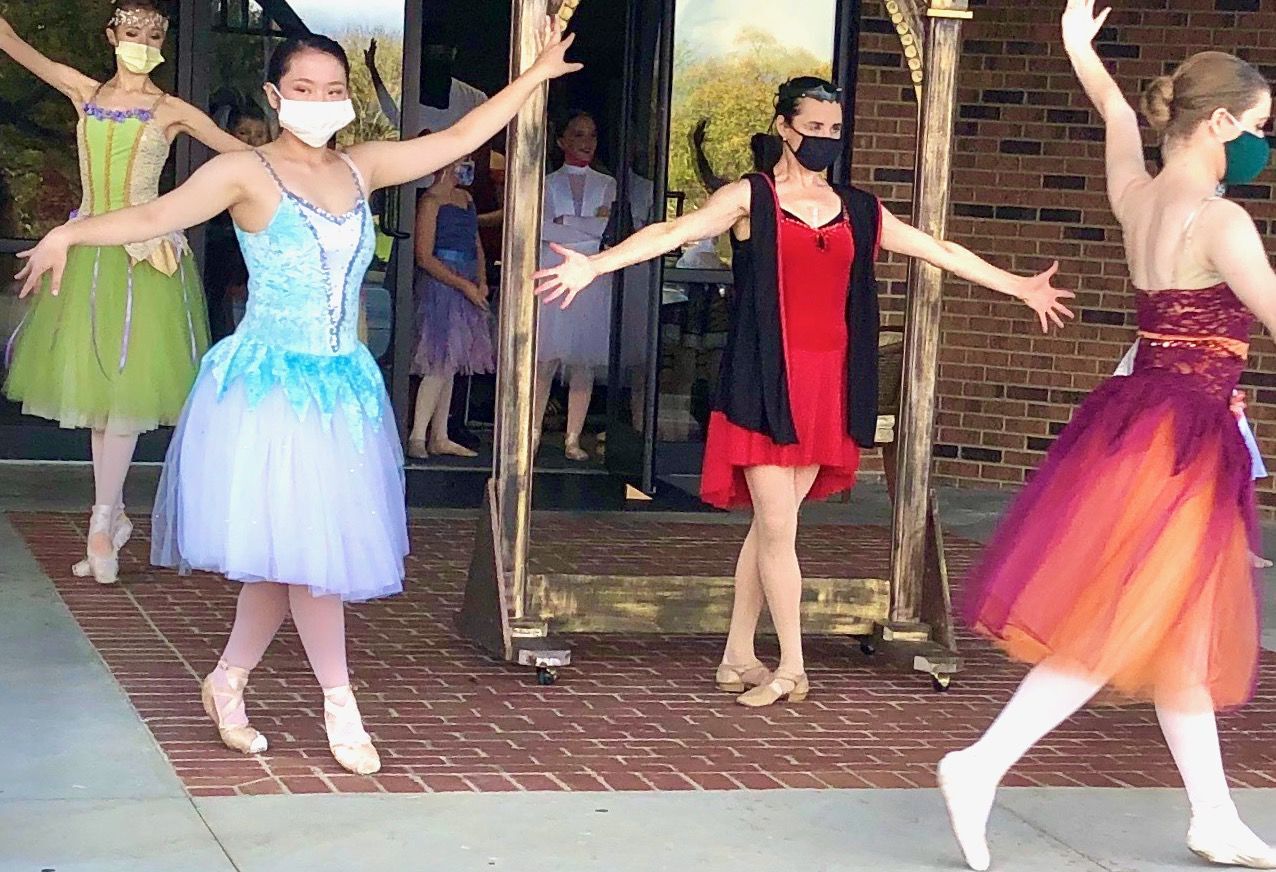 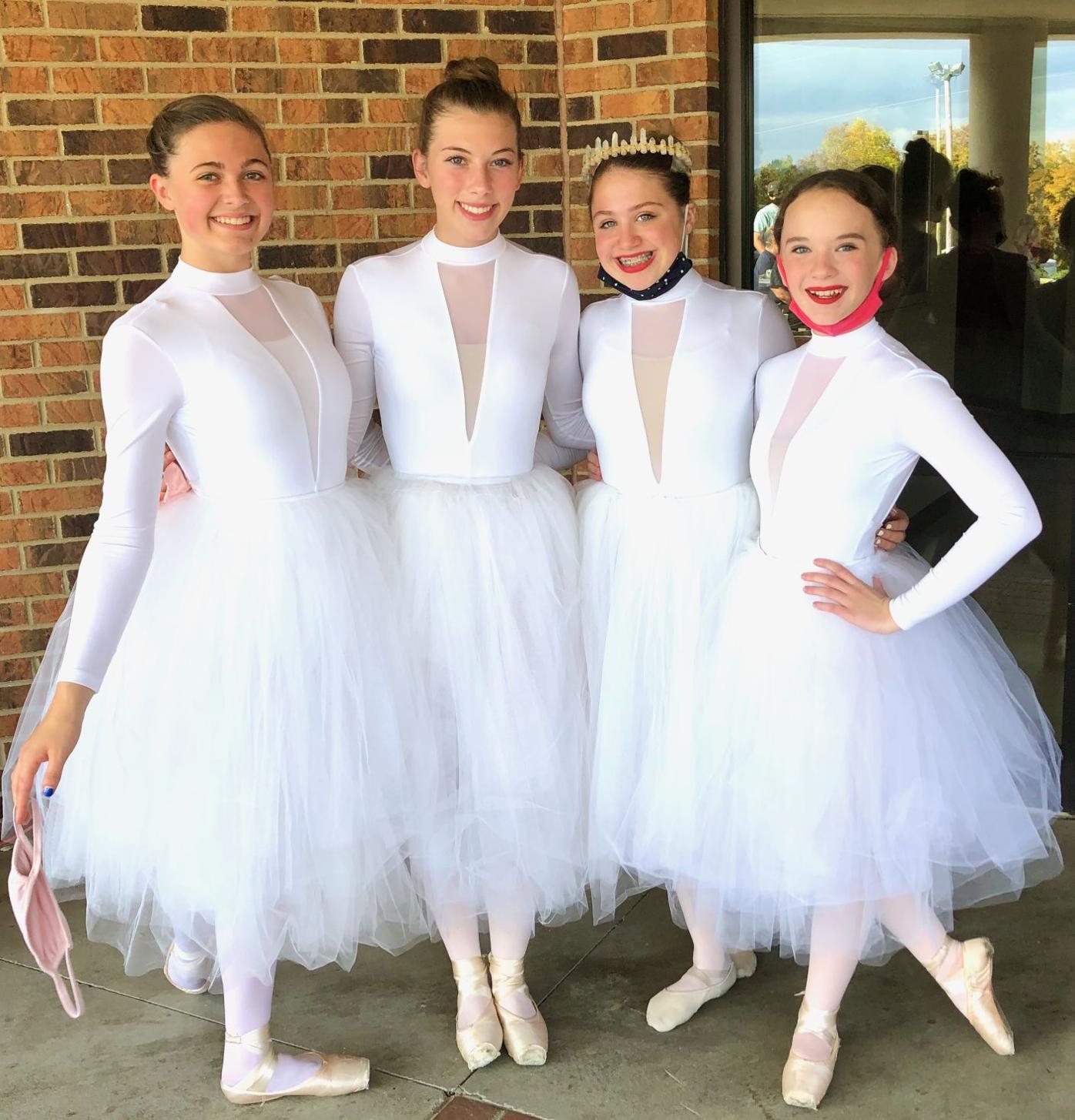 Central Ballet Company pose for a photo before an outdoor performance of “The Snow Queen.” The company will present the show at the Annie Hogan Byrd Auditorium Jan. 28-31. 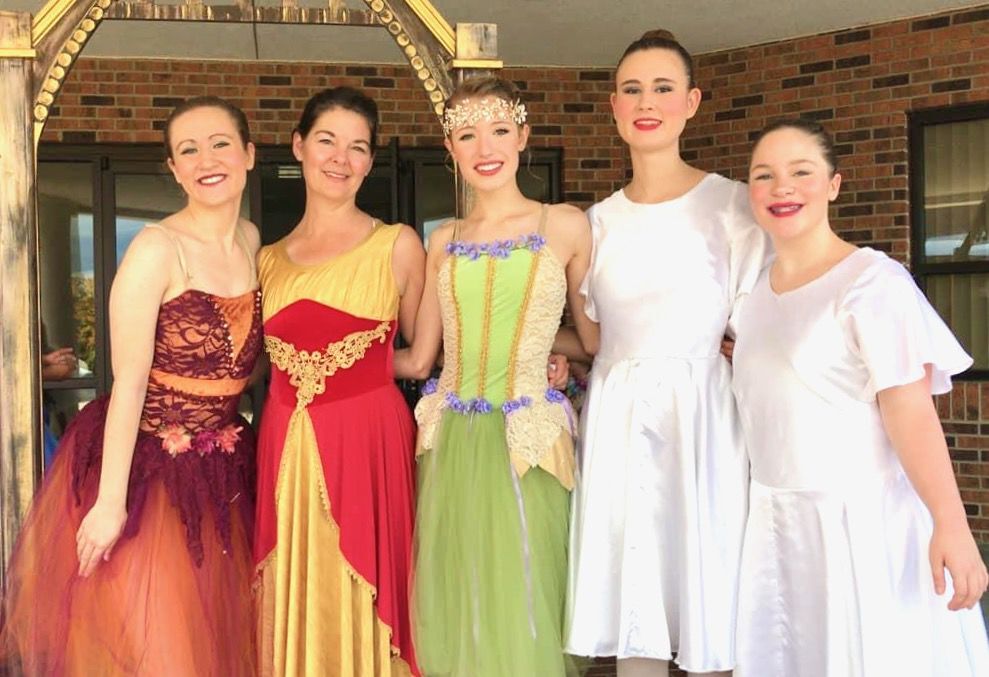 Dancers from Central Ballet Company pose for a photo before an outdoor performance of “The Snow Queen” in October 2020. From the left are Morgan Brink, Jennifer DeNay, Katy Higgins, Mara Phillips and Grace Carpenter. 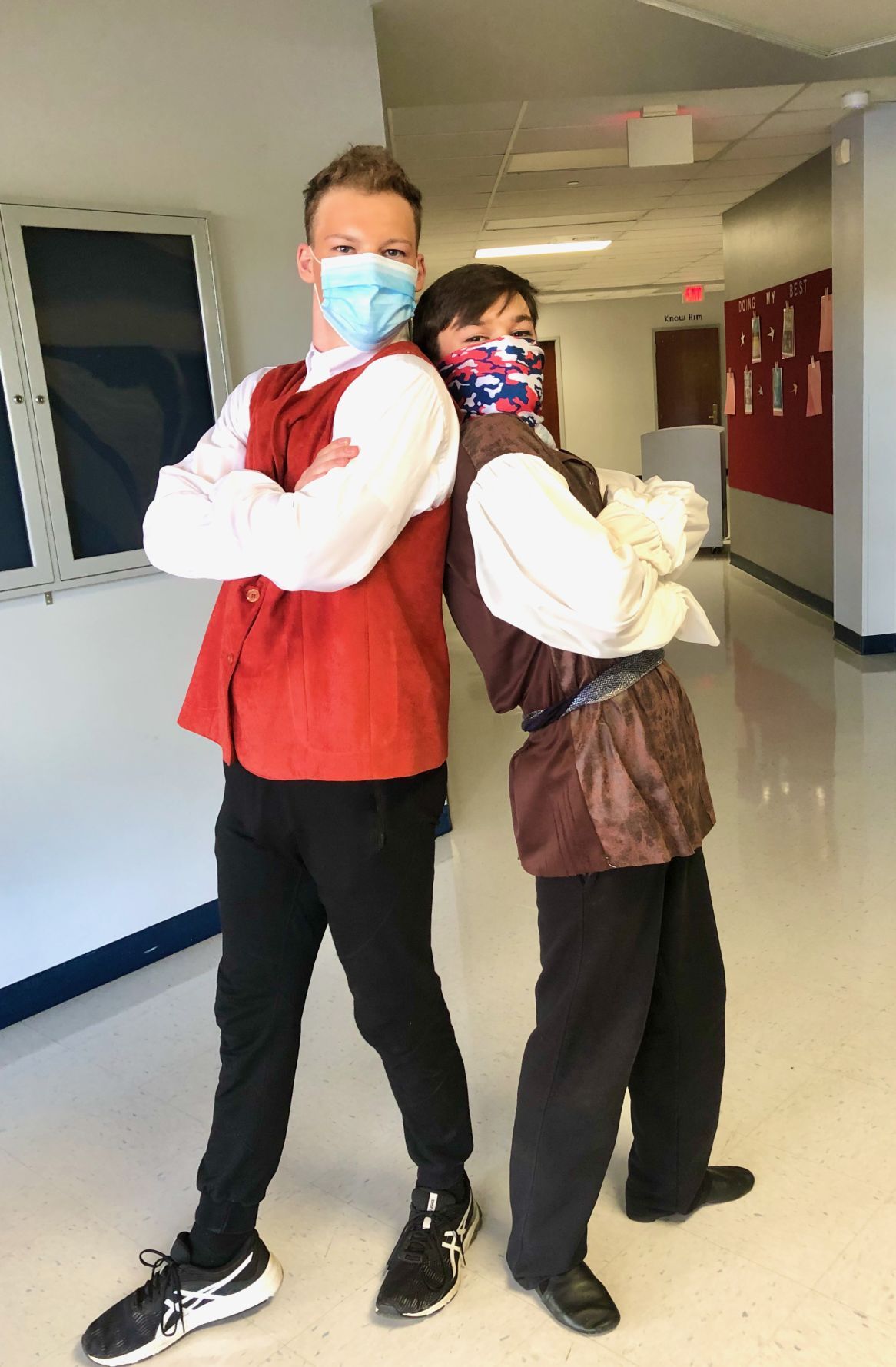 Calen Lewis and Craig Roberson of Central Ballet Company pose for a photo before an outdoor performance of “The Snow Queen” in October 2020. 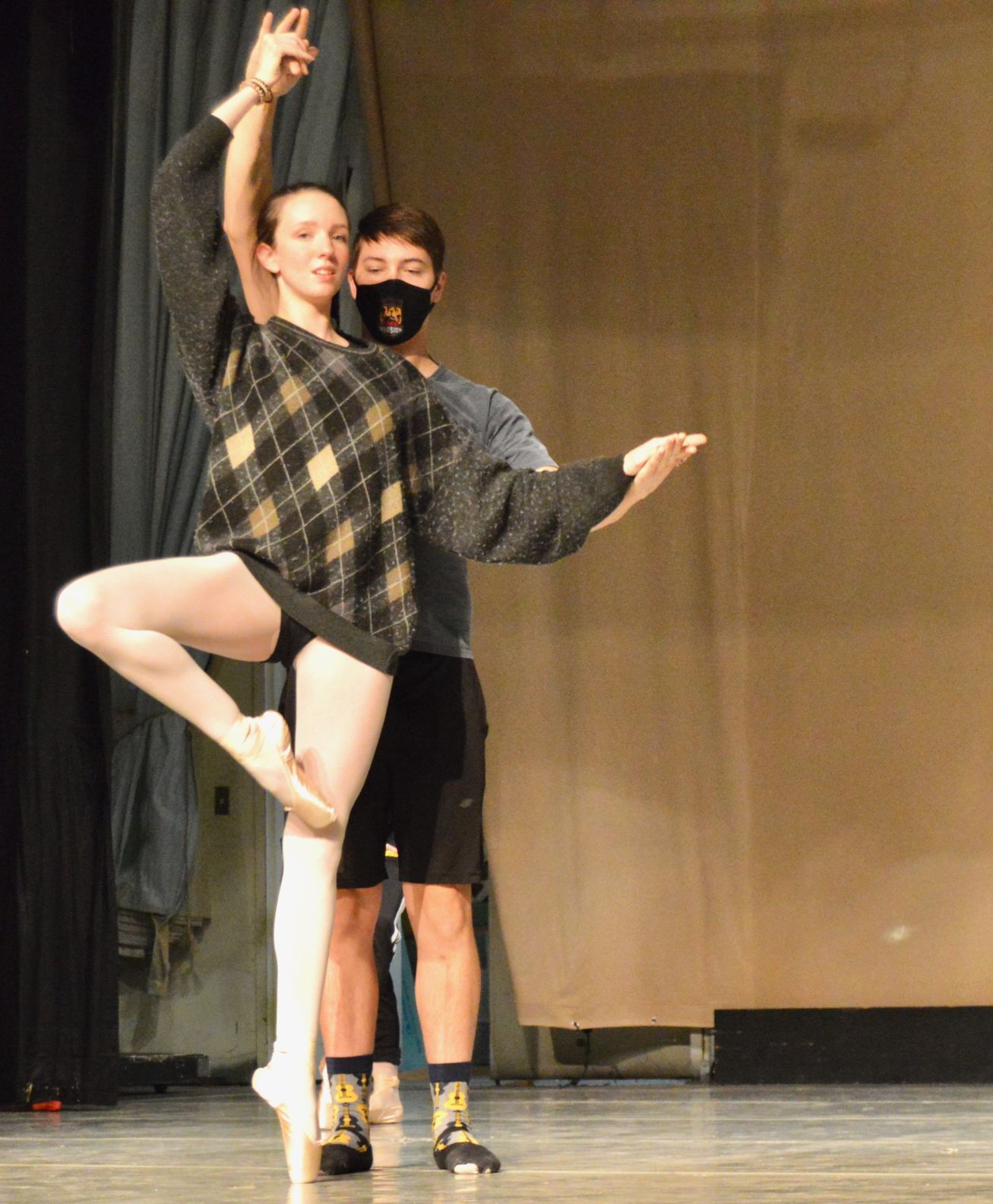 Central Ballet Theatre Dancers Eliza Weekly and Adrian Robertsen warm up before a rehearsal Saturday for “The Snow Queen: A Frozen Adventure” Jan. 28-31. 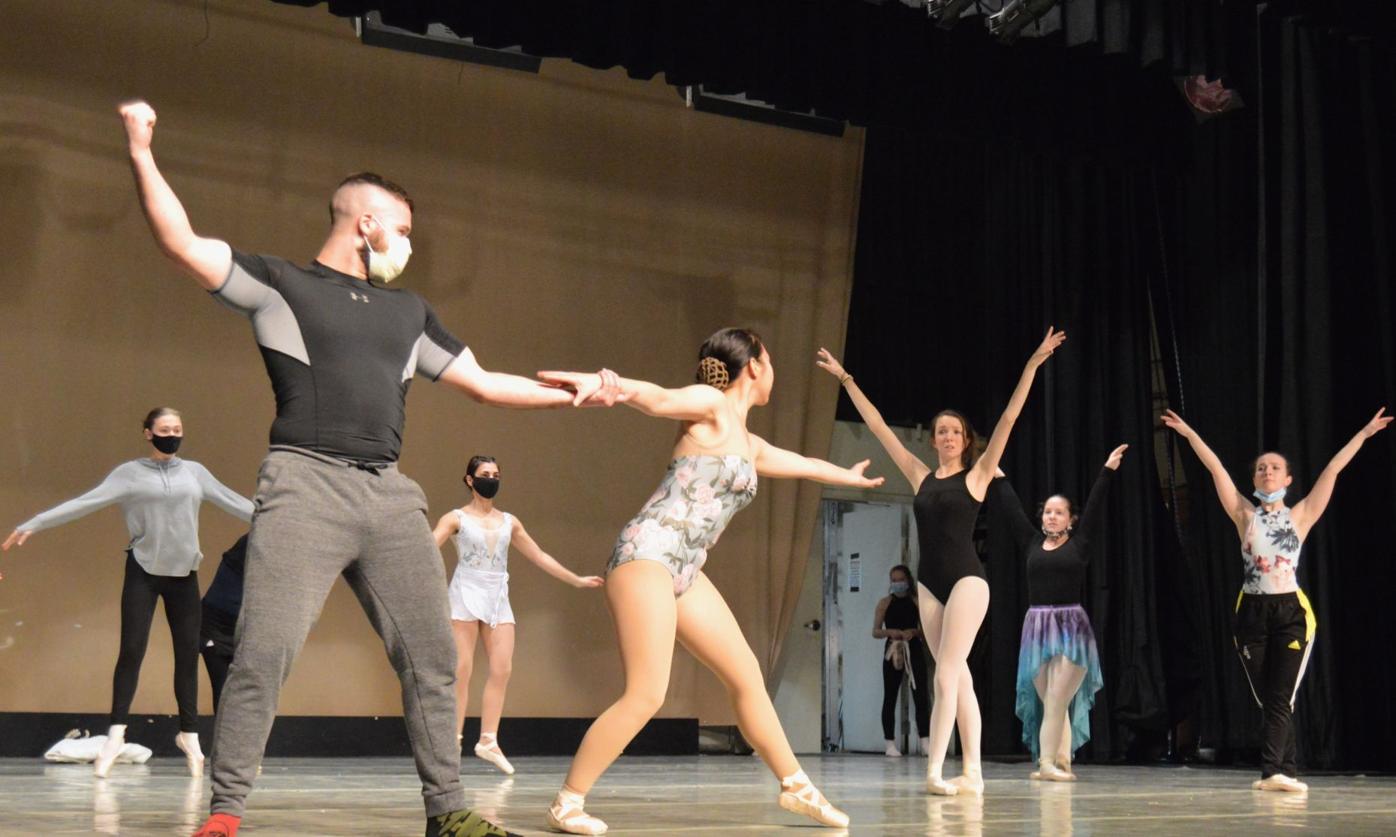 The cast of Central Ballet Theatre rehearses the “Snow Queen.” 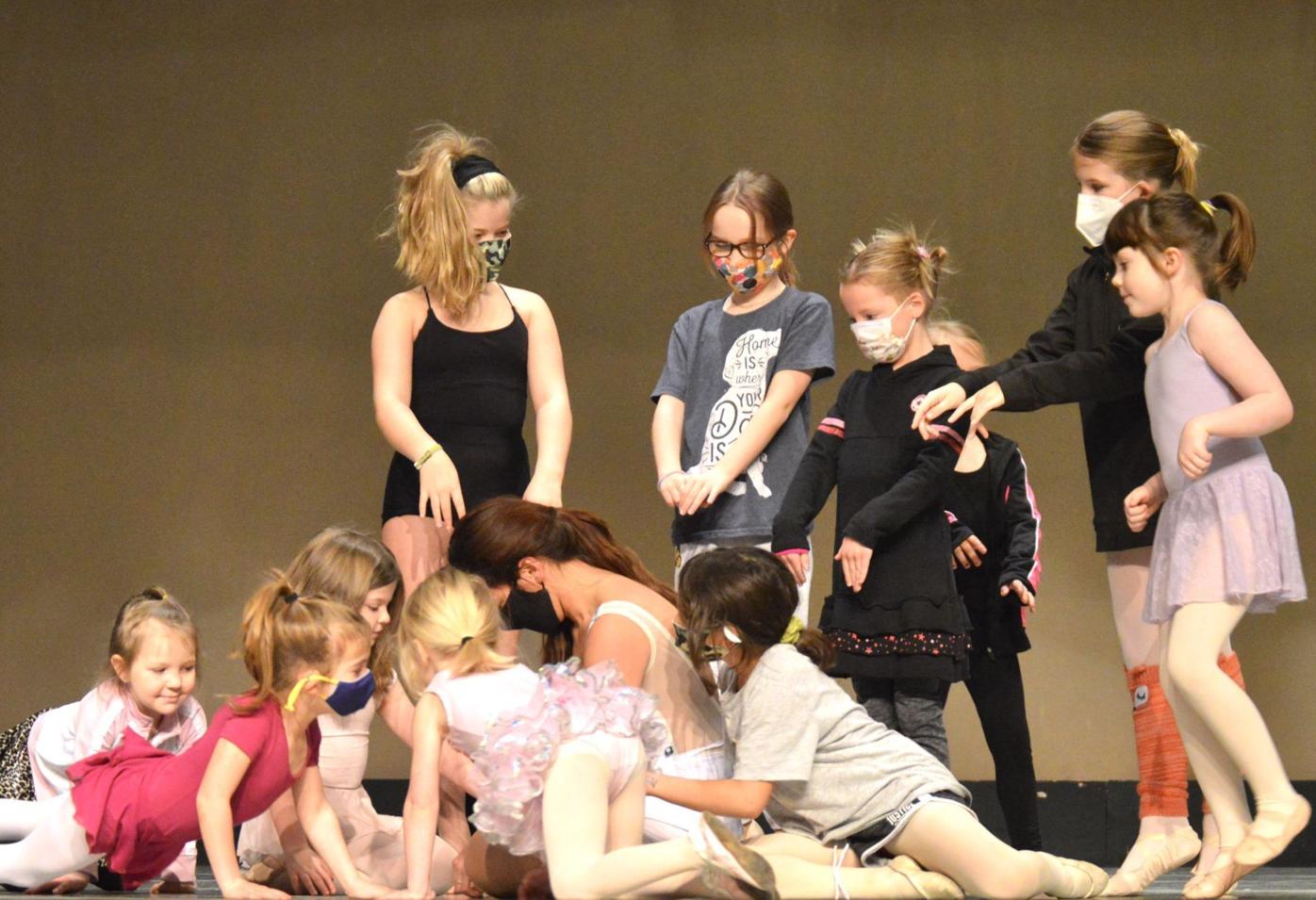 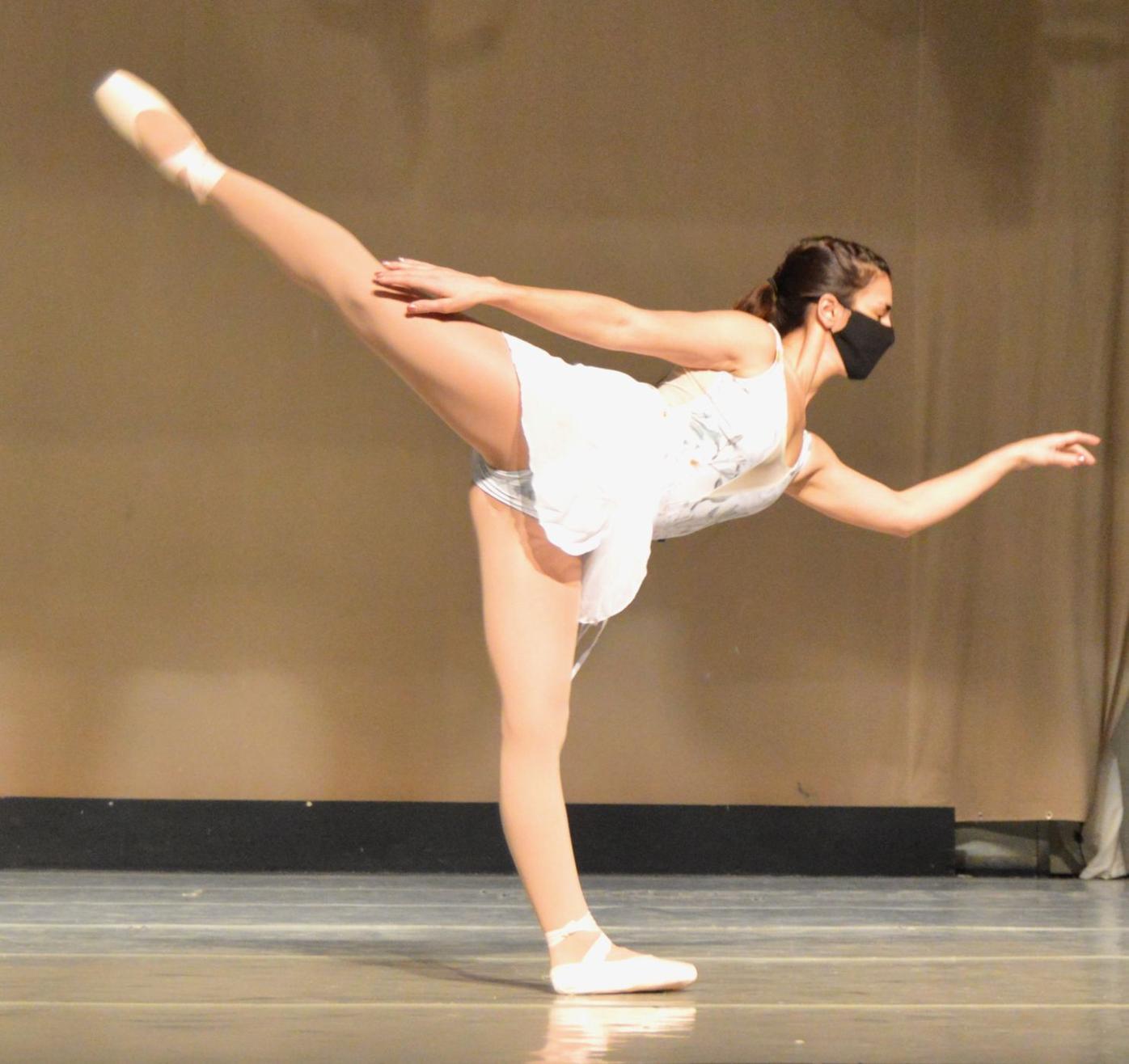 Elizabeth Sparks warms up before a rehearsal of “The Snow Queen: A Frpzen Adventure.”

Central Ballet Company pose for a photo before an outdoor performance of “The Snow Queen.” The company will present the show at the Annie Hogan Byrd Auditorium Jan. 28-31.

Dancers from Central Ballet Company pose for a photo before an outdoor performance of “The Snow Queen” in October 2020. From the left are Morgan Brink, Jennifer DeNay, Katy Higgins, Mara Phillips and Grace Carpenter.

Calen Lewis and Craig Roberson of Central Ballet Company pose for a photo before an outdoor performance of “The Snow Queen” in October 2020.

Central Ballet Theatre Dancers Eliza Weekly and Adrian Robertsen warm up before a rehearsal Saturday for “The Snow Queen: A Frozen Adventure” Jan. 28-31.

The cast of Central Ballet Theatre rehearses the “Snow Queen.”

Elizabeth Sparks warms up before a rehearsal of “The Snow Queen: A Frpzen Adventure.”

Amid the uncertainty and precautions of the pandemic, Central Ballet Theatre’s production of “The Snow Queen: A Frozen Adventure” will open Jan. 28, demonstrating, said Central Ballet Company Director Lori Ann Sparks, that the show — just as life — must go on.

Sparks said the production carries a message for the times: “Have I not commanded you? Be strong and courageous. Do not be frightened, and do not be dismayed, for the Lord your God is with you wherever you go.” Joshua 1:9.

“It is the commandment that God gives us to be strong and courageous,” said Sparks. “That’s one of the themes with Gerda, she goes through a hard trial to get to Kai to rescue him. God continually sends His help and guidance to be with her.

“That’s so appropriate for now. We’re all going through a trial with this pandemic. Life is so abnormal. But just knowing that the Lord tells us to be strong and courageous and keep going. Trust him.”

CBT’s ballet production is taken from the story of Hans Christian Andersen’s book “The Snow Queen.” The Disney movie “Frozen 2,” is loosely taken from the same story. The ballet portrays how the faithfulness of true love can reclaim the lives of those lost in deception, a release says.

Rehearsals for the production began in August with COVID-19 precautions in place. Sparks said the pandemic made preparing for the show challenging.

“It really has impacted us a lot,” Sparks said. “We have had to be so careful, wearing the masks, social distancing. At first, we weren’t even partnering, which is where two people dance together, and when we started doing that, we made sure we were wearing masks. We also were limiting the size of who was coming.

“I had to add a bunch of classes so my classes would meet limitations. Instead of doing week-day rehearsals, we were only doing Saturdays so I was there eight hours a day, trying to split people up so that we weren’t in such a large grouping.”

Sparks said the precautions have been challenging for the dancers but it has been well worth the effort.

“They’ve been really careful,” Sparks said. “But they have so much enjoyed being at the studio and working on this that I just couldn’t take that away from them. I think it has really helped the kids (through this time). That’s the thing that really kept me going, seeing the happy faces there at the studio.”

Sparks and the CBT board worried about whether they would have a show or not, due to the pandemic. Tickets sales would have been cut drastically to keep audiences socially distanced from each other, had Tusculum University not allowed the company to add two additional shows to compensate for the smaller audiences.

“It’s been different for us in terms of how the board has to approach the show this year but we still have a lot of really good donors, which has been such a blessing for us, so we’re going to keep going forward,” said Sparks.

As the show begins, Winter, the season, is attracted to the images cast forth by the magical mirror of deception created by Lucifer. When the mirror is broken, Lucifer stabs winter in the heart with a sliver of this magical mirror. This act turns her heart ice cold. He blows fragments of the mirror into her eyes turning her into the Snow Queen, who hates anyone born of true beauty.

The Snow Queen hears the boastful remark of a young Kai threatening to put the Snow Queen on the stove and melt her. As the Snow Queen watches Kai and Gerda’s growing relationship of true love, she decides to strike Kai’s heart with coldness.

The dark Snow Queen captures Kai and whisks him away to her ice palace in the north. Gerda travels to find her beloved Kai.

Through the story, the audience experiences Gerda’s travel through spring, summer, autumn, overcoming fears and temptations within each season, and finally, to the cold northern ice palace to find Kai and return home with him. Will Kai be released to return to the land of life with Gerda, or will he remain frozen and heartless in the land of the Queen?

Closely following the storyline of Hans Christian Andersen, there are many encounters where God is invoked to take part. From the opening scene, audience members can compare Lucifer, who designs a mirror that distorts beauty and love while making evil look promising, to Satan, the prideful boaster who desires to be God, a release says.

Throughout the ballet, viewers witness Gerda’s prayers for guidance, which result in receiving divine help, whether through the angelic spirit of her departed Mother, God’s creatures such as the Raven, or to the multitude of guardian angels.

At one point during the ballet, Gerda, during a great struggle to proceed, finds she does not have the strength to go on. Falling to her knees, she recites The Lord’s Prayer. As she does, each puff of smoke from her breath becomes an angel sent to protect her.

Returning again to CBT’s stage is Dillon Davis from Chattanooga Ballet to play the lead role of Kai. Dillon started his professional career as a trainee at Alabama Ballet under the direction of Wes Chapman. He later attended the highly respected Central Pennsylvania Youth Ballet under the tutelage of Marcia Dale Weary.

After completing his training at CPYB, Dillon performed professionally with Nashville Ballet and Dance Theater of Tennessee dancing various soloist roles such as Escamillo in Carmen, Peter in The Diary of Anne Frank, the jester in Cinderella, and Franz in Coppélia. While with Dance Theater of Tennessee, he had the opportunity to work with world renowned choreographers Ma Cong, Darrell Grand-Moultrie and Ron De Jesus of Hubbard Street. Dillon is excited to be in his 6th season with Chattanooga Ballet.

Tusculum University has allowed Central Ballet Theatre to continue its performances under strict Covid-19 requirements. Limited tickets and seating are open to the public. Shows are slated for Jan 28, 29, 30, & 31 at 7 p.m. and Jan 30 &31 at 2 p.m. Tickets may be purchased at Central Ballet Studio, 120 W Summer St, Greeneville. Call 423-724-7014 for more information.