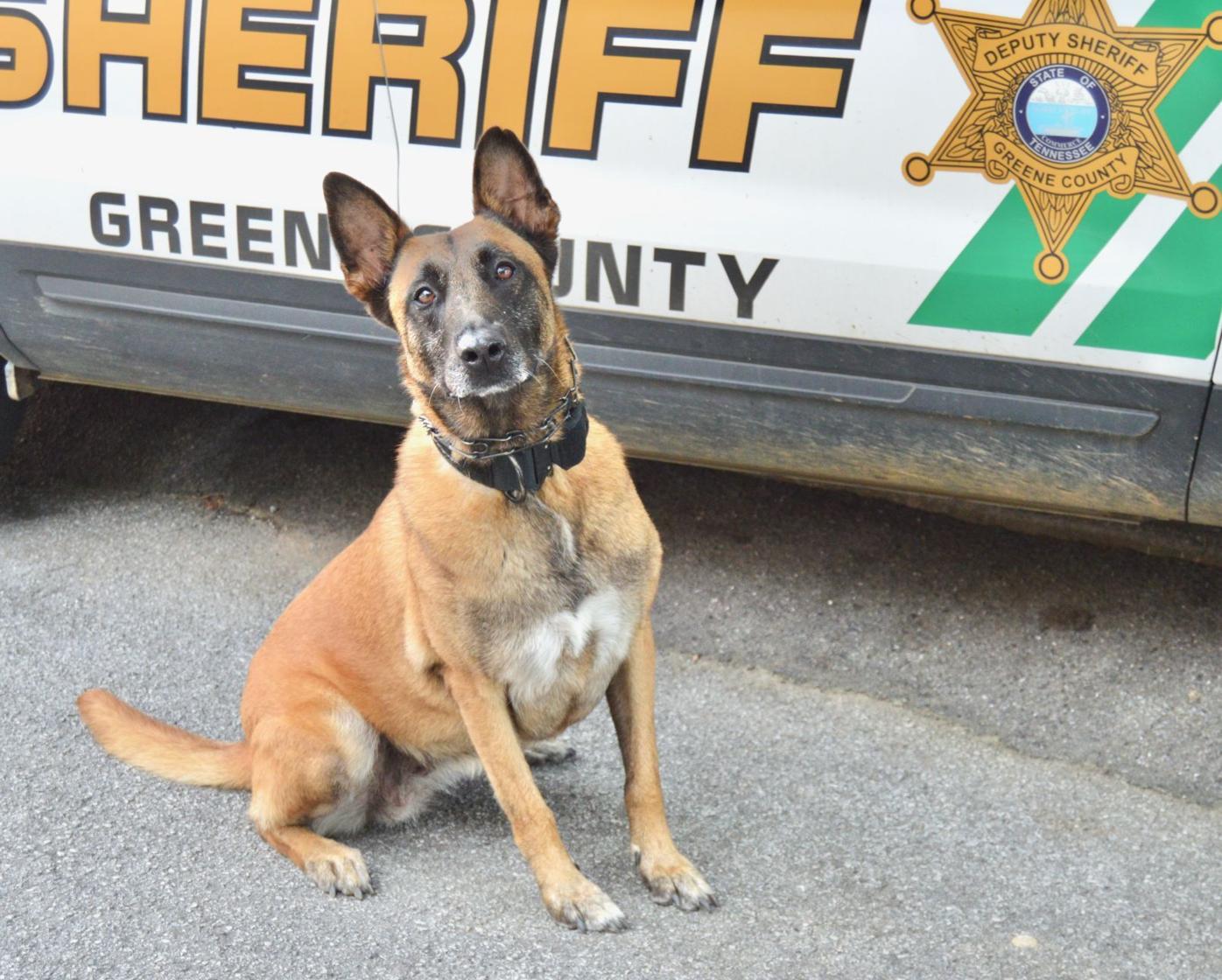 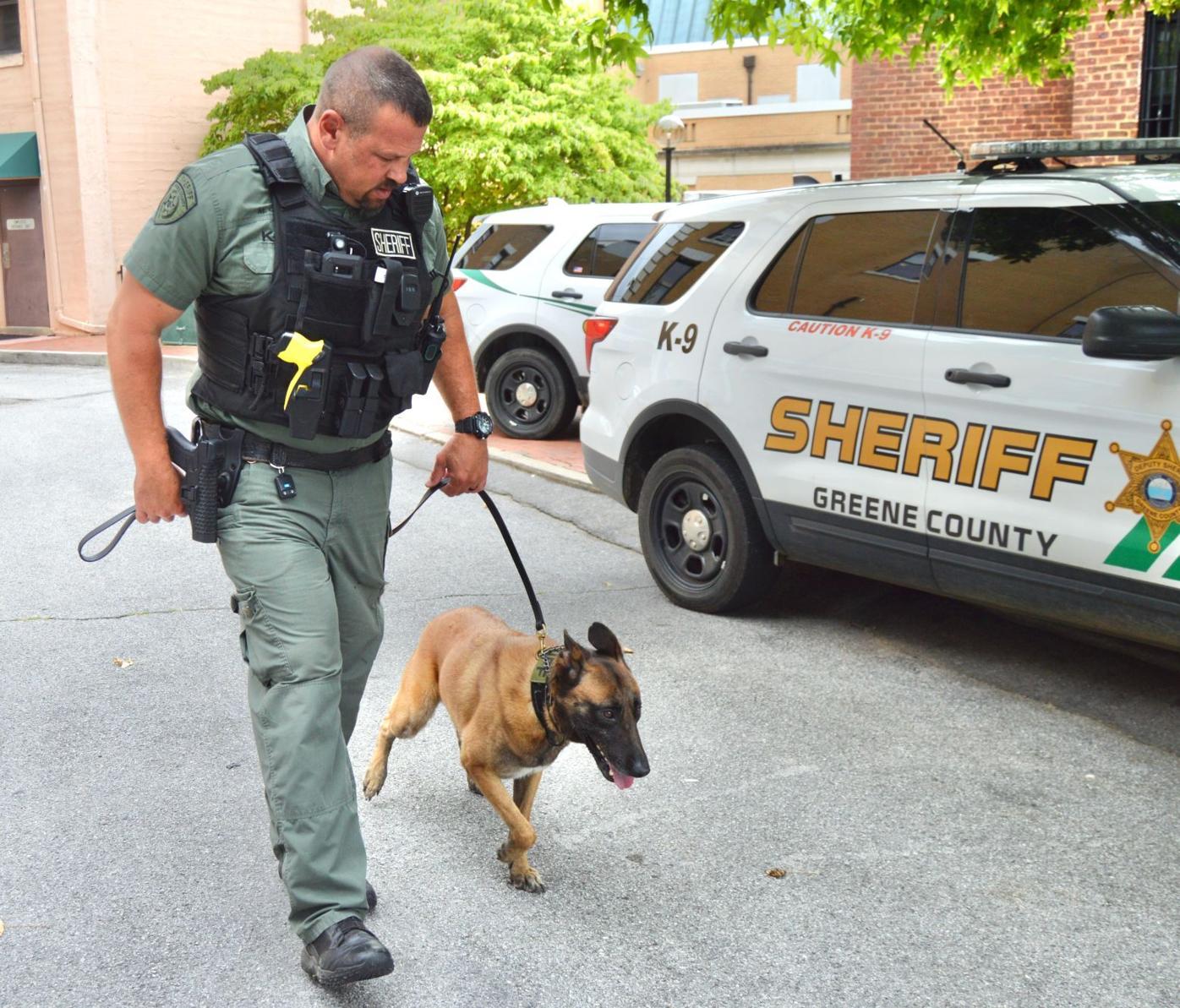 K9 Matti, a 4 ½-year-old Belgian Malinois, and her handler Deputy Mark Crum make up one of the six K9 teams of the Greene County Sheriff’s Department. 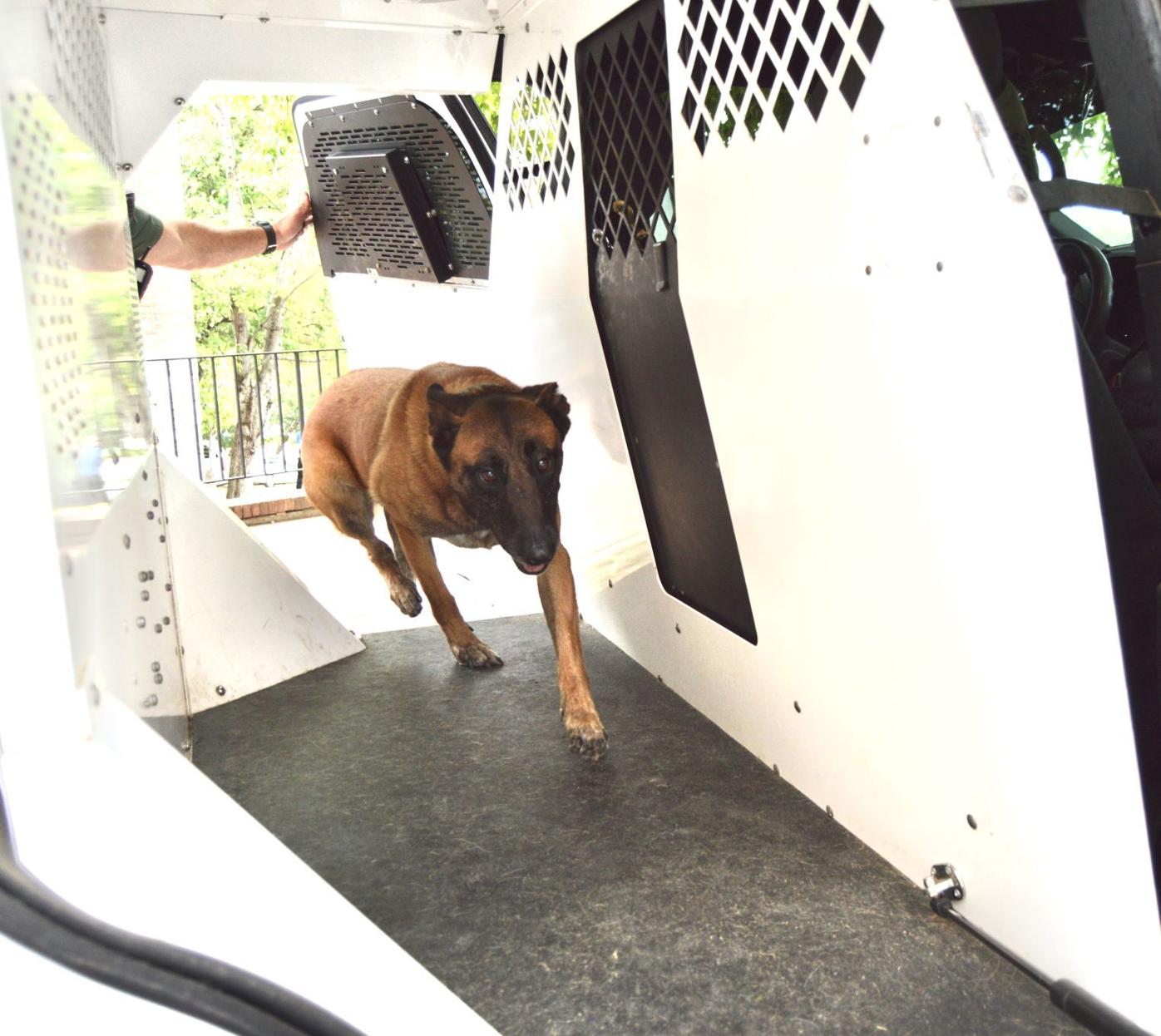 K9 Matti gets into her patrol vehicle. The vehicle has a spacious area for the dog to ride and is equipped with numerous devices to ensure her safety, including a heat sensor. 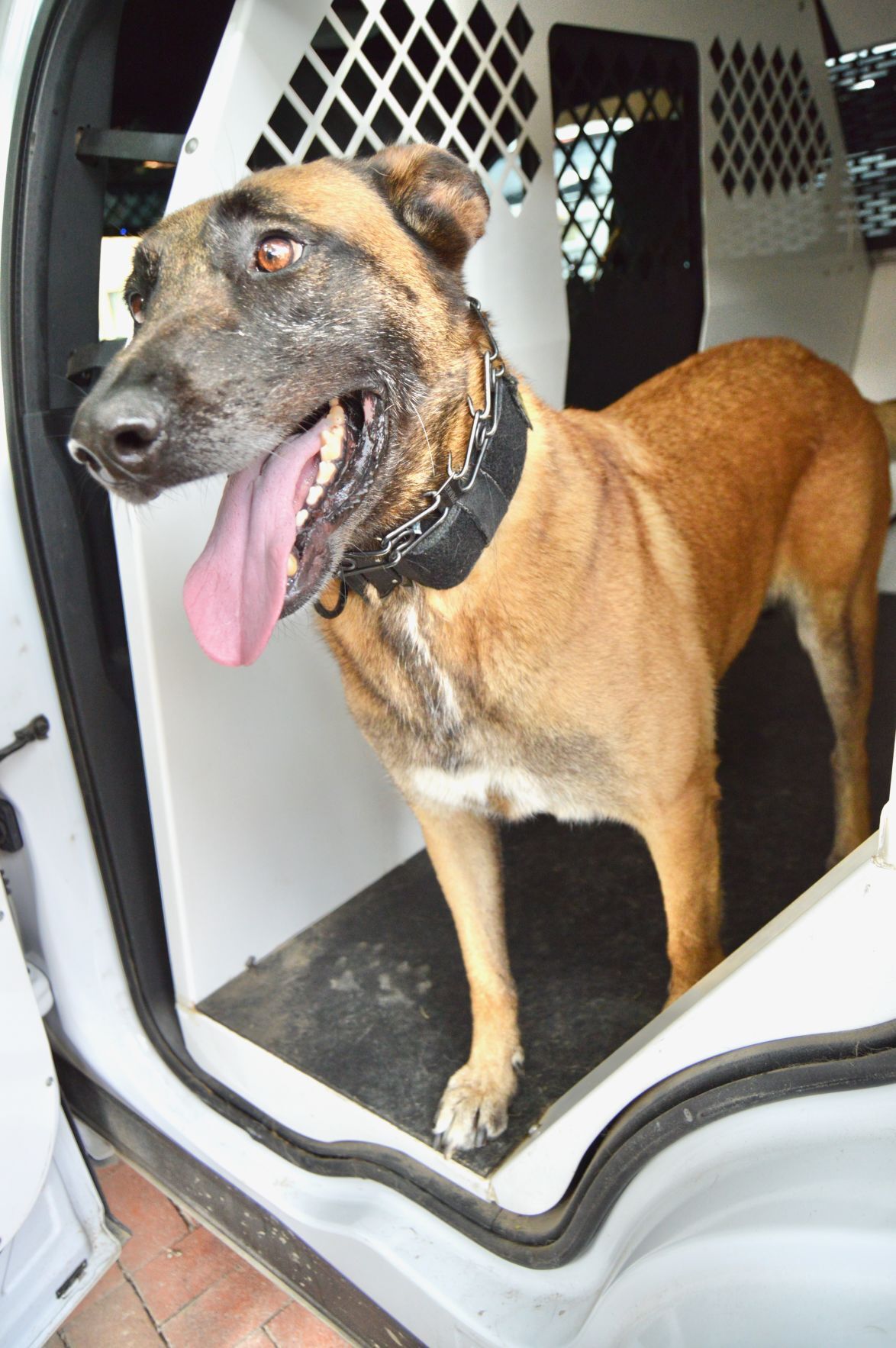 K9 Matti, a 4 ½-year-old Belgian Malinois, and her handler Deputy Mark Crum make up one of the six K9 teams of the Greene County Sheriff’s Department.

K9 Matti gets into her patrol vehicle. The vehicle has a spacious area for the dog to ride and is equipped with numerous devices to ensure her safety, including a heat sensor.

Patriots come in all shapes and sizes — and some come with paws.

K9 Matti, a 4 ½-year-old Belgian Malinois, and her handler Deputy Mark Crum make up one of the six K9 teams of the Greene County Sheriff’s Department. Crum, who has worked with a K9 partner for the last seven of the 20 years he has served on the department, said K9s are invaluable in police work.

“If you work a dog, you’re going to have numerous felony arrests from your dog,” said Crum, who recently received a promotion and will begin wearing the rank of sergeant on Sept. 16. “You’re taking drugs off the street. You’re taking the drug dealer’s money away from them and it’s going back toward the dogs and the community and the department. It’s an asset.”

Finding illegal drugs during traffic stops poses more challenges than ever. K9s, with their sensitive noses, can detect what deputies only suspect.

“People are wising up on traffic stops now,” said Crum. “They’re hiding their illegal drugs better. They’ll try to hide their drugs in laundry detergent. They’ll try to stick them in burgers and stuff. My dog does not eat human food. If you laid it down right now and offered it to her, she wouldn’t touch it. If they try to disguise the drugs in that, she’s not going to smell the cheese burger. She’s trained to find the drugs.

“We can smell marijuana but to a dog it is so much different, what they’re smelling. They’re breaking it down to the molecules. They’re smelling the components. If a dog was trained to alert on a pizza, they could tell you what all is on the pizza. That’s how they’re trained.”

Once a K9 officer alerts to drugs, their human counterparts can then go into the vehicle and physically search for them and make an arrest. Sometimes the mere presence of a K9 is enough to change a suspect’s mind about refusing a search.

“A lot of times, if we have a traffic stop and for some reason believe the person is impaired, they’ll say, ‘No, I don’t want you to search my vehicle.’ When they see the K9s pulling up they say, ‘OK, go ahead and search.’ That’s the reputation that our dogs have here in Greene County. The criminal element that we deal with know every one of our dogs. They know that they’re good dogs. They make good cases in court.

“We’ve seized multiple vehicles, weapons, pounds of methamphetamine and tens of thousands of dollars worth of cash, assets and property. If we can get those drugs and that cash off the street, it slows it down. Maybe that next person won’t get that fix that they might overdose on.”

K9s also provide additional safety for officers, which can be especially important in a large, rural setting like Greene County.

“My back up could be 30-40 minutes away, depending on where I’m at in the county,” Crum explained. “So if I go to a domestic, for example, we have a door popper we wear on our duty vests. If it goes real bad for me on a call, I just hit this button here and my door comes open. When that door comes open on a call, she’s coming to me and she’s coming hard. It’s handler protection at that point. That’s one of the things she’s been trained in.”

Matti and the other GCSD K9s are also trained to track and apprehend suspects, which Matti recently demonstrated when an inmate attempted to run from a work detail. Lt. Mike Fincher described the event.

“The guy decided to run off through the city,” Fincher said. “Even though he was out working a job, he’s still in custody so that’s considered escape. He absconded from custody. Mark and his K9 were fortunately very close and, with the help of the city police department, he and Matti were able to get on the track and within 10-15 minutes we had the inmate back in custody. The inmate actually heard the dog coming and gave up.”

“There was an outbuilding we couldn’t see under and she started pulling harder and harder,” Crum added. “I think her eyes were locked into his and they could see each other because within 10-15 yards his hands came out and he said, “I’m here! I’m here! You got me.”

For Crum, working on a K9 team is the ultimate fulfilment of his childhood dream to work in law enforcement and make a difference in Greene County.

“I just wanted to try to put a dent in the drugs,” he said. “That’s really my focus. That’s what led me to wanting a narcotics dog. I’ve always had dogs. I’m a dog lover. I thought, If I can have a dog with me to go to work every day, why not? That would be the greatest job ever. If you really love K9s, that’s the best thing ever having that dog right there.”

Having a K9 partner has an added bonus.

“You can tell that dog every one of your problems and they’re not going to tell anyone anything,” Crum said.

Indeed, the bond between Crum and Matti is mutual. She checks on her partner before eating and has refused to eat when he is away. But it didn’t start out that way. When they were first introduced, she eyed him suspiciously and bared her teeth.

“It took close to three weeks before we could get that (bonding started),” Crum said, explaining that each K9 and handler must go through a rigorous eight-week training program before they can patrol as a working team. “When it was getting near the fourth, fifth, sixth weeks, she would just lay her head right next to me driving down the road. It happened fairly quick for me and her. She is a female and I think the females tend to get a stronger bond to you. All the guys have great dogs that do the job but Matti for some reason seems to worry about me first and then takes care of other stuff later.”

But K9’s don’t just protect their handlers. These pawed patriots work hard to protect the communities they serve.

“These dogs are here to protect and serve, just like we do,” said Crum. “To a lot of people, she might be just a dog. To me, she’s my partner.

“The risk for the dog is equal to the risk for us. They are deputies. In the job that we do, you never know. There’s not a routine call. There are the same types of calls but every call is different. You can go from a traffic stop to a domestic to a gun call to a civil matter. You never know what you’re going to face in this job.”

“Those K9s risk their lives every shift that they work,” added Fincher. “You couldn’t ask anybody to be more patriotic than that, in my opinion.”