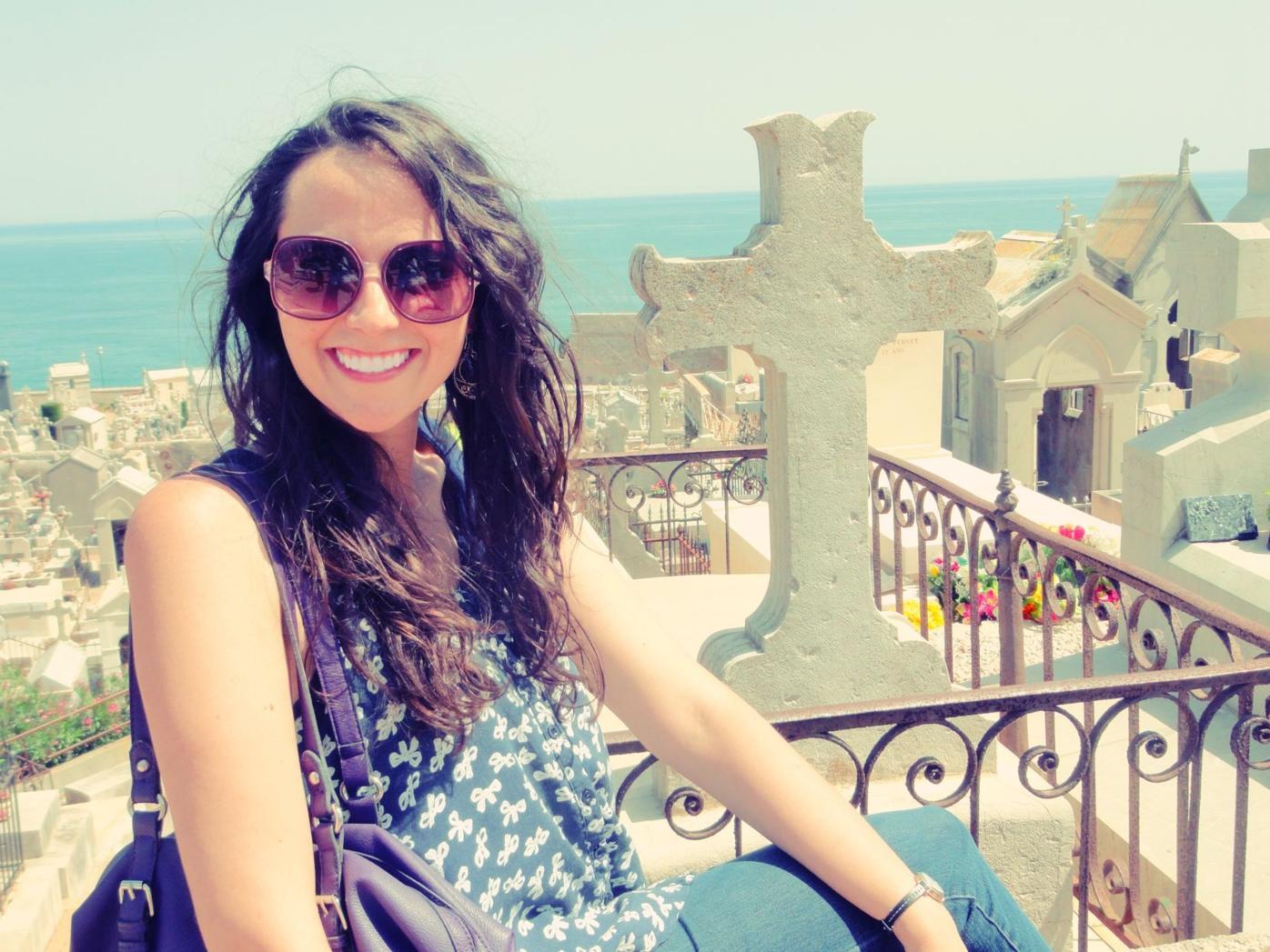 VV pauses for a photo In the Cimetière Marin in Sète, France, made famous in Paul Valéry’s poem of the same name. She is not wearing “the cursed pants,” as they are pajama pants and VV does not wear those in public. 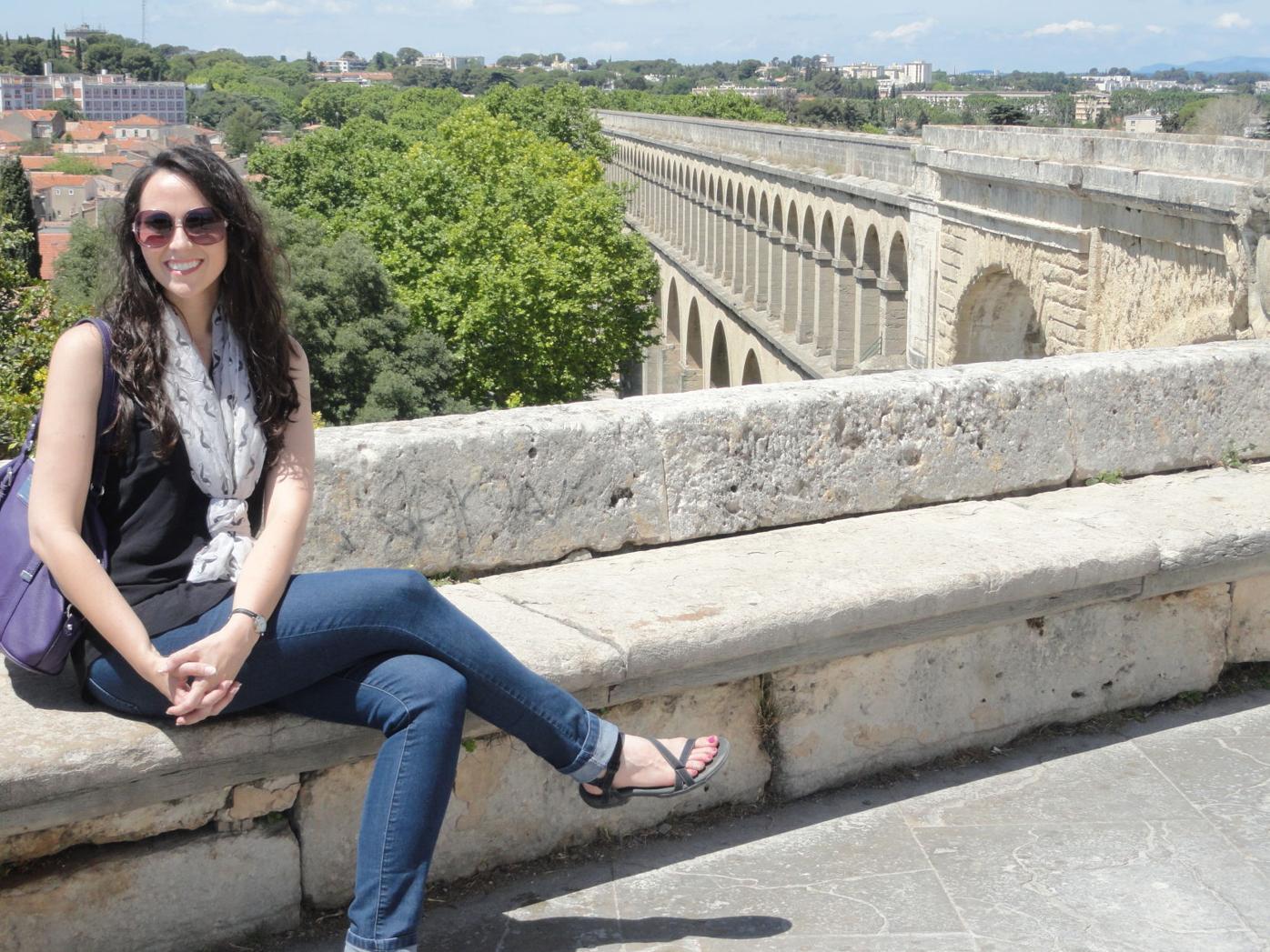 VV sits with the 18th century Saint-Clément Aqueduct in Montpellier, France, in the background. She is not wearing “the cursed pants” in this photo either.

VV pauses for a photo In the Cimetière Marin in Sète, France, made famous in Paul Valéry’s poem of the same name. She is not wearing “the cursed pants,” as they are pajama pants and VV does not wear those in public.

VV sits with the 18th century Saint-Clément Aqueduct in Montpellier, France, in the background. She is not wearing “the cursed pants” in this photo either.

Author’s note: As much as I adore travel and sharing my stories with you, I am not traveling during this very real COVID-19 pandemic. I hope that you will travel vicariously along with me until the day that we can all safely satiate our wanderlust. Please keep yourself and others safe by making appropriate sacrifices for the greater good.

Before I went to the Languedoc-Roussillon region of France as a program assistant with the UGA en France program in 2014, I took a little shopping trip with Mama Laws back in East Tennessee to pick out some Frenchie chic tops and red Converse sneakers.

For the record, I am a Keds girl. I have been told that you are either a Converse or a Keds girl. The Converse sneakers gave me blisters so severe that I gave the shoes away. I actually took a photo of the gruesome crime scene on my toe as a grim reminder if I ever considered buying Converse sneakers again. I will not share that picture here, as you do not want to see it, I assure you. A friend of mine told me that Keds hurt her feet. She has no problem with Converse, and I know of many others who also love them and find them comfortable. You just gotta do you.

At Old Navy, we noticed a sale on pajama pants, and I instantly grabbed some bright magenta drawstring pants with aquamarine seahorses on them. I know! They were some of the cutest pajama pants I had ever seen. They made me want to burst into a chorus of “Under the Sea.” However, in spite of my elation, the curse began. You see ... these pants were cursed. They brought bad luck to all who wore them. Remember the “Brady Bunch” episode where they all go to Hawaii and Bobby finds the Tiki idol? The pants were just like that. Don’t believe me? Allow me to share.

Cursed Fate Episode #1: When I got the pants home, I noticed that my receipt seemed higher than anticipated. Yes, I normally check the receipt immediately, but I was so excited about seahorses and ceiling wax and cabbages and kings, I failed to check it whilst in the store. Instead, I gleefully skipped to the car, giggling about my cute French wardrobe and how I was leaving for France in a few days. I checked the receipt and the pants, which were supposedly on sale, in fact, were not. Saaaaaaad.

However, I liked the pants so much, I just had to keep them. It would be just fine!

Cursed Fate Episode #2: The first week or so in Montpellier, France, consisted of blissful sleep in a room at my host’s home that had these amazing blackout blinds, operated by a remote control — just spectacular. However, somewhere during what I believe to be the second week there, the curse continued. Cue creepy 70s music from “The Brady Bunch.”

I got up in the middle of the night to make a quick run to the powder room and on my way back from the W.C., I ran smack into the large bureau in Madame’s hallway. That thing came out of nowhere! It crashed loudly, and I felt a sharp pain in my leg. I just ignored it and went to sleep. What are you gonna do?

The next morning, I woke up and noticed an enormous bruise and a large gash on my right thigh. Wow. Oh, well. It took me two weeks to notice the sizable rip in my lovely new magenta seahorse pajama pants. It turns out that I had the pants on backwards that night. ... Well!

Cursed Fate Episode #3: When I got home from France, I spent the rest of the summer in Greeneville at my parents’ house before returning for my second year in Athens, Georgia. Mama Laws had asked me to go water her plant. Note: this was the first time that I had worn the pants in a good while, as I had a plethora of pajama pants with me at the Homestead. I had been comfortably watching television and simply walked outside in the pants and a t-shirt. Grabbing the watering can, I marched toward the plants in a chipper fashion. Ah, summertime in Tennessee!

Before I knew it, I had fallen down (quite hard) to the ground. I was in the strangest position with my left knee on the ground and my right foot completely twisted. I just kind of sat there for a minute soaking it all in, and then got up and watered the plant. How did that happen? Later, my foot was swollen and knee noticeably bruised. There was also now a grass stain in addition to the rip on the pants.

Cursed Fate Episode #4: As I was telling Papa Laws about the fall, he mentioned that the pants seemed to be unlucky. Not my pants! Not my adorable magenta pants with the aquamarine seahorses on them. Never my pants! As I attempted to contradict him, I hit my elbow full force on the rocking chair. A shock wave of pain radiated up my arm.

It seems that they really were cursed. Fortunately, those pants are long gone. Maybe they’re in someone’s crazy quilt. It’s hard to say. Reader, if you see a pair of pajama pants in bright magenta with aquamarine seahorses, the best thing that you can do is go to another clothing rack. Immediately! Do not fall victim to the Sisterhood of the Cursed Pants! Fortunately, I emerged relatively unscathed. You may not meet the same fate. Beware of seahorses bearing pants.

Author’s Note: I borrowed my title from the Ann Brashares series called “The Sisterhood of the Traveling Pants.” Spoiler alert: The traveling pants aren’t cursed.

Amy Laws has lived on three continents, in four states and has traveled to eight countries — and counting! A fluent French-speaker, her wanderlust keeps her traveling, but her roots have brought her back to Greeneville, Tenn.