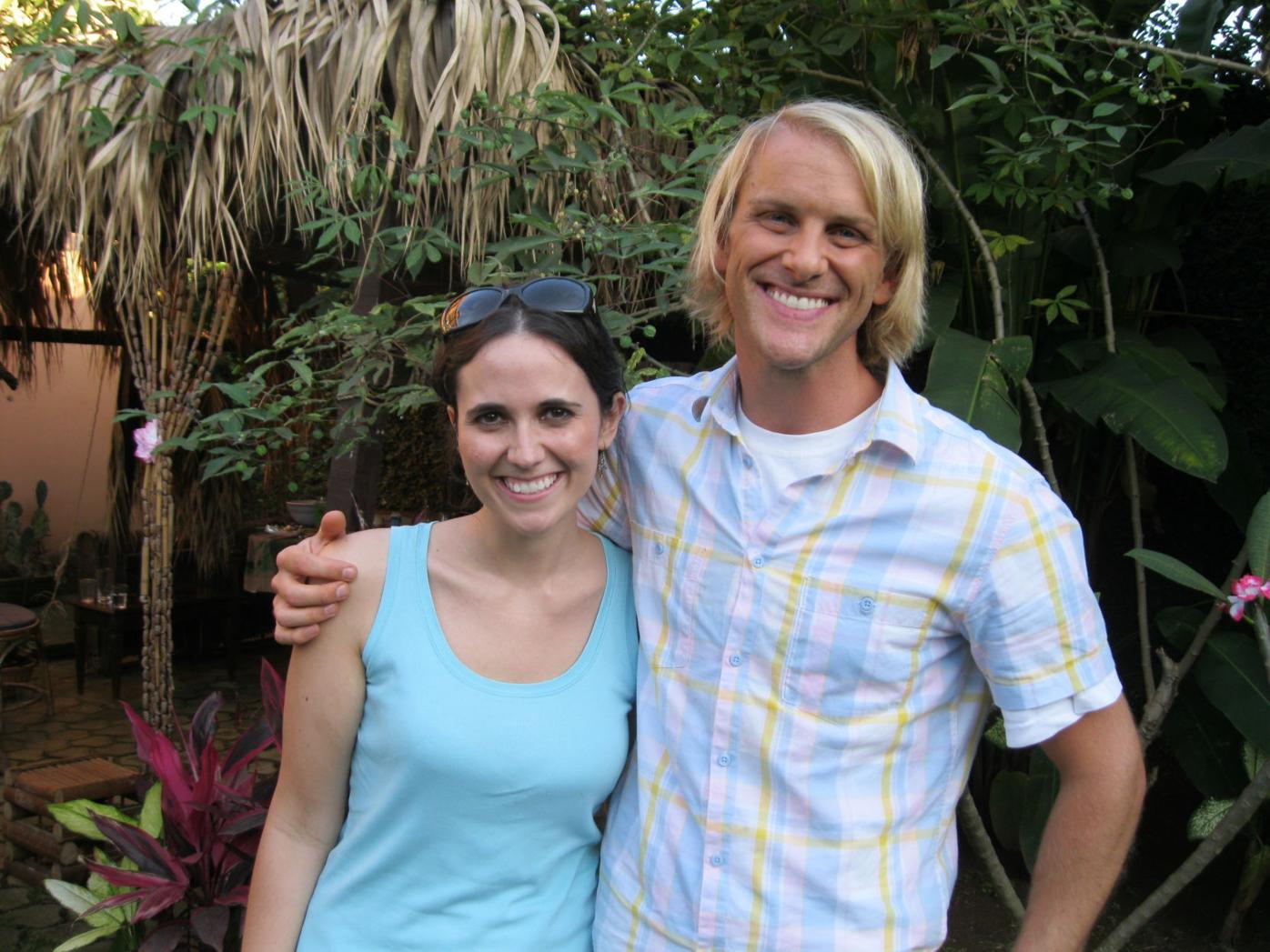 How did Amy, left, and Ryan end up singing duets from “High School Musical” in Camaroon? Read today’s Vivacious Voyager to find out. 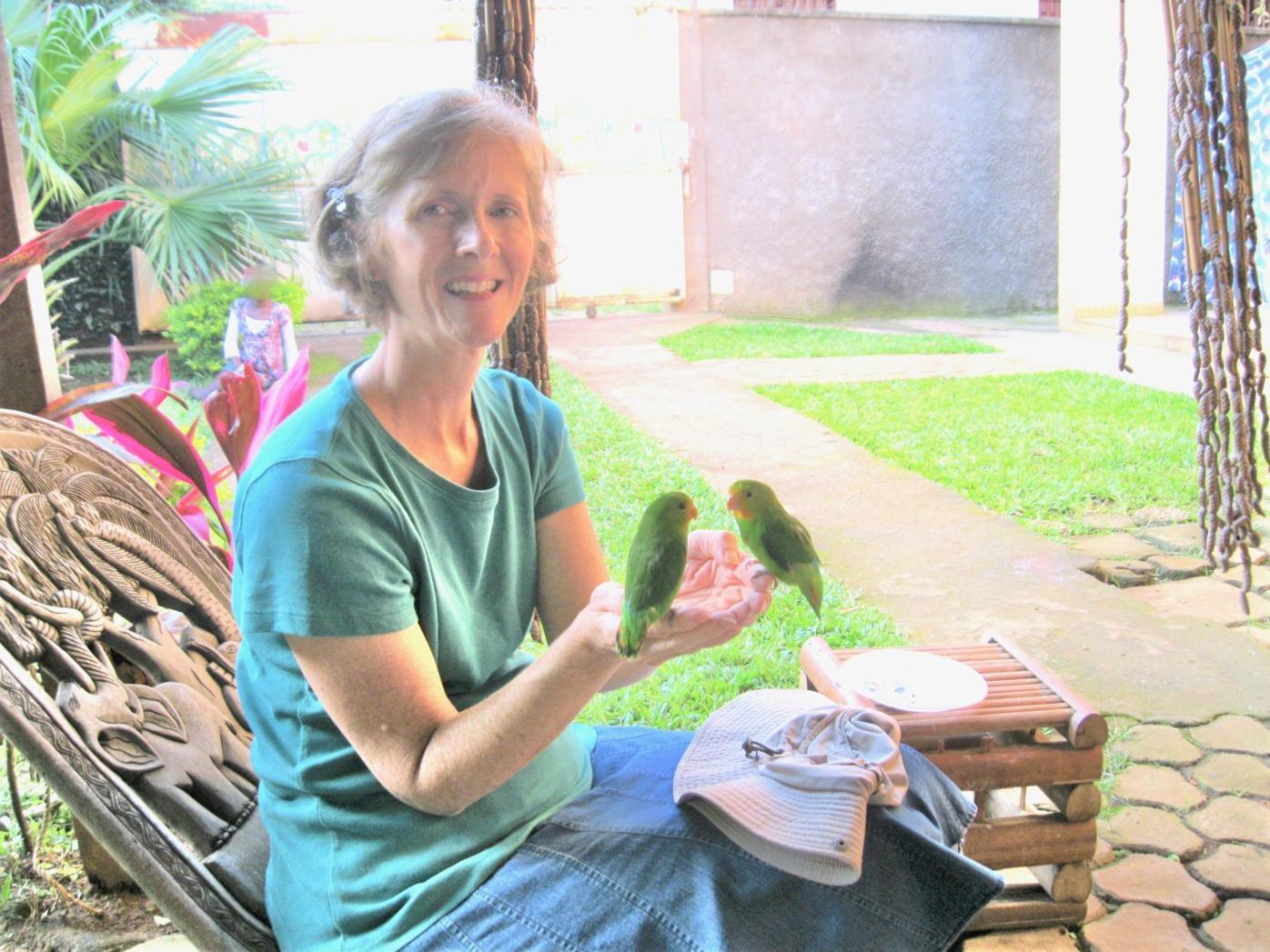 How did Amy, left, and Ryan end up singing duets from “High School Musical” in Camaroon? Read today’s Vivacious Voyager to find out.

A steady rain fell over Cameroon. I looked out my window to see lush greenery laced with brilliant reds. Tropical birds of all shades landed on the leaves. One particular bird looked like a beautiful emerald. I looked back on my SWISS Air flight to Yaoundé as I admired the view. In 2011, with my visitor visa stamped into my passport, I flew out of Tyson-McGhee in Knoxville to Chicago O’Hare.

From Chicago, I flew nine hours to Zürich, Switzerland where I bought Evian, read “Le Temps” and felt very French. Finally, from Switzerland, I flew nine more hours to Yaoundé, Cameroon. I particularly enjoyed the extra chocolates that the flight attendants gave me, and the tasty beef stroganoff and the caramel ice cream I was served for dessert.

While my seat was quite uncomfortable — like sitting on plywood for eighteen hours — the food was some of the best I’ve ever had on an airplane, along with South African Airways and my absolute favorite, Air France.

On the flight from Zürich to Yaoundé, I met a very nice Cameroonian woman and we conversed in French about various topics. When I arrived in the extremely chaotic airport, she stayed with me until I saw Kevin. She and her boyfriend, who met her at baggage claim, actually helped me find my luggage and the gentleman lifted my suitcase from the carousel for me. She even gave me her phone number in case I ever needed any help during my stay there. As I’ve told you before, Africans are some of the most kind and hospitable people in the world.

Driving in Africa is a terrifying, yet thrilling experience. There are no traffic rules apparently. Stop signs are merely ornamentation. Not even a pause. Seriously. Not even a pause. The roundabouts are absolutely mesmerizing. Mesmerizing in fear, that is. Cars are coming from absolutely every direction. Horns honk constantly. When driving down “normal” highways, two lanes merge into twelve. Four lanes turn into the Scrambler ... cars actually scrape one another. Motorcycles zip in and out without any fear. (Oh, wait they do that here on the Erwin Highway ...) Potholes, make that ravines, pop up seemingly out of nowhere. Usually, I am jostled around nineteen or twenty times and that’s just in the first thirty seconds of the ride.

Experiencing the aforementioned driving routine, it was quite the long journey to the orphanage. I had contacted Ryan, the orphanage director and set up an appointment beforehand. On the way there, I felt as if my heart were exploding about seven times, but managed to maintain my bright smile throughout most of the journey. At one point, we were stopped in this ridiculous conglomeration of cars. Cars were headed north, south, east, and west and there was nowhere to go. The front fenders of the east-bound cars were one pin’s length from touching the car doors of the north- bound cars. It was madness! So, what could be done? Oh, right, right, a civilian decided to get out of his car and start directing traffic.

At the entrance, an angelic kid greeted us and Ryan had arranged a lovely tour of the orphanage. The rooms were decorated in the theme of Disneyland’s Adventure Land. There was a Pirates of the Caribbean room, a Tiki Room, etc. Ryan had also built in a dance studio to teach the children various types of dance, a passion of his. We also met his delightful birds, Coco and Chanel.

Kevin, Jann, their son Caleb and I were introduced to all of the children, and had a meet and greet with an officer of World Bank and the wife of the Defense Attaché of the American Embassy, who had a delightful British accent. All of these people had absolutely fantastic personalities, but nothing could compare to my connection with Ryan. Reader, there are some people that you meet and you know you will never forget them. Ryan is one of those people.

We were literally BFF within about ten seconds of finding out that we both love “Saved by the Bell.”

We were also both in “My Fair Lady” in high school. Throughout the afternoon, we performed several duets, including “The Boy Is Mine” by Brandy and Monica from 1998. Ryan erupted with laughter when I sassily said “Oh, yeah. Definitely. I know his name.” In fact, I laughed so hard that afternoon that I will never forget it. It was one of the most enjoyable afternoons of my entire life. I am not exaggerating. I spoke with Jann about Ryan just the other day and she said “You guys clicked!” I vividly remember Jann and Kevin talking later that day about how it seemed like Ryan and I had been best friends for years.

Unfortunately, Ryan headed back for a visit to the States for the remainder of my time there, so we could no longer sing anymore duets from “High School Musical” or reminisce about 90s pop ballads. I have lost touch with Ryan, as often happens with the many people we meet in our travels, but I hope that we will meet again some day! I feel sure that we will pick right back up where we left off, perhaps singing another musical theatre number.

My biggest takeaway from that day at the orphanage was a reminder that even in the darkest times, there are people who love and care for others. They do their best to promote well-being, self-esteem and security. These people are like a Patronus who defeat life’s Dementors and stand for good and not evil.

Remember what Dumbledore says. “Happiness can be found in the darkest of times, if one only remembers to turn on the light.” Forsake petty behaviors and division. Light up someone’s life today with positivity.

Author’s Note: A special thank you to my readers who send me kind words and letters to the Sun. Thank you for taking the time to write to me.

Amy Laws has lived on three continents, in four states and has traveled to eight countries — and counting! A fluent French-speaker, her wanderlust keeps her traveling, but her roots have brought her back to Greeneville, Tenn.