The Bachman-Bernard Chevrolet-Buick-GMC-Cadillac dealership, 3365 E. Andrew Johnson Highway, is on track to be sold to LMP Automotive Holdings. 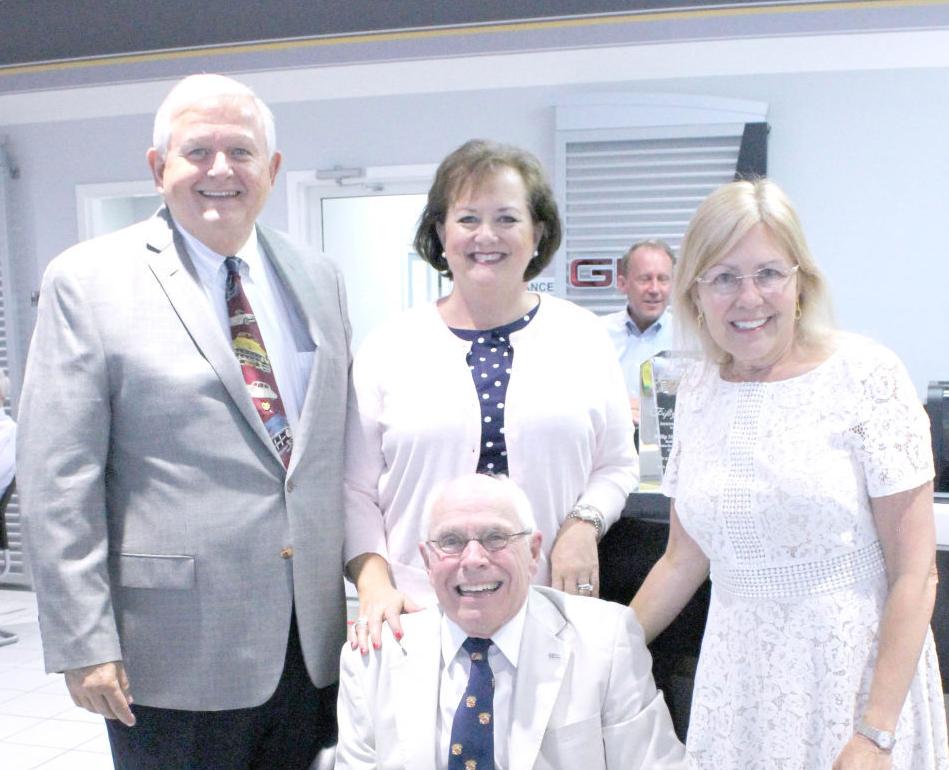 In this 2017 file photo, Phil Bachman, seated, celebrates 50 years as a Cadillac dealer. He is joined by, from left, partner Myron Bernard, Robin Bernard and wife Martha Bachman.

The Bachman-Bernard Chevrolet-Buick-GMC-Cadillac dealership, 3365 E. Andrew Johnson Highway, is on track to be sold to LMP Automotive Holdings.

In this 2017 file photo, Phil Bachman, seated, celebrates 50 years as a Cadillac dealer. He is joined by, from left, partner Myron Bernard, Robin Bernard and wife Martha Bachman.

Longtime Greeneville car dealers Myron Bernard and Phil Bachman have reached an agreement to sell the Bachman-Bernard Chevrolet-Buick-GMC-Cadillac dealership to Plantation, Florida-based LMP Automotive Holdings, according to a filing with the U.S. Securities and Exchange Commission.

The agreement filed Aug. 28 lists the purchase price for the business at $7.9 million, with an undetermined amount to be paid for its automotive inventory, parts inventory and other items. A closing date had not been set at that time.

The Bachman-Bernard agreement coincided with LMP Automotive Holdings announcing it had reached agreements to acquire nine dealerships across the southeast region.

“We are excited to expand our fulfillment footprint in this Eastern United States region which is in line with our hybrid e-commerce and dealership clustering strategy,” LMP Chairman and Chief Executive Officer Sam Tawfik said in a statement accompanying the SEC filings. “We are looking forward to enabling our subscription and e-commerce technology over these dealer platforms in order to further expand our online fulfillment presence and add to their historical success.”

LMP, which began trading publicly in December 2019, sells cars at its dealerships, but also offers a subscription-based model as an alternative to buying or leasing a vehicle. Available on pre-owned vehicles, this model is meant to offer flexibility, according to the company.

Subscribers can pay on a monthly, weekly or to-own basis and have the option to upgrade for a different vehicle or downgrade to lower their payment, the company says on its website, www.lmpmotors.com.

Tawfik also stated that LMP plans to continue expanding and hopes to acquire 30 to 40 more dealerships in 2021.

Negotiations are still underway on some aspects of the sale, but in the filings LMP said it will pay $5.4 million for the property and $2.5 million for company and personal goodwill, an intangible asset that typically includes things such as the value of a company’s brand and its owners’ reputations, customer base and employee relations.

LMP must still be approved by the manufacturers represented by Bachman-Bernard and other dealerships it plans to buy. A closing date will be determined after that happens, according to the SEC filings.

At that time Bernard, then 63, said his and then-78-year-old Bachman’s ages were factors in the decision to sell that dealership.

Prior to that sale, Bachman sold Honda of Morristown and Phil Bachman Honda in Kingsport to Hudson Automotive Group in the fall of 2013 and later also sold Phil Bachman Toyota in Johnson City.

Bachman began his automotive career in Greeneville in 1967, when he acquired the local Pontiac-Cadillac dealership. Bachman and Bernard have been in partnership since 1983.