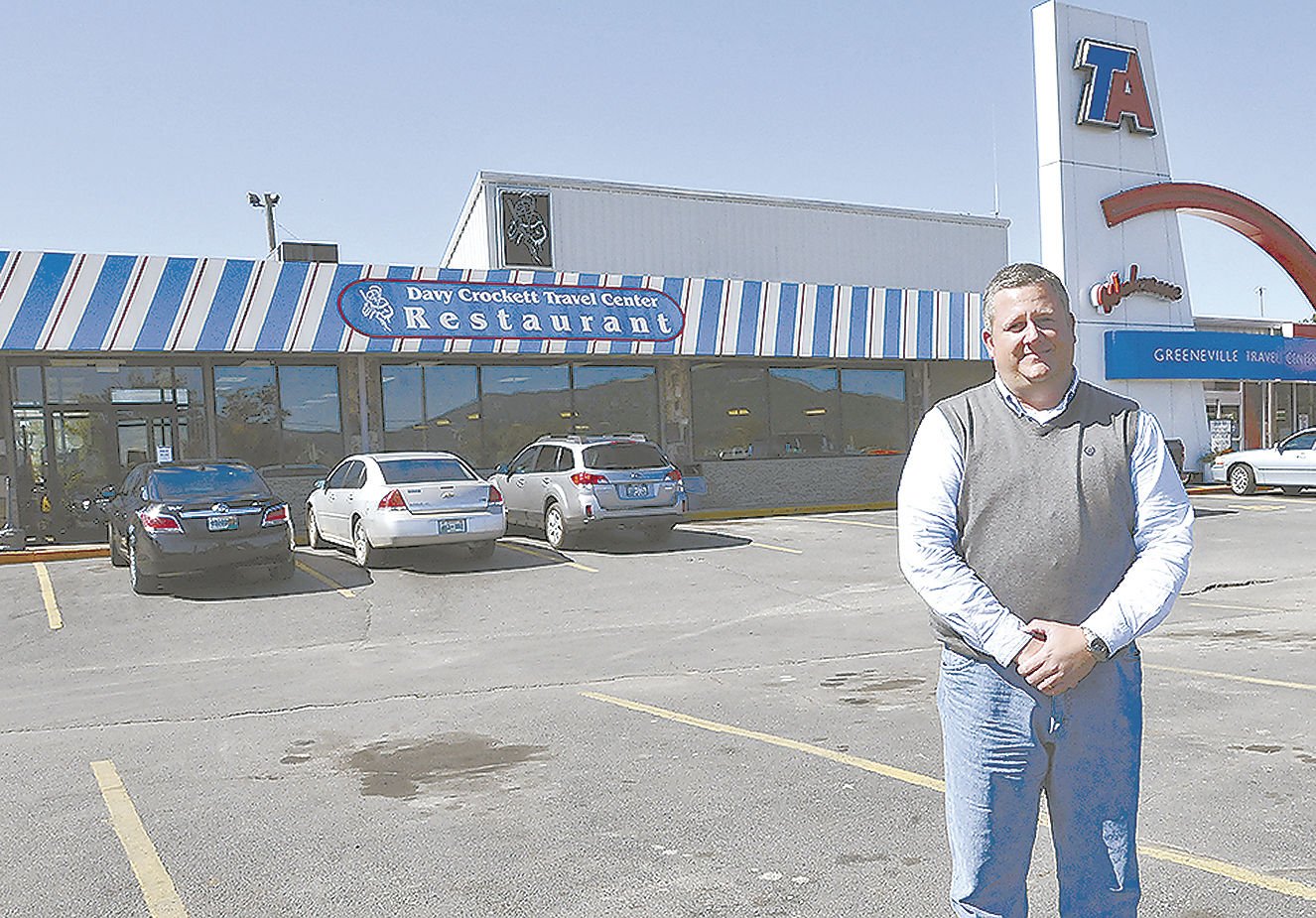 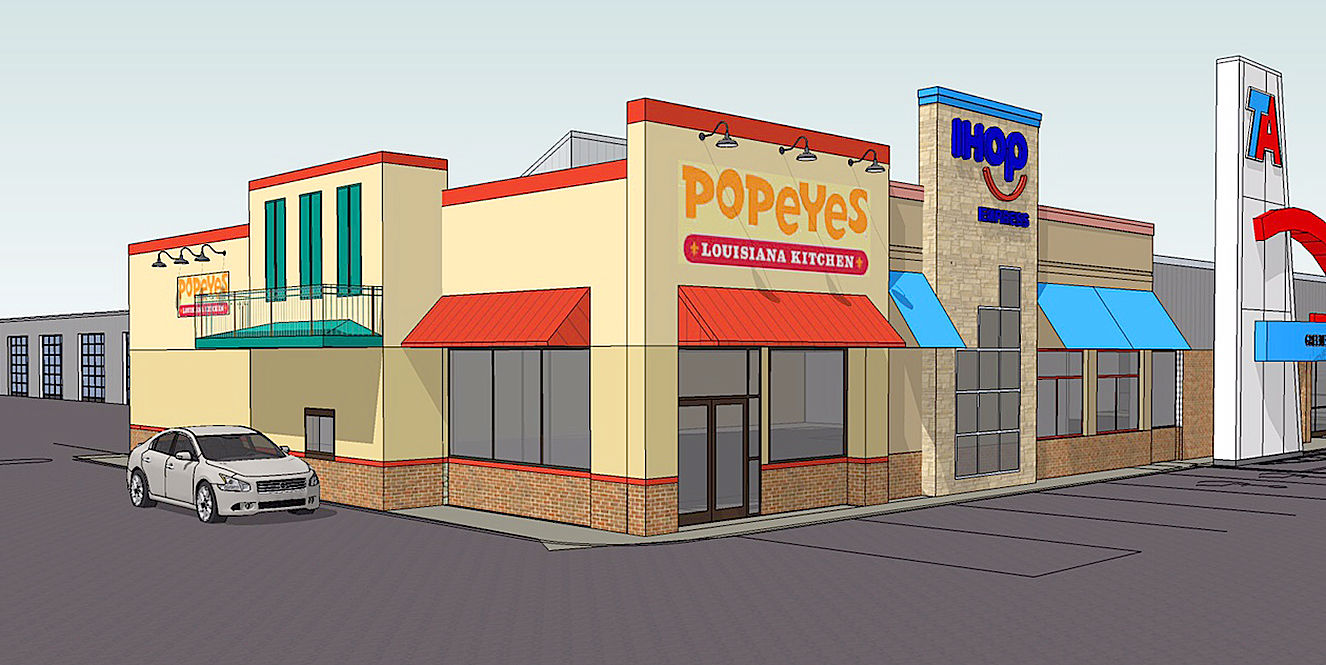 It may be the most anticipated truck stop renovation Greene County will ever see.

The TA Travel Center in Baileyton, which currently features a store, trucker amenities and Davy Crockett Restaurant, is in its 40th year of operations.

To mark the occasion, co-owners Jason Brandon and brother Richard Brandon are making some significant renovations. It was just five years ago that the brothers spruced up the restaurant, but now it's about to make a split into two food establishments.

The Brandons sought out some nationally recognized chains to draw traffic from the interstate and, in doing so, landed franchise contracts with Popeyes Louisiana Kitchen -- a chain known to partner with TA -- and the International House of Pancakes.

This marks the first occasion an IHOP Express has merged locations with a TA facility, but the chain expressed enthusiasm for coming to the I-81 location.

"I'm happy to confirm that an IHOP restaurant is scheduled to open in Greene County in early December 2016," said Alex Levin, IHOP spokesperson. "For 58 years IHOP has proudly been serving guests freshly made breakfast foods at any time of day, every day. I can confirm that this location will seat approximately 80 guests, be open 24/7, 365 days a year and bring anywhere from 35 to 50 jobs to the community."

He noted that the restaurant will include a contemporary design with wood-like porcelain floors and "our iconic banquette seating."

Jason Brandon noted that the restaurant will be an express version -- meaning it won't bring the full menu. However, Levin said the offerings should still be extensive.

"In addition to our world famous buttermilk pancakes, the restaurant will offer French toast, hickory smoked bacon, omelettes, International House roast coffee served in IHOP's famous, never-ending coffee pot and many other breakfast favorites," Levin said. "Guests can also enjoy a variety of signature lunch and dinner items like our hand-seasoned burgers, including breakfast-inspired choices like our Denver omelette burger, all made with 100 percent USDA Choice beef and served on a Brioche bun.

"IHOP and our franchisee looks forward to welcoming guests in and providing them with unparalleled breakfast experience," he concluded.

Brandon said that the Popeyes will likely open in January. It will feature a drive-thru window and be open from 10 a.m. to 10 p.m.

The restaurants will seat a combined 125 guests. Construction will begin the first week of October, he added.

"Our foodservice manager, Sandra Wisecarver, has been with us for several years and in the restaurant business for over 25 years," Brandon said. "She does a superb job for us and will be overseeing both restaurants with managers under her. We hope to keep each and every current employee as we have many that have been with us several years."

He explained that the travel center currently employs 72 and will be adding 25-30 new restaurant employees. Another 10-12 truck service employees means at least 35 new jobs, he said.

New truck service employees are needed because the restaurants aren't the only change coming to the travel center. The renovations are actually going to come in four phases, one of which is nearly complete.

"Over the past 10 years, we will have basically rebuilt the entire facility from the roof to the floors by the end of this renovation period," Brandon said. "The three building phases will be adding over 20,000 square feet to our current 12,000 square feet."

Phase I -- which includes $1.4 million in construction, according to Greene County building permits -- includes the addition of six new bays to truck service center, giving a total of eight bays. Construction began this spring and the center will open Oct. 3, he said.

Phase II is also underway and involves doubling the size of the store and adding four more showers to the current six, a new, larger TV room with theatre-style seating and a new laundry facility.

Phase III is adding the restaurants.

Phase IV, he said, is improving and expanding the parking lot. Improvements will begin this fall, with expansion following into early spring.

"I want to see our exit developed to bring more services to the community and more tax dollars for the Town of Baileyton," Brandon said. "I have tried to draw in many food brands as well as hotel brands over the years. I have always been told that a hotel wants to see major food brands on the same exit, and restaurant developers want to see a hotel.

"I hope these new food brands will help to pique the interest of hotel developers. If not, we may build one ourselves at some point in future years," he said.

About The TA Center

For four decades, the TA Travel Center in Baileyton has been a highly recognizable stop along Greene County's Interstate 81 corridor. Co-owner Jason Brandon shared the following statement regarding the company's history and coming changes.