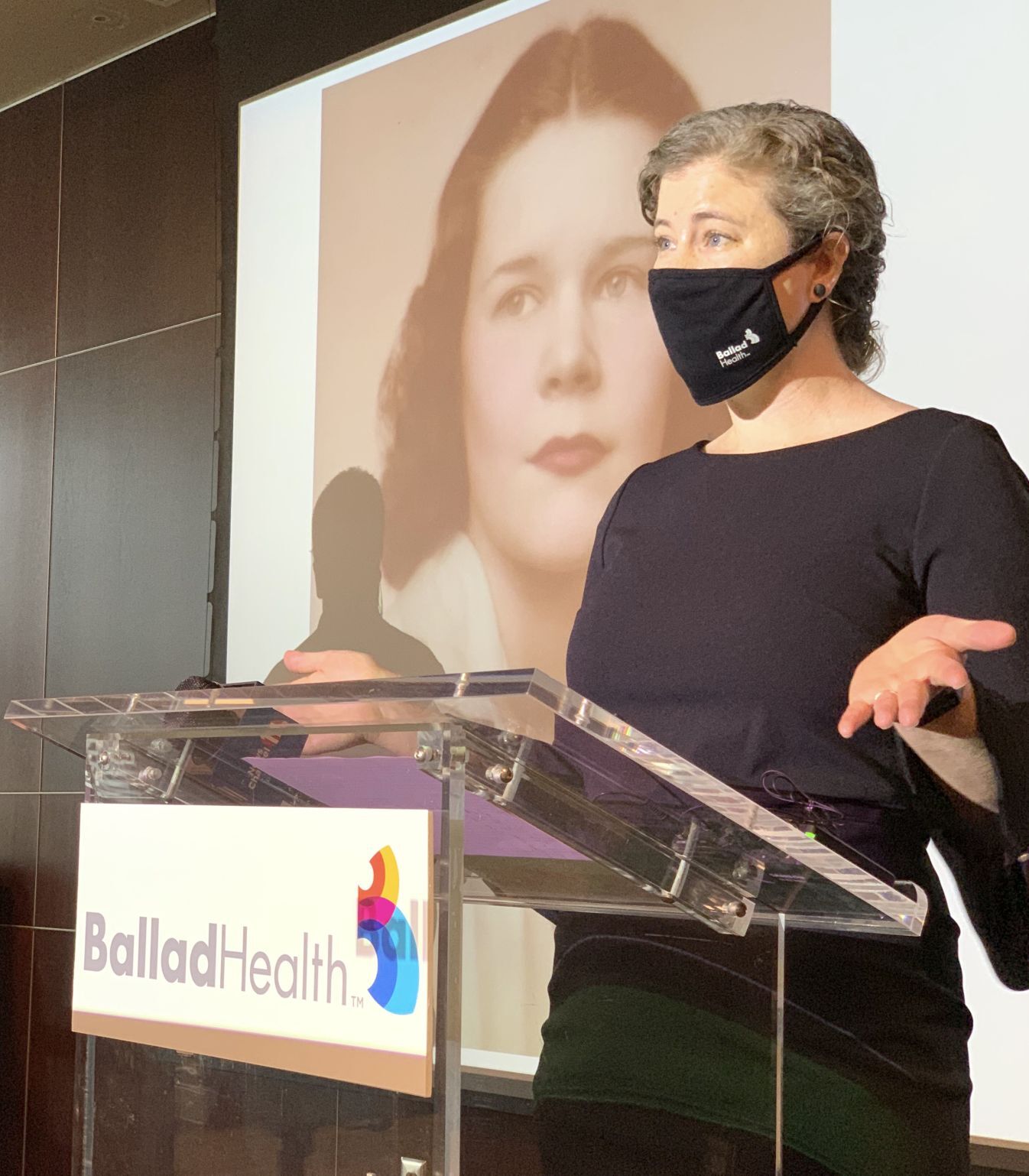 Claire Marr tells about her grandmother, a veteran, who died earlier this year from COVID-19 during Wednesday’s coronavirus briefing by Ballad Health. 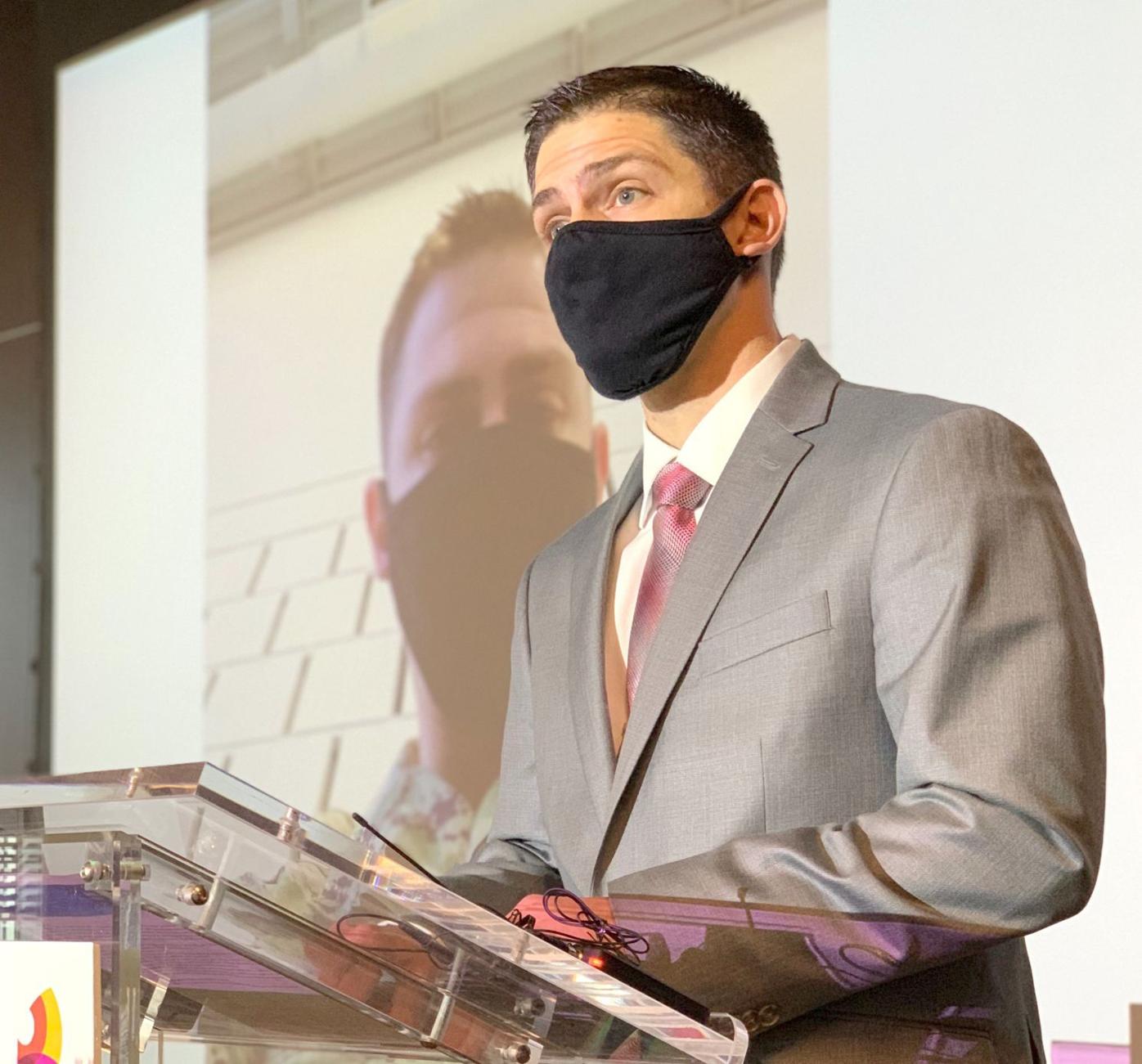 Claire Marr tells about her grandmother, a veteran, who died earlier this year from COVID-19 during Wednesday’s coronavirus briefing by Ballad Health.

Betts credits his and his fellow health care providers’ ability to not contract the virus to vigilance in wearing a mask, social distancing, frequent hand washing and strict adherence to restrictions in place to limit contact during his service at a temporary COVID-19 care facility set up inside the Javits Center in New York.

“When we go to the front lines we wear body armor, not because we want to — it is hot and uncomfortable,” he said. “We wear it because we respect what a bullet could do to our body if we are not wearing it. I think of my mask the same way, as armor against an invisible enemy.”

Betts, who is associate administrator at Bristol Regional Medical Center, and Claire Marr, the health system’s clinical value improvement coordinator, were guest speakers at Ballad Health’s weekly COVID-19 briefing on Wednesday, sharing their connections to the military and the coronavirus.

For Marr, a special veteran in her life was her grandmother, who served in the women’s air corps in World War II. At each stage of her life, her grandmother has been her cheerleader and a great source of encouragement and support, she said.

Earlier this year, despite the best efforts in her long-term care facility to keep it virus free, Marr said her grandmother contracted the virus from a staff member, developed pneumonia and died shortly afterwards.

In memory of her grandmother, Marr asked people to not dismiss the virus or the risk.

“We are at a crucial point,” she said. “What happens next is in your hands.”

Greene County had 41 new cases of the virus reported Wednesday, according to the daily COVID-19 update from the Tennessee Department of Health. Active cases in Greene County dropped by 20 and now stand at 316. No new deaths or hospitalizations were reported locally.

Nationwide, more than 10 million people have contracted the virus and 239,950 have died, according to the Centers for Disease Control and Prevention.

On Wednesday, Ballad Health had 217 people hospitalized for treatment of COVID-19 in its facilities, which is the highest virus in-patient count since the pandemic began.

It was the second day for that number of hospitalized. “But, it is not the same 217. We had over 30 discharges yesterday,” said Jamie Swift, chief infection prevention officer for Ballad Health. “We discharge people and it fills right back up with more virus patients.”

As Ballad Health shares information about the virus, Swift said that some have described the health system as being alarmist. However, she said, sharing the numbers and data is an effort to educate the public.

Swift said that a 5% positive rate would indicate a significant slowing of the spread of the virus and a goal would be to have it at less than 1%.

In the 10-county Northeast Tennessee region, there were 286 new cases of the virus reported by the state Department of Health on Wednesday. The most was in Washington County with 82 additional people testing positive for the virus. Sullivan and Greene counties had the second highest totals with 41 apiece.

In the past week, the health system has seen about 30 patients in the emergency room for COVID-19 under the age of 18, and at least one of them contracted the virus through trick or treating, Swift said. More cases associated with Halloween activities are expected in the coming weeks, she said, adding that the system is also beginning to see more cases from nursing homes.

For the upcoming Thanksgiving holiday, Swift encouraged people to think about alternatives to a large family gathering to help lessen the spread of the virus.

During the briefing, Swift was asked about the inactive/recovered category included in the daily data from the Department of Health. Swift said she understood the state’s methodology for the category in that it records when people are no longer infectious from the disease. However, she would prefer that it be labeled differently.

While the category records the number of people who are 14 days beyond the onset of symptoms and not hospitalized or two weeks past a positive test if asymptomatic, it does not mean that the person is fully recovered from the illness, just that they are no longer infectious, she said. Greene County has 1,953 people who are listed as inactive cases.

In his comments, Betts described the temporary medical facility set up for care of patients in the Javits Center and how the virus affected the city.

“It was a scary sight to walk into New York City and not see anyone on the streets,” he said. “It was not what you expected for a city as large as New York.”

Asked about the reception in New York, Betts said the patients were appreciative of the care, but there were some who gave them pushback because they were military. There were numerous soup kitchens and restaurants that provided meals to the medical personnel.

Temporary facilities in tents, such as seen in hotspots in New York are not out of the question in this region, Swift said. An option of setting up tents outside of facilities to allow spacing between individuals waiting for treatment in emergency rooms has been discussed as the height of flu season approaches, she said.