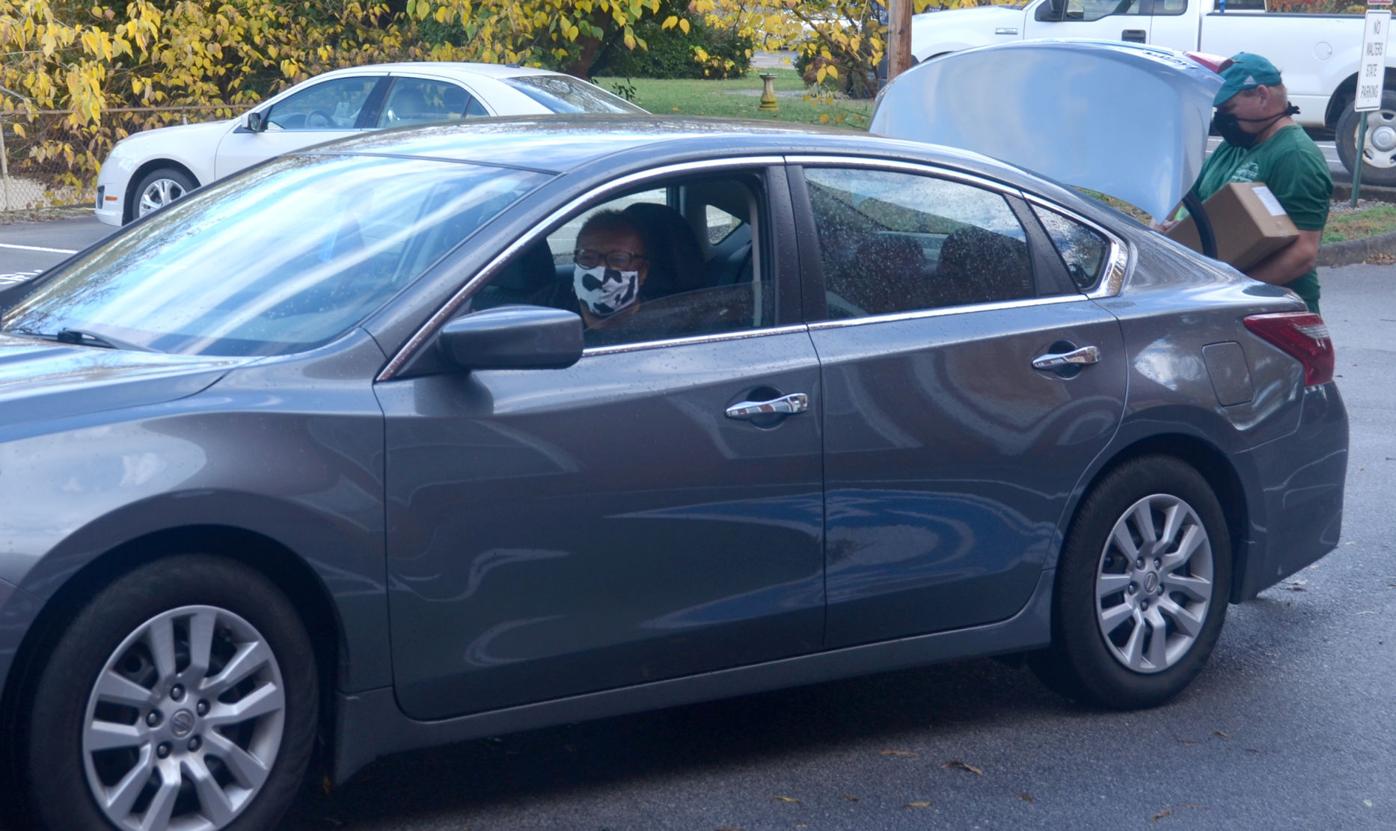 Les Weems of the Greeneville Parks and Recreation Department loads a food box into the trunk of Pricscilla Ray’s car Wednesday morning during a distribution at the Roby Fitzgerald Adult Center. The food boxes were provided for Roby members through a grant from the First Tennessee Area Agency on Aging and Disability. 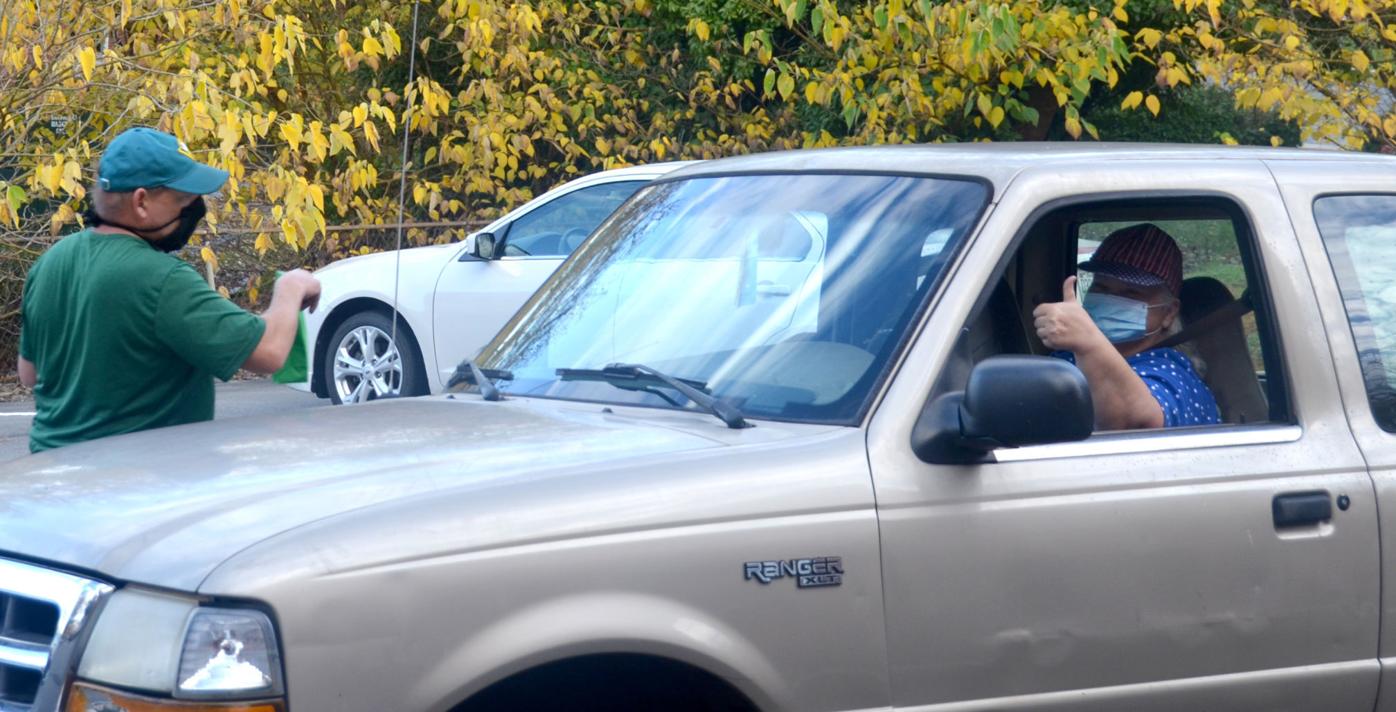 Brenda Page gives a thumbs up as Greeneville Parks and Recreation Department staff member Les Weems delivers a box of food to her truck. The free boxes of non-perishable items were provided to members of the Roby Fitzgerald Adult Center on Wednesday.

Les Weems of the Greeneville Parks and Recreation Department loads a food box into the trunk of Pricscilla Ray’s car Wednesday morning during a distribution at the Roby Fitzgerald Adult Center. The food boxes were provided for Roby members through a grant from the First Tennessee Area Agency on Aging and Disability.

Brenda Page gives a thumbs up as Greeneville Parks and Recreation Department staff member Les Weems delivers a box of food to her truck. The free boxes of non-perishable items were provided to members of the Roby Fitzgerald Adult Center on Wednesday.

The Roby Fitzgerald Adult Center was a busy place with daily programs and activities each weekday before the coronavirus.

The center is still an active place, but in a completely different way since it closed to in-person activities for its members in mid-March.

Food distribution has become the primary activity at the Roby Center, and Wednesday provided an opportunity for the staff to see some people they may have not seen in a while as they distributed free food boxes to those who regularly attended activities within the facility.

More than 60 members came through the center’s parking lot to receive free boxes packed with non-perishable food items. The food boxes were provided by the First Tennessee Area Agency on Aging and Disability through a grant from the National Meals on Wheels Association. Members also received gift bags from Caris Healthcare.

The grant provided 168 of the food boxes to the Roby and the remainder will be distributed during the rest of the year. The boxes contained such items as canned vegetables, chunk chicken, spaghetti sauce, rice and juice. Staff from the Greeneville Parks and Recreation Department were also on hand to help with loading the boxes into people’s vehicles.

From the smiles that grew on faces as members drove around the corner of the building and saw staff members at the table set up for the food distribution in the parking lot, it was evident that the Roby Center holds a special place in their hearts.

“I miss coming to the Roby,” said Brenda Page as she received her food box. “I really appreciate the food.”

As members came through, they asked about friends by name — if they had been through or might need some help in getting a box.

Roby Center Director Glenda Blazer said it was good to see many of the members, some of whom the staff had not seen in a while.

“There are some that we see along as they come by to pick up meals,” she said.

Center members who participated in the congregate meals at the Roby prior to the pandemic, which are provided through the Area Agency on Aging, are eligible to pick up frozen meals.

After the pandemic began, the frozen meals were provided to those who participated in the meal program at the Roby in its place, and are available for pick-up once a week.

Once the Roby Center does reopen, changes will be in place due to the coronavirus, Blazer said.

“Things are not going to be the same,” she said. “We are following the rules set by the Tennessee Commission Aging.”

Social distancing restrictions will be in place, which will result in a temporary suspension of the congregate meals while those restrictions are in effect.

One of the most frequently asked questions was if the staff had an estimate of when members could expect to return to the Roby in person, for which there is no definitive answer.

When Blazer sent out letters to members about the food box distribution, she was hoping to have a date for the reopening of the Roby Center. But local cases of the coronavirus cases started increasing, resulting in uncertainty about the timing of center’s reopening.

As an agency of the Town of Greeneville, the Roby Center is included in its citywide COVID-19 reopening plan. That plan is based on the level of the virus within the community and considers such data as the percentage of active cases in Greene County, consecutive days of zero new positive COVID-19 cases and bed capacity in the Ballad hospital system to care for virus patients.

While some Greeneville facilities opened in late spring, the town re-entered Phase I of its reopening plan in mid-July as virus case numbers increased, closing such facilities as Town Hall. That phase calls for the Roby Center to remain closed. Other phases would allow the center to reopen with social distancing requirements in place.

In addition to the congregate meals, the Roby Center is a site for the distribution of daily meals to the homebound through another program operated by the Area Agency on Aging and that has continued throughout the pandemic.

More than 60 meals are delivered daily during the week to homebound people with meals also provided on Fridays for the weekend.

Both meal programs are available through Area Agency on Aging to those age 60 and above. Seniors who need assistance with meals are encouraged to call the Area Agency’s information and assistance line at 423-928-3258.

Volunteers are also needed to help with the distribution in Greeneville to the homebound, according to the Area Agency on Aging. Volunteers would need to be able to contribute an hour or two for a route to distribute meals on days they can serve. Those interested in volunteering are asked to contact Leslie Wright at the First Tennessee Human Resource Agency at 423-461-8200.