Jeff Morgan, right, detective captain with the Greene County Sheriff’s Department, speaks with Sheriff Wesley Holt and Chief Deputy David Beverly at a retirement reception in his honor held Friday at the Greene County Courthouse. Morgan served the sheriff’s department for 34 years, most recently as supervisor of detectives.

Jeff Morgan, right, who retired as Greene County Sheriff’s Department detective captain after 34 years of service to the department, speaks with well-wishers at a retirement reception held for him Friday at the Greene County Courthouse.

On Friday, Morgan was congratulated on his retirement at a reception held in a spot very familiar to him, Criminal Court at the Greene County Courthouse.

Morgan, 54, has worked on many tough cases over the years as he rose through sheriff’s department ranks from corrections officer, dispatcher, patrol, deputy, detective and then detective captain.

“It’s been a long road. It’s been rewarding and it’s been an honor to serve 34 years,” he said.

“He is well respected in the local, state and federal law enforcement circles. When a person such as Jeff retires, it is at a great loss for the department since he is a walking encyclopedia of law enforcement knowledge,” Holt said. “Jeff has worked all areas here at the department from corrections to patrol to detective and administration. He has been an asset to the department and we wish him well in his retirement.”

Evidence Technician Angie Weems worked with Morgan for 31 years, including more than 20 years in the Criminal Investigations Division supervised for many of them by Morgan.

“I’ve probably worked more (cases) with Jeff Morgan than anyone else,” Weems said.

As a patrol deputy, Morgan was among the first law enforcement officers on scene at the 1997 Lillelid family murders, a case still vivid in the minds of the public.

Weems said that as a detective, Morgan worked as lead investigator in a variety of cases, including several he received recognition for from the U.S. Attorney’s Office.

Morgan was the lead investigator in the 2004 investigation following a bank robbery at the Greene County Bank branch in Mosheim.

“He worked really hard on that case.” Weems said.

Another 2004 case involved the armed kidnapping of an eastern Greene County woman. Both investigations led to the arrest and prosecution of the defendants responsible for the crimes.

For his work in those cases, Morgan was recognized in 2005 by federal officials as the Project Safe Neighborhoods and Violent Crime Task Force “Officer of the Year” for the federal Eastern District of Tennessee.

“Detective Morgan continuously exemplified professionalism and dedication to the ultimate mission of Project Safe Neighborhoods, to reduce gun violence and to protect citizens from violent crime,” a news release by the U.S. Attorney’s Office said.

Weems recalled she and Morgan also worked on the first Amber Alert case in Greene County in 2010, involving three defendants who kidnapped a baby and then fled to Miami, where they were located and charged.

More recently, Morgan investigated the August 2016 murder of 21-year-old Jessie N. Morrison, whose body was found on a rural road in Afton. An ensuing trial resulted in a murder conviction for Vonda Smith, the grandmother of Morrison’s oldest child.

Weems said Morgan was a law enforcement professional who was also concerned about the well-being of his fellow deputies.

Detective Lt. C. Michelle Holt worked with Morgan for 26 years. She said Morgan was always ready to assist other deputies.

“He’s been a go-to (person) as long as I’ve been here. If you’ve got a question, he has an answer or he will find it,” Holt said.

Holt humorously recalled one night early in her career, when she was working at the Greene County Detention Center, Morgan brought a driving under the influence suspect into the jail sallyport.

“He must have hit a skunk on the way. It stunk. The whole jail smelled like a skunk,” she said.

Former Sheriff Pat Hankins attended the reception and also had praise for Morgan.

“All the time I was here Jeff was one I could truly trust. Jeff was extremely smart,” said Hankins, who also worked on cases with Morgan when he was a detective with the Greeneville Police Department prior to becoming sheriff.

“We always worked well together. He was always willing to help,” Hankins said.

“It’s a big loss to lose him. I’m glad he made it to retirement,” said Davis, who began his career as a Greene County sheriff’s deputy and worked alongside Morgan.

“When I got promoted to detective captain, we worked well together. He’s a good man. I wish him the best in his retirement,” Davis said.

Morgan has no set plans for retirement.

“I’ve got some work around the house to do and play a little golf,” he said. “I’ll find something to do eventually.” 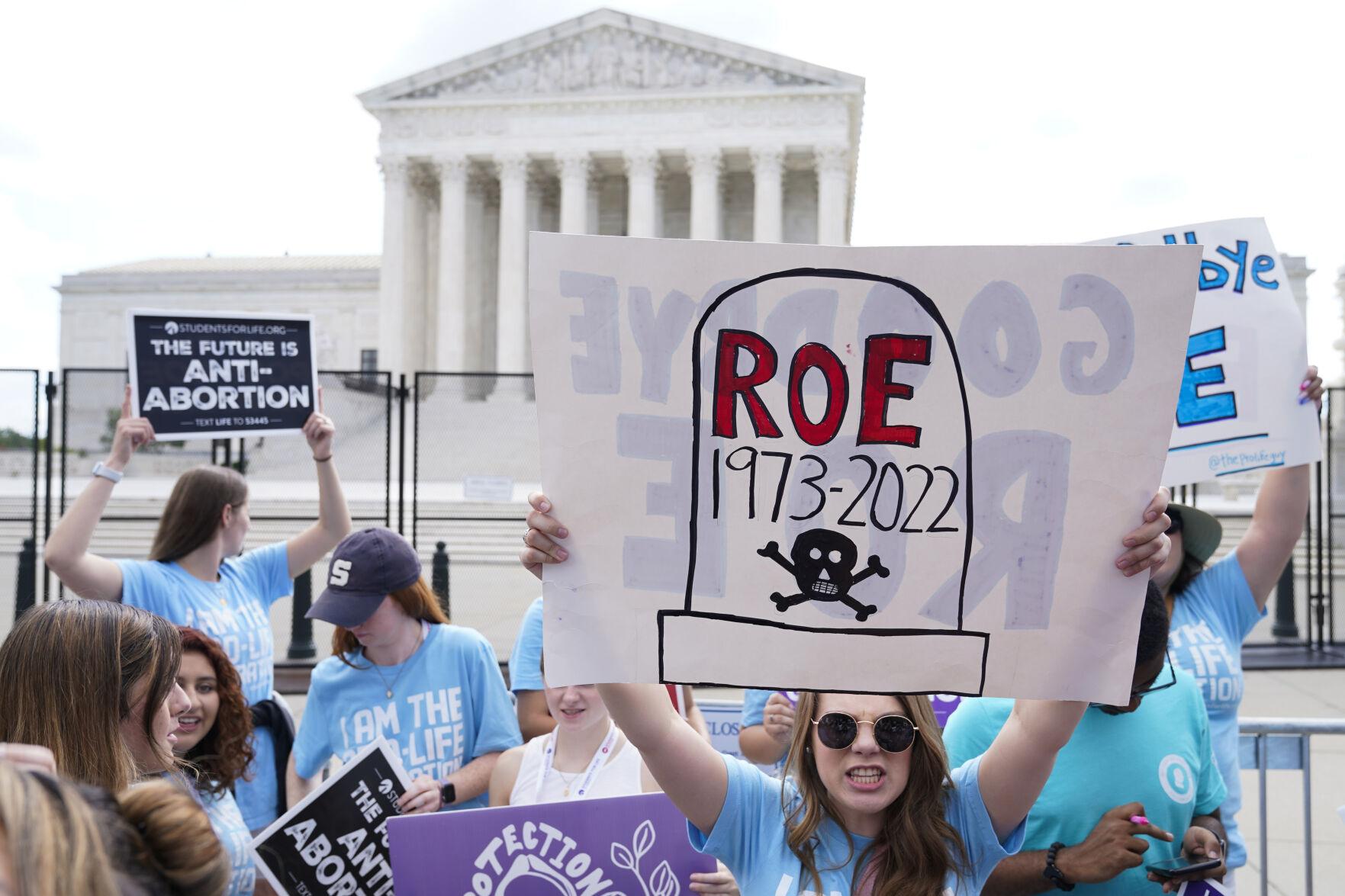 Anti-abortion demonstrators are seen outside the Supreme Court in Washington on Friday. The Supreme Court has overturned the landmark Roe v. Wade ruling and ended constitutional protections for abortion that had been in place nearly 50 years.

The Greeneville City School Board approved a purchase of 16 piano keyboard stations to create a piano lab at Greeneville High School during its meeting on Thursday.

Greeneville High School has active band and choir programs as well as an AP music theory course, and Beverly Miller, assistant director for administration and chief technology officer for the district, said there is great interest in the addition of a keyboarding class.

She said music instructors and leaders at the school proposed the idea of a piano lab.

“I attended a meeting about this about a year ago with our music teachers, who had this fabulous idea that they had really fleshed out and were really excited about,” Miller said. “This is an expensive technology project, but I thought they had a really great idea, so I referred them to Dr. Bryant to look at the curriculum.”

Miller said interest at the school is so great that some additional keyboards were added to the initial request.

“We were originally looking at a smaller size lab, but Beth Ricker, who has been running our master schedule, said student requests were just so extensive and so many students are interested, so we added a few more units to the package,” Miller said. “We are proposing 16 physical keyboards and a teacher station, which will allow the teacher to send and receive information from student devices.”

“There is very high interest, so we are proposing three sessions — two in the fall and a third in the spring,” he said.

Miller said the equipment is likely not to arrive in time to be fully installed by the start of the fall semester, but teachers are prepared to proceed with other work with the plan that the equipment will be in place soon after the semester begins. She said space exists and was cleared at GHS to create the lab.

“I don’t see this being in place at the start of the year, but they said they have other things they can work on until it gets here. They already have the space set up and ready because they are excited,” she said.

The project comes at a cost of $24,416, which will be funded through textbook/IT funds.

The board also approved a final budget amendment to the 2021-22 budget, which adds $811,923 from multiple grants and routine reimbursements, Chief Financial Officer Ellen Lipe told the board. The adjustment includes a 17% increase in local sales tax revenue over the previous year, she said.

The board also approved multiple insurance policies, some of which are more costly than in previous years mostly due to work-related accidents, Miller said. She said cybersecurity coverage is also more costly because schools are high risk clients for insurance companies.

“We are seeing a 334% increase from last year to our cyber security coverage from the one company willing to give us a quote,” Miller said. She said other companies she requested quotes from told her they were no longer insuring schools.

A new policy related to the aviation program at the Greene Technology Center, for which the city schools serves as fiscal agent, was also added.

The board also approved the purchase of a fluke networks cable analyzer for use by the district electrician at a cost of $13,486 and an agreement for professional development related to upcoming math textbook changes, and updated multiple policies.

The cost of $69,250 for professional development is covered through a two-year Math Implementation Grant from the state.

Policies updated as part of ongoing review include those related to board agendas, the district’s grading system and employee recruitment.

Starnes said the change to the policy on the grading system is related to state-level changes.

“Legislation passed in the most recent legislative session changes the grading system for grades 9-12 to a 10-point scale, which kind of reflects the college grading scale,” Starnes said. “We want all of our students not to be at an unfair advantage when applying for scholarships out of state, and we kind of wanted to level the playing field, so since we have the option to update the grading scale at all grade levels, we are recommending to do that for grades 3-12.”

Starnes said the new system will take effect in the fall.

The next meeting of the Greeneville City School Board will be July 26.

The state also has a trigger law that was written to ban nearly all abortions if Roe v. Wade was overturned. That ban cannot take effect until 30 days after Friday’s U.S. Supreme Court ruling. But the six-week ban could be implemented as early as next week, if the 6th U.S. Circuit Court of Appeals agrees to lift a court injunction.

Tennessee has a “valid interest in protecting the lives of unborn Tennesseans,” the motion states. “Those lives are at risk each day the preliminary injunction remains in place, so this Court should grant the State’s motion as soon as possible.”

Coffield said the facilities will still provide other health services and will help guide women to accessible abortion services elsewhere.

“Let me very clear: Banning abortion will cause a public health crisis,” she said. “And we will not forget that the Tennessee and Mississippi lawmakers who have systematically rolled back our rights and bartered our bodies for votes are the ones who got us here.”

Meanwhile, Tennessee Right to Life celebrated the many years of organizing and lobbying it took to get to this point.

“We stand on the shoulders of those who in 1973 refused to accept that Roe v. Wade and legalized abortion were the law of the land,” Tennessee Right to Life President Stacy Dunn said at a Friday news conference at the state Capitol. “This is a great victory for democracy.”

Click and hold your mouse button on the page to select the area you wish to save or print. You can click and drag the clipping box to move it or click and drag in the bottom right corner to resize it. When you're happy with your selection, click the checkmark icon next to the clipping area to continue.

Check your email for details.

Submitting this form below will send a message to your email with a link to change your password.

An email message containing instructions on how to reset your password has been sent to the e-mail address listed on your account.

Your purchase was successful, and you are now logged in.

A receipt was sent to your email.