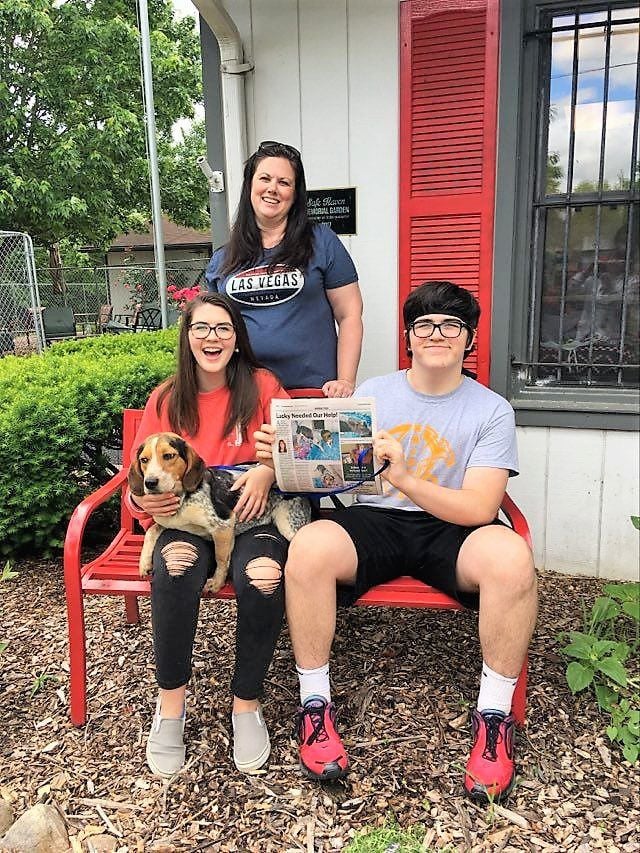 Lucky/Baxter with his family going home on Thursday. 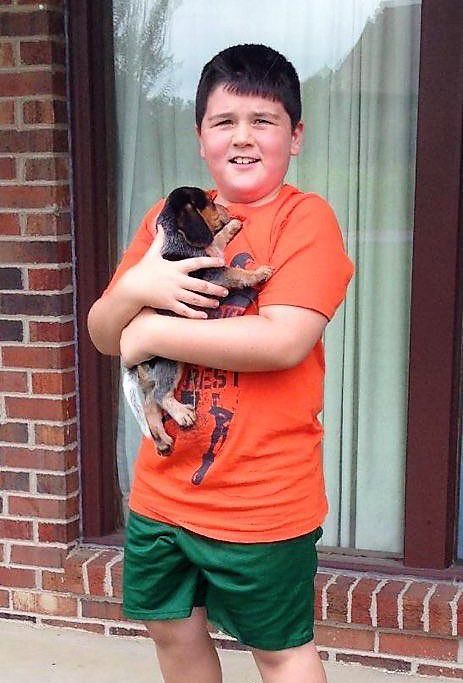 Baxter with Cash four years ago as a puppy.

Lucky/Baxter with his family going home on Thursday.

Baxter with Cash four years ago as a puppy.

Little did I know that after sharing Lucky’s story last Saturday in the Animal Talk section of The Greeneville Sun, his life was going to take another, but better, turn.

Lucky, a Blue Tick Beagle mix dog, arrived at the Humane Society’s Adoption Center after being found and treated for a gunshot wound to his upper back. Though in pain and healing from his wound, Lucky adapted to the daily routine of shelter life and quickly became a favorite of staff and volunteers.

Last weekend after reading the story of Lucky and seeing the photos from Animal Talk on the Humane Society’s Facebook page, Christy Paysinger realized that Lucky looked exactly like her family’s dog, Baxter, who had disappeared without a trace three years prior. Christy decided that as soon as the Adoption Center opened on Tuesday, she was going to meet Lucky to see if he was indeed their missing dog.

When Tuesday arrived, Christy, accompanied by her daughter, Jocelyn, came to the Adoption Center and told me the story of their missing dog, Baxter. Baxter had been a gift for Cash, Christy’s son, from his grandfather. Cash and Baxter were inseparable during Baxter’s first 10 months of life, but one day, the curious dog took off and the Paysinger family never saw him again. Though the family searched for him, their efforts proved futile. Heartbroken, the family never gave up hope of finding their much loved dog. After telling me their sad story, I took them to the dog kennels to meet Lucky who was still recovering from his gunshot wound. Upon meeting Lucky, Christy and Jocelyn were certain it was their missing Baxter, but because three long years had passed, they decided to bring Cash to the Adoption Center the next day to get confirmation.

Anticipation was high at the shelter on Wednesday when the Paysinger Family arrived with son, Cash. When Cash met Lucky, there was no doubt. Lucky was indeed their missing Baxter. Cash and Baxter were equally happy to see one another after so many years! Cash wanted to take Baxter home immediately, but Baxter needed one more day of medical treatment before going home. The family had to wait one more day to bring Baxter home. The following day was a happy day for Lucky/Baxter, staff and the Paysinger Family. It was a happy sight to see this precious dog loaded into the car with his loving family.

I am excited to share this “happy ever after” story and photos of a Blue Tick Beagle named Baxter that is now at home with his best friend, Cash.

Thank you to everyone that helped by donating to Lucky’s/Baxter’s vet care. Not only did he get the help he so desperately needed, he got to return to the loving arms of his family.