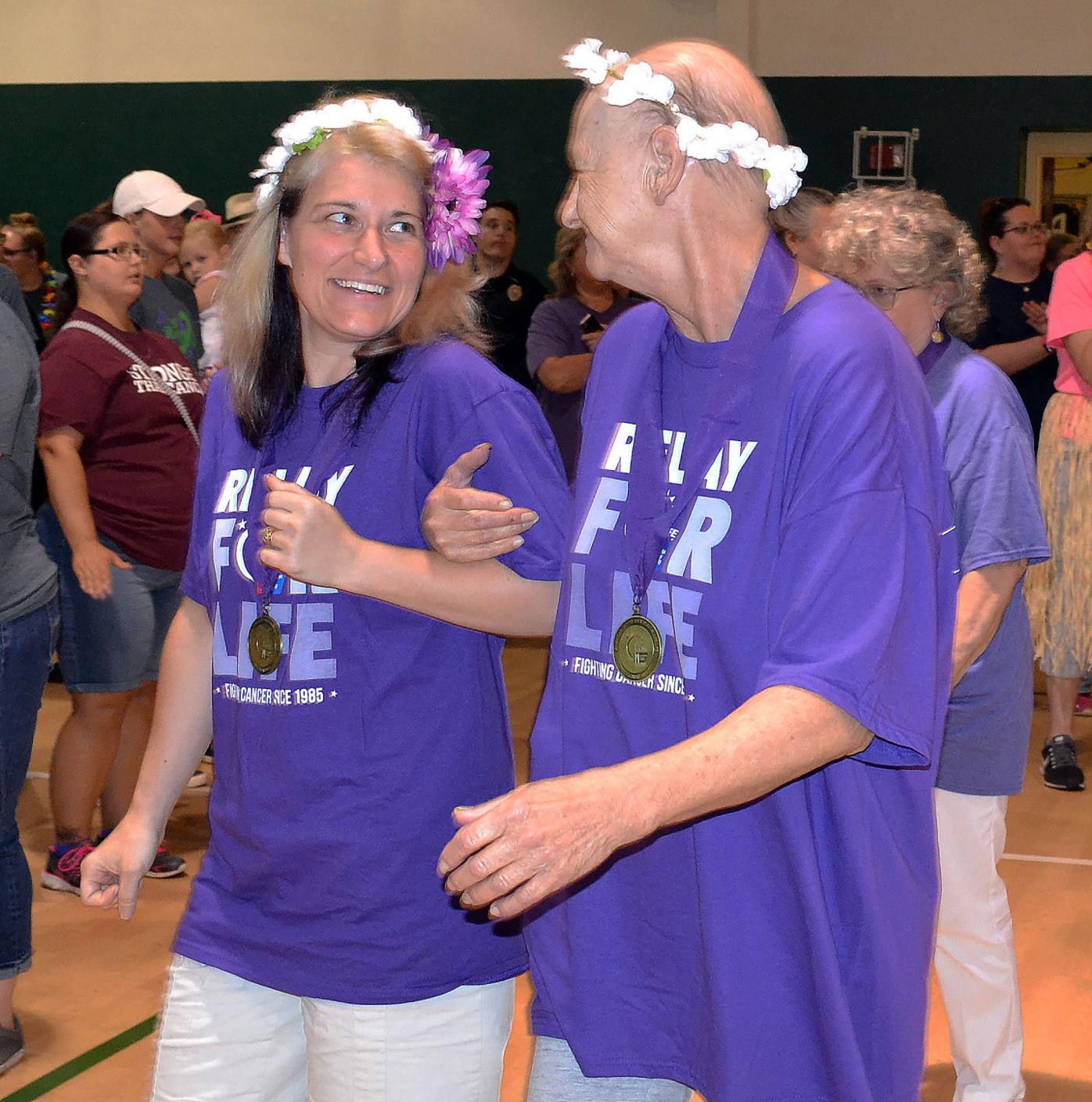 Dawn Goolsby, left, walks the Survivors’ Lap with her friend Patsy Manier at the annual Relay for Life event. 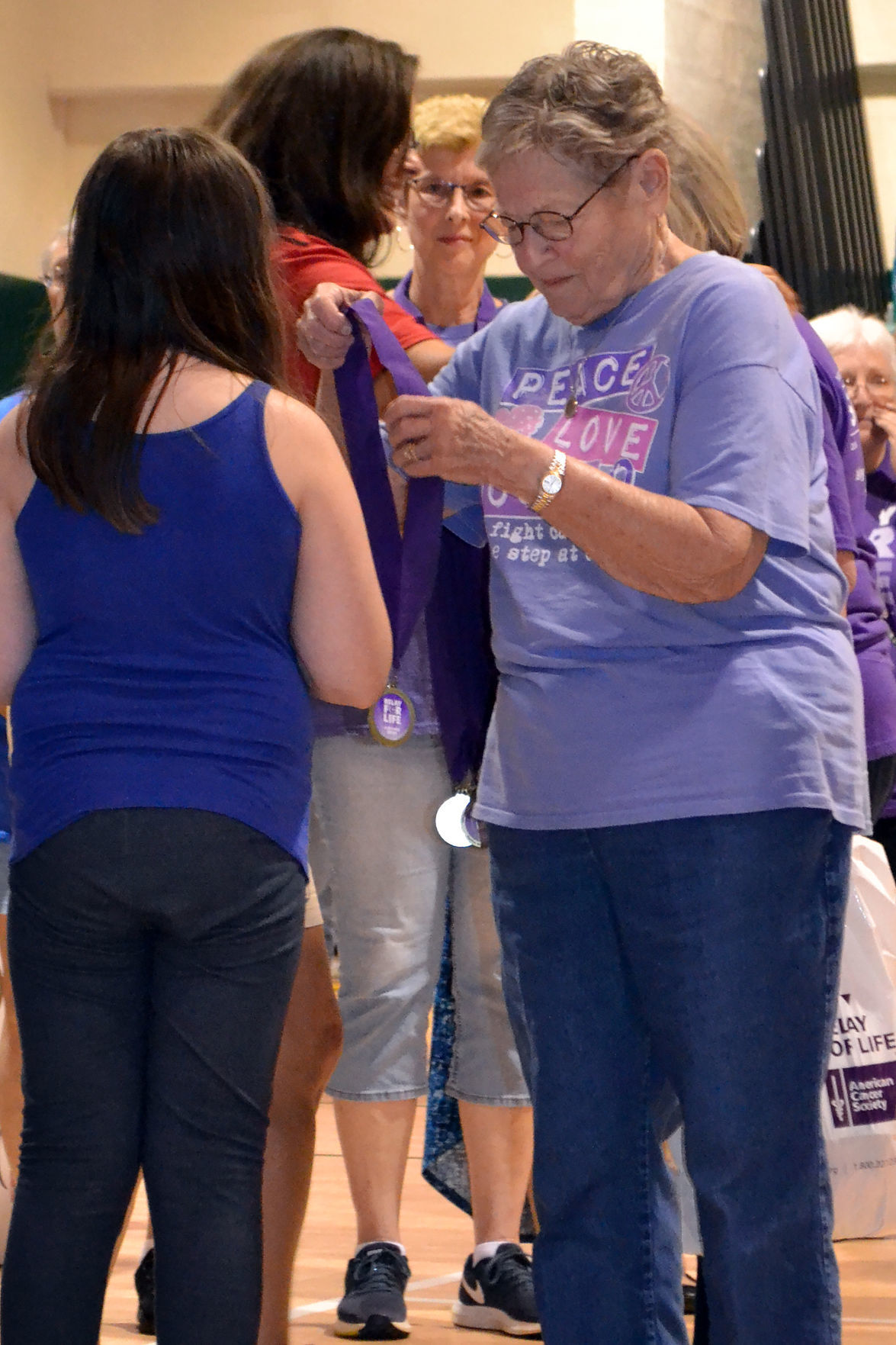 Caroline Russell receives her cancer survivor medal before walking in the Survivors’ Lap. 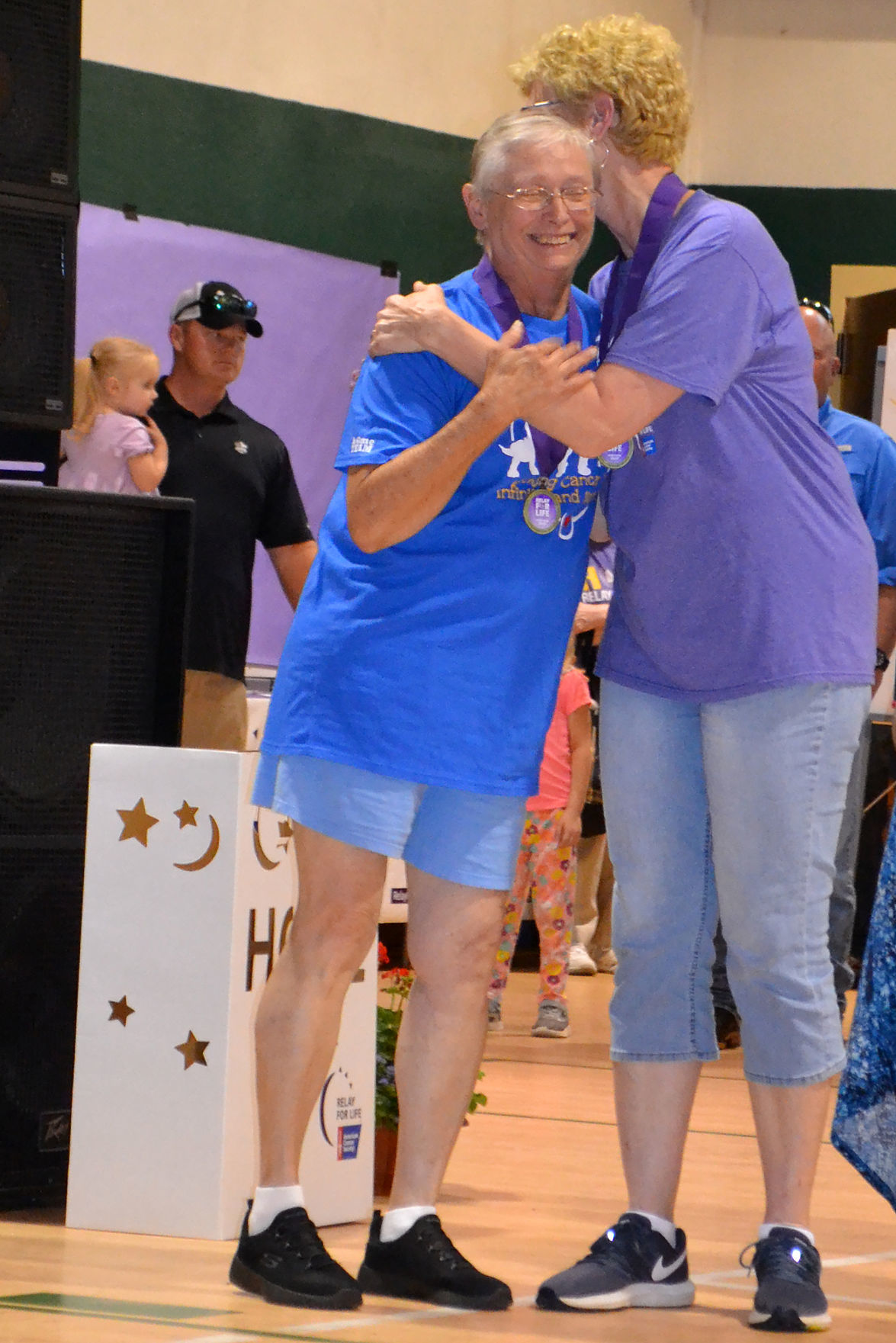 Mitze Kemp, a four-time cancer survivor, receives a hug from speaker Paula Morrison. The two carried the Survivor banner together during the Survivor Victory Lap. 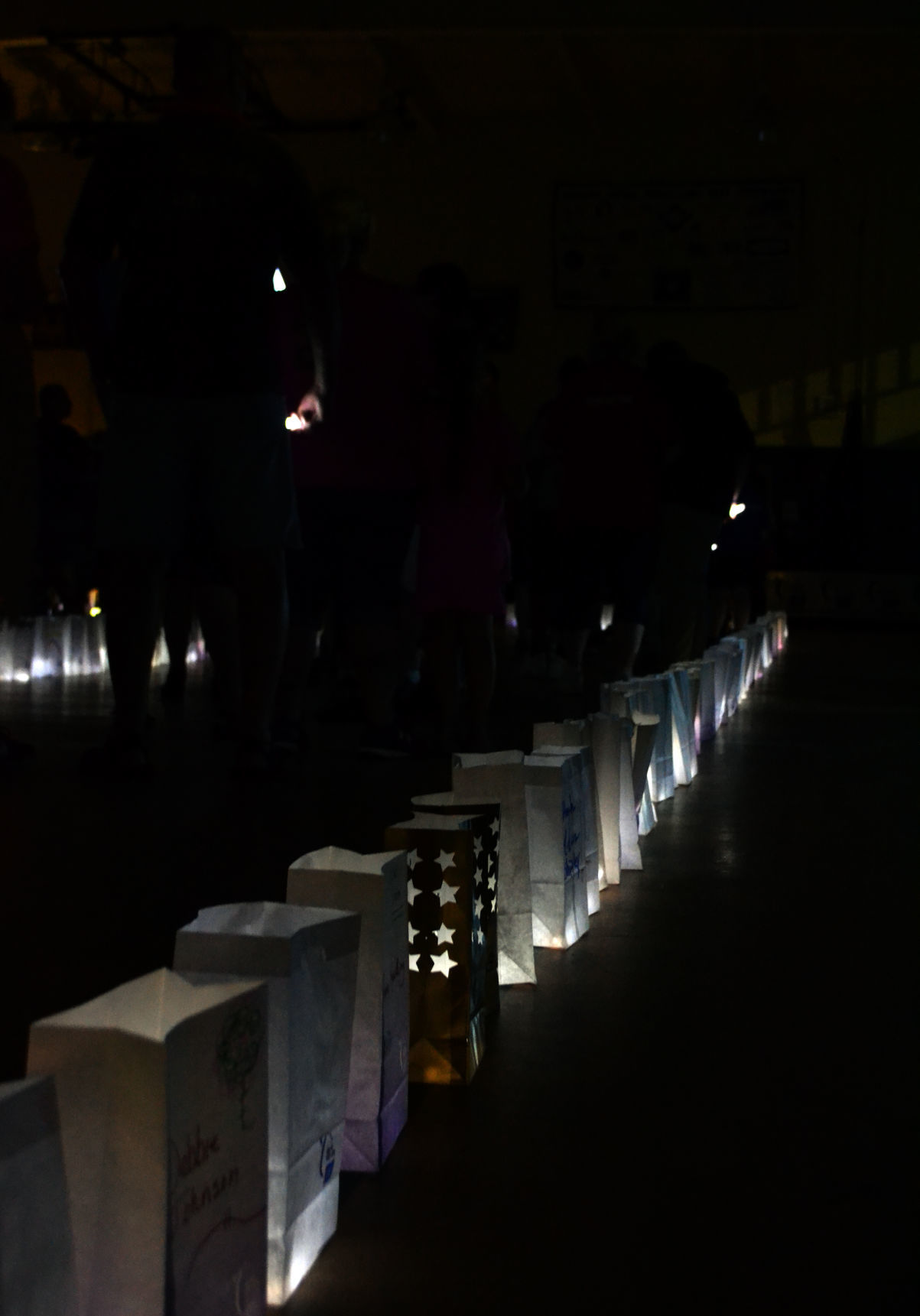 Each lighted paper bag represents a person who was affected by cancer, whether deceased, surviving or care taking for a loved one.

Dawn Goolsby, left, walks the Survivors’ Lap with her friend Patsy Manier at the annual Relay for Life event.

Caroline Russell receives her cancer survivor medal before walking in the Survivors’ Lap.

Mitze Kemp, a four-time cancer survivor, receives a hug from speaker Paula Morrison. The two carried the Survivor banner together during the Survivor Victory Lap.

Each lighted paper bag represents a person who was affected by cancer, whether deceased, surviving or care taking for a loved one.

The Greeneville High School gymnasium was a vision of purple Saturday evening, representing the strength, hope and resilience of cancer survivors.

The annual Relay for Life event, though forced indoors by weather, brought in a crowd of roughly 500 people.

According to the American Cancer Society, one of every three women and one of every two men will hear the words “you have cancer” in their lifetime.

“The first breath you take after hearing you have cancer is the breath of a survivor,” said Jessica Poff, the community development manager for the Greene County and Lakeway areas of the American Cancer Society.

The annual Relay for Life event, Poff said, is the one day of the year where every fundraising team comes together.

“It’s a big party,” she said. “This is one of very few social events where every demographic is represented. We’re all here in one place, with one goal and one cause.”

That cause is to bring an end to all types of cancer. The American Cancer Society conducts research to find a cure, and also financially aids those who are fighting the battle. The organization offers head coverings and wigs, transportation for doctors’ appointments and lodging for extended stays. Poff said that over 2,500 services have been provided this year.

“We also have a hotline for people to call at all times,” said Poff. “If you’re having a rough night, there will always be someone to answer the phone.”

To make this possible, individuals build up teams of volunteers who raise money for the cause. Team Unaka, led by Denise Williams, has raised $60,000 this year, contributing to Greene County’s goal of $150,000.

“It’s truly a year-round effort,” said Poff. “It gives people the opportunity to do something about cancer.”

Over 25 businesses sponsor the Relay for Life event each year, meaning that 100 percent of the proceeds from the event go back into reaching the fundraising goal. This year’s event, though inside due to the weather, was complete with live music and entertainment, food, games and a silent auction.

“It’s wonderful to see the same faces year after year,” said Poff. “People take the time out of their busy schedules to remember the struggle and loss that is caused by cancer.”

Guest speaker Paula Morrison told the audience the story of her own battle with cancer that began last March.

“I was running late for my mammogram appointment and I thought to myself, ‘I’ll be fine, I’ll just skip it,’” she said. Weeks later on her husband’s birthday, she received the dreaded call no one longs to hear.

“I had a 6-centimeter lump in two of my lymphnodes,” said Morrison.

The news of her breast cancer caused her to start asking many questions, including, “Would I be cured? Would I survive? Could I handle the major surgeries?”

Just over a year later, she stood in front of a crowd of fellow survivors and gave God the credit for her health.

“He gave me the strength to place my trust in him,” said Morrison. “This experience was passed through the hands of my creator, and I am grateful and thankful for the physical and spiritual health that my God has provided.”

Through cancer, Morrison said that she developed a new circle of friends and a new outlook on life. Through weeks of chemotherapy, a double mastectomy, 24 days of radiation therapy and reconstructive surgery, she knew that she was in good hands.

“I’ll never ever forget how wonderful these people have been to me and my family,” she said. “I want to continue to serve the American Cancer Society as much as I can for as long as I can.”

Following Morrison’s testimony, survivors were given a medallion to wear as they took a lap of victory around the gymnasium. Another lap was taken where caregivers were allowed to join their loved ones.

“Praise God,” said Morrison. “He’s there for me in my story, and he is there for you in yours. We serve a personal God.”

The event concluded with the annual Luminaria ceremony, where glow sticks illuminated paper bags. The white bags represented those who have died, whether from cancer or other causes. The purple bags were lit in honor of cancer survivors, and gold bags were placed in line to honor caregivers.

“The Luminaria ceremony is my favorite part,” said Poff. “That’s the one time of day that everyone is completely silent. Every bag represents someone’s story.”