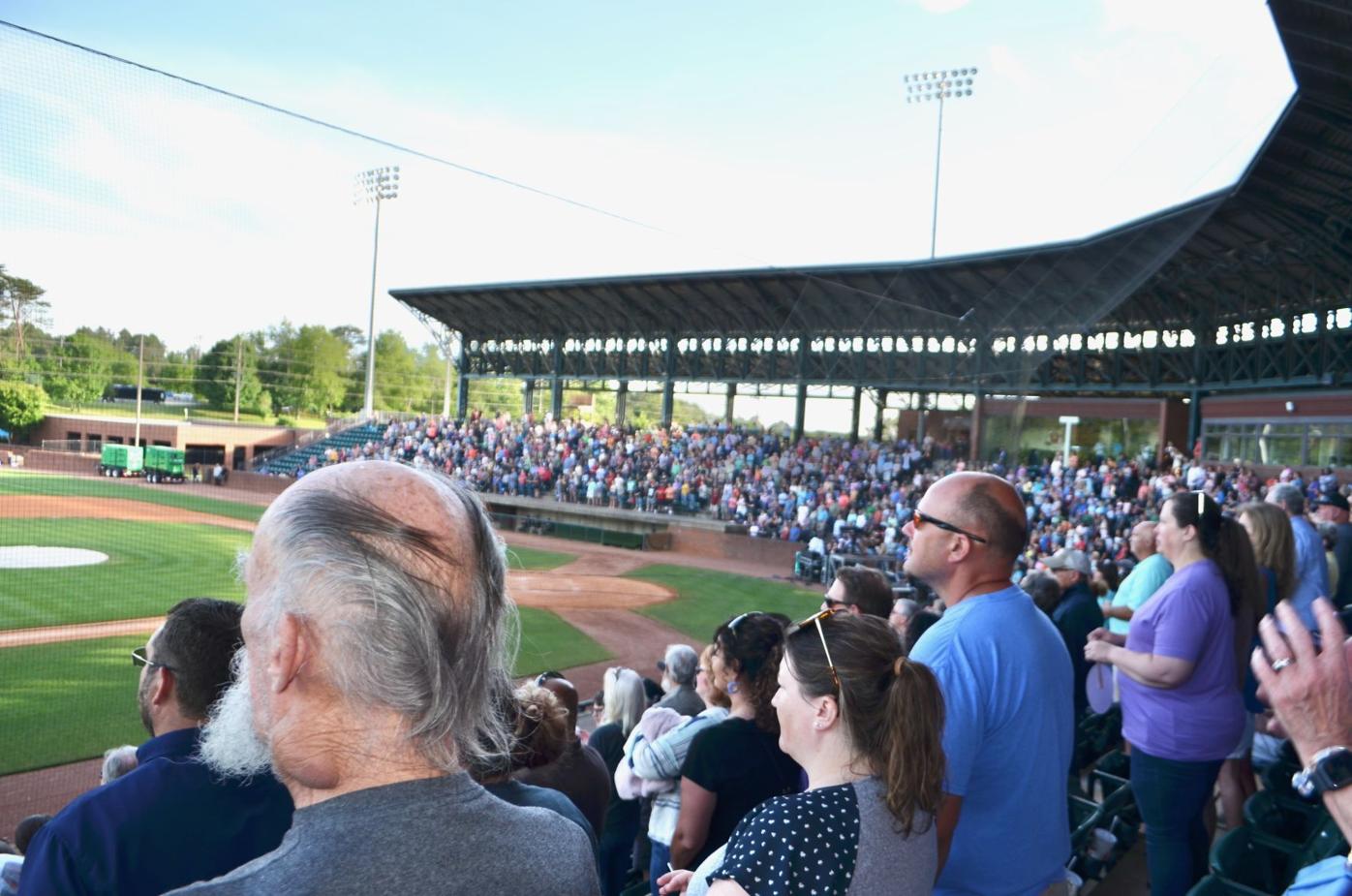 About 2,000 people packed the Pioneer Park stadium last Friday for a concert by the Christian pop band MercyMe. 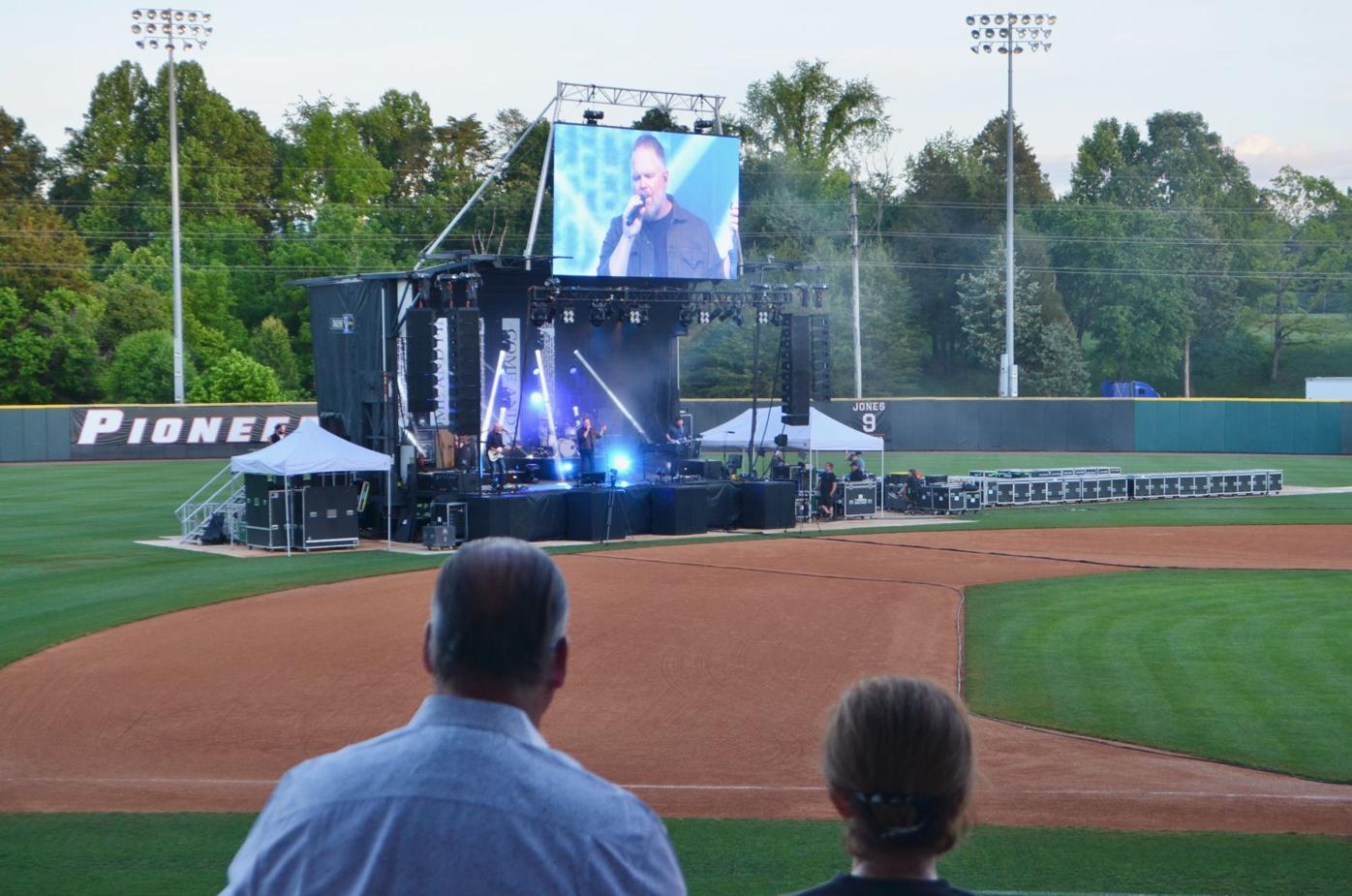 The contemporary Christian music band MercyMe played Pioneer Park stadium as part of their Live and Outside Tour. The tour has the band playing minor league baseball stadiums across the U.S.

About 2,000 people packed the Pioneer Park stadium last Friday for a concert by the Christian pop band MercyMe.

The contemporary Christian music band MercyMe played Pioneer Park stadium as part of their Live and Outside Tour. The tour has the band playing minor league baseball stadiums across the U.S.

MercyMe batted a thousand in their concert Friday night before roughly 2,000 people at Pioneer Park’s stadium in Tusculum.

MercyMe is a contemporary music band with many hit singles and albums. They performed in Tusculum as part of their Live and Outside Tour in minor league baseball stadiums across the U.S.

The concert stage was erected behind second plate on the stadium’s baseball field, which placed the band a considerable distance from the enthusiastic audience. In fact, Bart Millard, lead singer of MercyMe, opened by commenting, “You all are like 10 miles away.”

He asked them to cheer loudly so the band could hear them. The audience complied.

Millard said the live show, part of their first tour in over a year, was in part designed to bring uplifting and upbeat music to an audience wearied by concerns about the Covid pandemic.

The band performed “Happy Dance” off their “Lifer” album. and at Millard’s urging, almost everyone in the audience stood up and danced at their seats, or otherwise grooved to the song, prompting Millard to joke “With our new album, I hope you get caught dancing at a red light.”

The band also sang a disco song, “Brand New,” which they recorded on their newest album “inhale (exhale)” with disco queen Gloria Gaynor.

One young man in the audience danced to the song in one of the signature moves from the discoteque era of the late 70s and early 80s.

On a more serious level, MercyMe performed the emotional ballad “Almost Home” as a pinkish sunset stretched across the sky behind the stage.

The band sang the lyrics, “Well this road will be hard / But we win in the end / Simply because of Jesus in us / It’s not if but when / So take joy in the journey ... Don’t forget what lies ahead ... We are almost home.”

In the introduction to the song, “Let Yourself Be Loved,” Millard asked rhetorically, “Whatever happened to, ‘Love your neighbor as yourself?’ ... The problem is we don’t care much for ourselves.”

Millard then said emphatically that the message he wanted to give the audience was: “The God of everything adores you.”

At another point in the concert, Millard asked the audience, “When nothing seems to go right, is He still good?”

The band then played, “Even If.”

The band also performed their crossover hit “I Can Only Imagine,” much to the delight of fans.

The single earned MercyMe a Dove Award in 2002 for song of the year, and is still heard on Christian music radio stations today.

“I Can Only Imagine” is also the name of a movie released in 2018 that is based on Millard’s real-life experience of harsh physical abuse by his father. Millard eventually reconciled with his father, whose role in the movie was played by Hollywood actor Dennis Quaid.

MercyMe was officially formed in 1994 at a Baptist church in Edmond, Oklahoma.

The somewhat quirky name of the band reportedly originated during Millard’s time as a youth ministry intern. The story goes that his grandmother, concerned that her grandson was home whenever she called, would exclaim, “Well mercy me, why don’t you get a real job?”

Micah Tyler opened the concert with an energetic set. At one point, Tyler asked everyone in the audience to shout out the name of an Old Testament person. He then picked one name, Moses, and proceeded to compose lyrics on the spot about Moses’ life story to the tune of pop singer Justin Bieber’s hit, “Baby”.

Tyler was well received by the audience.

A Tusculum University spokesman said Friday, before the evening’s performances, that the school had not currently scheduled any further concerts at Pioneer Park.