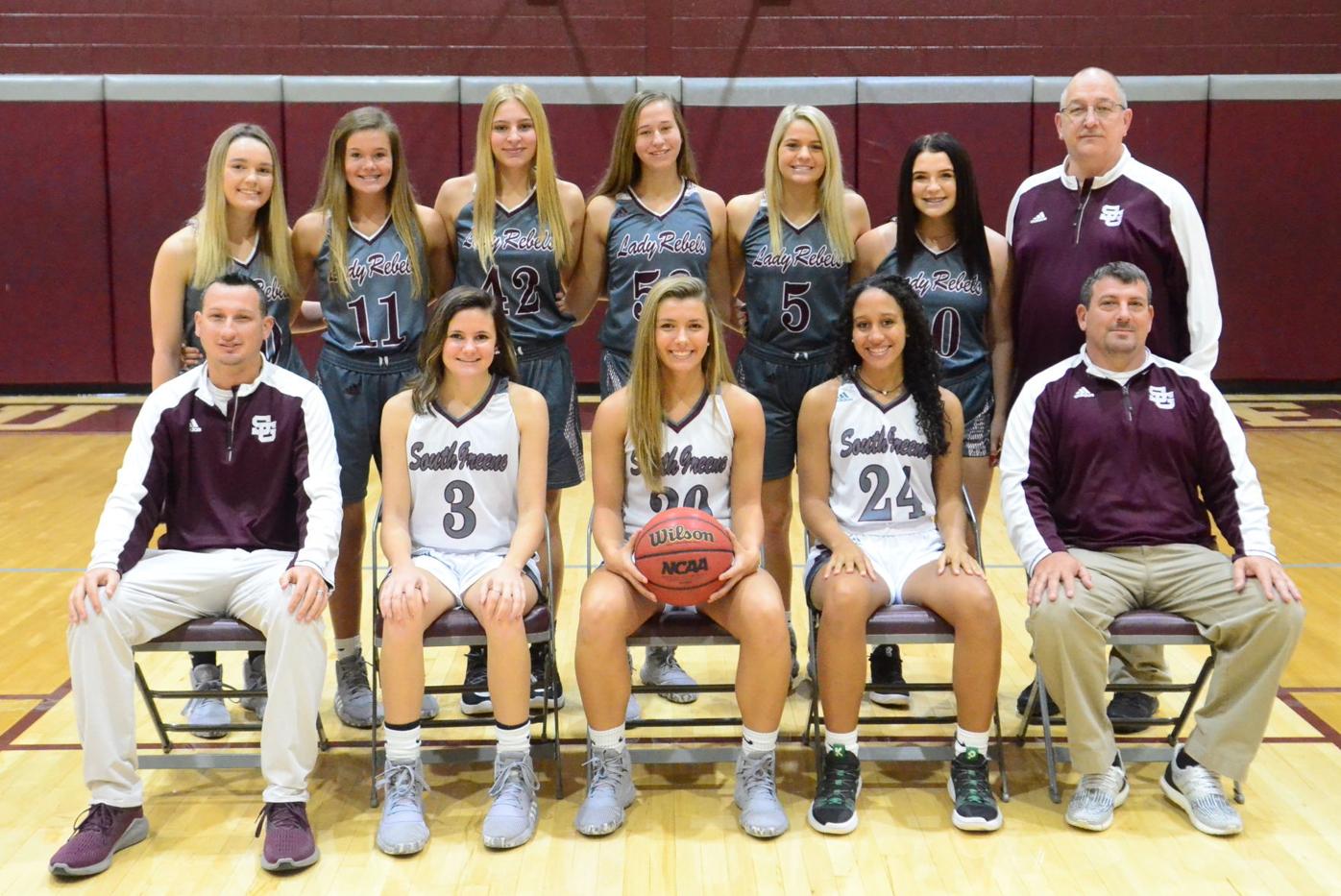 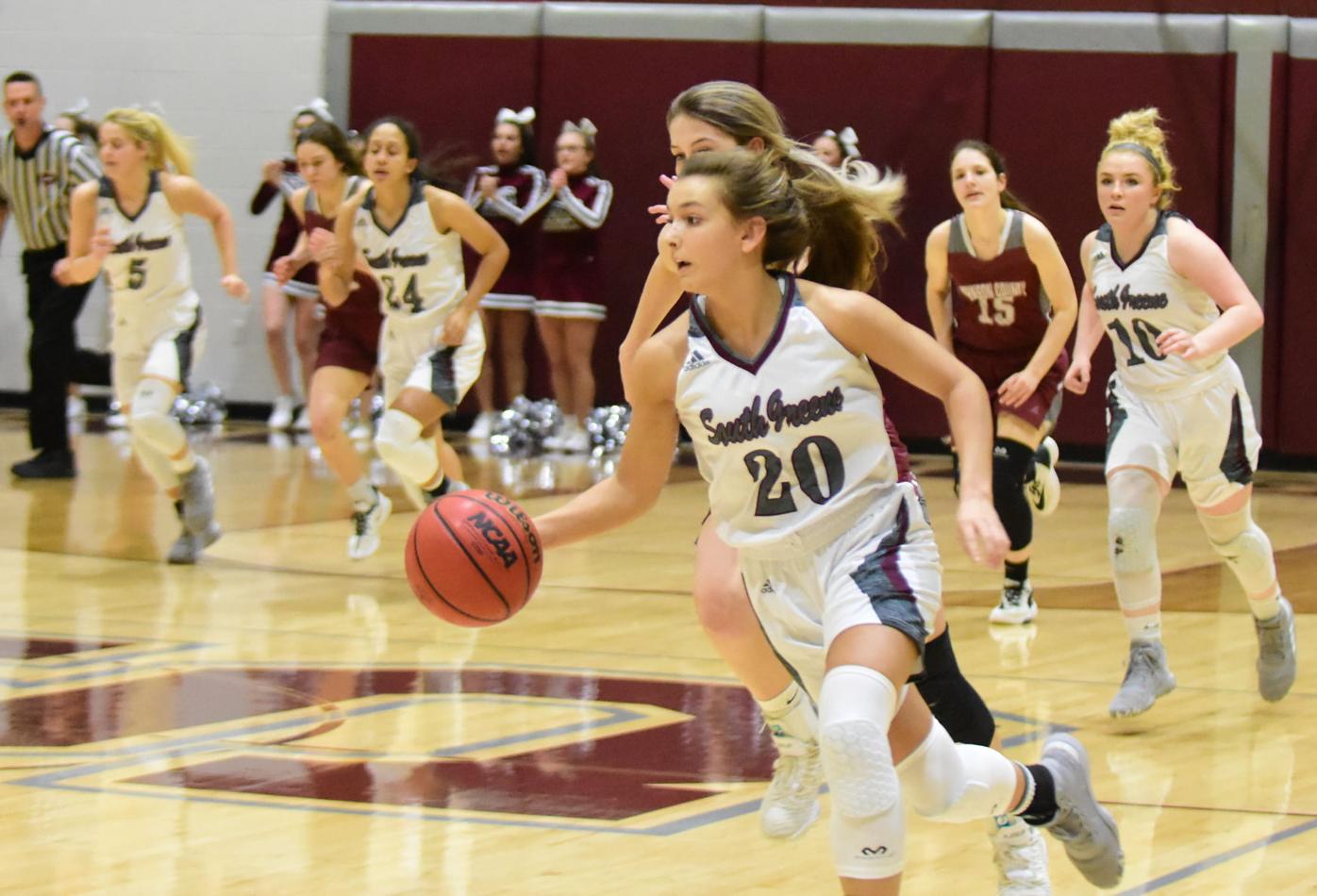 With seven players back who were in the playing rotation last year, coach Stephen Gregg has high hopes for this year’s edition of the South Greene Lady Rebels.

Coming off a 24-8 season of a year ago, the tradition-rich Rebels missed out on a state tournament trip, losing in the regional semifinals to old nemesis Grainger. Only one senior, Jalyn Casteel, graduated off that team.

“It’s the first team I’ve had that never lost a game in the summer,” quipped Gregg with a smile. “Of course we never won one, either.”

The loss of summer camps and training is a blow to all teams, the coach said, but the biggest thing is the freshmen never got a chance to really experience the speed of the high school game and see how different it is from what they’ve been accustomed to.

“Our priority is the safety of the kids, always,” Gregg said, speaking of the COVID pandemic. “This season could be a tricky one. There are no barriers in playing basketball … a lot of sweat and everybody handling the ball.”

With nine players on the current roster, seven of them have playing experience at the varsity level.

“We are doing it day by day, practice by practice, and I can’t say who the starting five will be,” he said. “We may not know until warmups on game day who will start. It does make it hard for people to prepare for us. But we’ve got a lot of friendly competition going on in practice, and that’s good because it keeps everybody focused.”

With a normal schedule that is loaded with good competition, including a district that is always strong but may be exceptionally loaded this time around, Gregg knows come March the team’s record might not be indicative of how well they’ve played.

“Our district is loaded,” he said. “I think Grainger is the favorite. We never figured them out last year. They swept us. Greeneville is a year older. I think we can be in the mix, but we’ll have to play well every night.”

The three Rebel seniors each offer something unique, Gregg noted. Kiley Collins, a 5-7 guard, might garner the most attention from opponents’ scouting reports.

“She’ll get a lot of attention, no doubt,” he said. But we think Haley Kells (5-7 guard) and Jaden Merriweather (5-8 post) will take some of that focus off Collins because people know they can score, too.”

Collins, Gregg said, is one of the best set shooters he’s ever had.

“She’s got to shoot more off the move, and that’s something we’ve worked on,” he said. “And she must finish her shots.”

Kells, he added, is a streaky shooter who can fill it up from the wing position at times.

“She did a great job for us last year,” he said of Kells, who recently signed a track scholarship. “Her speed and leaping ability is a real asset.”

Merriweather is also a veteran and somebody the coach will look to for whatever position on the floor she’s needed.

“She battles hard in the paint, but we can throw her in there anywhere and she responds,” he said.

Addison Williams, a 5-9 junior, will be in the paint and will have to be counted on to excel at rebounding.

“We’ll still run our offense through the post, so she will have to get some touches,” he said. “She seems to be really focused this year, and we want her to have the ball in her hands.”

“She’s a true point guard, and she’s coming off a very steady year,” Gregg said. “We expect her to be the floor general. She’s a good passer. She’s worked hard to change her stance and shooting style. She can be a coach on the floor, and you need that from the point.”

Jordyn Roderick, a 5-10 junior, has the length to be a force and Gregg calls her “a diamond in the rough.”

“She played point guard in middle school, so if Woods get in trouble we can use her out there, or we can move Jayden out front,” he added. “She’s not strong enough yet to battle in the post. But early on anyway we need her on the perimeter. She’s an excellent ball handler for her size.”

Amelia Mullins, a 5-6 junior, got in plenty of minutes her sophomore season. She can be, the coach said, a sparkplug who can give the team a quick turnaround.

“We want her to be a lockdown defender,” he said.

Freshman Ava Clark is a 5-10 freshman, and the coach said she still doesn’t know her ceiling.

“She’s still learning the high school game, but the light bulb will click on soon,” he grinned. “She doesn’t know not to shy away from the older girls. She will battle.”

Haley Susong is a 5-7 sophomore who will be counted on for minutes as well.

Gregg said he hopes that sophomore Macey Snapp can be moved up to the varsity soon.

“She’s a volleyball player that we coaxed into coming out to help us,” Gregg said. “She won’t back off. She can be physical and we want her to be a rebounder for us.”

In addition to trying to focus on Collins, Gregg said most opponents will also key on Merriweather and try to shut her out. That will mean some others must step up.

“We are all pretty decent shooters,” he said. “Roderick can put it on the floor and hit some runners in the lane. Woods will need to hit some shots outside, too.”

“I’m stubborn, but I’ve been around long enough now to know that we can’t out-man everybody and play 90 feet of heat the whole game,” the coach said. “We’ve got to mix it up some and play both man and zone. We need to be able to put them in a defensive situation that will allow them to be successful. We will still do some full-court press to either slow down or speed up a team. We’ve got our half-court trap in. It’s going to be interesting to see just how this season unfolds.”

The team opens the year with a pair of Hall of Fame games on the road at Lakeway Christian where they will take on powerhouses Maryville and Alcoa. Then comes an early tournament at Sullivan East before they get into league play.