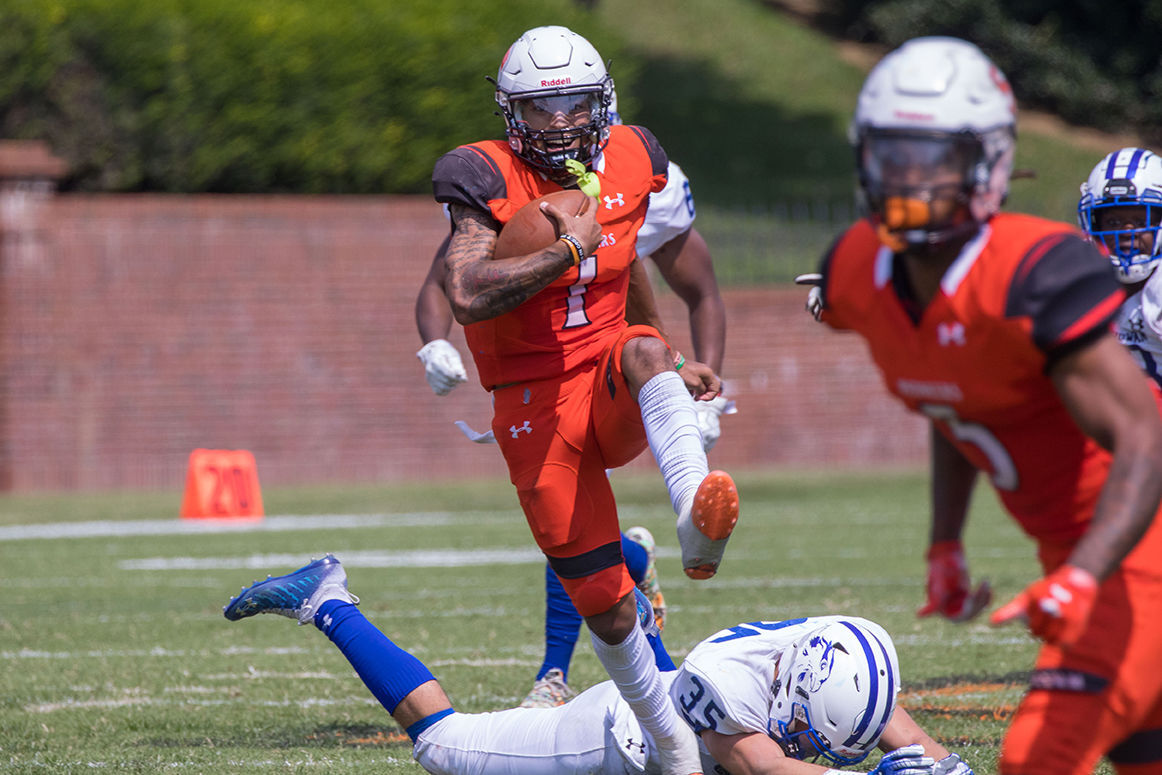 Tusculum quarterback Ivan Corbin (1) completed 20 of 35 passes for 239 yards and two touchdowns, and also rushed for 93 yards and a touchdown in the Pioneers’ 46-38 double-overtime loss to Chowan on Saturday. 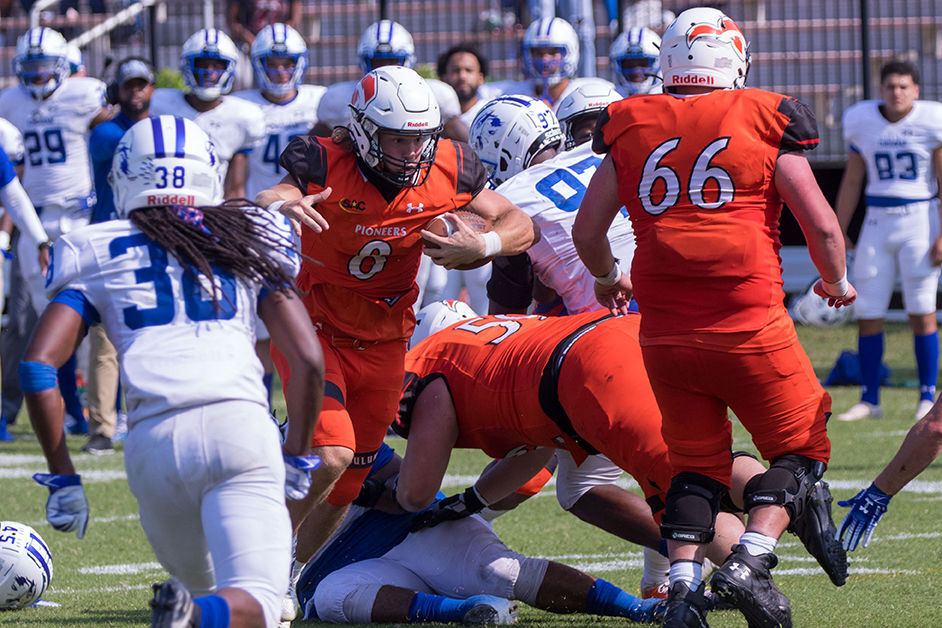 Tusculum’s Bryce Moore (8) runs with the football during a 46-38 double-overtime loss to Chowan on Saturday.

Tusculum quarterback Ivan Corbin (1) completed 20 of 35 passes for 239 yards and two touchdowns, and also rushed for 93 yards and a touchdown in the Pioneers’ 46-38 double-overtime loss to Chowan on Saturday.

Tusculum’s Bryce Moore (8) runs with the football during a 46-38 double-overtime loss to Chowan on Saturday.

Chowan quarterback Bryce Witt passed for 274 yards and accounted for three touchdowns to lead the Hawks to a 46-38 double-overtime win over Tusculum on Saturday afternoon at Pioneer Field in the first meeting between the two schools.

Chowan, which won last week 30-24 in overtime at Mars Hill, is off to the program’s first 2-0 start since 1999. Tusculum (1-1) has its five-game winning streak halted, while also suffering its first home setback since 2019 ending a run of four in a row.

The Hawks outgained the Pioneers 460-352 in total yardage including 240-126 margin in the third and fourth quarters.

The Hawks overcame a pair of first half double-digit deficits and outscored the Pioneers 29-14 in the fourth quarter and the two overtime periods combined. TU led 21-7 following a 38-yard interception return by Trey Trawick early in the second quarter and took a 24-14 lead with 33 seconds left in the period on Eli Shepherd’s 26-yard field goal.

Chowan captured some of the momentum heading into the locker as kicker Jude McAtamney crushed a 47-yard field goal on the final play of the half as the Hawks trailed 24-17 at the intermission.

Tusculum QB Ivan Corbin went 20-for-35 for 239 yards and two touchdowns. He also rushed for 93 yards and a touchdown as the Pioneers did not commit a turnover on the afternoon.

Tusculum took the opening possession and marched 68 yards on four plays, capped off by Corbin’s 35-yard scoring strike to Justice Parham. Shepherd’s kick made it 7-0 at the 13:15 mark of the opening quarter.

Chowan would be forced to punt on its opening possession and the Pioneers were looking drive in for more but TU would stall at the CU 25-yardline.

Witt completed a 60-yard pass to Sam Dunn to the TU 12 and the Pioneers were whistled for roughing the passer on the play moving the ball to the six-yard line. The Hawks moved to the one-yard line and on fourth and goal, Witt called his own number and lumbered into the end zone to tie the game at 7-7 at the 3:20 mark of the quarter.

Tusculum took over at the 50 to start the second quarter and converted on fourth down twice thanks to a Corbin run and a roughing the passer call on Chowan to extend the drive. Corbin would end the 10-play drive with a five-yard sprint to the end zone as TU regained the lead at 14-7.

On the next possession, Witt was intercepted by Trawick as he scored on the pick-six as the Tusculum scored its third defensive touchdown of the young season as the Pioneers extended the lead to 21-7 with 10:48 left before halftime.

The Hawks bounced back on its ensuing drive as Watkins returned the kickoff 26 yards to the CU 42. Witt completed a 17-yard pass to Malik Tobias on third-down and 10 and Witt found Watkins on a 22-yard TD strike to pull Chowan within 21-14 with 6:07 remaining in the quarter.

TU went three-and-out on its next time with the football and Chowan took over in great field position at its own 46. But the Tusculum defense came up with its second interception of the quarter as Lovett’s interception and 22-yard return gave the home team the ball at the CU 31 with three minutes before halftime. Tusculum went to the ground game and as Corbin opened with a 26-yard run to the CU five. But three straight running plays would result in minus-four yards as TU settled for a Shepherd 26-yard field goal for a 24-14 lead with 33 seconds left.

Chowan took over at its 36 and Witt ran for 21 yards and a Tusculum holding penalty on the play tacked on 10 more yards moving the ball to the TU 33. Chowan would set up for a McAtamney field goal as his 47-yarder split the uprights to trim the Tusculum lead to 24-17.

In the third quarter, neither team would score as Chowan out-gained Tusculum in yardage 113-4 as the Pioneers went three-and-out on its three possession. The TU defense forced a pair of punts and took over on downs.

Early in the fourth quarter, McAtamney’s 36-yard field goal try went wide right as Tusculum held onto the 24-17 lead. Tusculum was penalized for holding on the first play of its initial possession of the quarter and could never get ahead of the chains and would be forced to punt from its end zone.

Chowan took over near midfield and on the first play of the drive, the Hawks went to the playbook as Witt threw a lateral to receiver Demetrius Moore, who completed a 51-yard strike to Laurence King for a 51-yard touchdown and tie the game at 24-24 with 11:30 left in regulation.

Tusculum drove into Chowan territory thanks to a Corbin 15-yard pass to Parham and a pair of defensive pass interference penalties on Chowan to move to the 36. But four incomplete passes including one on fourth down turned the ball over to the Hawks with 8:46 on the clock.

Chowan drove into Tusculum territory and Tyrek McNeil gave the Hawks their first lead of the day as he got free on a 39-yard sprint down the sideline. McAtamney’s kick made it a 31-24 lead for the visitors.

The TU offense came to life as Cortney Jackson ran for five yards, and Corbin completed passes of 22 and nine yards to Tyler Ajiero as the Pioneers moved across midfield to the CU 44. Runs of two and four yards, coupled with an offside penalty against the Hawks gave TU a first down at the 28.

Ajiero made catches of 14 and nine yards to get to the CU 5. Tight end and reserve quarterback Bryce Moore converted on third and one to the CU 4 and two plays later snuck into the end zone for the game-tying touchdown with 48 seconds remaining to send the game into overtime.

Tusculum had the opening possession of the first overtime as Corbin ran for seven yards on the first play and followed with a pass to Derrick Wright who made a one-handed grab in the corner of the end zone. Shepherd’s kick put the Pioneers back on top, 38-31.

Chowan wasted little time as Witt completed a pass across the middle to Tyrek McNeil and he sprinted to pay-dirt for the touchdown. McAtamney’s kick would tie the game and send the contest to a second extra period.

The Hawks would get the ball first. Following an incomplete pass, Witt scrambled for seven yards and Tobias rambled four yards for a first down. Witt found King for a 13-yard completion to the one-yard line and Jaylon Boyd finished it off from there with a touchdown plunge. Chowan would be forced to go for the two-point conversion and the Hawks went into their bag of tricks as Witt threw a lateral to King, who followed with a pass to Watkins in the end zone for the successful two-point try.

Tusculum fumbled on the first play of its possession, but were able to recover. After a two-yard rush, Corbin was flagged for intentional grounding, resulting in a 17-yard penalty and a loss of down. Facing third-down and 37-yards to go, Corbin completed a 27-yard pass to Wright setting up a more management fourth-down and 10-yards to go from the 25. A false start penalty moved TU back five yards to the 30. But Corbin’s pass just tipped off the outstretch hands of Wright to end the game.

Ajiero led Tusculum’s receivers with eight catches for 79 yards, while Parham had five receptions for 78 yards and a TD. Wright finished with four grabs for 67 yards and a score.

Chowan’s Montre Moore recorded a game-high 13 tackles including three for loss, while teammate Connor O’Brien added 10 stops for the visitors.

Tusculum’s Jahaud Russ tallied a career-high 10 tackles including nine solo hits, resulting in three tackles for loss. Trawick and Craig Watts finished with seven tackles and Kahmari Lovett had six tackles including two for loss, one pass break-up and an interception to set up a Tusculum score.

Chowan converted six of its 15 third-down conversions and went 1-of-2 on fourth down. Tusculum was 2-of-14 on third down and 1-of-4 on its fourth down tries.

The Pioneers will open South Atlantic Conference play next Saturday when they host Limestone University (0-1) for a 3 p.m. contest at Pioneer Field.