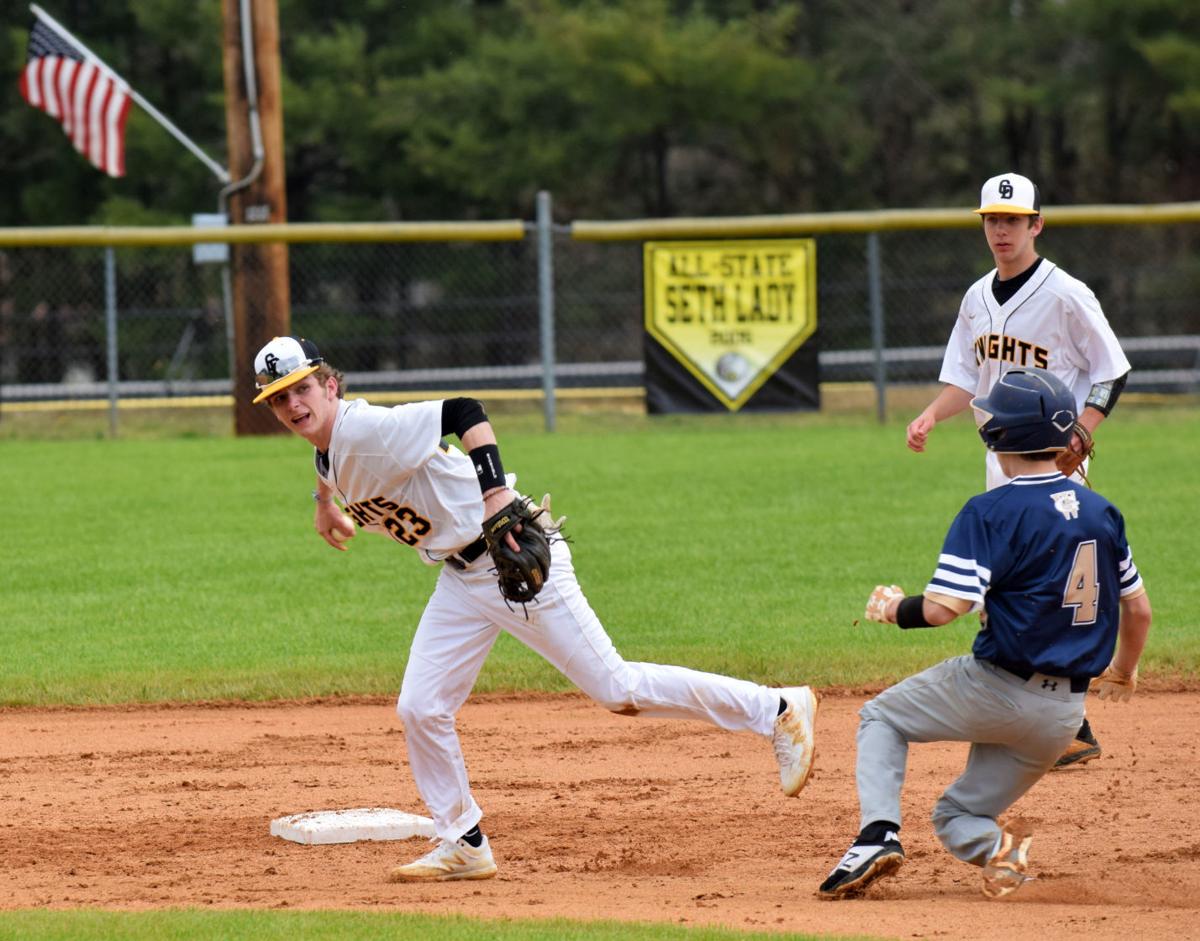 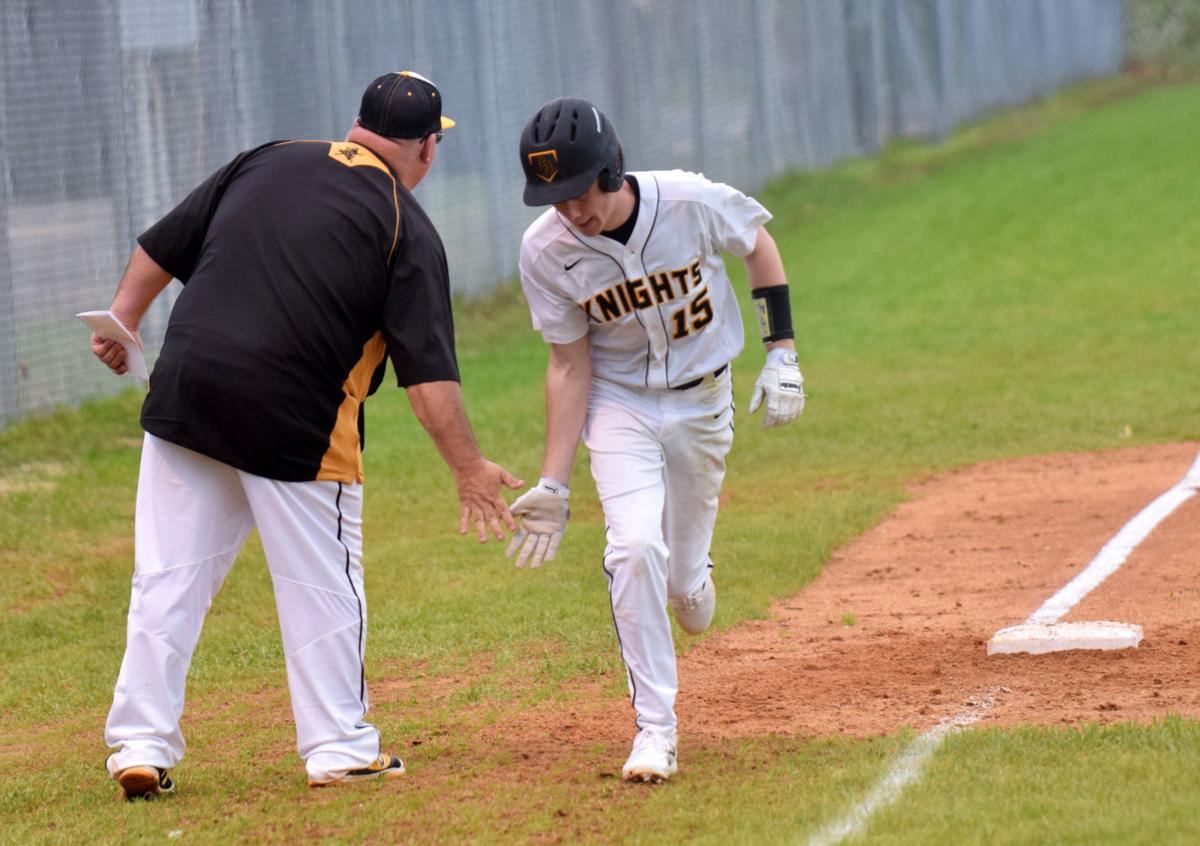 Chuckey-Doak’s Eli Sutherland (15) is congratulated by coach Jimmy Willett after hitting a home run during a doubleheader against West Greene at Chuckey-Doak on Monday. 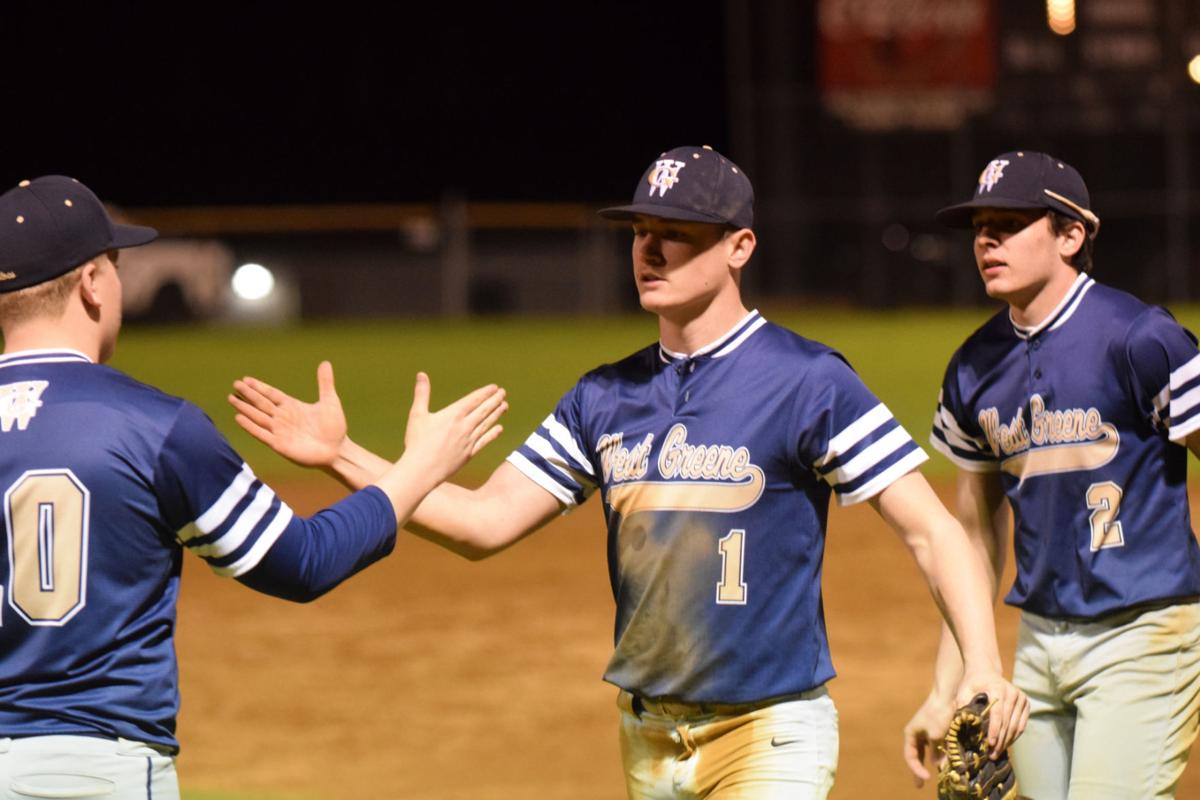 Left to right, West Greene players Kenton Cobble, Allen Vaughn and Trey Tweed celebrate a win during a doubleheader at Chuckey-Doak on Monday.

Chuckey-Doak’s Eli Sutherland (15) is congratulated by coach Jimmy Willett after hitting a home run during a doubleheader against West Greene at Chuckey-Doak on Monday.

Left to right, West Greene players Kenton Cobble, Allen Vaughn and Trey Tweed celebrate a win during a doubleheader at Chuckey-Doak on Monday.

AFTON — Allen Vaughn gave himself a game to remember. And he’ll have an indefinite amount of time to build on it.

Vaughn pitched the full seven innings to wrap up Monday’s doubleheader, helping West Greene earn a split with a 2-1 victory after Chuckey-Doak had won the opener 11-6.

The junior walked five in the first two innings, but none after that. Vaughn surrendered six hits and one earned run, striking out 10 to collect the win.

“That’s the best game he’s had in a West Greene uniform,” Buffaloes coach Adrian Sauceman said. “He’s had several good games over the last two years, but that’s bar none the best one.”

In addition, Vaughn knocked a one-out double to right for West Greene’s sixth and final hit.

Bailey McIntyre delivered from his leadoff spot, scoring both times he got on base for West Greene (3-3, 1-2 District 2-2A). After Vaughn escaped a bases-loaded jam in the first, McIntyre reached on a dropped third strike. He scored the game’s first run when Keith Valentine hit into a 6-4 fielder’s choice, crossing home plate during a throw to first.

Kenton Cobble, Ryan Morehouse, Valentine, Sciarra and McIntyre all matched Vaughn with one hit each.

Wade Fletcher batted 2-for-3 to lead Chuckey-Doak, leading off the sixth by doubling to right-center. But Alick Daugherty caught a one-out pop fly and fired to Valentine, who doubled off Fletcher at second base. Matthew Palazzo, Jameson Cobble, Ball and Willett all had one hit for the Black Knights.

“We’re a young team,” C-D coach Jimmy Willett said. “We’re going to get better. We’ve just got to learn to control our composure. That’s the bottom line. If we can get over that, we’re going to be good.”

Palazzo entered the batter’s box with momentum clearly on Chuckey-Doak’s side. The Black Knights trailed 6-1 but had cut the deficit to two runs before his third at-bat. With two on and two down, Palazzo delivered from his cleanup spot.

He ripped a double down the left-field line, sending Eli Sutherland and Cobble home to pull Chuckey-Doak even, and an error allowed him to reach third. Cadin Tullock then reached first on a fielding miscue at shortstop, allowing Palazzo to score the go-ahead run and give the Black Knights a 7-6 lead. Palazzo, whose first-inning ground-ball single scored Cobble, went 3-for-4 with 4 RBIs. The junior sent home Willett on a two-out infield single in the fifth, making it a 10-6 game.

Tullock, who went 2-for-4 including a leadoff single in the sixth, scored Chuckey-Doak’s final run when Ball hit into a groundout. The freshman also helped begin the Black Knights’ 10-0 scoring run, lining a two-out single to left and sending Cobble home.

Then it was Fletcher who crushed a two-run home run over the left-field fence, cutting the deficit to 6-4.

Sutherland, who entered Monday with a batting average of .000, had already ended his drought with his fourth-inning leadoff single. But his early-season struggles quickly became an afterthought when he crushed a two-run bomb to center field, building a 9-6 lead in the fifth.

And while Connor Lamons went hitless, he did his part to keep the Buffaloes in check. He didn’t start but recorded all 21 outs, striking out 4 while allowing 4 hits and no earned runs in 7.0 innings pitched.

“Connor made up for it on the mound,” Willett said. “He’s a heck of a pitcher.”

Ball and Sutherland both hit 2-for-4 with Cobble, Willett and Fletcher getting one hit each.

Morehouse went 2-for-4 with 4 RBIs to lead the Buffaloes. His bases-loaded ground-ball single sent home McIntyre and Valentine for a 2-0 lead just four batters in. In the second, he knocked a base hit to shallow left, scoring Tevin Shelton and Valentine to give the Buffaloes a 6-1 cushion. But West Greene couldn’t muster any more runs, stranding six baserunners and recording just one more hit.

Cobble also went 2-for-4, hitting a ground-ball single to lead off the second. He then scored for a 3-1 lead on Daugherty’s ground-ball base hit up the middle. Daugherty’s courtesy runner Dacota Wood crossed home when Valentine hit into a fielder’s choice, making the score 4-1.

McIntyre and Valentine each had one of West Greene’s six total hits.

“Bailey is the perfect leadoff hitter for us,” Sauceman said. “He has a very high contact rate, always going to put the bat on the ball…very quick too. He creates a lot of offense for us.”

Due to the ongoing coronavirus pandemic, both teams now take a hiatus through at least April 3.