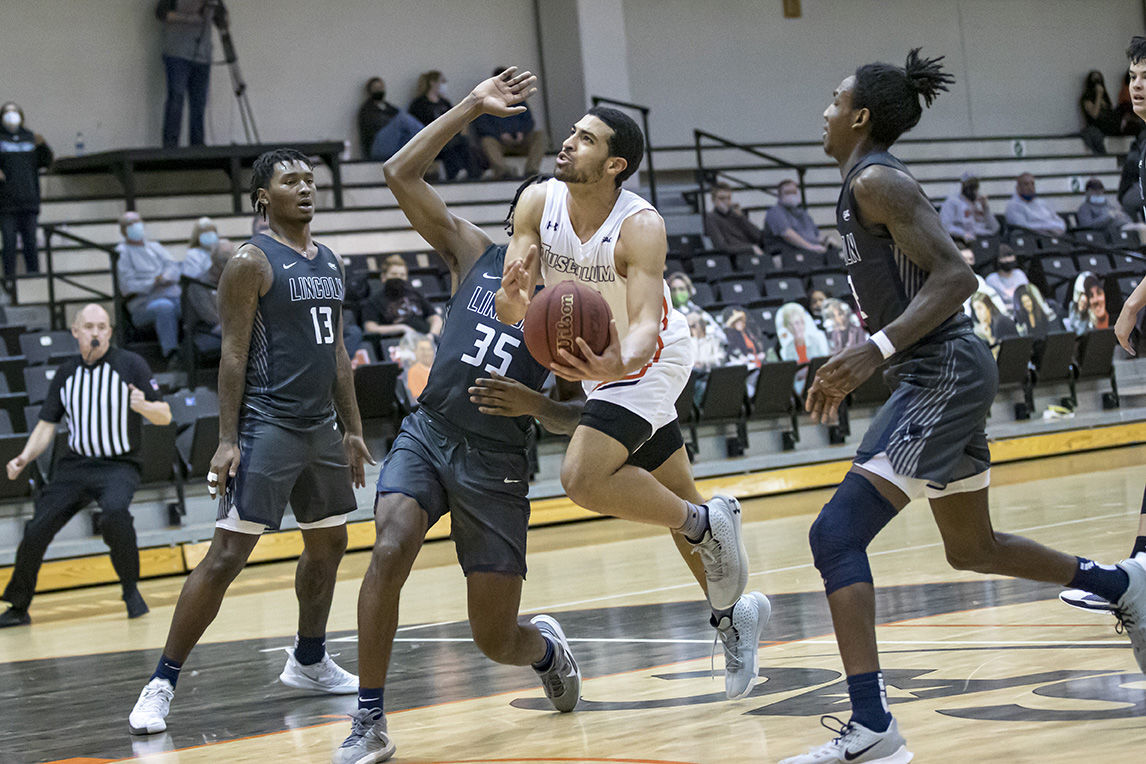 Tusculum’s Trenton Gibson (with ball) drives through traffic during a 90-74 upset of eighth-ranked LMU on Wednesday night at Pioneer Arena. 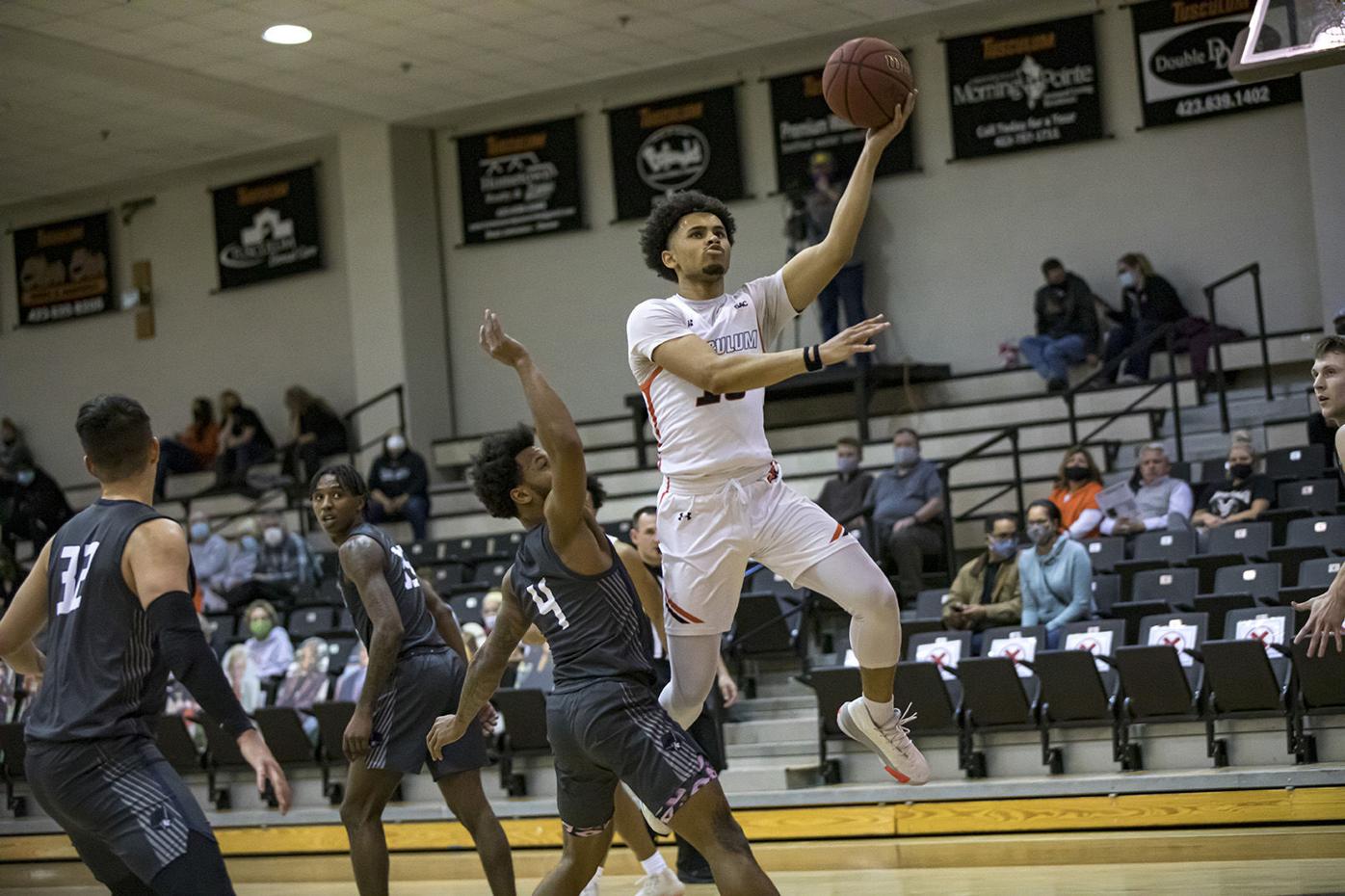 Tusculum’s James West IV takes the ball to the basket during a 90-74 upset of eighth-ranked LMU on Wednesday night at Pioneer Arena.

Tusculum’s Trenton Gibson (with ball) drives through traffic during a 90-74 upset of eighth-ranked LMU on Wednesday night at Pioneer Arena.

Tusculum’s James West IV takes the ball to the basket during a 90-74 upset of eighth-ranked LMU on Wednesday night at Pioneer Arena.

The Pioneers (10-4, 10-4 SAC) snap a four-game losing streak to the Railsplitters (16-3, 14-3) while remaining undefeated at home this season at 6-0. LMU suffers back-to-back losses for the first time since dropping three in a row to end the 2018-19 season, which included a 78-76 defeat at Tusculum, the Pioneers last win over the Railsplitters. TU also avenges last month’s 103-82 loss at LMU.

West finished with a season-high nine rebounds and shot 8-of-14 from the floor including four 3-pointers and dished out three assists. Gibson hauled in seven boards, dished out eight assists and posted two steals. Justin Mitchell finished the game with 12 points, four rebounds and a career-high five steals in the victory.

LMU’s Devin Whitfield accounted for a team-high 19 points, including 14 markers in the opening half. Xavier Bledson contributed 15 points, seven rebounds and six assists off the bench while Jordan Guest tallied 12 points and seven boards in the loss.

TU overcame an eight-point deficit (29-21) using a 22-4 run in a 5:10 span to take a 43-33 lead with 2:47 remaining before halftime. LMU trimmed the deficit to 45-40, but TU closed out the period with an 8-3 spurt to take a 53-43 lead into the locker room. Included in that run was an over-the-head, no-look pass by West to Justin Mitchell who put down the slam dunk. West scored the final points of the half with his tip-in just before the buzzer.

Whitfield hit a 3-pointer to open the second half to cut the TU lead to seven, but a jumper by Gibson and Justin Mitchell’s second dunk of the night extend the Pioneer lead back to double-digits at 57-46 with 18:23 remaining.

A three-point play by Bledson was followed by five straight points from the Black & Orange thanks to a 3-pointer by West and a dunk by senior Brandon Mitchell as TU led 62-49 with 15:52 to go.

Tusculum went scoreless for the next 2:38, but LMU could only get a pair of Guest baskets as the Railsplitters trailed 62-53 with 14:00 on the scoreboard.

The Pioneers went on a 14-6 run over the next four minutes as TU moved out to a 76-59 advantage with 9:10 remaining. During the run, Gibson converted a three-point play while West and Justin Mitchell each had a 3-pointer for the Pioneers.

Tusculum pushed the lead out to 19 points on a couple of occasions as LMU cleared its bench with four minutes left and TU did the same a minute later as the Pioneers led by as many as 20 (86-66) before settling for the 16-point win. It was Tusculum’s largest margin of victory over the Railsplitters since a 104-79 win on Jan. 27, 1979.

TU forced 19 LMU turnovers on 15 steals, resulting in 30 points for the home team. TU also held a 17-7 advantage in second-chance points and recorded seven blocked shots including three by Brandon Mitchell as he has 157 in his career and is two away from matching the program record held by All-SAC Brad Hawks (159 from 2001-2004). Brandon Mitchell finished the game with six points and nine rebounds as well, giving him 575 for his career, which are tied for the 10th most in program history with former All-SAC standout Jordan Lear (2004-2008).

The Pioneers will be on the road this Saturday when the travel to Coker University for a 4:30 p.m. contest. TU defeated the Cobras 58-50 in Greeneville last month.