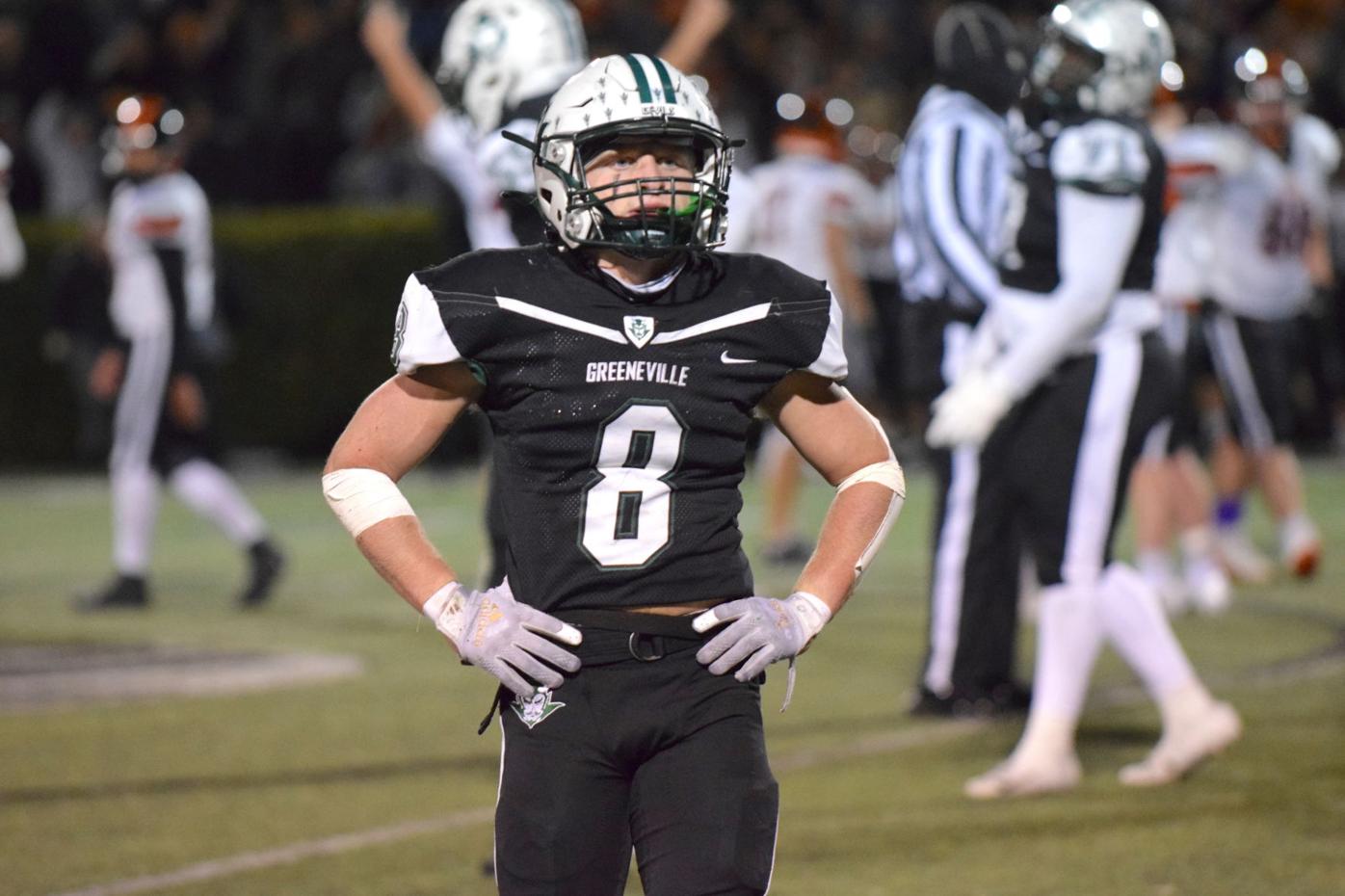 Greeneville’s Jackson Tillery (8) looks on as he leaves the field for the final time following Greeneville’s playoff loss to Elizabethton on Friday. 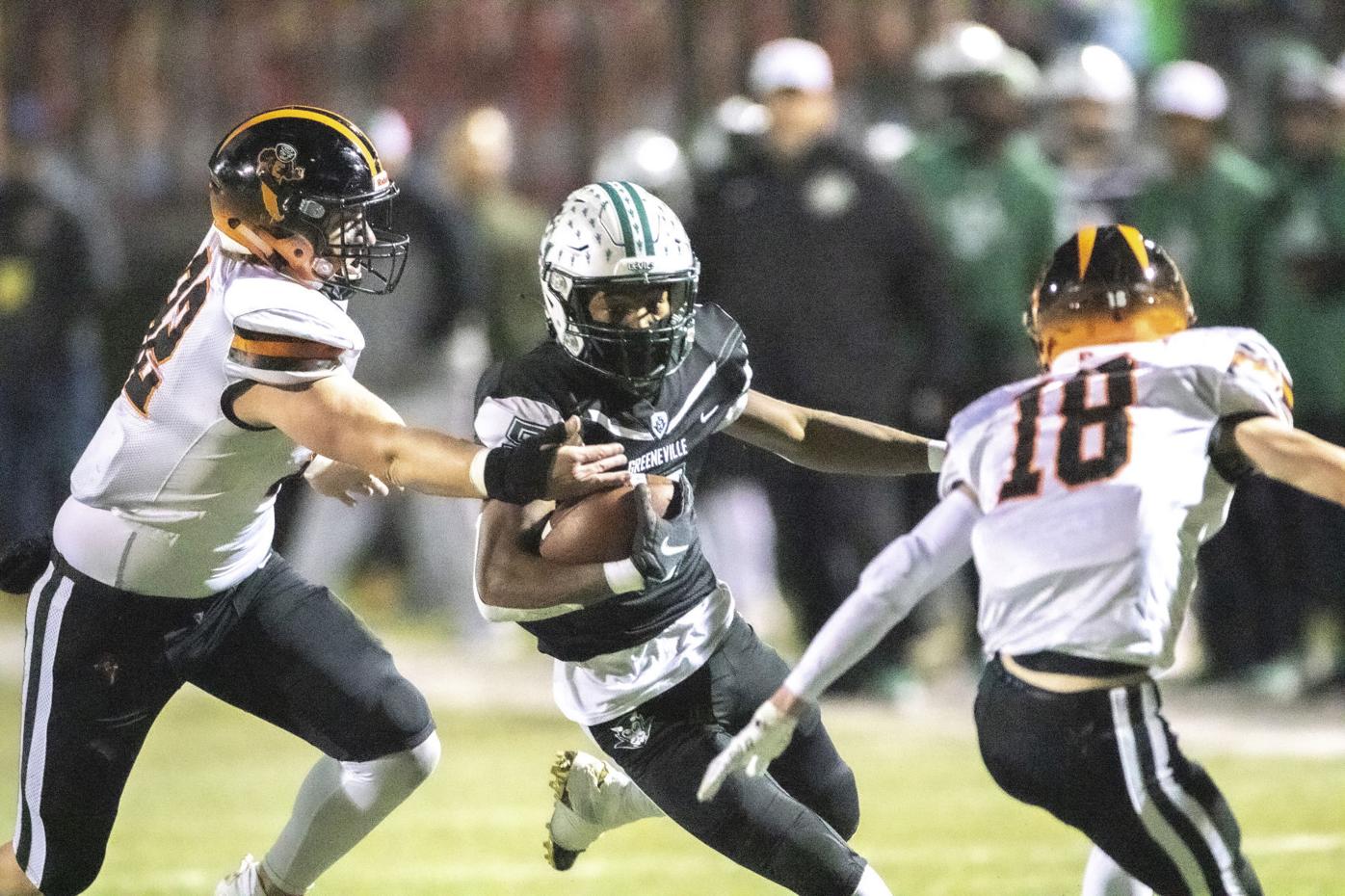 Greeneville’s Adjatay Dabbs (5) takes off for a 31-yard touchdown after catching a pass from Brady Quillen. 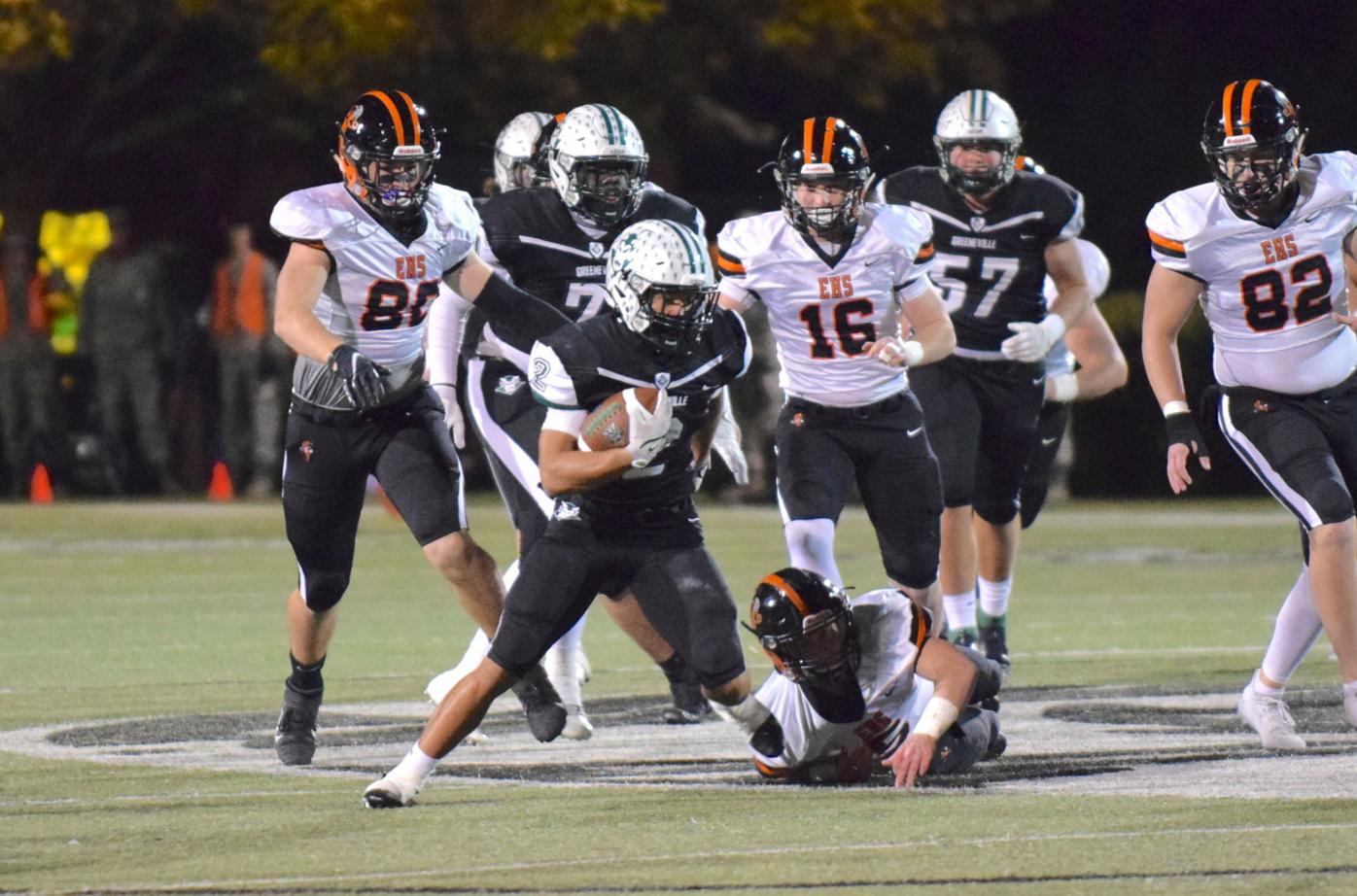 Greeneville’s Jackson Tillery (8) looks on as he leaves the field for the final time following Greeneville’s playoff loss to Elizabethton on Friday.

Greeneville’s Adjatay Dabbs (5) takes off for a 31-yard touchdown after catching a pass from Brady Quillen.

Greeneville football coach Eddie Spradlen summed it up best when he addressed his football team on the field after the game: “This one will hurt for a long time.”

The state’s top-ranked Class 4A Greeneville Greene Devils saw their season unbeaten streak come to an end, and also saw their dreams of a state championship dashed at the same point of the postseason as last year: at the hands of the Elizabethton Cyclones.

Elizabethton, which lost to the Devils 42-12 in their regular season meeting in September, came into a jam-packed Burley Stadium with vengeance on their minds, and they got it.

The Cyclones used a rock solid defense to limit the potent Greeneville offense to only 89 rushing yards and 220 net yards in the game, while turning their offense over to senior quarterback Bryson Rollins, who was a man among boys.

Rollins rushed for 200 yards on a whopping 38 carries, and he made just enough passes to keep the Devil defense honest in guiding the Cyclones to next week’s state semifinal game against Upperman.

“We just couldn’t finish on offense,” Coach Spradlen said. “We had some opportunities. We had a touchdown called back (due to a penalty) there early and that hurt. We just could not get our defense off the field.”

Elizabethton won time of possession, keeping the ball 29:28 while Greeneville had the ball 18:32.

That was because of Rollins, who kept carrying the ball, with everybody wondering how much more fuel he had left in the tank as he took hit after hit from the Devils’ defense. As it turned out, he had more than enough gas to knock off Elizabethton’s old rivals.

“He made big time plays,” Spradlen said of Rollins. “He’s patient back there, looking for gaps to run. We just couldn’t get him off the field.”

With the score tied 7-7 at intermission, the outcome came down to the final quarter, and that’s what Spradlen expected.

“I told the team it would be a four-quarter battle,” he said. “It was.”

And that’s when Rollins seemed to be at his best.

He led the Cyclones on a 64-yard fourth quarter drive in 11 plays, converting three third-down plays during the march. The final third-down play was the clincher. He rifled a pass to standout receiver Jake Roberts, which seemed to be too high to be caught, but Roberts threw up an arm and came down with the ball in his grasp, and he turned upfield on a 21-yard touchdown run. The extra point kick sailed wide left, but the Cyclones were up 13-7 with still plenty of time: 9:40 left.

Greeneville showed some life. Mason Gudger, who was held to only 76 yards rushing on 15 carries, picked up 11. Two plays later quarterback Brady Quillen passed to Jakobi Gillespie, who struggled his way to a first down at the Cyclone 17.

But the Devils couldn’t finish off the drive. Two running plays by Gudger netted only a couple of yards, and a third down pass fell incomplete. On fourth down Quillen found Gillespie on a short out pattern, but he was stopped short of the first down.

With 6:25 left in the game, Greeneville’s offense never saw the ball again. Rollins kept chopping out short runs to pick up four first downs and eat up the clock. Greeneville used its final time out with 1:40 left and the Cyclones facing a third and 3 from the GHS 41. Rollins was stopped on a run, making it fourth down with under a minute left. But a Greeneville lineman jumped offsides prior to the snap on the fourth down play, and Elizabethton’s sidelined erupted as they knew all they had to do was take a knee and deplete the few seconds remaining.

Games of this magnitude often are decided by turnovers and penalties, and early penalties hurt Greeneville. On their first possession of the game, they drove down to the EHS 16 and Quillen passed to Jaden Stevenson-Williams for what looked like a 16-yard TD pass. But the Devils were flagged for offensive pass interference. Two plays later, another major penalty, this one a personal foul, moved them back even farther.

Rollins moved his team down to the GHS 28 before turning it over on downs. Greeneville then began a 72-yard drive in 10 plays for their only score of the night.

With the Cyclones clogging up the middle of the field, Quillen found some success with short passes to Gillespie and Adjatay Dabbs. Dabbs got the touchdown on a 31-yard pass, breaking some tackles and using some fancy footwork on the way to the house. Cooper Graham kicked the PAT for a 7-0 GHS lead with 10:26 left in the half.

Elizabethton responded with bursts of rushing by Rollins, who also got three key complete passes, one of 17 yards to Dalton Mitchell and two to Roberts of 23 and 12 yards. The touchdown came on a 5-yard run by Nate Stephens, who seemed to be stopped near the line of scrimmage but got a big push while surrounded by his linemen to fall into the end zone.

That would be all the first half scoring, and set the stage for the furious second half finish.

“Yeah, this one hurts, because as a team there were high expectations for us,” Coach Spradlen said. “But I’m proud of the year we’ve had. I’ll tell them to remember the good times as a team.”

Elizabethton (12-1) moves on after chalking up 301 yards of offense compared to only 220 by the Devils. Greeneville finishes the year with a 12-1 record. In the past five years, Greeneville has a record of 61-8, with five of those losses coming at the hands of the two-time defending state champ Cyclones. Elizabethton’s five-year record is 60-6, and three of those losses have been to GHS.