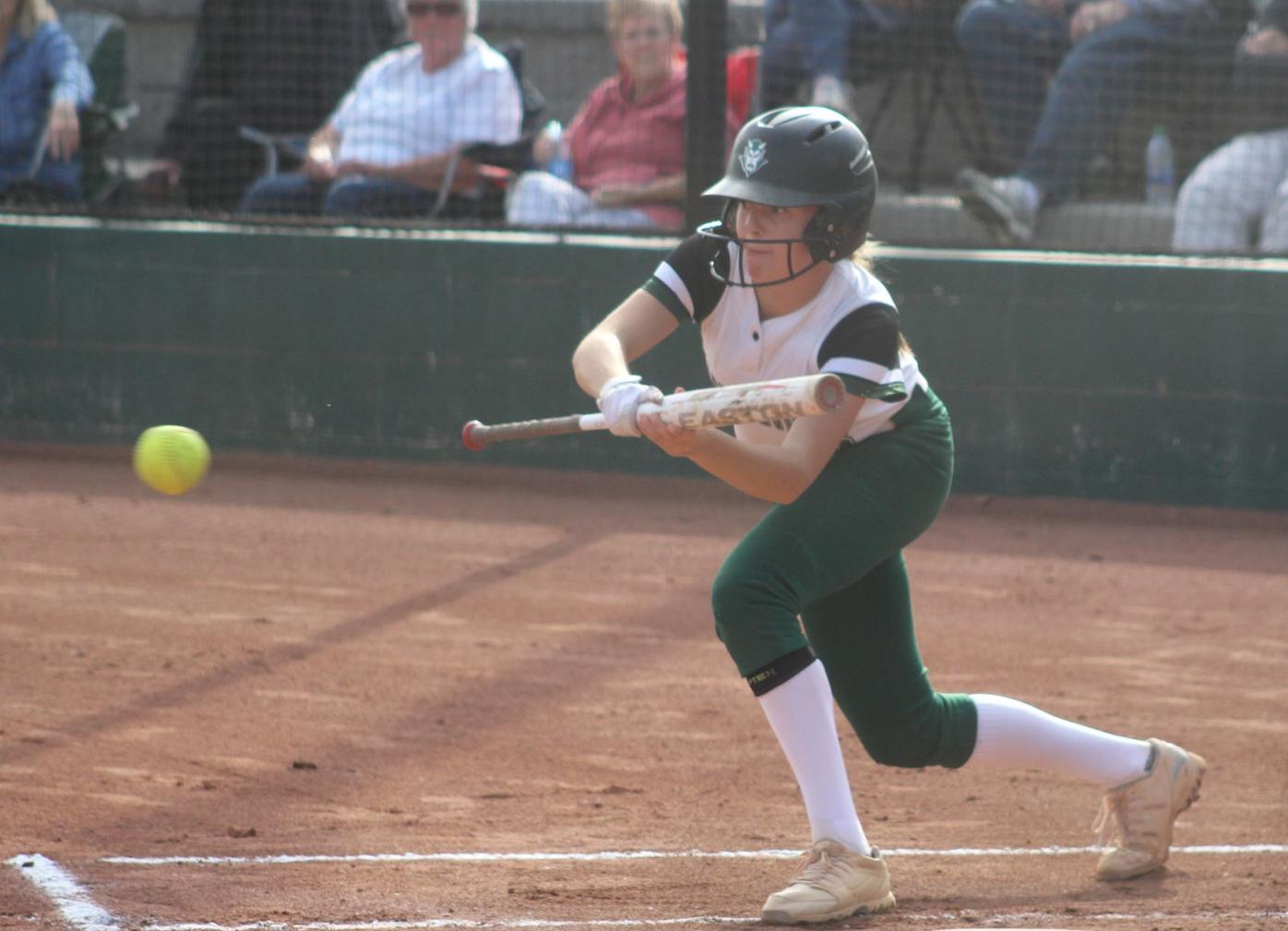 Greeneville’s Ansley Collins tries to bunt during a 1-0 loss to Claiborne in the District 2-2A softball tournament on Tuesday.

Greeneville’s Ansley Collins tries to bunt during a 1-0 loss to Claiborne in the District 2-2A softball tournament on Tuesday.

AFTON — Matthew Palazzo crushed a home run and had two RBI as the Chuckey-Doak Black Knights defeated the South Greene Rebels 11-3 in a first-round game of the District 2-2A baseball tournament on Tuesday.

The game was postponed due to rain on Monday. The No. 3 seed Black Knights will face No. 2 seed Grainger in the second round at 2:30 p.m. Wednesday at Tusculum University, while the Rebels’ season ends.

Connor Lamons pitched the first 3 2/3 innings for Chuckey-Doak. He gave up two hits, a run, walked none and struck out five.

Cole Lamons worked three innings of relief to notch the win. He gave up three hits, two runs, walked one and struck out four.

Claiborne scored the only run of the District 2-2A tournament game on a single by Allie Jones in the first inning.

Claiborne’s Emma Myatt pitched a one-hitter. In seven innings, she walked two and struck out four.

Greeneville’s Kaley Bradley also went the distance in the circle. She gave up three hits, walked seven and struck out seven. Claiborne’s run was earned.

Greeneville will host South Greene in an elimination game at 5:30 p.m. Wednesday.

A few Chuckey-Doak tennis athletes moved on to the Region 1 small class tournament after top performances at the District 1 tournament on Monday.

In boys doubles, Edwin Renfro and Matthew Buch took the district title by defeating fellow Black Knights Evan Murvin and Eli Beddingfield 6-2, 6-3. Both duos will advance to the region.

The Region 1 small class tournament will be held on Monday at the Greene County Tennis Center.

MOSHEIM — The Chuckey-Doak soccer team advanced to the District 1-A championship game.

The Black Knights’ Ethan Grindstaff scored the first goal of the night in the 32nd minute on an assist from Angelo Sobrero.

West Greene’s Brock Shelton tied the match 1-1 in the second half before Grindstaff converted a penalty kick with three minutes left for the win.

Chuckey-Doak will play University High for the district title at 7 p.m. Thursday at Civitan Park in Johnson City.

The Black Knights also earn a spot in the Region 1-A tournament with the win, while West Greene’s season comes to an end.

Aiden Creech recorded the clean sheet in goal. Greeneville’s defense of Jacob Hillyer, Cooper Shepard, Drew Hillyer and Connor Stayton didn’t allow a shot in what was the final meeting between the Greene Devils and Sullivan South, which is being consolidated next year.

The Greene Devils will host Elizabethton in the District 1-2A championship match at 6 p.m. Thursday at Burley Stadium.