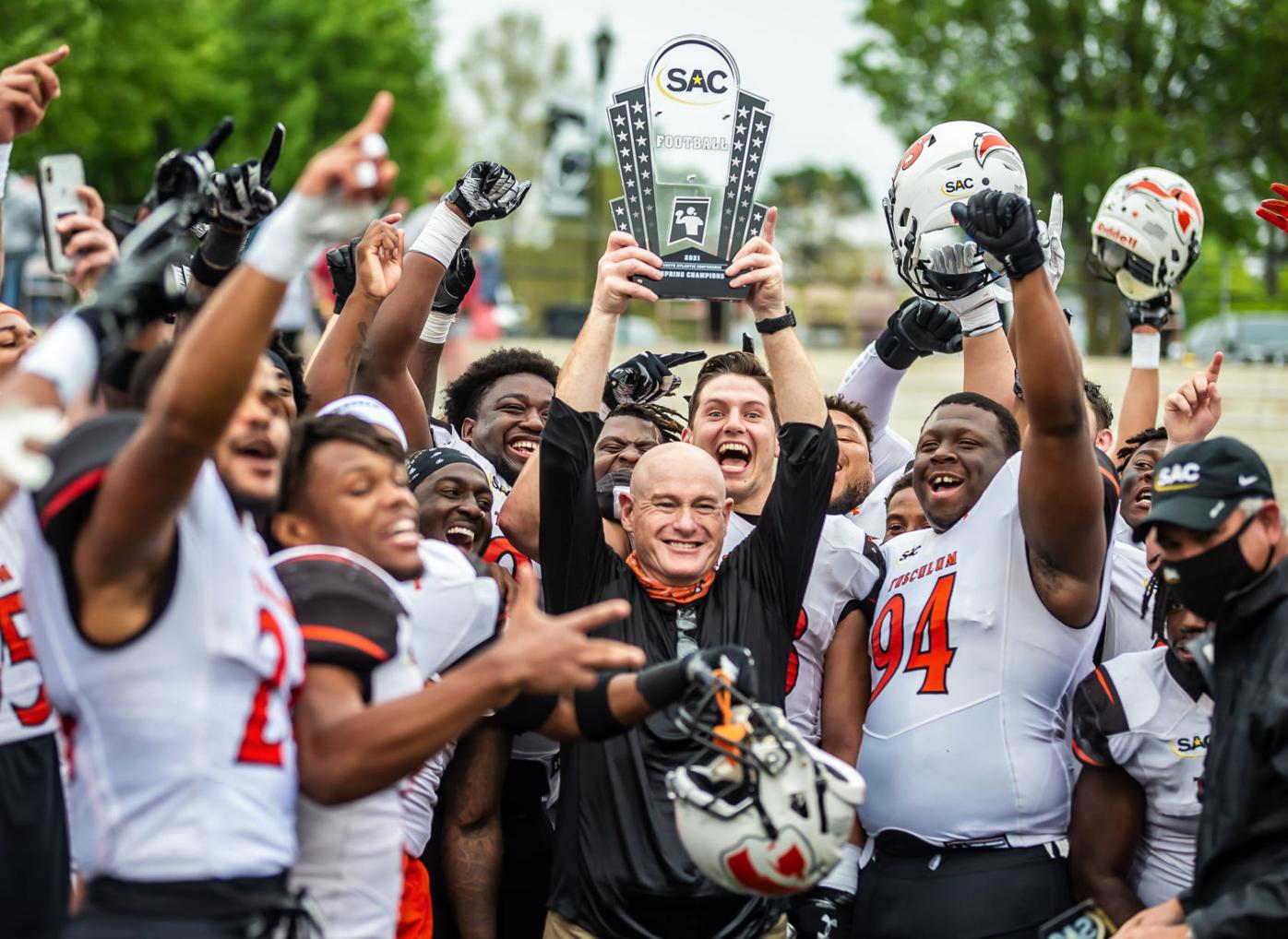 Tusculum University coach Jerry Odom holds up the South Atlantic Conference football championship trophy as the Pioneers celebrate a 28-23 win over the Lenoir-Rhyne Bears in the title game on Saturday in Hickory, N.C. 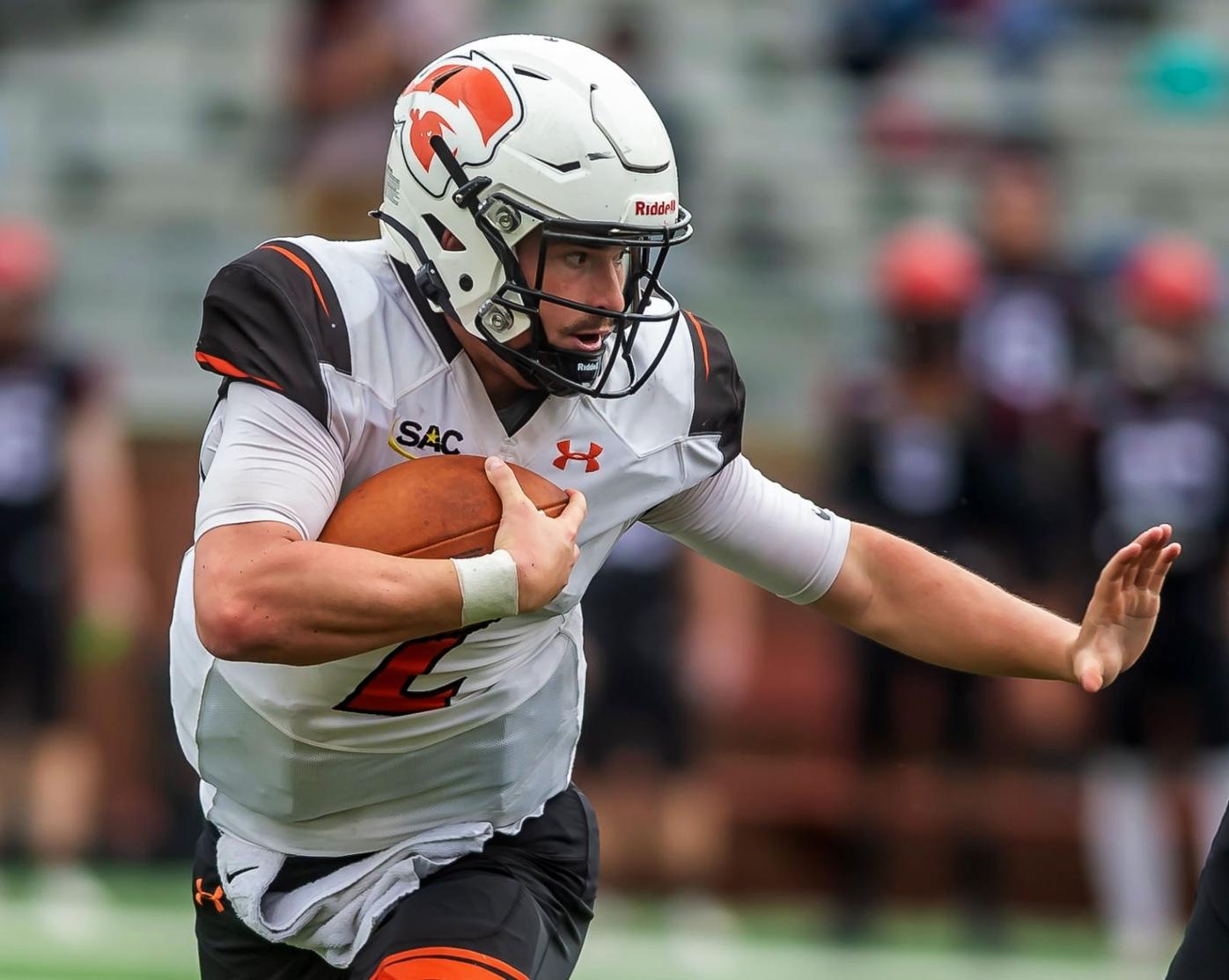 Tusculum quarterback Rogan Wells runs with the football during a 28-23 win over the Lenoir-Rhyne Bears in the South Atlantic Conference football championship game on Saturday in Hickory, N.C. 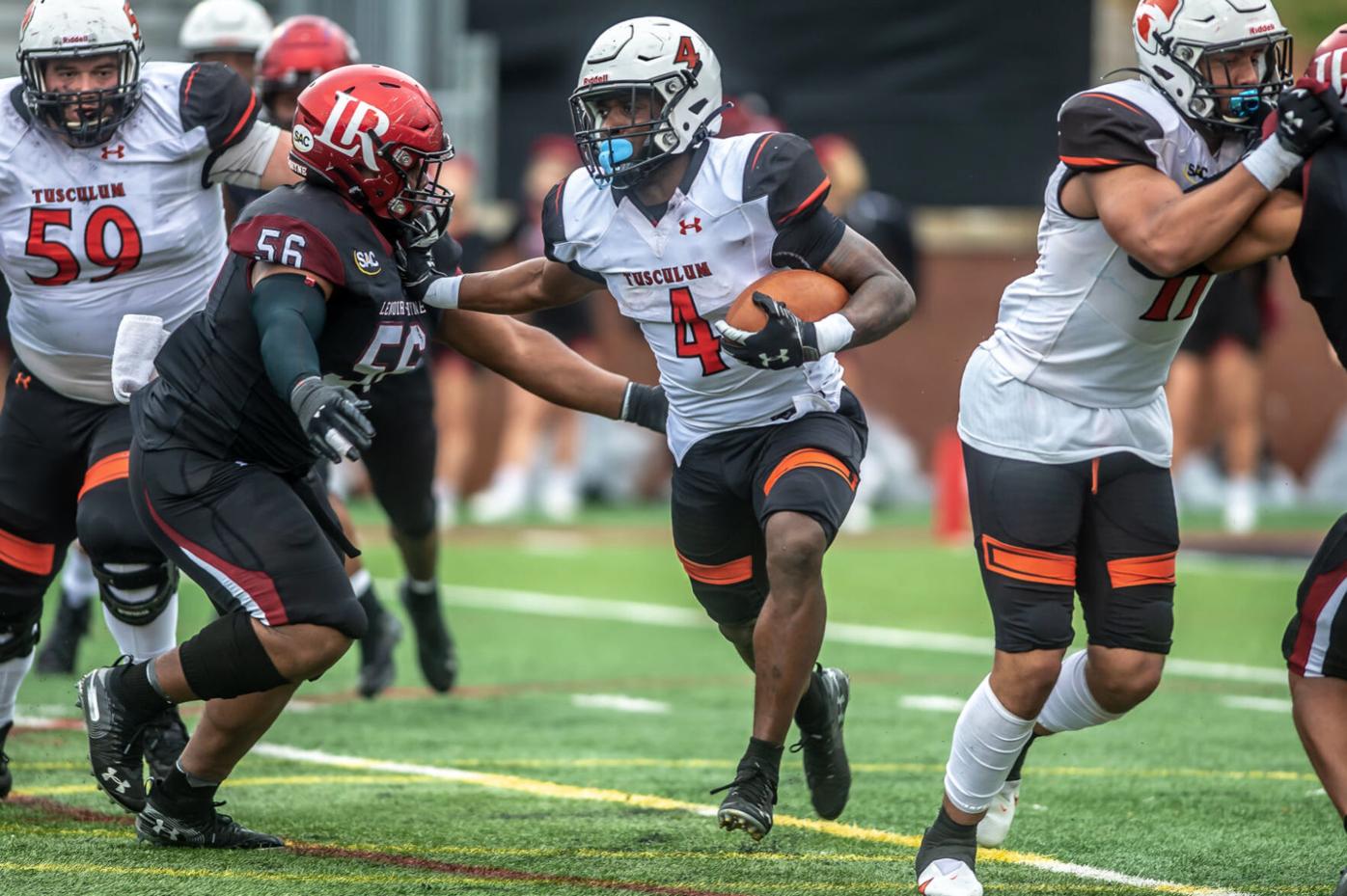 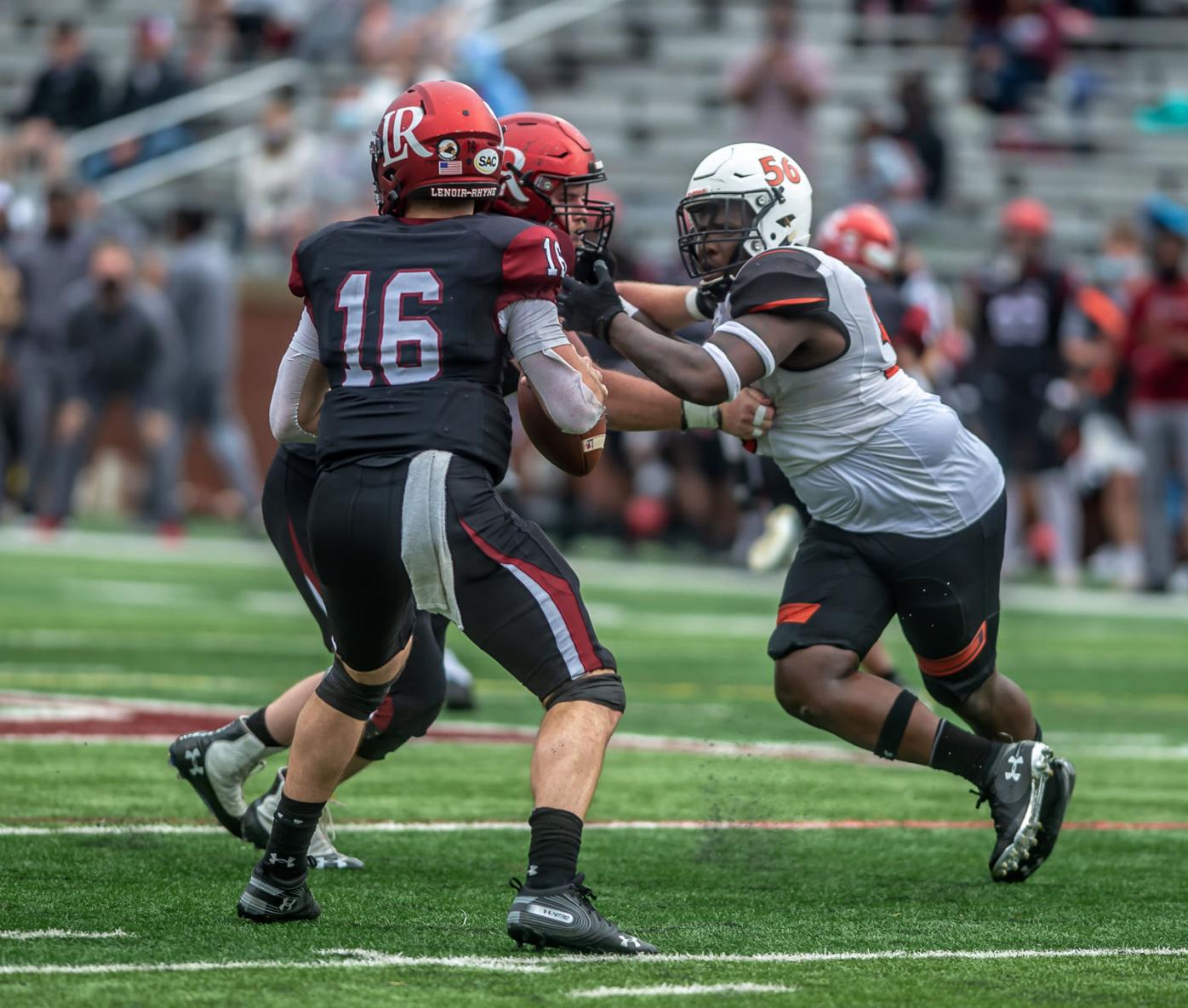 Tusculum University coach Jerry Odom holds up the South Atlantic Conference football championship trophy as the Pioneers celebrate a 28-23 win over the Lenoir-Rhyne Bears in the title game on Saturday in Hickory, N.C.

Tusculum quarterback Rogan Wells runs with the football during a 28-23 win over the Lenoir-Rhyne Bears in the South Atlantic Conference football championship game on Saturday in Hickory, N.C.

Rogan Wells threw for 438 yards and three touchdowns, including two to Derrick Wright, and the Tusculum defense stopped Lenoir-Rhyne on fourth down in Pioneer territory in the final minute to secure the win. Wells, who surpassed the 400-yard mark through the air for the fourth straight game, was 31-for-49 passing as the Pioneers (4-1) rolled up 545 yards of total offense to deny the Bears a third straight conference championship and win the third SAC title in program history, joining the 2003 and 2008 squads.

Grayson Willingham completed 22-for-40 passing for 353 yards and three touchdowns for the Bears (3-1), but was picked off by the Pioneers’ Jermaine Witherspoon at the Tusculum 2 midway through the fourth quarter. The Pioneers drove 79 yards in 11 plays and chewed up 6:01 off the clock, but Wells was picked off by Percy King with two minutes left deep in Bears territory to give Lenoir-Rhyne a final chance from their 44.

The Bears drove to the Tusculum 31 on a 24-yard completion from Willingham to Dareke Young, but the Pioneer defense forced four straight incompletions with Ivan Hogans defending on passes to Ryan Carter on third down and to Jordan Payne on fourth down. Tusculum was able to bleed off the final minute with three runs and celebrated their first win over Lenoir-Rhyne since 2011, their first win at Moretz Stadium since 2008, and the end of the Bears’ 20-game winning streak against SAC opponents. Tusculum had lost eight straight to Lenoir-Rhyne by an average of 24.1 points per game.

Tory Ponder matched his career high with seven catches for 123 yards for the Pioneers, and Justice Parham added six receptions for 114 yards, including a 78-yard touchdown pass from Wells early in the third quarter which gave Tusculum a 28-14 lead. Ajay Belanger had five receptions for 67 yards and Wright had five grabs for 65 yards, with touchdown catches of nine yards in the final minute of the first quarter and 30 yards with six seconds left in the first half to give Tusculum a 21-14 halftime advantage.

Young led all players with nine catches for 166 yards, which included an 11-yard touchdown grab from Willingham on the first play of the fourth quarter to bring the Bears within 28-23. Willingham also hooked up with Dwayne McGee for 19 yards early in the second quarter and hit Hakeem Meggett on a 53-yard touchdown pass four minutes later to give Lenoir-Rhyne its only lead of the game at 14-7 with 10:24 left in the second quarter.

Tusculum’s defense kept McGee in check on the ground, as the Bears’ running back was limited to 65 yards on 25 carries after averaging 148.7 yards per game in Lenoir-Rhyne’s three previous games this spring. As a team, Lenoir-Rhyne ran for just 59 yards on 29 attempts with a long gain of 14 yards.

TJ Jones led the Pioneer ground game with 13 carries for 63 yards, while Maurice Gomillion carried eight times for 31 yards and scored on a 4-yard run with 6:44 left in the first half to tie the game at 14-14. Overall, the Pioneers carried the ball 27 times for 107 yards against the Bears’ defense.

Tusculum was flagged for 10 penalties for 86 yards, including two on what would have been third-down stops during Lenoir-Rhyne’s third-quarter touchdown drive. Lenoir-Rhyne was whistled four times for 45 yards and went 5-for-13 on third down conversions while Tusculum was 4-for-14.

The Pioneers picked up a pair of first downs on their opening drive, but a penalty and a sack drove them out of field goal range and forced a punt. Meanwhile, the Tusculum defense stuffed Lenoir-Rhyne on its first three drives, keeping the Bears from crossing midfield until the final play of the quarter.

Tusculum opened the scoring on its final drive of the first quarter, set up by a 49-yard pass and run from Wells to Ponder down to the LR 23. Two first-down runs by Gomillion put the Pioneers on the Bears’ 9, and Wells hooked up with Wright for the touchdown and a 7-0 lead with 40 seconds left in the quarter to cap a 5-play, 72-yard drive.

Following a Tusculum punt, the Bears moved to their own 47, where on third down Willingham found Meggett for 53 yards and a touchdown and a 14-7 LR lead with 10:24 left in the half. Undaunted, the Pioneers rolled 81 yards in nine plays, including a 19-yard pass from Wells to Ponder on fourth-and 3, and tied the game on a four-yard run by Gomillion with 6:44 left until halftime.

Another stop by the Pioneer defense gave the offense the ball at the 20 with 2:42 left in the half. Wells would go 7-for-7 on the ensuing eight-play drive, hitting Raphael Williams for 19 yards, Parham for 11 and Ponder for 15 to give Tusculum the ball at the Lenoir-Rhyne 30 with 14 seconds left. Wells then found Wright down the left side for the touchdown and a 21-14 lead with six seconds to play. The Bears nearly pulled off a miracle on the ensuing kickoff, but Ryan Carter was dragged down inside the Tusculum 10 with no time remaining after an 86-yard return.

Tusculum forced a three-and-out to start the third quarter, and took over at its own 9. After a 13-yard run by Jones, the Pioneers faced third-and-10 at its 22 but Wells found Parham deep for a 78-yard touchdown and a 28-14 lead with 13:03 left in the third. Lenoir-Rhyne wasted little time in responding, as a kickoff return to its 45 and a 37-yard pass from Willingham to Young put the Bears at the Tusculum 15. Four plays later, Chase Allbaugh booted a 32-yard field goal to cut the Pioneer lead to 28-17 with 11:20 left in the third.

The Pioneers’ next drive got to the Lenoir-Rhyne 39, but Wells was intercepted by Eric Jackson who returned the ball to the Tusculum 39. However, the Bears went nowhere on offense and were forced to punt. The Bears’ next drive started at their 21 after a punt, and seemed to bog down after a Logan Cowart sack left LR with third-and-16. However, a late flag for pass interference gave the Bears a first down at the 40, and another pass interference call on third-and-5 pushed the Bears to the Tusculum 25. On third-and-9 from the 11, Willingham hit Young on a crossing route for the touchdown, but the two-point conversion failed and the Pioneers lead 28-23 with 14:54 remaining in the fourth.

Tusculum was stopped on its next drive, but a career-long 60-yard punt from Andrew Cantrell flipped the field and gave Lenoir-Rhyne possession at its own 6. Another exchange of punts left the Bears with the ball at their own 47, and a 36-yard pass to Young left LR at the Tusculum 19. Two plays later, Witherspoon stepped in front of a Willingham pass and snagged his second interception of the year to give Tusculum the ball back with 7:51 to go.

The Pioneers seemed destined to run out the clock, using a 13-yard scramble by Wells, a 17-yard pass to Williams and a 12-yard completion to Belanger to move to the Bears’ 35. A pass interference call on the Bears moved the ball to the LR 14 with just over two minutes left, and the Bears began burning timeouts in a last-ditch effort to get the ball back. LR did get the ball back unexpectedly as Wells attempted a pass over the middle that was snagged by King at his own 5, and he returned the ball all the way to his 44 before being pushed out of bounds by Wells with 1:50 to go.

With 56 yards to the end zone, Willingham hit a short pass to Deondre Lester for one yard and then found Young in front of the coverage for 24 yards to the Tusculum 31. The Pioneer defense then rose to the moment, as Cowart forced a throwaway on first down and Montreal Henry broke up a pass intended for Kelin Parsons on second down. Hogans then stepped to the front, disrupting a throw to Carter on third down and blanketing Payne on fourth down as the Bears turned the ball over with 55 seconds left. Two carries by Gomillion were followed by the Bears’ final two timeouts, and Wells was able to extend the play just long enough on third down to allow the game clock to expire before fourth down.

Cantrell punted six times in windy and rainy conditions and averaged 41.4 yards per punt for the Pioneers, while Michael Owen had six punts for a 44.3 yard average and three inside the 20 for the Bears.

Tusculum had the advantage in time of possession over Lenoir-Rhyne, controlling the ball for 31:34 to 28:26 for the Bears. Lenoir-Rhyne had 263 return yards in the game, with 171 on kickoffs, 68 on interceptions and 24 on punts.