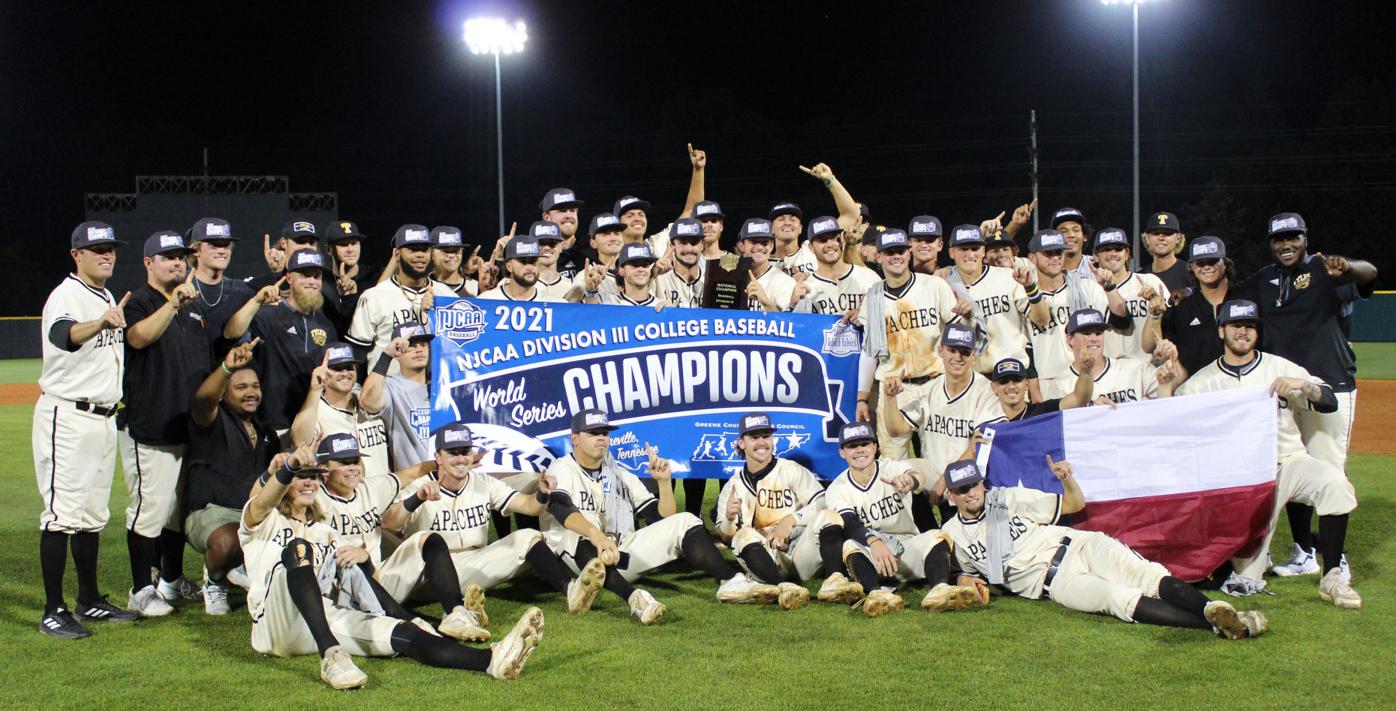 The Tyler Junior College Apaches pose for a team photo following their 5-4 win over Niagara in the JUCO D-III World Series championship game on Wednesday night at Pioneer Park. 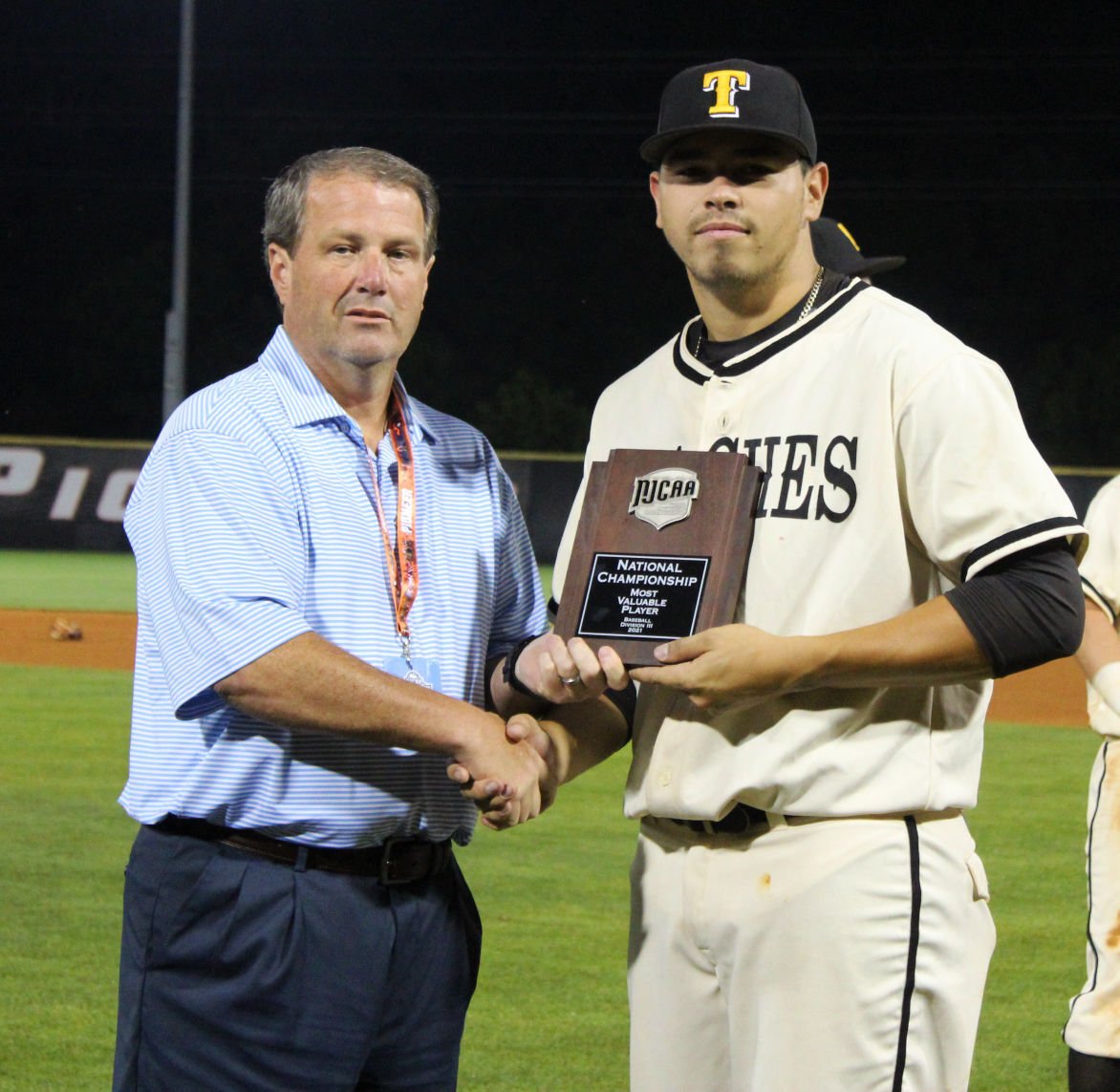 Tyler Junior College’s Miguel Vega (right) was named Most Valuable Player of the JUCO D-III World Series on Wednesday night at Pioneer Park. Vega slugged five home runs in the series, including a go-ahead, two-run blast in the eighth inning of a 5-4 win over Niagara in the championship game.

The Tyler Junior College Apaches pose for a team photo following their 5-4 win over Niagara in the JUCO D-III World Series championship game on Wednesday night at Pioneer Park.

Tyler Junior College’s Miguel Vega (right) was named Most Valuable Player of the JUCO D-III World Series on Wednesday night at Pioneer Park. Vega slugged five home runs in the series, including a go-ahead, two-run blast in the eighth inning of a 5-4 win over Niagara in the championship game.

Trailing 4-3 in the bottom of the eighth inning, Tyler’s Miguel Vega slugged a line drive two-run homer over the left-center field fence to propel the Apaches to the school’s sixth national championship, and first since 2017, which also came in Greeneville against the same opponent. Vega, who hit five home runs in the World Series, was named the most valuable player of the series.

It was a game worthy of a championship, complete with superb pitching by both sides and clutch hitting with the game on the line.

Niagara, which had to battle out of the loser’s bracket to get to the finals, including winning a doubleheader on Tuesday, figured to be short on pitching, but it certainly didn’t look like it as Troy Leibert, who came on to pitch in the third, kept the potent Tyler bats at bay until Vega’s bomb in the eighth.

On the winning side, Zach Williams started and went 6 2/3 innings for Tyler before Adam Davis came on to get the win, pitching 2 1/3 innings and allowing only one hit.

With the game knotted at 3-3, Niagara got the upper hand in the top of the seventh with some key hitting. Matt Ferris singled with one out and went to second on a passed ball. With two out, Chris Tani came up with an RBI single which dribbled over the second base bag into the outfield, allowing Ferris to score the go-ahead run.

Tyler threatened in the bottom of the seventh with back-to-back walks and one out, but a double play turned by the Thunderwolves got them out of that jam.

Davis of Tyler retired Niagara in order in the top of the eighth, setting the stage for the fireworks in the home half of the inning. Heath Hood reached on a two-base error with one out, and Dalton Davis hit a towering fly to the deepest part of the ball park which was caught but allowed Hood to tag and reach third.

Vega then came through with his homer off Leibert that boosted Tyler into the 5-4 lead.

Niagara refused to go down quietly. Davis retired the first two batters without incident in the ninth, but then Scottie O’Bryan had Tyler fans gulping hard when he sent a fly ball to center that burned the center fielder and rolled to the fence. O’Bryan wound up at second with a double. But Davis buckled down and got Tani on a strikeout to end the game and resulted in the traditional “pig pile” at the pitcher’s mound as Tyler had earned a national crown.

A large and boisterous crowd was on hand, most of them from Texas or New York, and they were treated to a classic. Niagara scored three times in the opening frame, as O’Bryan and Andrew Fairbrother both walked with one out. Cal Brazier, Cole Laskowski and Zach Evans each followed with singles and each hit resulted in an RBI as the Wolves took a quick 3-0 lead.

It didn’t take the power hitting Apaches long to get two of the runs back in the bottom of the first. Hood smacked a double with one out and Dalton Davis followed with a two-run homer to left to close the gap to 3-2.

Tyler tied the game at 3-3 with a solo run in the second and they did it without the benefit of a base hit. Jacob Johnson and Hood each walked with one out. Hood was retired on a force play with a ball hit to short by Davis, but a throwing error trying to turn the double play allowed Johnson to hustle home with the tying score.

Pitching was then key through the middle innings as Willliams of Tyler and Leibert of Niagara were in control. Tyler had opportunities, twice leaving the bases loaded and they left 12 runners stranded on the base paths in the game.