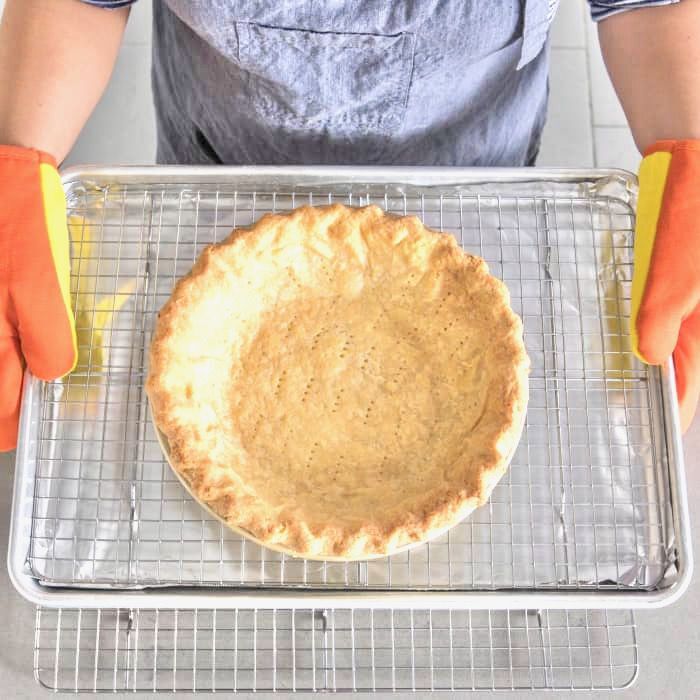 All great pies begin with a great pie crust. Our all-butter version comes together in the food processor, is a cinch to roll out and shape, and bakes up crisp and flaky. 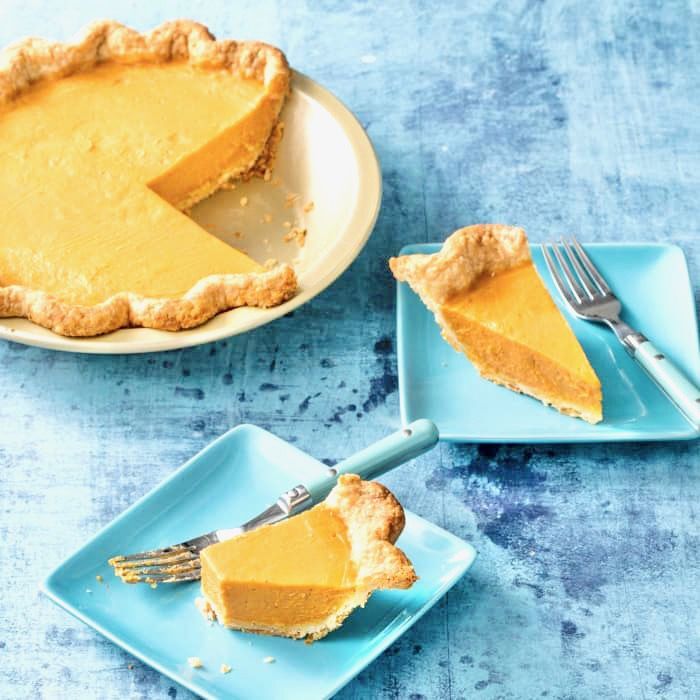 This Thanksgiving staple is “easy as pie” for kids to make! Our version uses a secret ingredient to make the filling smooth and sliceable without baking it. 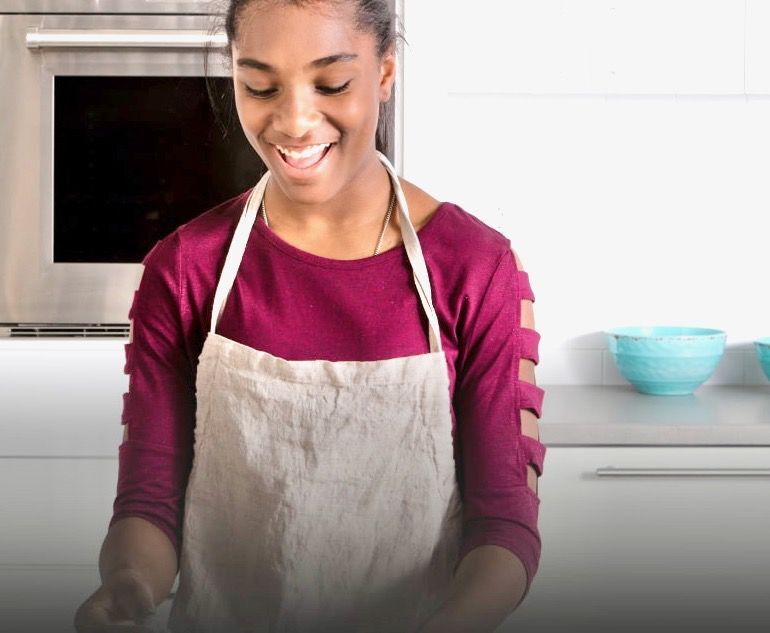 This week, kids can practice recipes that they can contribute to the Thanksgiving table or any family meal.

All great pies begin with a great pie crust. Our all-butter version comes together in the food processor, is a cinch to roll out and shape, and bakes up crisp and flaky.

This Thanksgiving staple is “easy as pie” for kids to make! Our version uses a secret ingredient to make the filling smooth and sliceable without baking it.

This week, kids can practice recipes that they can contribute to the Thanksgiving table or any family meal.

Welcome to Kitchen Classroom, where America’s Test Kitchen Kids is sharing a weekly set of kid-tested and kid-approved recipes, hands-on experiments, and activities paired with suggestions for how to bring learning to life in the kitchen.

This week, kids can practice recipes that they can contribute to the Thanksgiving table or any family meal: Pumpkin Pie made with kid-friendly homemade Pie Dough.

All great pies — including our Pumpkin Pie, below — begin with a great pie crust. Our all-butter version comes together in the food processor, is a cinch to roll out and shape, and bakes up crisp and flaky. You can make this dough up to 2 days ahead, making it perfect for Thanksgiving prep. When kids are ready to shape and blind bake their pies, they can follow the steps and tips in our How to Use Pie Dough guide. As kids shape their pie shell, be sure to have them save their pie dough scraps to use in the learning moment, below.

Remove lid and pour ice water over mixture. Lock lid back into place. Turn on processor and process until little balls of butter form and almost no dry flour remains, about 10 seconds. Stop processor.

Remove lid and carefully remove processor blade (ask an adult for help), and form and shape dough into 6-inch disk.

Refrigerate disk of dough for at least 2 hours or up to 2 days before using, unless making Pumpkin Pie. (If making Pumpkin Pie, immediately roll out dough, fit into pie plate, and blind-bake, following the instructions at www.americastestkitchen.com/kids/recipes/how-to-use-pie-dough.

Many pie dough recipes, including this one, call for using chilled butter and ice water. Ask kids: Why do you think we need to use these cold ingredients when we’re making pie dough? What happens to butter as it warms up?

After shaping their pie shell, have kids squish the pie dough scraps (which are warmer because they’ve been at room temperature for a while) into a ball. Then, they should press the ball into a disk, and use a rolling pin to try and roll out the room-temperature dough. Ask kids to observe what the pie dough looks like and then take a peek at the rolled-out pie dough that’s chilling in the fridge. What do they notice? Do the two doughs look different? How did this dough feel to roll out versus the first time with the colder dough? Is the warmer dough greasy at all?

Explain to kids that using chilled butter and ice water (around 35 degrees) in pie dough helps make sure the dough is filled with small pieces of butter. When the dough bakes in the hot oven, the water in those bits of butter turns to steam and escapes the dough, leaving behind teeny tiny air pockets. Those little air pockets are what give our pie dough its flaky texture.

If the dough—and the butter—are too warm when you are rolling it out, the butter softens and spreads. You won’t get those little pockets of butter, which means your pie crust won’t be flaky.

Here’s a fun guessing game that the whole family can play this Thanksgiving: Two Truths and a Pie! In each of the questions below, your job is to figure out which of the pies isn’t real. Maybe you’ll be inspired to try a new pie, just like the main character, Peyton, in our new picture book Peyton Picks the Perfect Pie.

Answer Key: Pineapple upside-down pie is NOT a real pie (though you can enjoy pineapple upside-down cake). Sweet potato pie is similar to pumpkin pie, and chess pie is a name for a single-crust custard pie that was brought to the United States by English settlers in the 1600s.

Snozzberry pie is NOT a real pie (imaginary snozzberries were featured in Roald Dahl’s Charlie and the Chocolate Factory). Banoffee pie is filled with bananas and caramel and topped with whipped cream. Key lime pie is traditionally made with small, fragrant Florida Key limes.

Whoopie pie is NOT a real pie (whoopie pies are a different dessert, made of two cakey cookies and a cream filling). Shoofly pie, part of Pennsylvania Dutch cuisine, features a molasses filling and a crumble top. Mince pies, also called “mincemeat” pies, are filled with a sweet mixture of dried fruit and nuts and are popular in England, especially around the holidays.

Boston cream pie is NOT a pie—it’s a layer cake filled with cream and topped with chocolate. Marionberries are real berries! They are a variety of blackberries cultivated in Oregon and they make a delicious sweet-tart pie filling. And there’s no dirt in a Mississippi mud pie, just layers of chocolate!

Ear pies might sound good, but they’re NOT a real type of pie. Hand pies are small pockets of dough or pastry surrounding a sweet or savory filling. They’re perfect for eating on-the-go. Pot pies have a savory filling (often chicken) and usually only have a crust on the top.

This Thanksgiving staple is “easy as pie” for kids to make! Our version uses a secret ingredient to make the filling smooth and sliceable without baking it. This recipe can be made with our recipe for homemade Pie Dough, or with store-bought dough. The pie shell needs to be shaped, blind-baked, and cooled before filling. If you’d like to make this pie ahead for Thanksgiving, it can be refrigerated for up to 2 days or wrapped in plastic wrap and foil after chilling and frozen for up to 2 weeks. If frozen, unwrap pie and thaw at room temperature for 5 hours before serving.

In medium microwave-safe bowl, whisk cream and gelatin until all gelatin looks wet (mixture will be slightly lumpy). Let mixture sit for 5 minutes.

Heat gelatin mixture in microwave for 1 minute. Use oven mitts to remove bowl from microwave and whisk until smooth and syrupy. Set aside.

Use oven mitts to remove bowl from microwave. Add gelatin mixture to pumpkin mixture and carefully whisk until well combined (ask an adult for help—bowl will be HOT).

Lightly spray sheet of plastic wrap with vegetable oil spray. Gently press greased plastic onto filling. Refrigerate pie for at least 4 hours or up to 2 days. Slice pie into wedges and serve.

As you prepare the ingredients for this recipe, ask kids: Have you used gelatin in other recipes before? (Hint: Have they ever made Jell-o? That’s made with gelatin!) What do kids think the gelatin will do in this pumpkin pie filling? Before mixing it with the cream in step 1, have kids observe the gelatin powder. What does it look like and feel like? Ask kids to make a prediction: How do they think the gelatin might change after being mixed with the cream in step 1 and microwaved in step 2?

As the filling cools in step 5, discuss what kids observed. How did the gelatin change when it was added to the cream and heated? Explain to kids that many pumpkin pie recipes bake the filling to get it to thicken and set, but not this one! It thickens thanks to the power of gelatin. Gelatin is a kind of protein. It’s made up of long, thin molecules. When gelatin is mixed with a hot liquid, its molecules are loose and flexible and they move around a lot—the liquid stays liquid. But when the temperature gets colder, the gelatin molecules slow down and start to get tangled, kind of like headphones or earbuds when they’re in your pocket. Eventually, they get so tangled that they trap the liquid inside. The liquid can’t move around or flow: It becomes a solid. That’s why the pie is chilled in the fridge in step 6; as the temperature of the pie filling drops, the filling becomes more and more solid, until it’s easy to slice into neat wedges for serving.

To see how temperature affects gelatin, kids can do a simple science experiment while the pie chills:

Add 1 teaspoon gelatin to each of two small bowls.

Place bowls in refrigerator and chill for 20 minutes.

Observe the mixtures again: How have they changed? Do they look the same or different?

When we conducted this experiment in the Recipe Lab, we saw that the mixture made with hot water turned clear and became solid after chilling, and the mixture made with ice water was opaque and remained soft and liquidy after chilling. When the gelatin was mixed with hot water, it dissolved completely and then slowly turned from a liquid to a solid in the refrigerator. The gelatin couldn’t dissolve in the ice water, so it did not turn clear, and it couldn’t form that tangle of proteins that trapped the liquid inside when its temperature dropped below 50 degrees. So, to get gelatin to gel, heat it up before chilling it down.