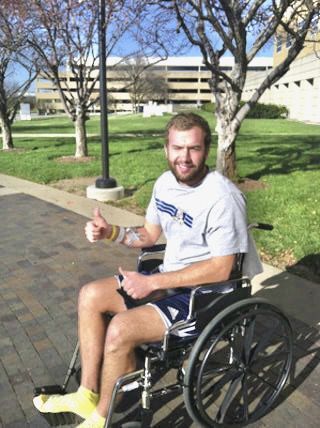 Joel Haler gives a thumbs after finding himself paralyzed and confined to a wheelchair. 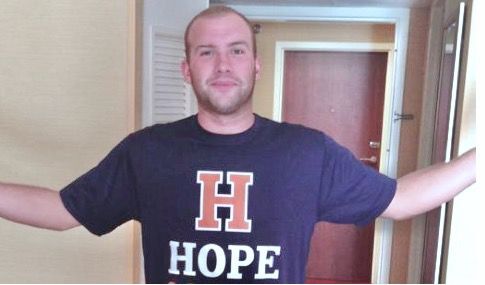 Joel Haler said his faith grew as he read his Bible and sought a miracle to cure his paralysis. Haler has appeared on a variety of television shows to talk about his healing.

Joel Haler gives a thumbs after finding himself paralyzed and confined to a wheelchair.

Joel Haler said his faith grew as he read his Bible and sought a miracle to cure his paralysis. Haler has appeared on a variety of television shows to talk about his healing.

I don’t know how many people have been witness to real life, medically documented miracles, but I have now been privileged to see two.

The first documented miracle was shared in my very first column for this paper entitled “Tough Tony from Tennessee” where I described the miracle that took place at the hospital. I saw the medical charts of my son where it chronicled the miracle in black and white in the notes the nurse took. I have carried that miracle with me for almost 34 years and have never personally known another medically documented miracle, until now.

Meet Joel Haler. If his name or face look familiar, it might be because you have seen or heard his story on television as most of the morning news shows, Christian broadcast networks and even Inside Edition all did featured stories about his miracle. Now it is my turn.

I met Joel a few months ago and I instantly liked him, a young, energetic guy with a fun sense of humor. With each day that passed, we got to know each other more. I found out he is married with a child on the way and he is working in the mission field. He and his wife are in the process of buying their first home and, thankfully, life is just as good as it can be.

Then one day, he let it slip that he was paralyzed for a short time in his life. To which I replied, “Paralyzed, like wheelchair and not walking?”

He chuckled and said, “Yes, from the belly button down.”

Then he casually mentioned that I could google him if I wanted to see his story. Well, faster than the blink of an eye I was looking online at news footage and his miraculous healing. It was then that I told Joel about this column and how I wanted to write about him.

It turns out, at the tender age of twenty while at the height of his basketball career at Hope College in Michigan, Joel was struck down with a mysterious paralysis while doing a home workout routine. He heard and felt a snap in his back and by morning could not walk.

When his father described that morning on the Inside Edition show he broke down in tears, saying at first he thought Joel just had a pinched nerve. But he quickly realized when he saw his son’s legs dangling lifeless that it was far more serious than that.

Weeks and months of neurological tests, lumbar punctures and robotic walking therapy treatments at the Rehabilitation Institute in Chicago left the doctors without answers as they could not find the source of Joel’s paralysis.

The doctors even suggested that Joel might have suffered from conversion disorder. Conversion disorder is a mental condition in which a person has blindness, paralysis, or other nervous system (neurologic) symptoms that cannot be explained by medical evaluation.

The whole time this was happening Joel says he read more of his Bible for clarity. Feeling his faith grow stronger with each passing day, Joel would dream of running through a ribbon that had J23 written on it. Then one day at his family’s church, he was approached by a 4-year-old boy named Braxton who told Joel that God spoke to him and said that he would walk again on a Thursday.

After telling his family about the boy’s prophecy they looked on a calendar and saw that the vision Joel was having in his dream of J23 could possibly stand for January 23, which ironically would fall on a Thursday. Is it possible that there was a connection? Joel decided that if God was going to heal him on this day, he wanted to be awake for the healing.

Sometime around 3 a.m. he started to have a tingling sensation in his toes and over the course of a few hours pain developed. The pain then traveled up his legs to his hips. Joel describes laying there thinking, “Wow, this is really going to happen,” and thanking God as sensation came back to his body. When the pain subsided, Joel could walk again — a full and total recovery without any atrophy despite being wheelchair bound for several months.

Since his recovery, Joel has dedicated his life to Christ and is doing work in the Mission field.

The doctors have never been able to figure out what caused Joel’s mysterious paralysis or recovery, but, Joel knows exactly who healed him. Just like the song Jerry Lewis made famous on his telethon, always remember with God, “You will never walk alone.” Life is mysterious.

“When you walk through a storm, hold your head up high and don’t be afraid of the dark.

“At the end of a storm, there’s a golden sky and the sweet silver song of a lark.

“Walk on, walk on, with hope in your heart and you’ll never walk alone.

The “Life Is Mysterious” column by Ella Price, caterer, blogger, columnist and writer at lifeismysterious.com, is published in Accent every other Wednesday.