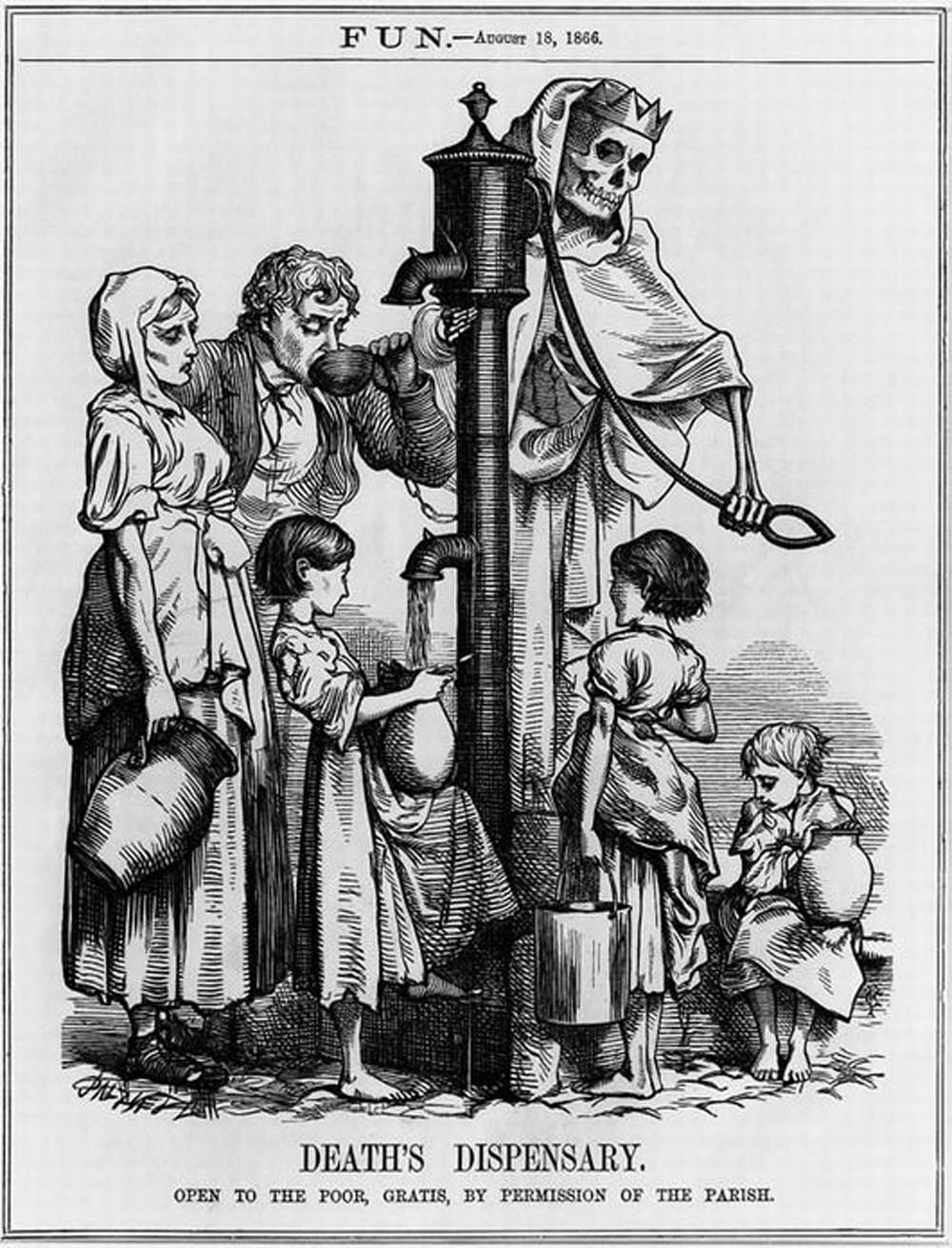 This 19th century illustration from a publication named "Fun" depicts the association being made by the general public between the disease cholera and pumps that provided water for drinking, cooking and washing. In fact, the disease could be carried by water from any source, if fecal contamination was present. 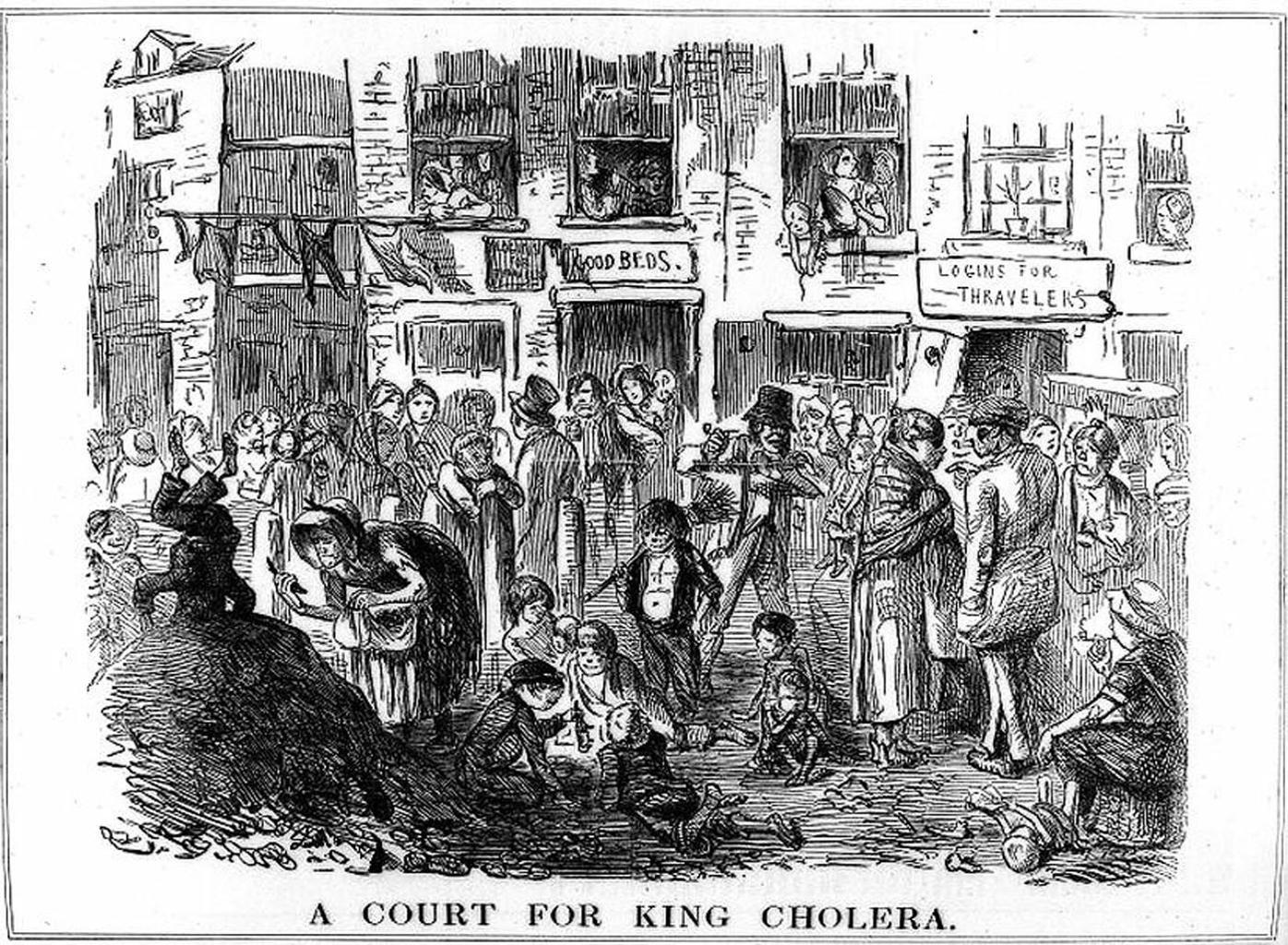 Those who lived in impoverished and squaiid conditions often were blamed for spreading cholera. This old British illustration advances that perception and also makes use of the common metaphorical reference to the disease as “King Cholera.”

This 19th century drawing depicts a dead cholera victim from an epidemic of the disease earlier than the 1873 epidemic that affected Northeast Tennessee.

This 19th century illustration from a publication named "Fun" depicts the association being made by the general public between the disease cholera and pumps that provided water for drinking, cooking and washing. In fact, the disease could be carried by water from any source, if fecal contamination was present.

Those who lived in impoverished and squaiid conditions often were blamed for spreading cholera. This old British illustration advances that perception and also makes use of the common metaphorical reference to the disease as “King Cholera.”

This 19th century drawing depicts a dead cholera victim from an epidemic of the disease earlier than the 1873 epidemic that affected Northeast Tennessee.

A cruel and heartless “king” visited Greene County in 1873. By the time this “king” departed, about 100 individuals from Greeneville and Greene County were dead.

This “king” was a king only in a metaphorical sense created by members of the public, and picked up by alliteration-loving journalists and illustrators of that day. Those molders of the language advanced the image and idea of “King Cholera,” then joined everyone else in hoping and praying the king soon would be dethroned.

The late Richard Harrison Doughty included the 1873 cholera outbreak in his book “Greeneville – One Hundred Year Portrait,” and did a good job, in my opinion, of conveying the grim situation in which our earlier-day community counterparts found themselves.

In 2020 we all feel that unpleasant jolt when we learn that another person (or more) has died from COVID-19 in our community. So imagine how it must have been in mid-1873 when about 100 Greene County locals died of a disease whose victims sometimes began showing symptoms mere hours after infection.

Even worse, cholera could sicken a person one day and kill him or her the next. King Cholera was a fast-killing tyrant who did not care whom he struck down.

Doughty’s history volume gives a specific start date for Greeneville’s bout with the epidemic: May 24, 1873. On that day, Dr. Marion Maloney came to Greeneville from Nashville and became ill in a local hotel. A doctor here, E.B. Smith, examined Maloney and noticed his symptoms matched up with those of “asiatic cholera,” a disease Smith never had encountered before.

Maloney apparently suffered greatly, but was one of the lucky ones. He survived. Like Covid-19, cholera could kill, and did, but not always.

Less than a month after Maloney’s case, another appeared here when a man named Piper grew ill and died only a day later. In subsequent weeks, repeated cases and deaths showed up, enough to prompt a flight from town by many locals who took refuge with friends and family out in the county or other areas.

Doughty relates that Dr. Smith was so motivated by the coming of cholera that he actually moved to a ground-floor room in his home and kept open a window through which he could be summoned when the next case of appeared. And appear they did, one after the other.

Smith, whom Doughty’s book calls the “unsung hero of the cholera epidemic,” cared diligently for his cholera patients, and amazingly avoided contracting the disease himself despite repeated exposure.

In those days before medical privacy rules, everyone knew who got the disease and who died from it. The surnames of the dead include many still common in Greene County and Northeast Tennessee: Pickering, Reaves, Farnsworth, Remine, Wilhoit, Thornburg, Gass, Bowers, Anderson, Broyles, Hankins, Carson, Cannon, Barnett … and more.

King Cholera even paid call on a former president named Andrew Johnson, sickening him but sparing his life.

During the worst of it all, according to Doughty’s volume, “undertakers and grave-diggers were so very busy that it was reported that more than one person shared a grave. The entire upper right hand corner of Old Harmony Graveyard was given over to the cholera victims. The courage of these people and the doctors that ministered to the sick cannot be underestimated.”

Greeneville seemingly was perceived as a hotbed of the disease in that summer of 1873. Two years later,physician W.R. Sevier wrote an account of the disease in Jonesborough for the United States Surgeon-General’s Office.

Sevier wrote: “The first case of cholera (in Jonesborough) occurred June 29, 1873, in the person of a refugee from Greeneville. This case was violent in its character, but the patient recovered. The next case was on the 4th of July, and was also in a refugee from the same place.”

Dr. Sevier noted that “both of these cases were assiduously nursed by one of our poorer class of citizens. The last patient was taken by this man to his residence, a humble but healthily-located dwelling. The patient slept overnight in the family room. The next day he was removed to a vacant house some two hundred yards distant, where he remained until he recovered.”

Sadly, the household of the man who had bravely tended the sick Greenevillians suffered as a result of his kindness. Sevier again: “The next case in succession, and the first among the (Jonesborough) resident population, was the wife of the man who had so kindly cared for the stranger. This woman died on the fourth day of her illness.”

The next cases in Jonesborough were, according to Sevier, four African-American laborers “who belonged to the gang working on the gravel-train of the railroad.” These man exhibited “violent features of the disease,” meaning they probably suffered extreme diarrhea and vomiting. “Two of these men,” Sevier wrote, “died within a few hours after their attack. A third, who lived one mile from town, recovered; but his mother, a feeble woman, who occupied the same house, contracted the disease and died. The fourth died of consecutive fever some weeks later.”

Doctors had little to go on in knowing how to treat cholera at that time. The “germ theory of disease” was only embryonic in the 1870s, the older, dominant idea being that such disease came from breathing unhealthy miasmas arising from rotting meat and so on.

There was a general public perception of cholera being associated with poverty and squalid living conditions, sometimes causing the poor to be blamed for the disease.

Physicians had to respond the best they could, basically working in the dark, not really knowing what caused cholera, exactly what spread it, and what it would take to get rid of it. Those cholera victims who were treated and survived probably did so primarily through good luck, not the shot-in-the-dark medical treatments they received.

Jonesborough’s Sevier, who estimated that half of that town’s cholera victims died, described the usual mode of treatment as follows: “The general plan of treatment had been based on the use of mercurials, opiates, quinine, brandy, sinapisms, etc. The results were anything but satisfactory.”

Time and a scientific analysis of the disease taught the world that unclean water, not some phantom “miasma,” was the real cholera culprit. Our modern water treatment systems thus are life-savers … for all of us who live where there are water treatment plants, anyway. Under-developed parts of the world still are out there, where clean water is hard to come by.

Believe it or not, our planet still loses about 120,000 lives to cholera every year, according to the World Health Organization.

So King Cholera isn’t fully off his throne yet.