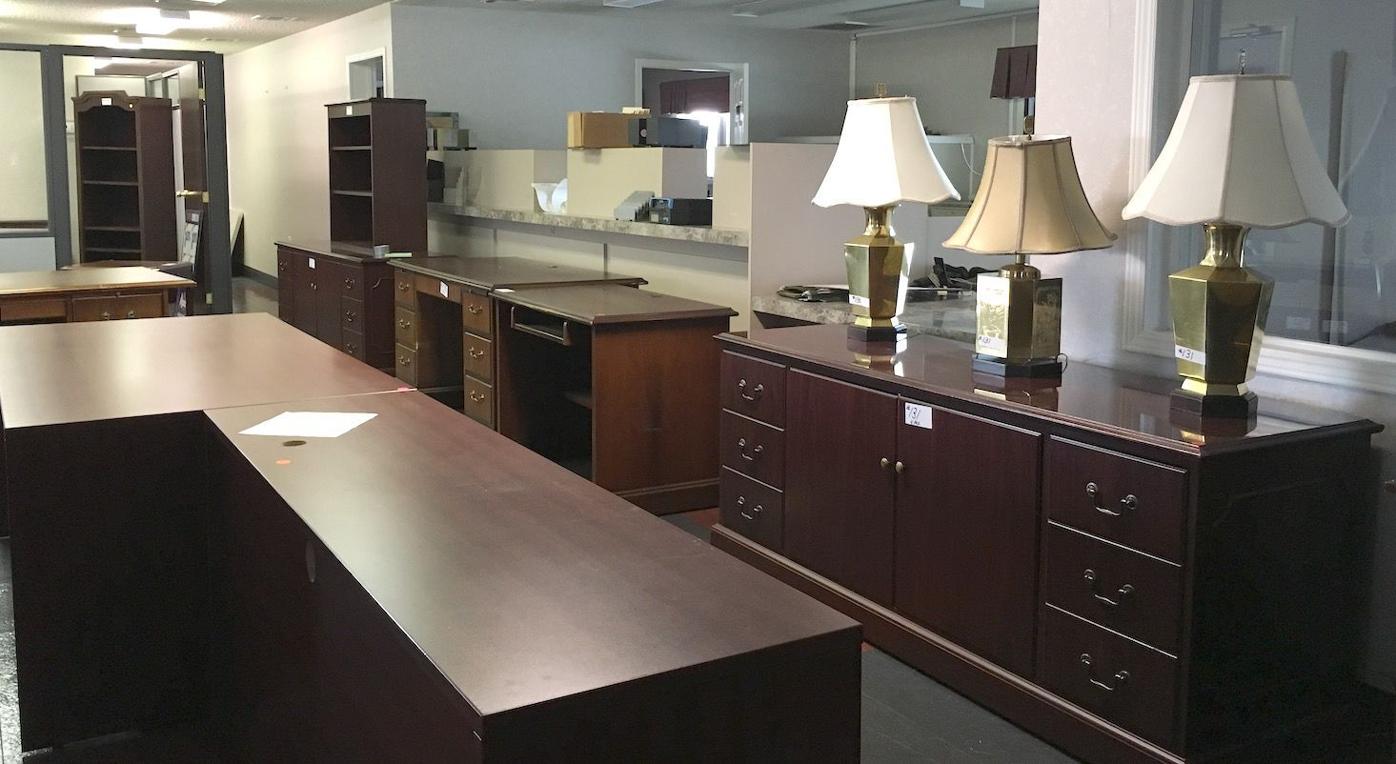 Several lamps and desks, among other electronics and bank and office furniture pieces, will be bid on through mid-March. 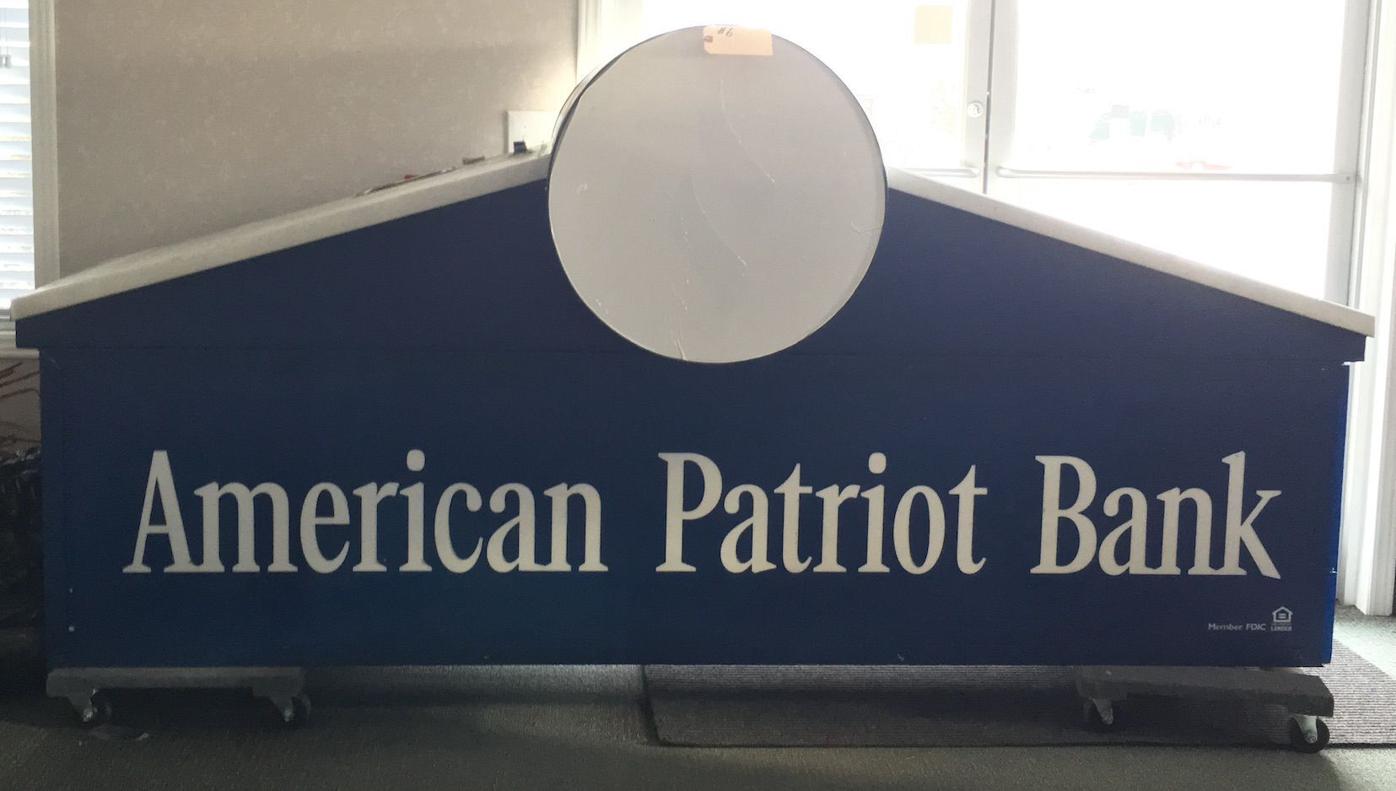 The sign that used to mark American Patriot Bank’s Greeneville location before it was purchased by Apex Bank is among the items for sale in the online auction. 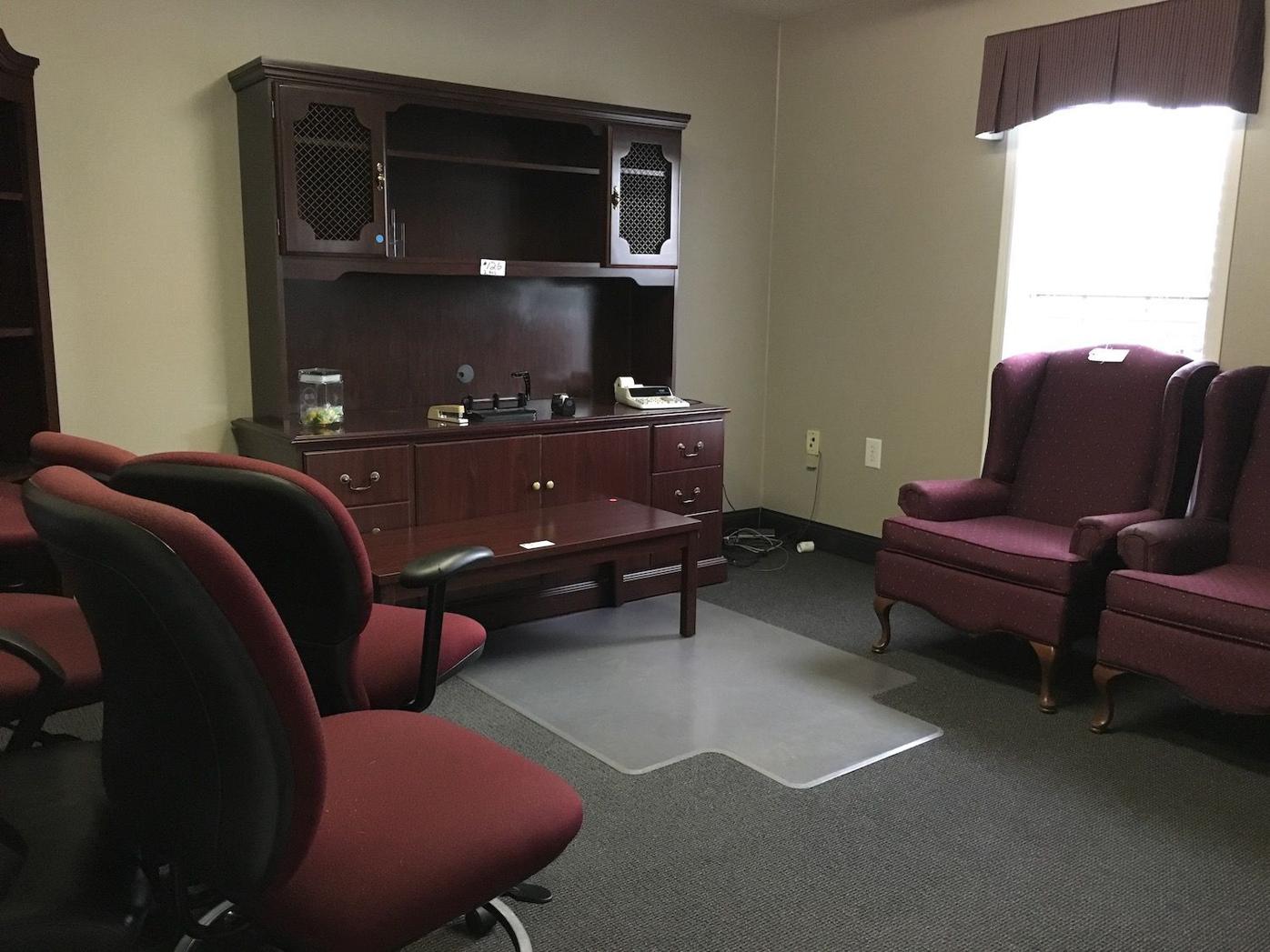 Some former bank offices are nearly as they were left, with the addition of storage items in the room, and nearly everything that has been stored in the former bank is catalogued for the auction.

Several lamps and desks, among other electronics and bank and office furniture pieces, will be bid on through mid-March.

The sign that used to mark American Patriot Bank’s Greeneville location before it was purchased by Apex Bank is among the items for sale in the online auction.

Some former bank offices are nearly as they were left, with the addition of storage items in the room, and nearly everything that has been stored in the former bank is catalogued for the auction.

Anyone interested in bidding on furniture and office equipment from former banks will have the opportunity to do so online over the next three weeks, and the proceeds will benefit United Way.

The items available to bid on came from several local banks that were purchased in recent years by Apex Bank.

“These are items that were cleared out from other branches and then stored,” said Tammy Kinser, manager of the Tusculum Boulevard Apex branch.

The former American Patriot Bank, which was purchased by and once housed Apex before it moved to its East Andrew Johnson Highway location, has been used for storage but is for sale by Apex.

Kinser said the former banks’ contents that are available through the auction could be ideal for an office, of the at-home or traditional variety.

“There is some really nice office furniture that could work for any office looking for pieces that match,” Kinser said. “There’s also some cabinets that lock, beautiful bookshelves, desks and office chairs. A lot of people have home offices now, and maybe they need a bookshelf or an office chair.”

“The furniture they used to have in banks used to be so solid and durable,” said Brandt Fitzpatrick, branch manager at the East Andrew Johnson Highway Apex Bank location.

Kinser added that the furniture would work as-is, or it could be refurbished and made into something new.

Electronics including copiers, printers and lamps are also included in the auction, as are some more bank-specific pieces like safe deposit boxes and the sign from the former American Patriot Bank.

Kinser and Fitzpatrick said the best part is that the proceeds from the auction after expenses will go to United Way.

“We’re really excited about the auction and where the money is going,” said Fitzpatrick.

“We’re clearing out the building, but our main focus is giving the proceeds to United Way,” Kinser said.

“We are very excited and super lucky to have a company like Apex willing to donate the proceeds from their surplus stuff,” said United Way Executive Director Wendy Peay. “We definitely need it this year. It’s been a challenging year both for folks in Greene County and for raising money.”

Peay said United Way helped one in three Greene County residents last year through the 30 programs in 25 organizations it funds locally, including the Boys & Girls Club. An allocation committee will determine which programs will receive how much of the donation from the auction.

Greeneville Real Estate & Auction Team is handling the auction through Proxibid, and owner Bill Brown said it is likely the first of many auctions hosted in that format.

Brown said new bidders must create a bidder account on Proxibid, and then they will be able to scroll through the catalogue and bid on around 200 items. Payment is handled by card on the site.

“Bidding will open at 5 p.m. on Monday and run until March 14, but the closing times will be staggered,” Brown explained.

Brown said that the staggered closing times will be scheduled so that the bidding on the first item closes in the morning on March 14, each lot after that will close in intervals of two minutes.

Bidders will be sent alerts to notify them when they are outbid, and there is no bidder’s premium, Brown said.

“They will be notified if they are the winning bidder and advised of when to pick up the items, which will probably be between Monday the 15th and Tuesday the 16th at a specified time,” Brown said. “There will be somebody at the bank to meet those customers, but if they’re buying a large item they’ll need to bring people with them to help load it.”

To see the items available in the auction or bid on any of them, visit www.proxibid.com/greeneville.

A physical preview of the items on site at 3015 E. Andrew Johnson Highway will take place on Wednesday only, from 10 a.m. to 3 p.m. Kinser said those interested may visit the site any time during that timeframe, and all will be asked to social distance and wear a mask while in the buildings.