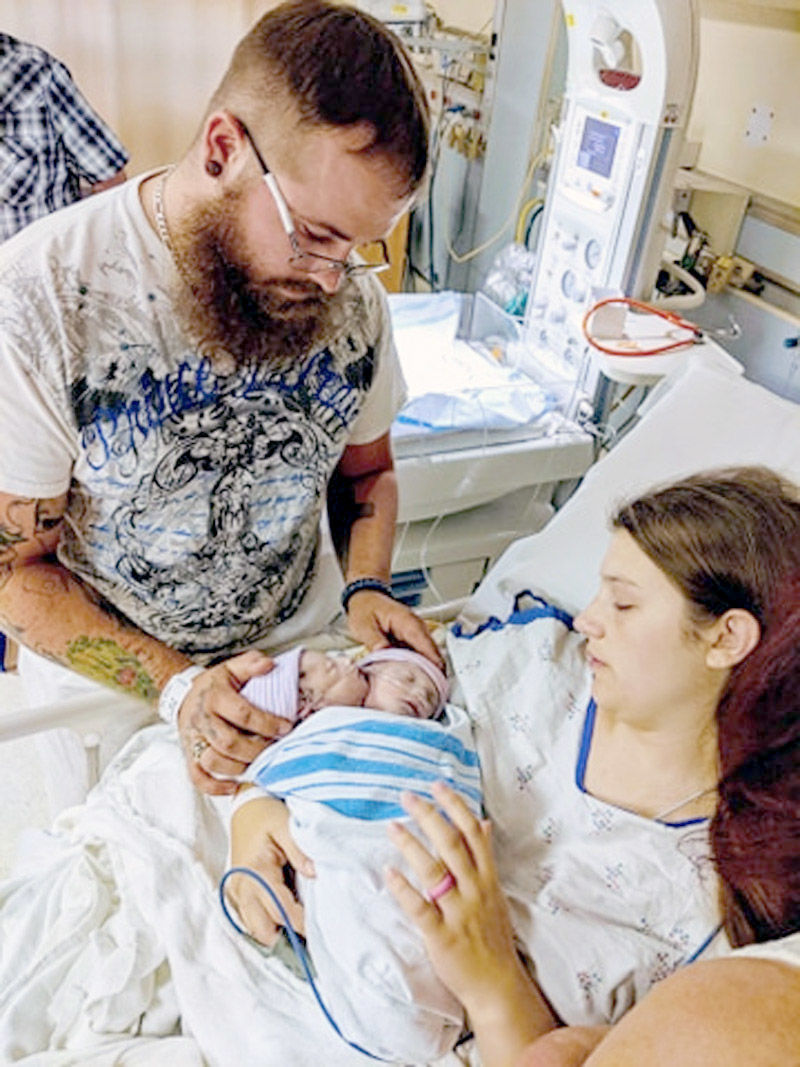 Austin and Christine Jones hold conjoined twins Nolen and Noel after their birth at University of Tennessee Medical Center in Knoxville. 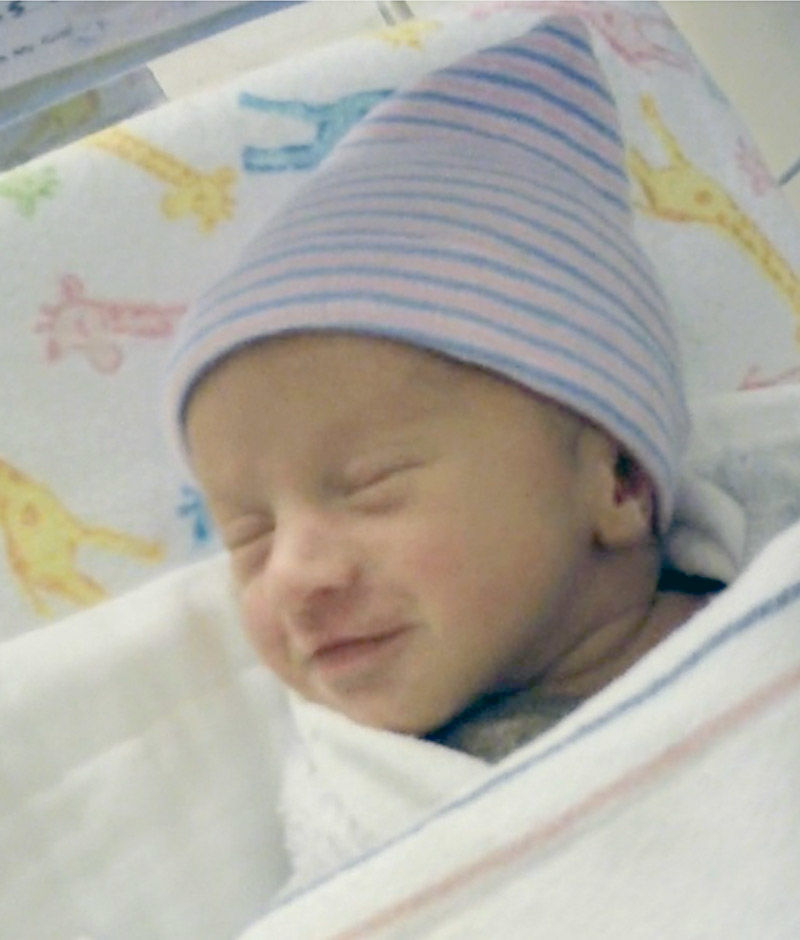 Noah Jones, non-conjoined brother of Nolen and Noel Jones, smiles in his sleep at University of Tennessee Medical Center at Knoxville.

Austin and Christine Jones hold conjoined twins Nolen and Noel after their birth at University of Tennessee Medical Center in Knoxville.

Noah Jones, non-conjoined brother of Nolen and Noel Jones, smiles in his sleep at University of Tennessee Medical Center at Knoxville.

Fifteen balloons rose into the sky in eastern Greene County Wednesday, and that they were colored in two different shades of blue was by intent.

The balloons were the part of a local family’s goodbye to two sons, born Friday in Knoxville’s UT Medical Center, only to pass away a little over two hours later. The brothers, Nolen and Noel Jones, were conjoined twins, and though they shared a single tiny form, they were individuals, an aunt and one of their grandmothers told The Greeneville Sun Wednesday afternoon.

That individuality was the reason behind the two different shades of blue on the balloons: one hue represented Nolen, the other Noel.

The balloons were released after midday funeral services for the boys in the Jeffers Funeral & Cremation Services Afton chapel.

Kendra Haynes, sister of Noel’s and Nolen’s father, Austin Jones, in an interview that she and her mother had requested with The Greeneville Sun, re-emphasized the point: Despite sharing one physical form, the boys “were two separate lives. Two souls, not the same person.”

Though the boys’ lifetimes in the world outside their mother’s body were exceptionally brief, those lifetimes were immersed from start to finish in the love and presence of parents and family. That family is left to grieve them today, but at the same time there is a third child receiving their love. That is Noah, Nolen’s and Noel’s brother.

Noah developed and was born along with his two brothers, but was not bodily conjoined to them.

Had the developmental process of Nolen and Noel not been affected by an unpredictable incomplete division of an egg cell, the three boys born Friday would have been triplet brothers, growing up together.

That two of the three boys were conjoined was something Austin and his wife, Christine, learned weeks before they made the journey to Knoxville’s University of Tennessee Medical Center for the cesarean delivery. They also already knew that a crucial artery had not developed to work with the single heart the boys shared.

That heart, Kendra said, possessed six chambers rather than the usual four, and doctors believed it could have sustained the boys had the undeveloped artery been there. Even so, the lack of the crucial artery made the possibility of long-term survival impossible.

Doctors had told them that, at best, Nolen and Noel could live only a few days, and would do so best within the embrace of their family rather than in an operating room undergoing futile surgery. As it turned out, the boys lived not days, but hours.

During that time, though, their parents were able to hold and kiss them while they still lived, and to see for themselves something attending nurses had commented on: the perfectly formed faces of the boys, whose shared form weighed 7 pounds, 2 ounces.

Non-conjoined brother Noah, delivered immediately after his brothers, weighed 4 pounds 10 ounces. He required some initial help with breathing and nutrition, but as of Tuesday was expected to be sent home with his parents this week, Kendra Haynes said.

Kendra’s mother, Tracy Throckmorton, who participated in the interview by speakerphone, said little Noah can anticipate a likely overload of attention and affection from his loved ones once he is home. Kendra and Tracy described Noah as a blessing and bright point in the midst of a sad time.

Making the loss of the two boys all the harder for the family is that death has not much touched the family previously, Tracy said. And though she is a person of faith, a worshiper at First Christian Church’s Afton location, the bereaved grandmother admitted she is struggling hard with one question: “Why?”

“I’ve got a lot of anger about this,” she said. “I just can’t understand why this should have happened.”

When she confessed her anger to her pastor, he assured her that her emotions are natural, and not wrong or offensive to God.

Another sentiment being experienced by the family, both women noted, is gratitude toward friends, neighbors and even complete strangers who are helping Austin and Christine through the sorrow and expense their situation has generated.

A Gofundme page created to help the family cover expenses for the parents of Nolen and Noel is gaining strong support. Publicized mostly through word-of-mouth and social media, the fund quickly began receiving support and reached half its goal, though family members say the other half is greatly needed as well.

Financial stresses on Austin and Christine Jones have been heightened by the fact Austin has been unable to work recently as he and Christine prepared for the birth.

Kendra noted, “I’ve seen people on that donor list I don’t even know.” She and her mother repeatedly stressed the family’s gratitude toward the caring people who are stepping in to help them.

As noted in their obituary, the boys are survived by their parents, plus two sisters and two brothers: Alexis Pierce, Bentley Jones, Rose Jones and Noah Jones; their grandparents: Angela and James Callahan, and Tracy and Monty Throckmorton; their great-grandparents: Butch and Dianna Haynes; a great-aunt and great-uncle: Butch and Sandy Haynes; aunts and uncles: Chatty and Isaac Trent, Kendra Haynes, Hayden Throckmorton, and Lindsey and Johnny Williams; cousins: Jason and Denise Trent, Tristan Wright, Gracie and Parker Williams, and Emma Haynes; and several other family members and friends.

Wednesday’s funeral was officiated by the Rev. Tommy Staggs.