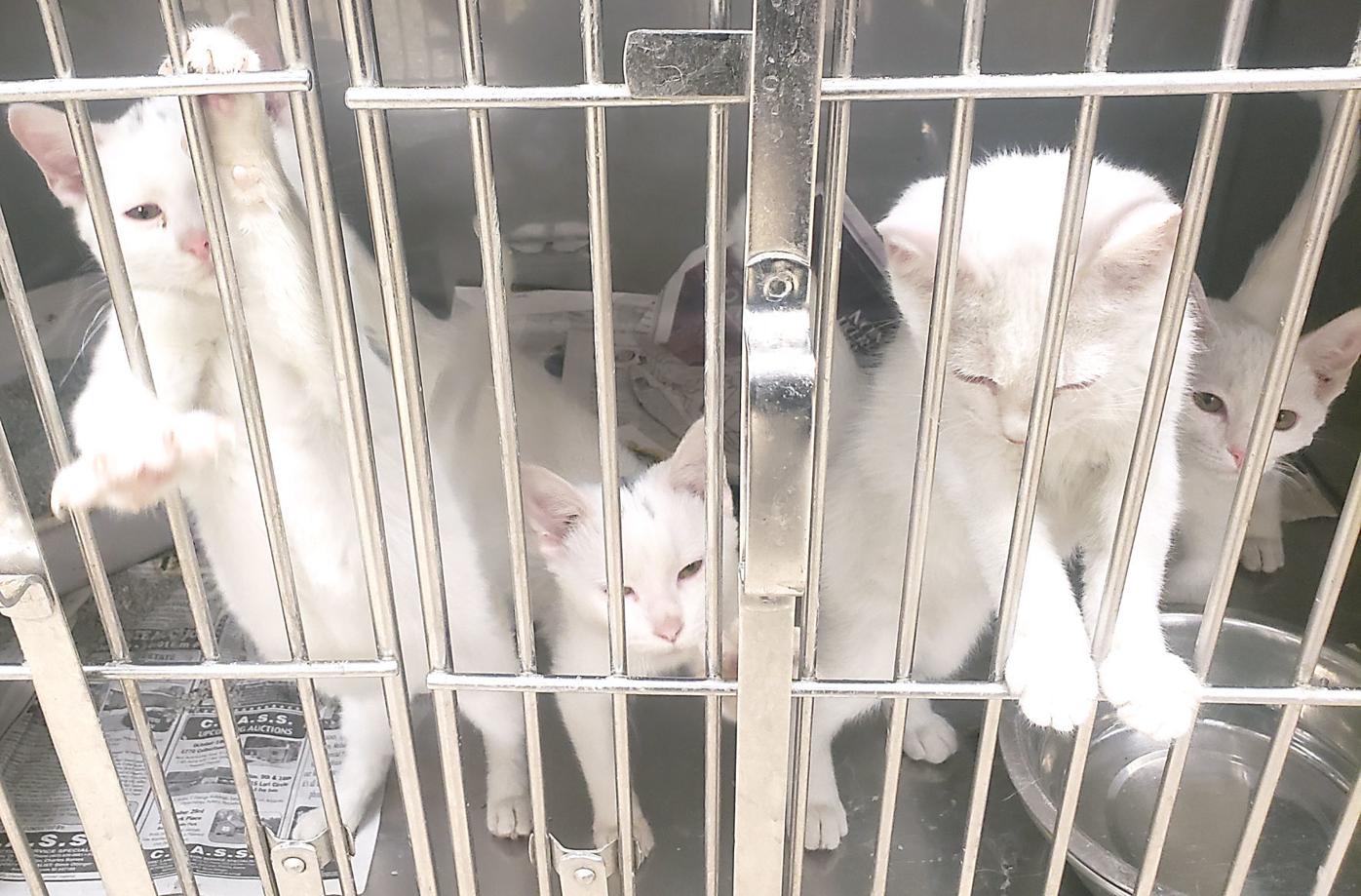 These four white kittens who were found in May with serious health issues in a Mosheim house have been nursed back to health and will be available for adoption from the Greeneville-Greene County Humane Society. 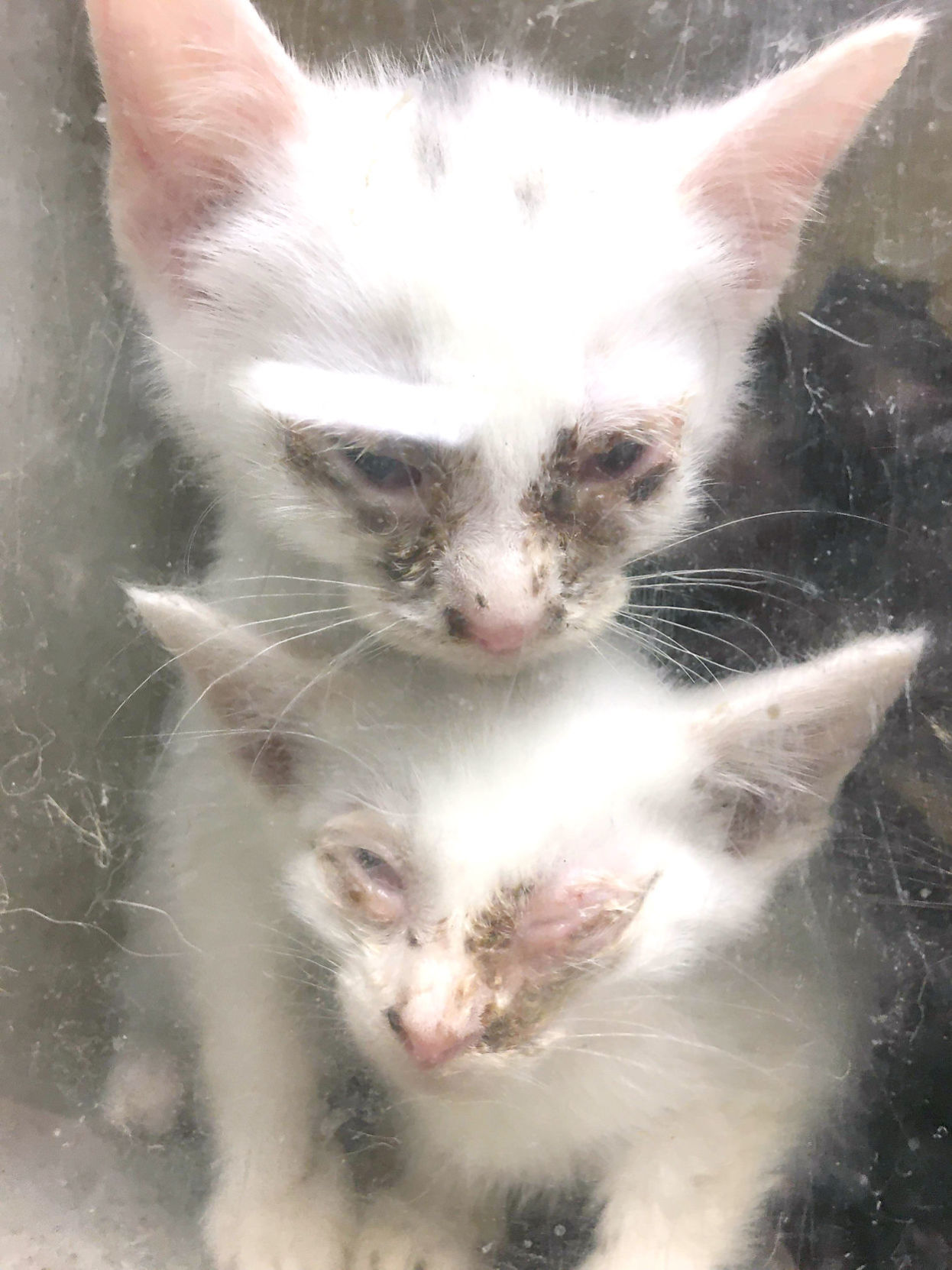 These two kittens were among 10 cats and two dogs suffering from numerous health issues that were removed in May from a Mosheim home. The owner entered a guilty plea Wednesday to cruelty to animals. The kittens were nursed back to health.

These four white kittens who were found in May with serious health issues in a Mosheim house have been nursed back to health and will be available for adoption from the Greeneville-Greene County Humane Society.

These two kittens were among 10 cats and two dogs suffering from numerous health issues that were removed in May from a Mosheim home. The owner entered a guilty plea Wednesday to cruelty to animals. The kittens were nursed back to health.

A Mosheim woman who pleaded guilty Wednesday to cruelty to animals was placed on probation and ordered to pay more than $6,000 in restitution for veterinary expenses to nurse eight cats and two dogs formerly in her care back to health.

Alice D. Seabolt, 46, of Wilkerson Road, was charged with the offense on May 18, three days after sheriff’s deputies went to the address to serve arrest warrants.

Deputies found 10 cats and two dogs living in squalid conditions and contacted county Animal Control, which came and removed the animals from the house. One cat died the next day and another had to be put down by a veterinarian.

The others were nursed back to health by veterinarians while at county Animal Control. The cats and dogs will be moved to the Greeneville-Greene County Humane Society soon for adoption.

Seabolt entered the best interest guilty plea at a hearing in Greene County General Sessions Court. She was sentenced to 11 months and 29 days in jail by Judge Kenneth Bailey Jr., given credit for time served and placed on probation for the remainder of the sentence.

Seabolt was ordered by Bailey to surrender any other animals she has. She was also forbidden to own animals for five years and placed on the Tennessee Animal Abuse Registry maintained by the Tennessee Bureau of Investigation.

Seabolt was also assessed about $300 in court fines and taxes, and ordered to pay $6,058 in restitution for veterinary expenses it took to restore the health of the cats and dogs found in her house.

“They were in horrible condition,” said Janet Medcalf, manager of the Humane Society’s adoption center.

A report said that after sheriff’s deputies went to the Wilkerson Road address on May 15 and knocked repeatedly on an open door and windows, cats and dogs began running out of the door and windows.

“Several cats had eyes matted shut and one cat (had) half a leg missing with a bone sticking out and (the) leg was raw,” the report said.

The animals “were in awful shape” and living in terrible conditions, the report said. Deputies entered the home “not only to look for the defendants (but) due to animal cruelty as well,” it added.

“It was a pretty bad case. The cats were in horrible shape,” county Animal Control Director Chris Cutshall said.

“Almost all of the cats had upper respiratory issues and one cat was missing a back foot and it had a bone sticking out,” he said. “The leg was amputated and now it’s doing really well for a three-legged cat.”

When deputies contacted Animal Control, there were 20 to 25 cats in the house, along with three dogs living “in very poor conditions for the animals,” the report said. Some of the cats were feral and difficult to catch.

An Animal Control officer was able to round up 10 cats and two dogs, including nine kittens and a young adult cat.

“We began treating those cats immediately. They had ear mites real bad” in addition to the upper respiratory infections, Medcalf said.

One of the dogs lost its fur because of a skin infection and was “treated over a long period of time,” Medcalf said.

“They’re recovering. We had to do a second round of antibiotics,” Medcalf said. “They will be available for adoption.”

Veterinarians from the Animals West Veterinary Hospital treated the cats and dogs.

“The Humane Society has been a great help in this case with with vet bills. They have helped a great deal with it,” Cutshall said.

Seabolt told an Animal Control officer that she was caring for the animals and was taking them to the vet as needed.

“It’s pretty obvious that was not the case,” Cutshall said.

A best interest plea means that a defendant does not admit guilt to any offense, but agrees that a guilty plea is in his or her best interest under the circumstances.

Medcalf is grateful the eight cats and two dogs removed from the home that survived were able to receive much-needed medical attention and will have the opportunity to find a permanent home with responsible owners.

“We’re just kind of lucky (deputies) went down there. It’s sad,” she said.

“They look so good now with much needed love and medical care,” Medcalf said. “It’s good to show we do get some justice for animals. We are trying, but sometimes the system works against us.”

“You have to care for it. Whether it’s healthy or sick, you still got to feed and water that animal,” he said.

The Humane Society seeks donations from the public to help defer the costs of nursing the cats and dogs back to health.

“Our need for these donations will continue as we care for the dogs and cats until they are adopted,” Medcalf said.

Monetary donations to help with the animals’ care can be made at the Adoption Center at 950 Hal Henard Road, by mail at P.O. Box 792, Greeneville, TN 37744, by phone at 423–639-4771, or online on the Humane Society website link at gchumanesociety.com