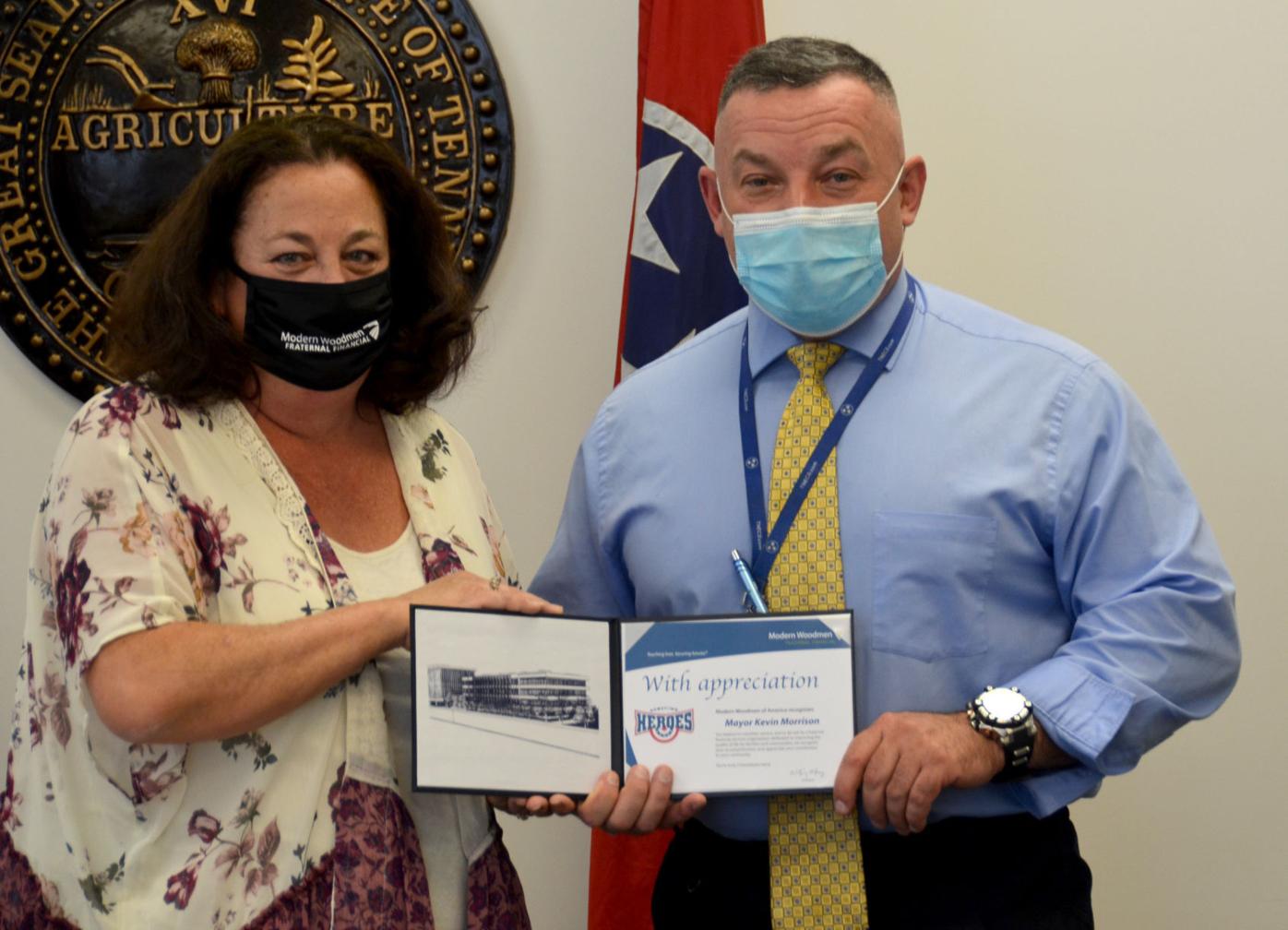 Greene County Mayor Kevin Morrison was surprised Monday afternoon with recognition as a hometown hero for his leadership in the pandemic by Vera Ann Myers with Modern Woodmen.

Greene County Mayor Kevin Morrison was surprised Monday afternoon with recognition as a hometown hero for his leadership in the pandemic by Vera Ann Myers with Modern Woodmen.

Modern Woodmen of America has a program that allows its representatives to recognize and express appreciation to essential workers who have faced significant challenges to serve the public during the pandemic.

When Vera Ann Myers, activities coordinator for the local Modern Woodmen chapter, learned of the program and the ability to choose groups to recognize, there was one that immediately came to her mind.

On Monday afternoon, Myers made a special presentation to that group, the employees of the Greene County Clerk’s Office. The program by Modern Woodmen, a fraternal benefits organization, is designed to recognize hometown heroes, Myers said, and the Clerk’s Office can truly be defined in that way.

Services provided by the Clerk’s Office have continued to be just as necessary during the pandemic, and the office serves almost every Greene County family in some way, Myers said.

“I wanted to honor a group of people that might not be immediately thought of or who gets recognized that often,” she told the Clerk’s Office employees. “Thanks for all you do.”

This past year has also been a tough one for the Clerk’s Office, Myers noted. Almost a year ago, Rebecca Bales, a longtime employee, lost her battle with melanoma. This year began with the death of another longtime employee, Janet Waddell, who had contracted COVID-19.

Asked if she wanted to say anything, Greene County Clerk Lori Bryant told her employees, “You are my hometown heroes.”

She thanked them for their hard work and dedication to continue serving the public during such a difficult time for not just the community but in their office as well, which she described as a family.

After handing out goodie bags filled with scented lotions and skin care products to the Clerk’s Office employees, Myers was not finished with the presentations. Greene County Mayor Kevin Morrison was surprised with a presentation to thank him for his leadership during the pandemic.

In her Junior Modern Woodmen group, the youngsters learned about what a county mayor does and what Morrison has done during the pandemic, Myers explained.

The youngsters created handwritten “thank you” notes for the mayor. One youngster thanked him “for keeping us safe.”

Myers said she wanted to recognize Morrison after learning how he is on the job seven days a week and often long hours, and works almost every day at the COVID-19 vaccination site at the former Greene Valley Developmental Center.

Other county employees and officials that witnessed the presentation thanked Morrison for his leadership, his hard work and his genuine care for the county and its citizens.

As part of their recognitions, both the Clerk’s Office and Morrison will be able to choose a charity to have a $100 donation made to in their name by Modern Woodmen.

Modern Woodmen will be recognizing other groups such as teachers, emergency responders and health care professionals later in the year. This month, Modern Woodmen have thanked some local grocery workers for their efforts as well.