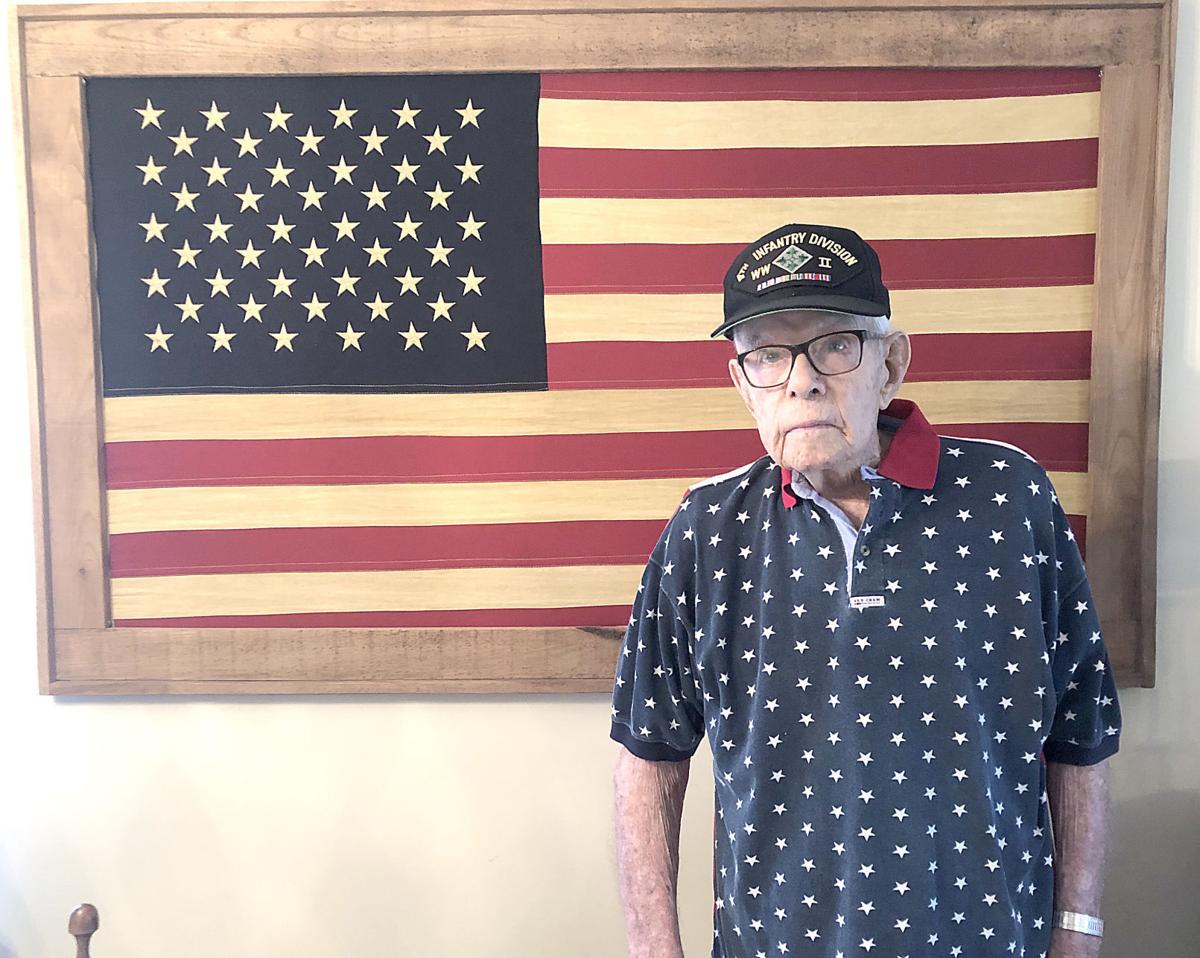 World War II and D-Day Veteran Arthur Ricker stands in front of a 48-star U.S. Flag in his Tusculum home. 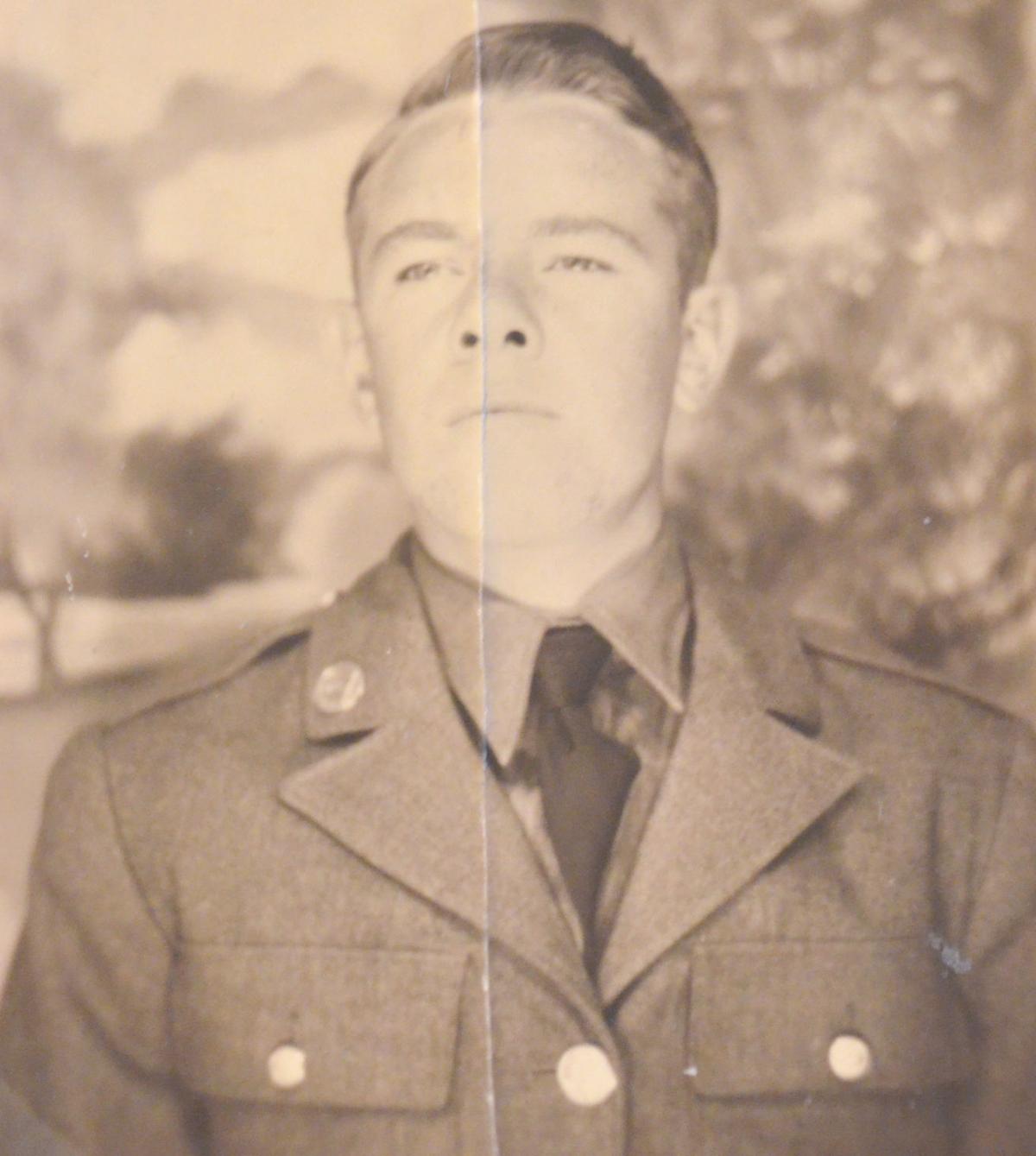 This photo of Arthur Ricker was taken shortly after he enlisted in the U.S. Army in 1940 at age 19. He was 23 when the 4th Infantry Division he served in landed on Utah Beach in France on June 6, 1944. 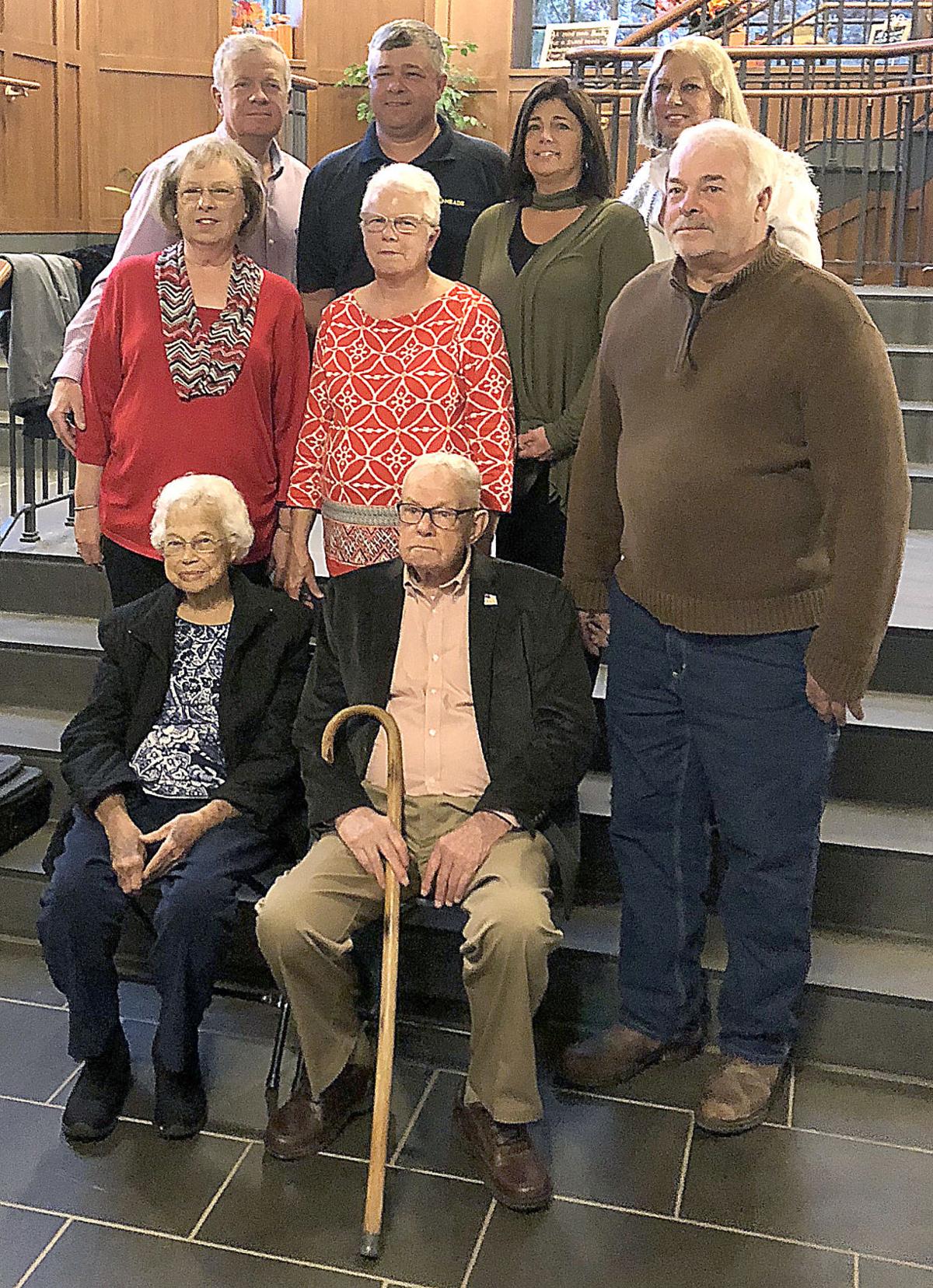 World War II and D-Day Veteran Arthur Ricker stands in front of a 48-star U.S. Flag in his Tusculum home.

This photo of Arthur Ricker was taken shortly after he enlisted in the U.S. Army in 1940 at age 19. He was 23 when the 4th Infantry Division he served in landed on Utah Beach in France on June 6, 1944.

At age 99, Arthur Ricker is one of a handful of surviving veterans who can recount what he saw and heard on D-Day.

Ricker’s future was uncertain on June 6, 1944, when he participated in the biggest military operation in history as a member of the U.S. Army’s 4th Division that stormed Utah Beach in Normandy, France.

Seventy-six years later, the lifelong Tusculum resident frequently thinks about his role in World War II. Ricker is modest about his service, but is regarded by many as a hero.

Ricker said Friday that D-Day does not feel so distant.

“It doesn’t seem like it’s been that long. I guess I think something about it every day,” Ricker said. “I think of God. He spared my life.”

Ricker, who was 23 when he hit the beach, was a combat engineer with the 4th Division until the end of the war in Europe.

He described Friday, and in recollections from earlier interviews, what it was like to fight his way across France and Germany.

Called “Operation Overlord” by military planners, the invasion has been known ever since as simply “D-Day.” On June 6, 1944, more than 160,000 Allied troops landed along a 50-mile stretch of heavily fortified French coastline. More than 5,000 ships and 13,000 aircraft supported the invasion. By day’s end on June 6, the Allies gained a tenuous foothold in Normandy.

The D-Day cost was high: more than 9,000 allied soldiers were killed or wounded, but Ricker and the others began the long march across Europe to defeat Nazi Germany.

Along the way, “I had to learn a lot of things the hard way,” Ricker said.

“The German soldiers, they were very good at camouflaging. That was in their favor. A lot of times, they would sit and wait on you,” he said. “They were good at what they were doing and it was a learning process. We were always coming up against something different.”

“As we advanced through the hedgerow country of Normandy, we were under fire,” Ricker said. “There was no protection. Everybody was fair game, I guess.”

The costly eventual breakout into the French countryside took weeks. Ricker served under Gen. George Patton, a hard-fighting commander who was no stranger to controversy.

“The Germans did not like him. They were afraid of him,” Ricker said.

Ricker knew enough about world events as a young man to think the United States would eventually enter World War II, prompting him to join the Army in 1940, at age 19. On D-Day, he found himself aboard a troop ship that was part of a vast armada steaming toward the shore of France.

Bad weather delayed the landing on the Normandy beaches for one day. Ricker recalls hearing explosions nearby in his troop ship as he waited out the long hours until the invasion began.

“There were apparently German subs in the area and you could hear depth charges being set off in the (English) Channel,” he said.

The fighting began as soon as Ricker hit the beach.

“The first day on that beach an (enemy artillery shell) killed one of my best friends. I was standing, I think, about six feet from him,” he said. “We landed at Utah Beach and from there we moved inland.

“Our next objective was to capture Paris, which was a great distance away,” Ricker said.

There was plenty of fighting before Paris was occupied in August 1944 by the Allies. Ricker recalls the deliriously happy crowds that greeted American and French soldiers.

“We left Paris and our next objective was the Ardennes front,” he said.

Ricker’s job as a combat engineer included demolitions, repairing blown bridges, building new ones, and breaching prepared fortifications like the formidable Siegfried Line along the German border. He was also rated an expert marksman.

“We had to build bridges and do a lot of things to help the infantry advance,” Ricker said. “It seemed like every time we turned around there was a creek to cross.”

Fighting got harder as the troops approached the German border.

“The worst place I ever fought was the Siegfried Line,” Ricker recalled. “I think the Hurtgen Forest was the worst battle I’ve ever been in. We lost a lot of men there.”

In one instance, the German defenders in a pillbox refused to surrender. A bulldozer had to be called in “and they covered it up,” he said.

Ricker’s unit helped turn back the surprise German counteroffensive in December 1944 known as the Battle of the Bulge, also fighting the bitter cold in the process. The 4th Division crossed the Rhine River at a German city called Worms. Ricker ended the war in Bavaria, in Southern Germany.

V-E Day on May 8, 1945, “was a joyful day” for Ricker, whose happiness at the end of the war was tempered by what he saw at a Nazi concentration camp in Bavaria as the 4th Division advanced through the mountainous Alps region.

“This brought us into a place I wish I had never seen,” Ricker said.

Dachau originally housed political prisoners and eventually included the imprisonment of Jews, German and Austrian criminals and foreign nationals from countries that Germany occupied or invaded.

Dachau and similar, smaller camps in the region were liberated by U.S. troops, including the 4th Infantry Division.

“What it was, it was furnaces where they burned human flesh,” Ricker said. Allied Commanding Gen. Dwight D. Eisenhower, Gen. Omar Bradley, Patton and other top military “brass” toured the camp several days later to see for themselves the brutal inhumanity of the Nazi regime. Patton, known as a tough solider, became physically ill.

“It was unreal,” Ricker said. “I was asked the question, ‘What would you do if you saw (Adolf) Hitler?’ I said I’d have shot him.’”

Ricker knows why he and his brother Walter survived hazardous military duty in World War II.

“I had a praying mother and both of us got back unhurt. I believe she could get in touch with God,” he said. “My mother was a prayer warrior.”

The late Tracie Hull Ricker Hux, widowed when her son Arthur was 2, helped instill a strong sense of faith in her sons. Arthur Ricker said his faith helped him cope with his wartime experiences.

Ricker shares those experiences as a way of helping younger generations understand the true cost of freedom. He just watched the World War II movie “Saving Private Ryan” for the first time this past week.

“Some of it I agree with, and some of it I think was blown out of proportion,” he said.

“I don’t have anything to gain by giving false information. I tell it like it is,” Ricker said. “I just want to be humble and tell the truth.”

Ricker downplays his role, but is proud to have fought in a war that safeguarded the freedoms that Americans enjoy today. He has regularly spoken to young people about his World War II experiences.

“I just thank God that he brought me through all that and he brought me back to my country and my friends and my family,” he said.

Of 16 million Americans who served in World War II, about 300,000 are alive in 2020, according to the U.S. Department of Veterans Affairs.

Ricker lost his wife of 72 years, Edith, in 2019. His seven children and their families still live in Greeneville. An eighth child is deceased.

His first-born child, Diane Crum, and his first grandchild both share the same birthday — June 6.

“Our dad is a blessing to us. We are so proud of our hero,” daughter Connie Ricker Smith said Friday.