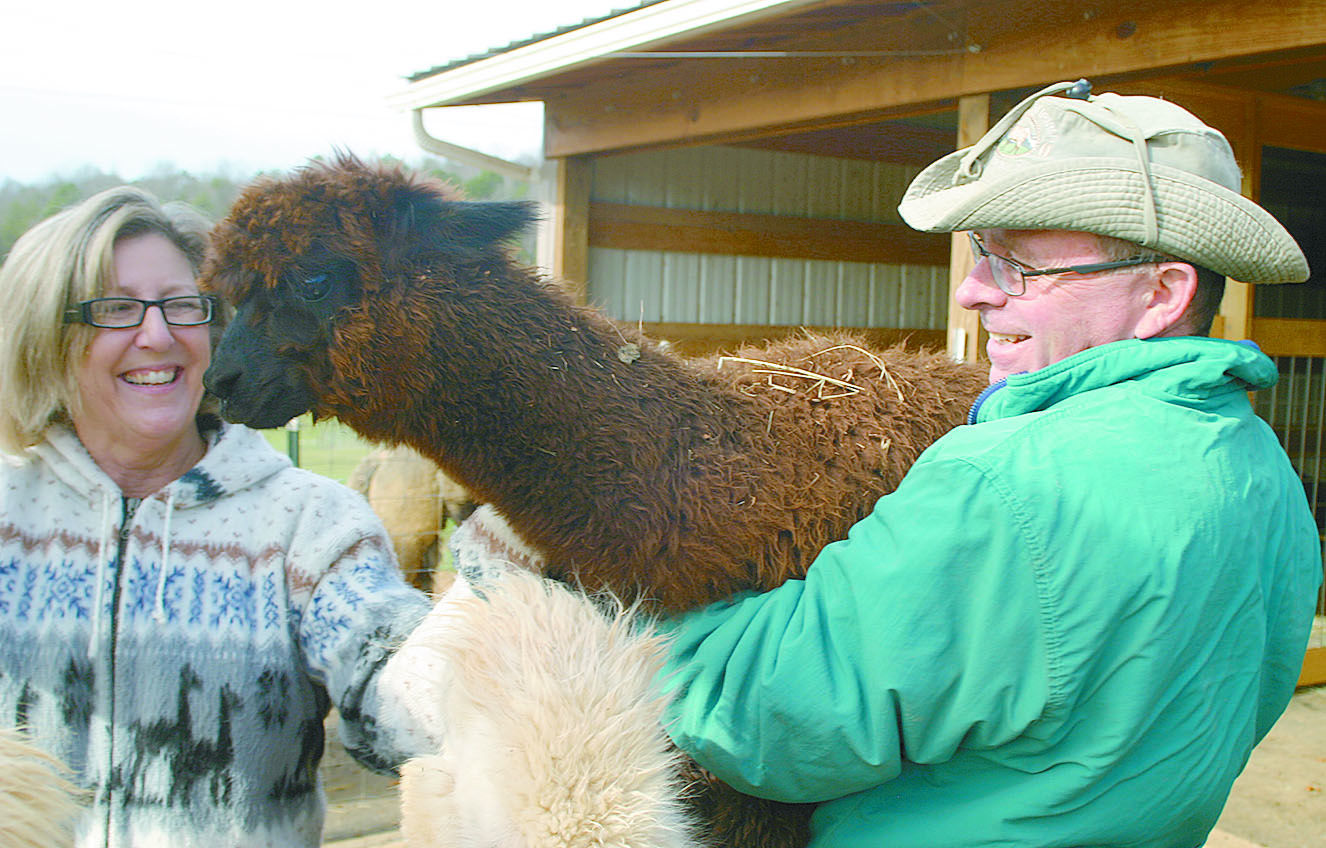 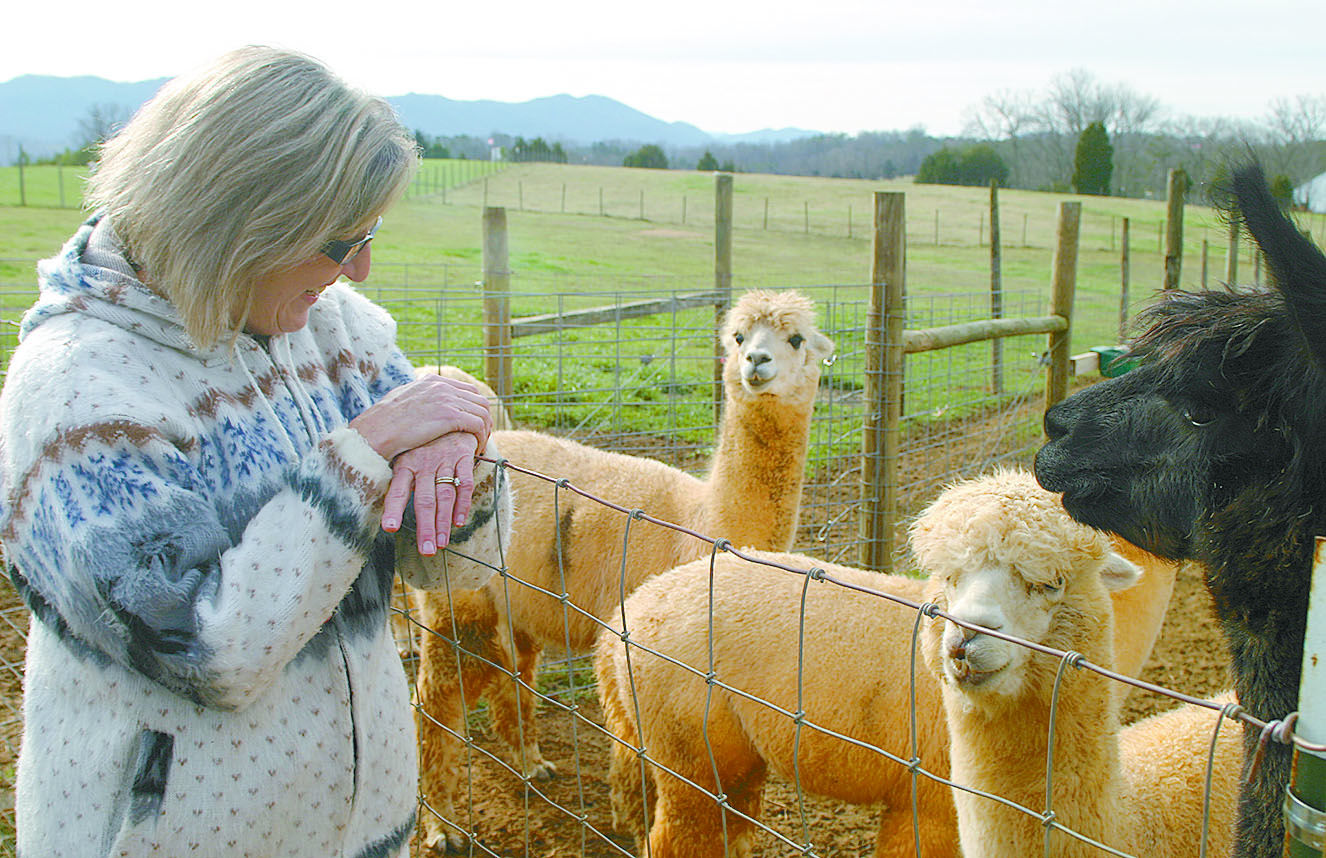 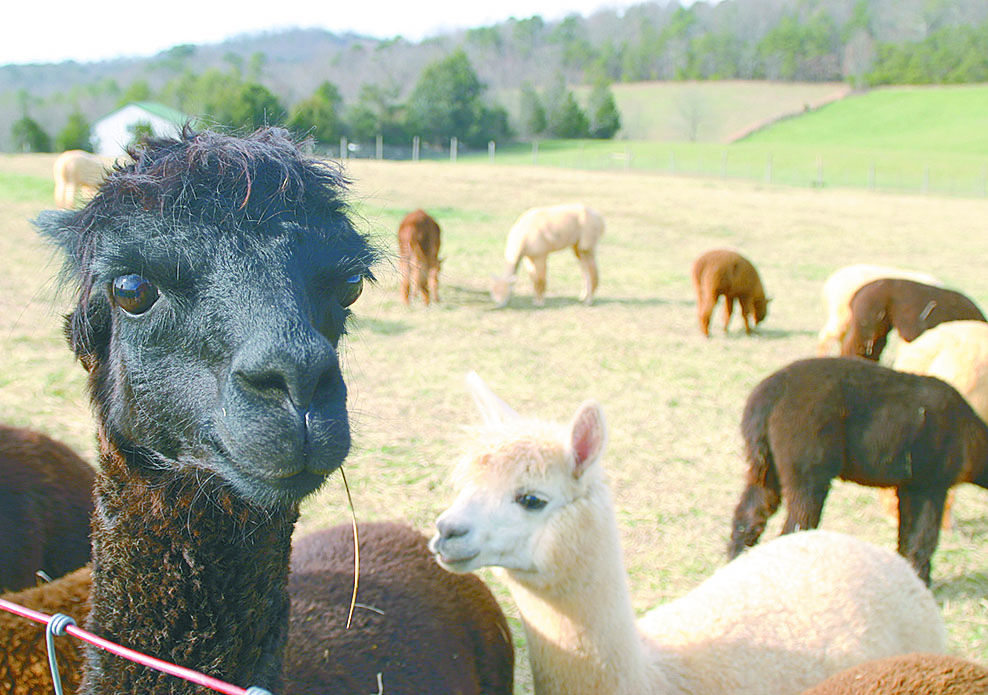 It took a second for Ruth Anne Goss' voice to reach the herd.

But, once her cry of "Here, babies!" and the rattling of the food bucket registered, the peaceful scene of animals grazing was broken. A scramble to be the first in the chow line ensued.

It's a typical scene for Ruth Anne and her husband, Brad Goss. For just a little over a year, an approximately 5-acre portion of their 130-acre farm, located in the St. James community, has been set aside for their more than two dozen alpacas.

And while Brad said alpaca ranching has not gone "mainstream" just yet, the Goss' farm, Two Roots Alpacas, is just one of several alpaca farms that can be found in Greene County.

"I wouldn't say it's a trend, but I do think it's an alternative lifestyle that people are really enjoying having," Ruth Anne said.

The Gosses have lived here since June 2013, cultivating a vineyard.

They found a little something extra while traveling the Quilt Trail in October 2013. Among the stops were several alpaca farms.

Initially, the Gosses hoped to purchase six alpacas for their farm. However, the couple got a honey of a deal from a rancher in Smithville looking to get out of the alpaca business; they were able to purchase an 18-alpaca herd for the normal cost to buy six.

"They're definitely a herd animal," Brad said. "You can't have one."

Since acquiring these alpacas in October 2014, the Goss' herd has grown. They have acquired four more from West Virginia, three more from a farm along West Allens Bridge Road and, in June, saw the births of four more.

Among the group is Leo, a large "guard llama" who's responsible for protecting the alpaca herd.

The 29 alpacas on the Goss' farm range in age from 6 months to 15 years. Ruth Anne said the typical alpaca lifespan is up to 20 years.

For alpaca farmers, perhaps the main draw is the fiber that comes from their fleece. The Gosses shear their alpacas near the end of April, as North American summers can be somewhat harsh for the animals.

Once sheared, the fiber is skirted -- essentially, cleaning it. The Gosses send off the fiber for processing into yarn or roving, which is material that would be sent through a spinning wheel or used to make felt products.

Ruth Anne said some of the fiber is sent to a local fiber mill for processing. Another portion goes to a co-op, which allows the Gosses and other farmers to purchase finished products made from alpaca fiber for a discounted price in exchange for the fiber from their herd.

Products from Two Roots Alpacas, such as gloves, purses and hats, are sold through the Greeneville Farmers Market, via the farm's website www.tworootsalpacas.com, and at craft shows.

"I think people are realizing they are good livestock. They do produce fiber and that's where their worth is," Ruth Anne said.

Because the Gosses are still fairly new to the alpaca game, Brad said he is waiting to see to what degree having the alpacas will payoff.

"It's not clear to me yet just how profitable these are going to be," he said. "I think that's a little bit of a 'wait and see,' just to see whether or not there's enough fiber produced and enough of a market for the fiber products."

The Gosses said alpaca maintenance is not as taxing as other livestock. Alpacas have padded feet and the animals' stature belies their weight. Male alpacas typically weigh only 170 to 180 pounds.

The animals dine on hay, pasture grass or a feed that the Gosses place in buckets or provide by hand. They don't pull grass out of the ground or graze in one spot.

And, yes, alpacas spit, but, Ruth Anne said, typically only at one another.

She said alpacas are easy to handle and intelligent. While somewhat aloof, they are curious animals and like to be around people.

"And they're just pretty," she said.

Ruth Anne said that she knows of at least six other alpaca farms in Greene County, and she estimated there could be 10 or more.

Among those farms is Appalachian Journey Farm in Limestone, which is co-owned by sisters Lara Durham, Joan DuPont and Diane DuPont.

"The animals themselves are just extremely endearing," Joan said. "They are not aggressive animals, so it's not the kind of thing where you have to worry about children or people being hurt by them. They are easily handled if they're put into a confined area first and if they're accustomed to being handled."

Appalachian Journey Farm is home to 46 alpacas, 14 of which are owned by Louis Nuttle.

Like the Gosses, Joan and her sisters are in the alpaca business for the fiber.

"We've been doing better and better at that every year just simply because of people's exposure to it and their becoming more and more familiar with what alpaca and alpaca products are," Joan said.

Joan said the warm, water-resistant fiber of the alpaca is lanolin-free.

Appalachian Journey Farm has had animals since 2001. Joan said Lara took an interest in alpacas after reading an article about them and following a visit to a farm in North Carolina. Lara, Joan said, was looking for an animal that would be safer around her children.

"She had been breaking and training horses, and she just felt that was just a little too dangerous for her young ones to be around," Joan said.

Lara started with three females but, over time, Joan and Diane have purchased more alpacas and the herd has also grown through breeding.

"I've got a group of 26 of them in one of our pastures and, on any given day, if I do a thorough cleanup and feeding, it won't take more than an hour-and-a-half," she said. "So that's not a lot of time during a day for that many animals."

Joan said the best of the prime fiber from her alpacas is selected and sent off for processing into yarn or roving.

Joan said large scale farms with several hundred alpacas are few and far between, with such farms focusing more on breeding and even cull some of the herd.

"Now there's actually a market for their meat in the United States, which there was not years ago," Joan said.