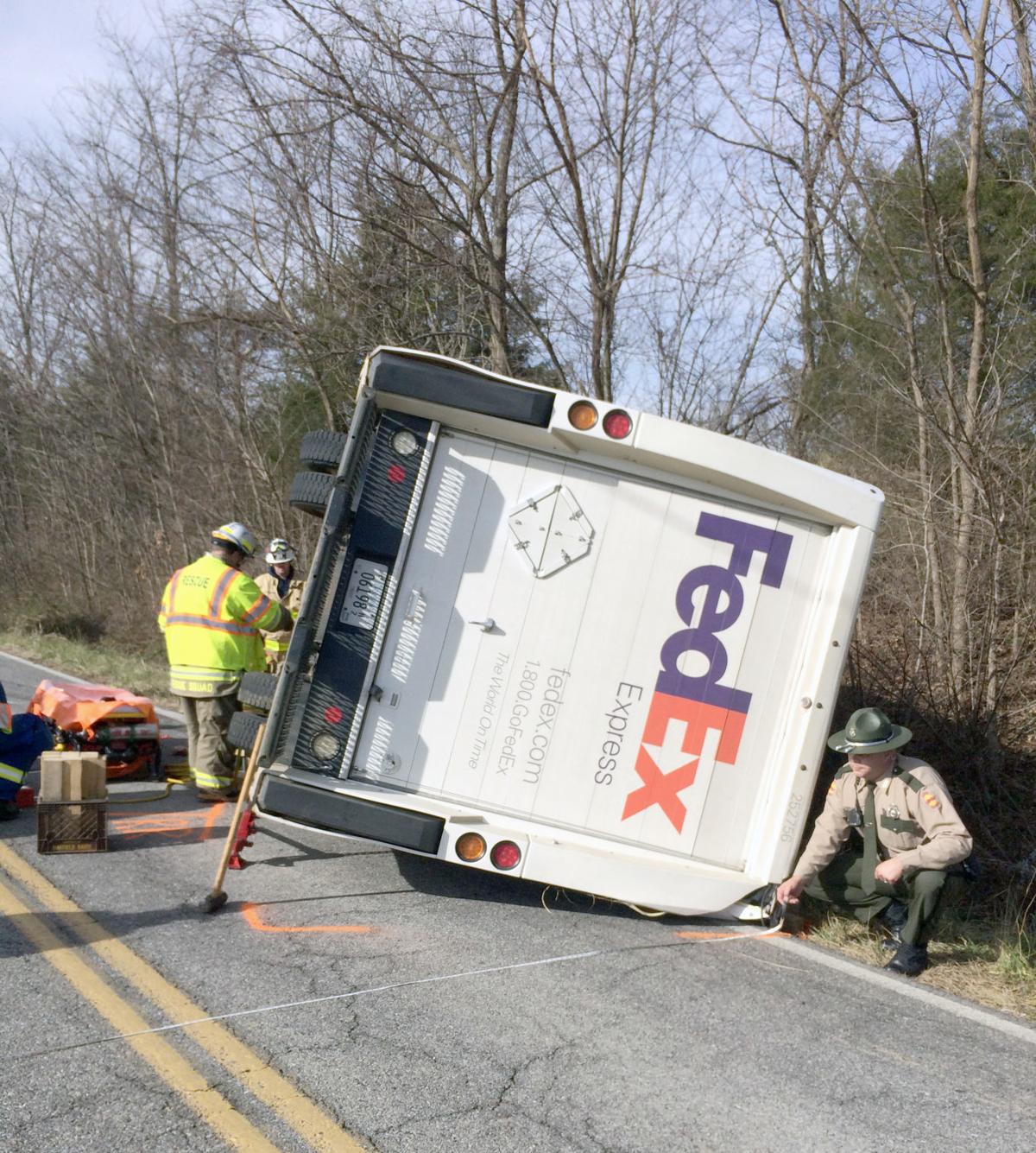 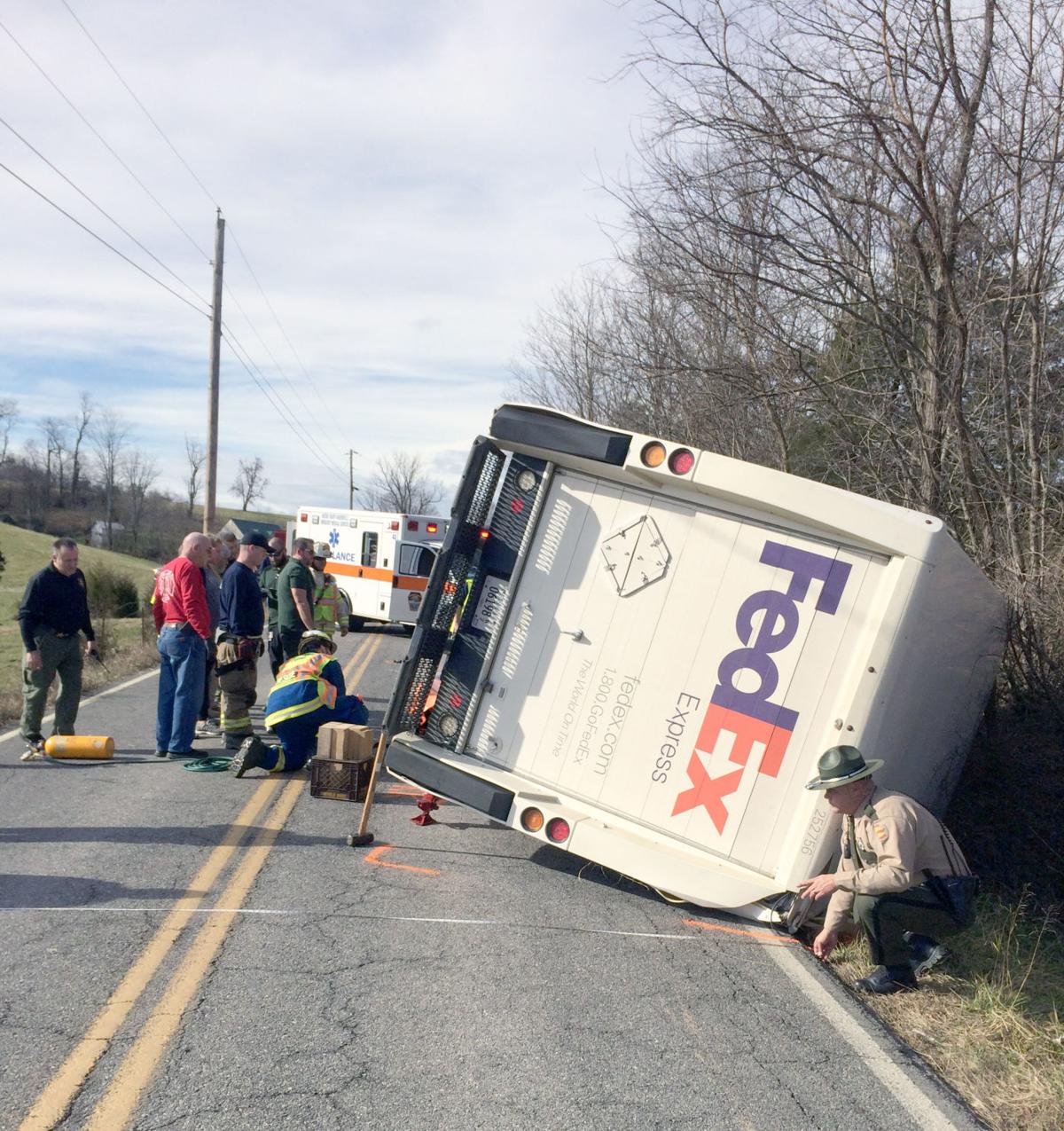 The Tennessee Highway Patrol and other first responders examine a FedEx delivery truck that crashed just after noon on Monday on Buckingham Road, killing the driver. Sheriff Wesley Holt is at left.

The Tennessee Highway Patrol and other first responders examine a FedEx delivery truck that crashed just after noon on Monday on Buckingham Road, killing the driver. Sheriff Wesley Holt is at left.

A man driving a FedEx delivery truck was killed just after noon Monday after the truck went off Buckingham Road before overcorrecting and flipping on its side, ejecting him.

Driver Cody S. Adkins, 29, of Rogersville, was pronounced dead at the scene.

The Tennessee Highway Patrol investigated the crash, which happened in the 3200 block of Buckingham Road. Emergency personnel were dispatched to the scene just before 12:10 p.m.

The driver was coming from Greeneville. First responders at the scene said the full-size FedEx panel truck momentarily went off the road while rounding a curve in an area with a narrow shoulder. The driver apparently overcorrected and the truck spun sharply around in the roadway, landing on its side in a ditch on the opposite side of Buckingham Road.

The delivery truck’s sliding door was open. A report by Trooper Johnnie Saayman says Adkins was not wearing a safety belt, and that use of a safety restraint could have made a difference in the outcome of the crash.

Saayman’s crash narrative said Adkins was traveling east on Buckingham Road and negotiating a curve to the left when the 2013 Isuzu panel truck’s right rear wheels left the roadway. Adkins corrected, and the right front and rear tires again left the roadway on the right side.

The crash report says Adkins overcorrected, and the vehicle re-entered the roadway to the left, then rolled over onto its right side, across the center lane.

The vehicle “came to an uncontrolled stop,” Saayman’s report said.

Traffic in the area of the crash was diverted until a wrecker could remove the truck. FedEx management arrived at the scene about an hour after the crash.

Stanley Ball of Greeneville was working nearby and on his way to lunch when he drove up on the crash scene. Ball stopped and immediately checked on the driver, who was against the underside of the FedEx truck.

The truck was still running.

“He was gone,” Ball said as he waited to give information to authorities.

The hand-held scanner device used by couriers to find addresses lay in the road near the truck, along with other debris.

Adkins was the sole occupant. No other vehicles were involved in the crash.

The wreck occurred in the area of the Greeneville Water Filtration plant. The fatality was the 19th on Greene County roads in 2018.

In the 24-month period prior to December 3, 2017, FedEx Express drivers were reported to have been involved in 1,762 crashes, according to the Fried Rogers Goldberg LLC law firm of Atlanta.

The law firm’s website said that 575 of those crashes involved injuries, and there were 41 fatalities.

In response to a request for comment about the Buckingham Road crash, FedEx Global Communications official Steve Barber said, “We are deeply saddened by the loss of our team member in this tragic accident. Our thoughts and prayers are with his family and friends.”