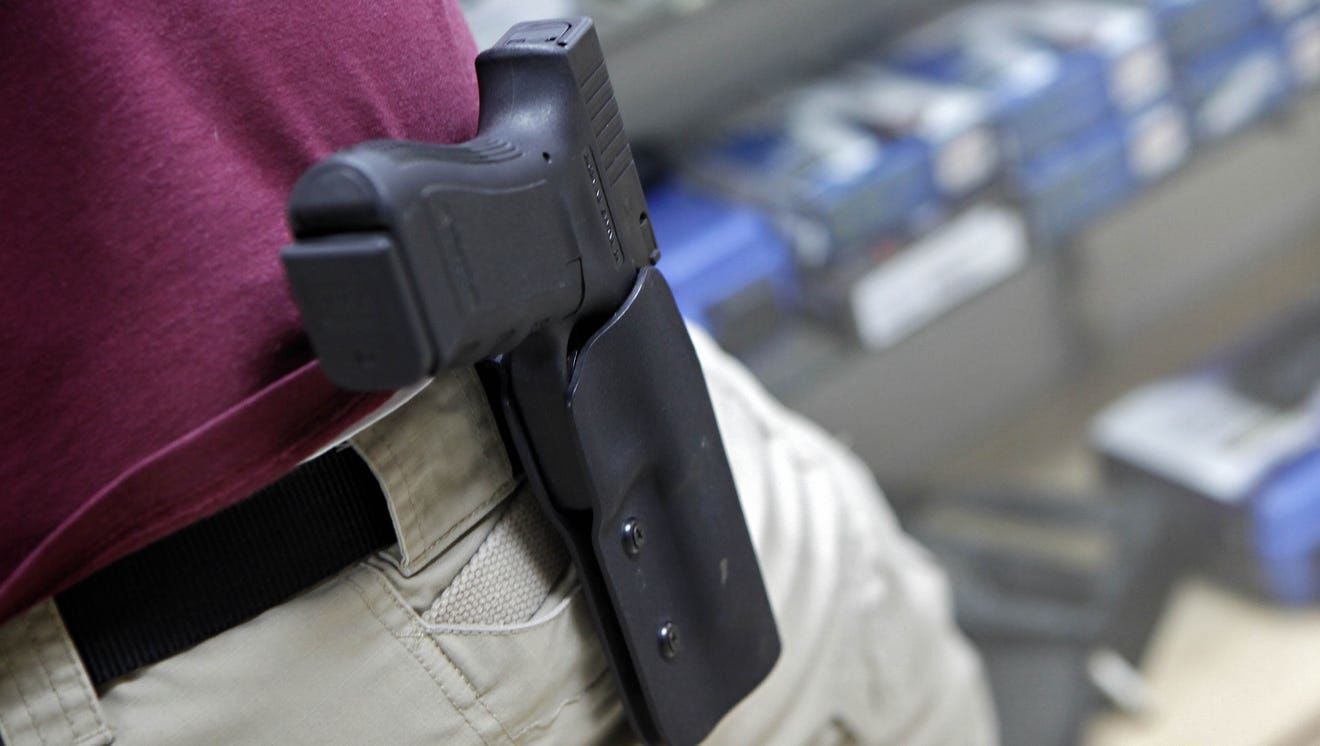 This file photo shows a holstered .45-caliber handgun. A law that recently took effect allows adults to carry a handgun in Tennessee without a permit. Law enforcement officials and firearms instructors say it’s still important for people to be educated on how to safely carry firearms and to know the laws governing them.

Taking a gun safety course is recommended for everyone who carries a weapon in Tennessee by law enforcement and firearms instructors.

This file photo shows a holstered .45-caliber handgun. A law that recently took effect allows adults to carry a handgun in Tennessee without a permit. Law enforcement officials and firearms instructors say it’s still important for people to be educated on how to safely carry firearms and to know the laws governing them.

Taking a gun safety course is recommended for everyone who carries a weapon in Tennessee by law enforcement and firearms instructors.

Legislation allowing adults to carry a handgun without a permit is now law in Tennessee.

Local law enforcement officials say the law won’t keep guns out of the hands of criminals. Their primary aim is ensuring that anyone who carries a gun legally is trained in the use of firearms.

The law went into effect July 1. The new law extends the constitutional carry of a handgun, without a permit, to all law-abiding citizens over the age of 21 living inside Tennessee, along with members of the military ages 18-20. The legislation signed by Gov. Bill Lee also includes increasing penalties for illegal weapons possession.

“They need to be at least familiar with weapons if they are going to carry them around,” business owner and instructor Michael Patrick said.

Since the permitless carry law went into effect on July 1, Patrick said he is actually seeing fewer people signing up for the basic gun safety classes.

“We’ve noticed a big change but it is in the other direction,” he said.

Completing the eight-hour state basic instruction course will give gun owners better familiarity with their firearm, carrying safety information and knowledge of what the permitless law allows and does not allow.

Patrick said some people may not know that a permit is required if they cross state lines with a firearm. Someone driving to North Carolina or Virginia with a handgun could be breaking the law without an enhanced carry permit, Patrick said.

“I don’t think people are thinking it through as close as we are to Asheville (North Carolina) and Bristol (Virginia),” Patrick said.

He said that many states have reciprocity laws, but a Tennessee carry permit, issued after completion of the eight-hour course, is still needed.

“It would be easy to break the law without thinking about it,” Patrick said.

The permitless carry law also contains stipulations for certain types of weapons. The eight-hour course includes four hours of classroom instruction and four hours on the shooting range at the Greene County Range & Firearms Sports Complex. The cost is $70.

It’s important to have knowledge about how to handle the weapon being carried, Patrick said.

“We work with people of all skill levels in the classes,” he said. “We have had people in the classes who don’t know how to use the sights on top of the weapon. Obviously, they should be trained.”

Upon completion of the class, a carry permit is issued.

The next basic Tennessee Enhanced Handgun Permit class is scheduled for Aug. 14.

For more information on gun safety courses, go to tncarrypermits.com.

State Rep. Jeremy Faison, R-Cosby, who represents a section of Greene County, was one of the House co-sponsors of the bill.

“Gun violence is a problem and for anyone to not acknowledge the problem, they aren’t paying attention. Since the very first time I ran, I have openly supported the Second Amendment and pushed for the freedoms it offers to us as American citizens,” Faison said in a recent email. “And yes, I do believe that a armed society is a safer society.”

Faison cited figures that show “roughly 330 million Americans and only 700,000 law enforcement officers (which) leaves us around one cop for every 475 Americans.”

Hawk said the law “clearly states that criminals cannot posses a firearm in Tennessee, as this legislation increases time in prison for those who steal a firearm or who illegally possess a firearm.”

Background checks are still mandatory in order to purchase a gun.

“Tennessee’s handgun carry permit system is still intact, which is very important for those Tennesseans who wish to be able to carry their firearms across state lines, and in order for them to be recognized and legally carry a firearm in other states,” Hawk said.

“Gun training courses and shooting practices at firing ranges in Greene County are also strongly suggested and encouraged for all gun owners,” he added.

“All in all, this legislation moves Tennessee further along in being a state that strongly supports the Second Amendment to our U.S. Constitution,” Hawk said.

The law is part of what Lee calls his “public safety agenda.”

Handgun carry is allowed in any location, unless otherwise posted or prohibited by law or where a permit is required.

All handguns are prohibited in:

Also, individuals under the influence of alcohol or drugs and those consuming alcohol in businesses authorized to serve are prohibited from carrying handguns.

Handgun carry with a permit only is allowed:

An individual carrying in a permit-only location must present a permit to verify validity or be subject to a violation.

An armed party alone is no basis to initiate a Terry Stop. A Terry Stop is another name for a stop-and-frisk stop.

An armed party is under no obligation to identify themselves. An officer can ask the armed party to do so.