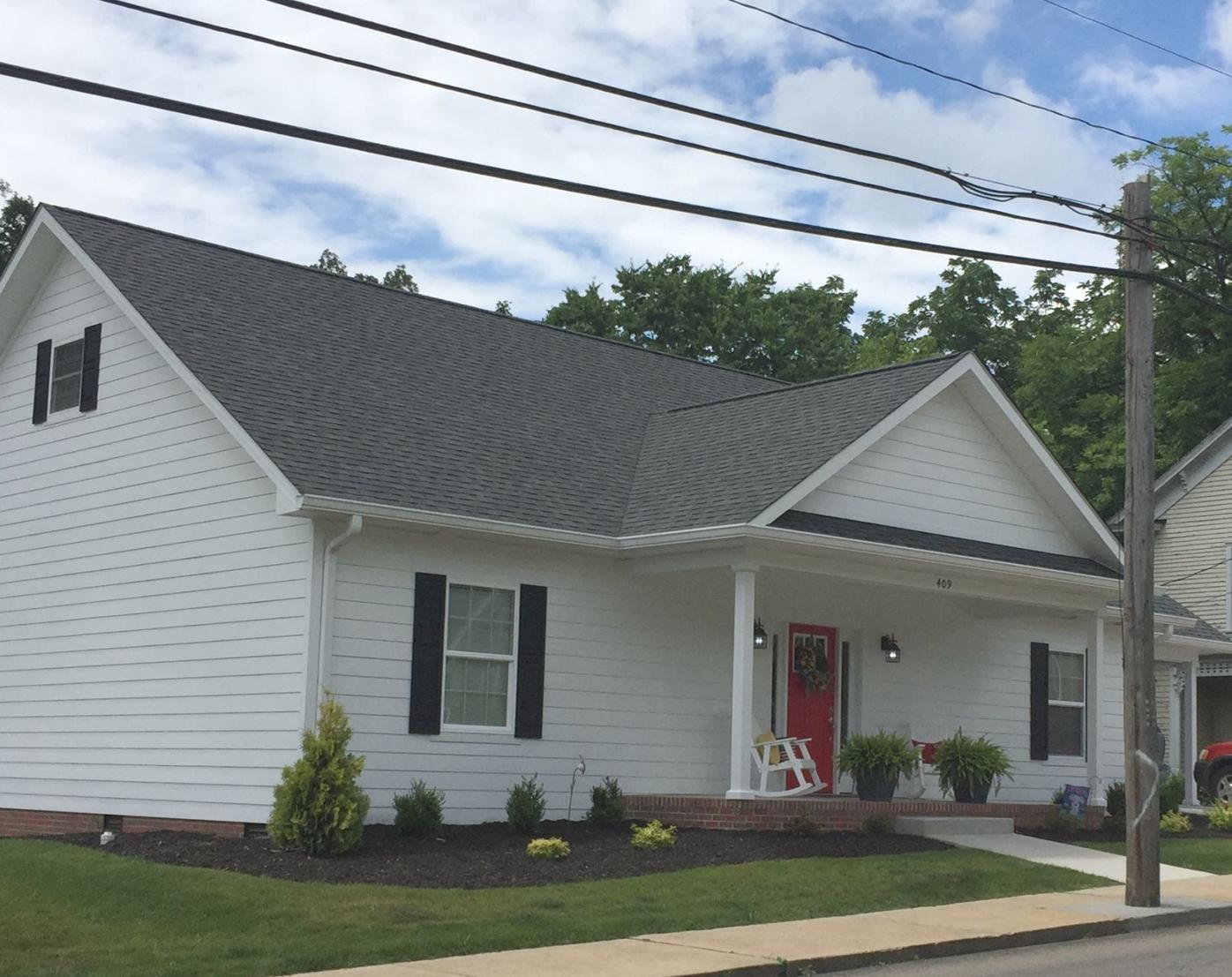 The Greeneville Isaiah 117 House has served 73 youngsters awaiting placement into foster homes since it opened in late November of 2019. 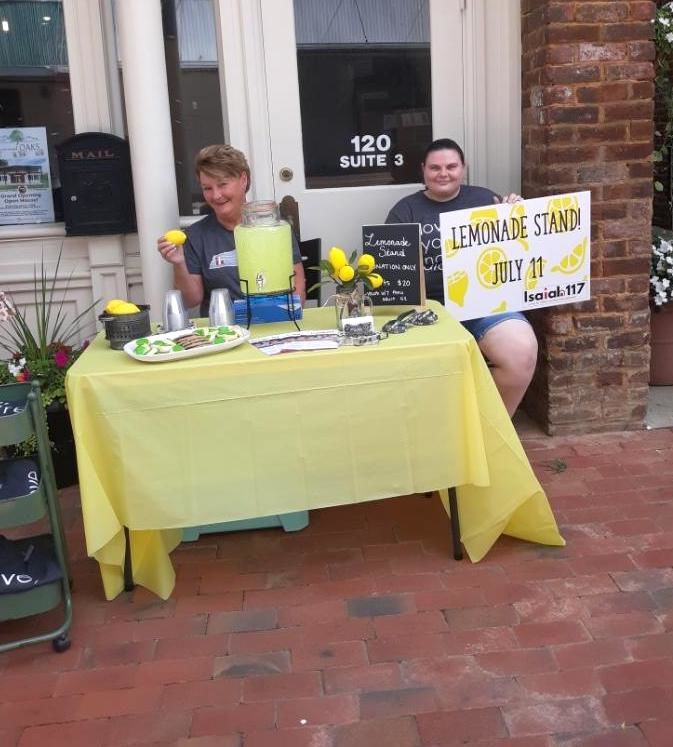 This lemonade stand outside of Brolin & Bailey boutique on Depot Street was one of 14 set up last weekend to benefit the Isaiah 117 House. The stands raised more than $7,000 for the Greeneville house, which marked the one-year anniversary of its groundbreaking Friday.

The Greeneville Isaiah 117 House has served 73 youngsters awaiting placement into foster homes since it opened in late November of 2019.

This lemonade stand outside of Brolin & Bailey boutique on Depot Street was one of 14 set up last weekend to benefit the Isaiah 117 House. The stands raised more than $7,000 for the Greeneville house, which marked the one-year anniversary of its groundbreaking Friday.

One year ago, Tennessee Gov. Bill Lee came to to town to help celebrate the groundbreaking for the Isaiah 117 House in Greeneville.

One hundred days later, the house was finished, opening the day after Thanksgiving to provide a comfortable, safe place for children to stay while awaiting placement into foster care after being removed from an unsafe or unhealthy home situation.

Since that opening in November, 73 children have been served by the volunteers in the local Isaiah 117 House, according to Gwyn Southerland, program coordinator for the Greene County house.

“Each of the children have a story,” she said. “Each one has been so sweet and thankful. It has been a blessing to help them on the worst day of their life and then see them leave with a smile on their face. We love on them. We are the hands and feet of Jesus in this. It is amazing.”

The impact of the Isaiah 117 House has been felt by state agencies and in the court system.

Francesca Ruble with the Tennessee Department of Children’s Services (DCS) said the Isaiah 117 House “helps us immensely. It can be traumatic to a child to be removed from their home. The Isaiah 117 House provides somewhere for the children to go where they will be fed and taken care of while we do the paperwork to place them in a foster home.”

“It was nice to see the community come together and support the Isaiah 117 House to provide this needed service,” she continued. “I am not sure how we did without it.”

Local attorney D.J. Dalton serves as a guardian ad litem in Juvenile Court for children in foster care and has had more than a dozen of those children served by the Isaiah 117 House.

“My clients absolutely enjoyed the experience and really felt safe and well taken care of by Gwyn and her staff of volunteers,” she said, adding that the house has been a godsend for children who need a safe place to stay while a placement is found for them.

General Sessions Judge Ken Bailey has been involved with the project locally since he was one of the first people to learn about the organization.

“The house has been an incredible asset to the community and has made an impact that I could have never imagined,” Bailey said. “Everyone involved in the Juvenile Court system here in Greene County — from DCS caseworkers, attorneys who represent kids in foster care, CASA (Court-Appointed Special Advocate) volunteers, school administrators and teachers, to most importantly the kids — would all tell you that the House is making a difference and doing what we hoped it would. It is changing the story for kids on that very first day of foster care.”

The strong community support that made it possible for the house to open quickly has continued, Southerland said, with one recent example, a lemonade stand fundraiser last weekend that raised more than $7,000.

In addition to providing a safe place for a child to stay while awaiting placement, Ruble said the Isaiah 117 House helps the children have a better start in foster care.

“A lot of the time when we remove children from a home, they have nothing,” she said. “The Isaiah House makes sure they have three to four days of clothes and gives them hygiene items.”

DCS caseworkers are also able to call the Isaiah 117 House when they encounter a situation in which a family may need such items as clothing or bedding for the children that can help keep the children in the home, Ruble said.

The house also provides a neutral place for a foster parent to come and get acquainted with a child so they are familiar with each other once the transition is made, she said. This is much better for the child than meeting the foster parent for the first time after waiting at the DCS office for paperwork to be completed, Ruble added.

The volunteers at the Isaiah 117 House also make the DCS workers feel welcome and have given them small gifts as expressions of appreciation, Ruble continued.

Judge Bailey said he has heard from caseworkers who have told him that it is beneficial to have volunteers at the house when they arrive with children who take care of the youngster’s needs.

The caseworkers have also told the judge about “how nice it is to be handed a cup of coffee at 2 in the morning by a volunteer who is wanting to help the caseworker catch a breath.”

While there are many stories to be told about children served at the house, one of the neatest ones is about three children who arrived at the Isaiah House around midnight one night and made it to school the next morning, Bailey said.

“That simply doesn’t happen at an emergency foster home placement, because typically it may be out of the area or because the kids were up all night trying to adjust to the placement or they don’t have any clean clothes to wear to school the next day,” he said.

In court, the judge said he has had children tell him that they “want to live in that Isaiah House.”

Another benefit of the Isaiah 117 House is the increased community awareness about the foster care system and the children in that system, Bailey said.

“The 85 volunteers are able to see and hear the pain and trauma the children have experienced and are in the midst of while at the house,” he said. “I have had so many people come up to me since we started seeking support for the Isaiah House almost two years ago and say ‘I had no idea about the number of kids in foster care or the conditions many of the kids were living in.’

“In a nutshell, the children of Greene County who are entering the foster care system and who go to the Isaiah House are having an entirely different experience now than they did before the house,” Bailey continued. “They are able to see that the community cares about them and sees them. They know this by the acts of kindness and love they received from the volunteers who are at the house to getting to see the outpouring of support from the community in the form of the many supplies and how nice the house is.”

Bailey and Southerland describe the community support that the Isaiah 117 House has received as tremendous.

That support reaches back to when a group of local people learned about the organization from founder Rhonda Paulson in late 2018. The Carter Countian had started the organization in her home county after she and her husband became foster parents and saw a need for a comfortable, safe place for children to await placement rather than sitting in an office.

After a successful fundraising campaign, the groundbreaking for the Greeneville house on West Main Street took place on July 17 of 2019 with the governor as a special guest. The local house is the first one for that organization that was a new construction. The first ones were established in homes renovated to accommodate Isaiah 117’s mission and purpose.

Three contractors worked together to coordinate the construction of the house — Idell Construction, Lynn Pitt Construction and Seaton Contracting. Changes on the site were rapid as the house was completed in 100 days.

Greene County has been extremely supportive of the Isaiah House and continues to do so, whether it is churches, organizations, businesses or individuals, Southerland said.

Each month’s newsletter about the Isaiah House includes a list of needs, and there is always a strong response, she said.

The support of the community for the Isaiah 117 House was evident last weekend with the lemonade stand fundraiser. Individuals, churches, organizations and businesses operated 14 lemonade stands on July 11 that raised close to $7,000, Southerland said.

“It was great, a real outpouring of love,” she said.

There are three Isaiah 117 Houses in Tennessee with the third in Washington County. Two are under construction — one scheduled to be finished next month in Sullivan County and another in Blount County. Efforts have begin to establish Isaiah 117 Houses in 14 other counties in the state.

Isaiah 117 House has also spread to Indiana with one house undergoing renovations in Vanderbough County and efforts begun to establish another home in Knox County.