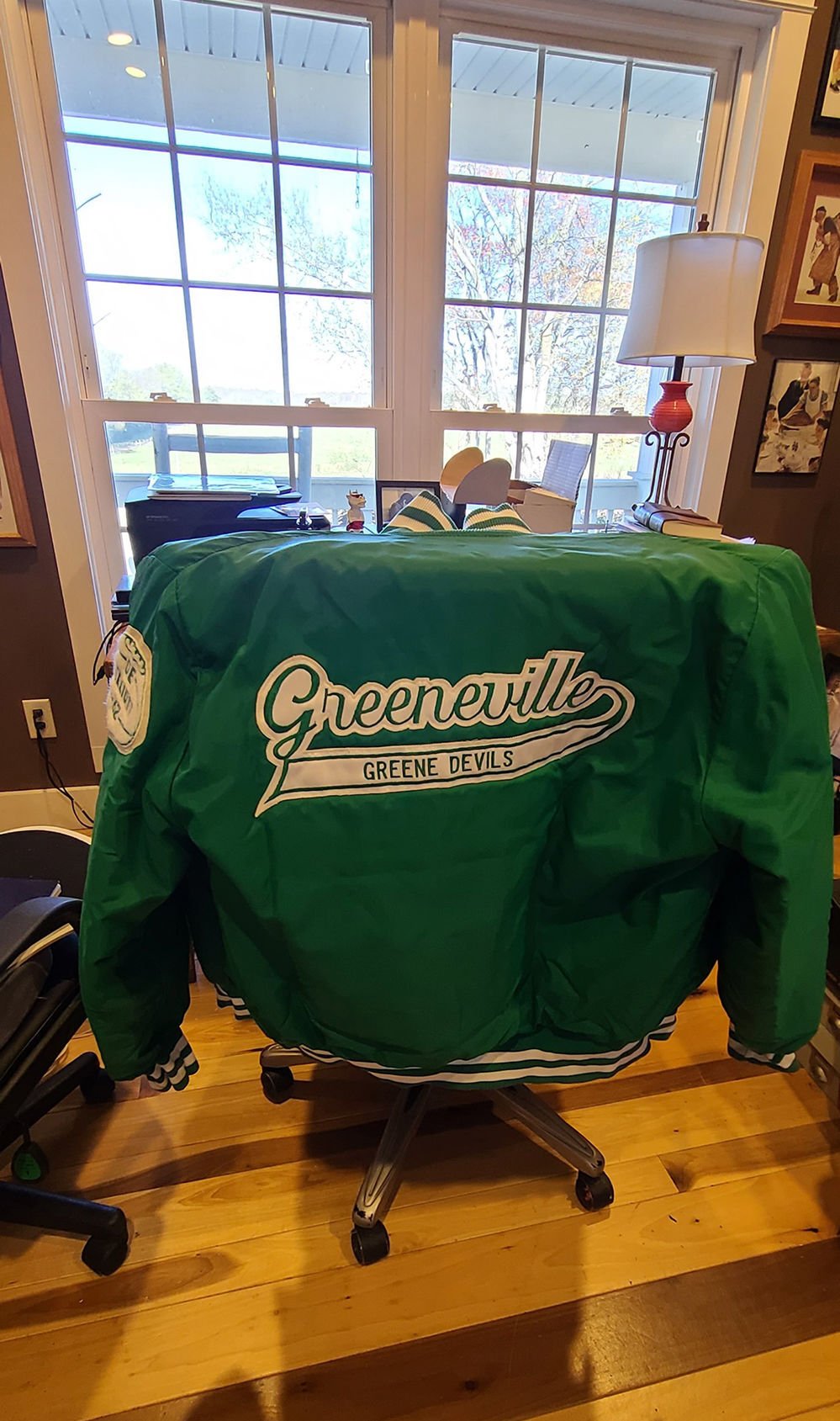 A Greeneville High School letterman’s jacket from the 1980s hangs on the back of a chair in the home office of former GHS football player Jim Elliott, who loaned the jacket to a shivering girl in the 1980s and recently had it returned to him by that girl’s daughter. 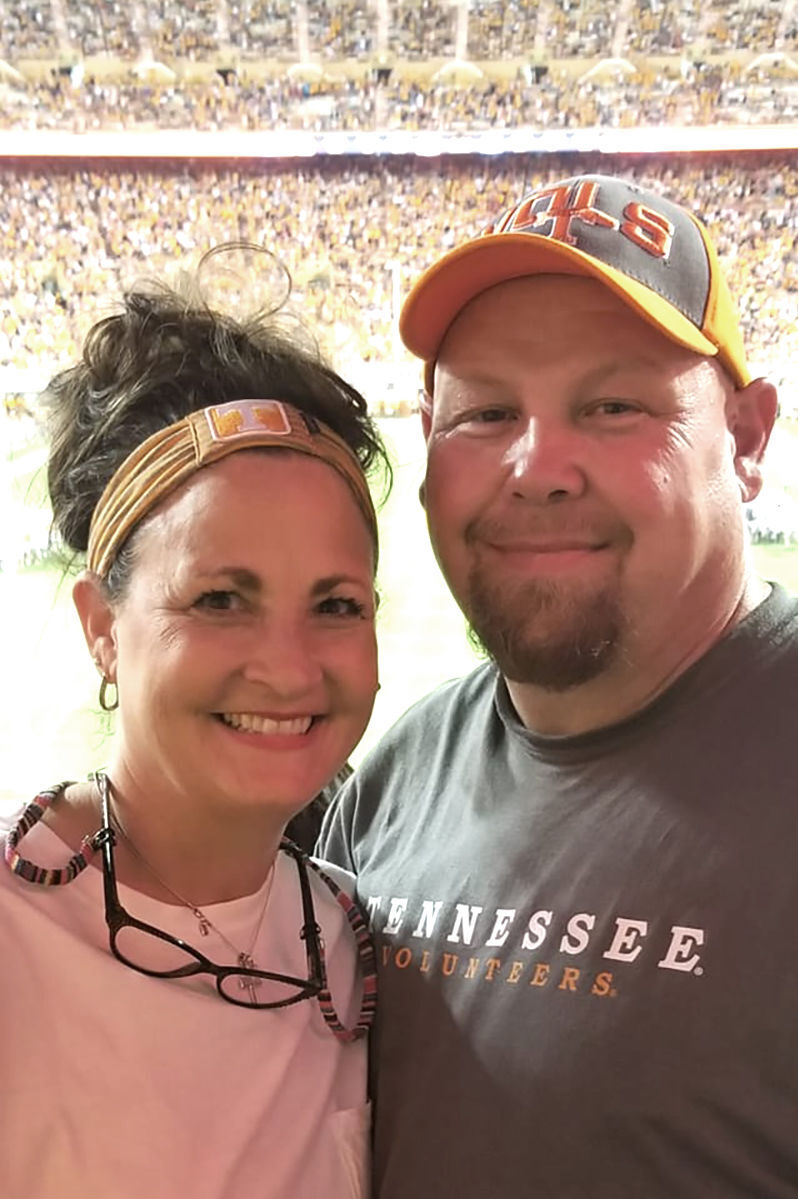 A Greeneville High School letterman’s jacket from the 1980s hangs on the back of a chair in the home office of former GHS football player Jim Elliott, who loaned the jacket to a shivering girl in the 1980s and recently had it returned to him by that girl’s daughter.

When a Greeneville High School student athlete shared, via social media, an old memory from high school days, former classmates encouraged him to spread his story more widely, including sharing it with The Greeneville Sun for possible publication.

When he provided that story to us, it was clear why Jim Elliott’s former classmates wanted him to share it. It’s a story with heart.

When Jim Elliott was at GHS as a member of the class of 1985, one of his most rewarding student activities was playing on the Greene Devil football team. He was an achiever on the field, proudly recalling the game against Morristown East High School in which he recovered five fumbles, all in one game. That set a school record for fumble recoveries that held for years.

Like most young men in high school, he was keenly aware of the young women around him, some catching his attention more than others.

One girl that appealed to him happened to have a cashier job in a local grocery store. Jim liked her and had hopes she might like him in turn. Her name was Sonya. Since Jim worked during that same time stocking Pepsi products in Greeneville stores, including the one in which Sonya worked, he sometimes would see her at her cash register station.

One very cold day, when Sonya was working in an area that exposed her to cold drafts whenever the store’s outer doors opened, Jim noticed she was shivering. He was wearing his GHS letterman jacket, and in gentlemanly fashion slipped it off and draped it over Sonya’s shoulders, telling her to keep it with her. He’d get it back later.

Jim and Sonya ended up dating for a few months. Then, one day, she told him she wasn’t going to be around Greeneville much longer, and …

But let’s let Jim tell the story himself … starting here:

Few things qualify more as high school memorabilia than a letter jacket. If there is one thing that is synonymous with school pride, it’s the letter jacket. We wore them proudly and we wore them out, only for them to find their way into closets or trunks after our school days were done. They become just memories as those days fade into the furthest recesses of our youthful minds.

Years later, we may drag them out of their confines and display them proudly for all to see. We share a few laughs, but as our older eyes gaze upon the letterman jackets, we can’t help but reminisce, as we return them back to their resting places.

The year was 1984, my junior year in high school. I earned the right to obtain and wear the letter jacket, becoming a member of a society of fellow lettermen. The following year was the beginning of the end of my school days. As I rushed to make memories with my friends and fellow lettermen, I quickly realized that there weren’t enough days left to hold all the memories I had in mind. I cherish the ones that have made the biggest impact and struggle in realizing the ones that could have been.

My letter jacket and I parted ways, after my senior year. I remember that day well and have looked back on it often.

It was a cold winter day and I took my jacket off and placed it around a shivering young lady, in a chivalrous manner, I assure you. It was our connection and has become our connection all these years later.

We dated for a short time, then she and her family moved away. As we said our goodbyes, she offered me back my jacket. I told her to keep it and that I would get it back when I came to visit her in her new location.

That was the last day I saw my letter jacket, because I failed to live up to my promise to visit.

The years have piled up since then, and so have the memories. A few days ago, I received a message, along with a picture. The message was from that young shivering girl’s daughter, some 35 years later. As they were boxing things up and readying for a move, my letter jacket resurfaced. A simple search on social media had found me in mere seconds.

When the package arrived, I opened it and removed the jacket from the box. I slipped one arm in, then the other, and a smile found its way onto my face. So here I sit, reunited with my letter jacket and able to share this memory with you, my friends. My hope is that we always cherish those days of old, at GHS and keep them alive in the stories we tell.

Thank you, Sonya Hobbs, for sharing a memory with me, all these years later.

(Jim ends his story with the lyrics of the Greeneville High School alma mater):

Proud as she can be.

We will strive to keep her worthy of our loyalty.

Cherished by her sons and daughters,

Sweet the memories rise ’round our hearts, our Alma Mater,

Lauded to the skies.

Forward ever be our watchword: Conquer and Prevail ...

Hail to thee our Alma Mater, G.H.S. all hail!

I spoke by phone with Jim after reading his brief story, and he told me the jacket came back to him in flawless condition, and he is protectively preserving it for display in his home office. He is grateful not only for the jacket itself and to Sonya for preserving it, but also for the kindness of her daughter in seeking him out and going to the trouble of sending it to him.

In case you’re wondering, yes, I did ask him if the jacket still fit. It does, but it is a little tight. That is unsurprising to him, however, in that he accidentally ordered a size smaller than he should have all the way back in high school, so it was somewhat tight even then.

Also, Sonya isn’t the only one who gained a family after high school. Jim did the same, and now lives in Gracey, Kentucky, a town north of the Nashville area. He runs a limousine service that has him on the road much of the time.

As for Sonya, rumor has it she is retiring and thinking of moving back to her old town of Greeneville. If so, welcome back, Sonya!