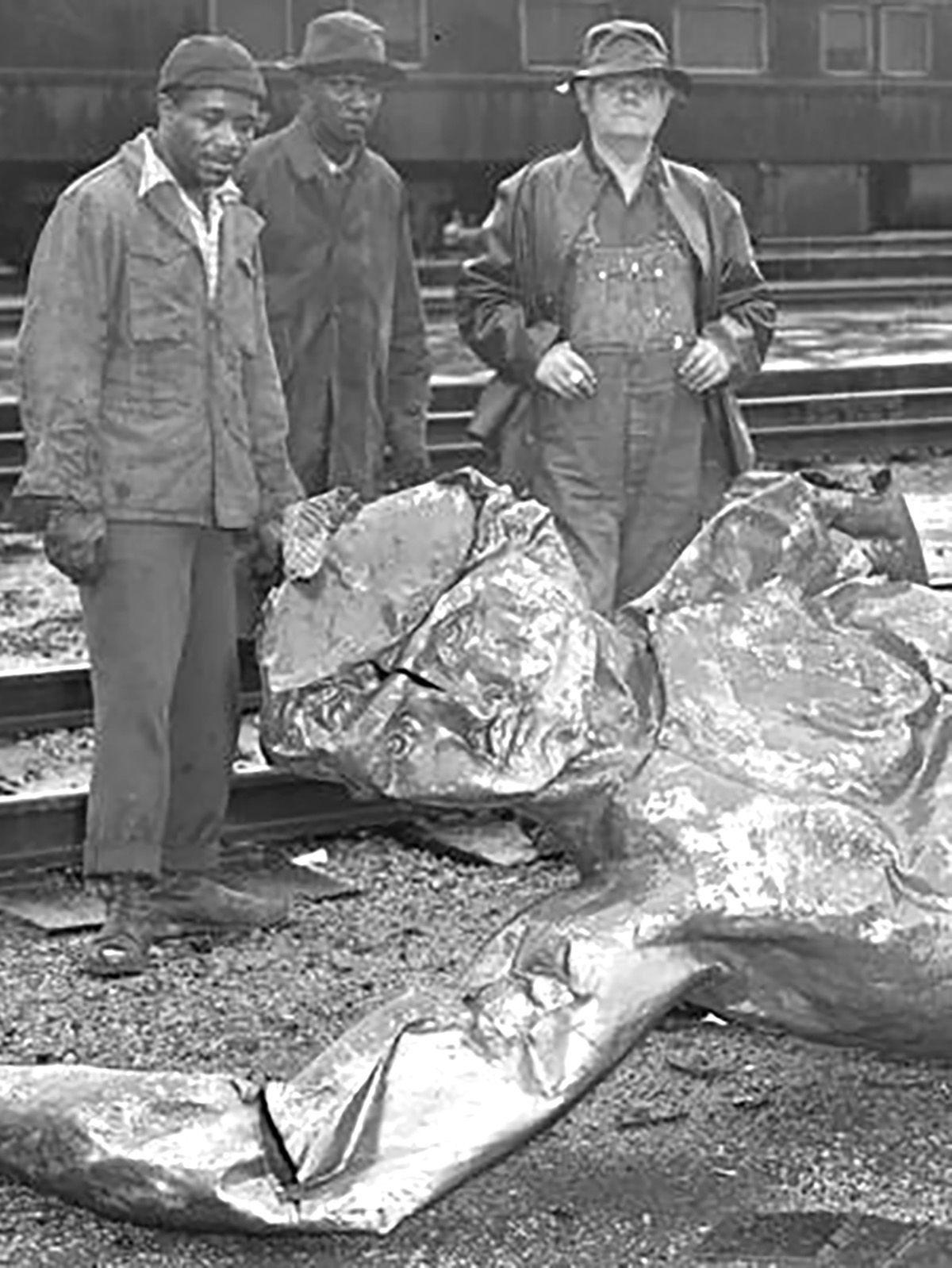 This 1952 photo from the collection of the Nashville Public Library shows a statue of the Roman god Mercury the day it fell from atop the tower of Union Station. The men with it are workers who carried the ruined statue away from the place it hit the earth to this less trafficked spot on the station property. The statue later was melted down and turned into wall plaques. 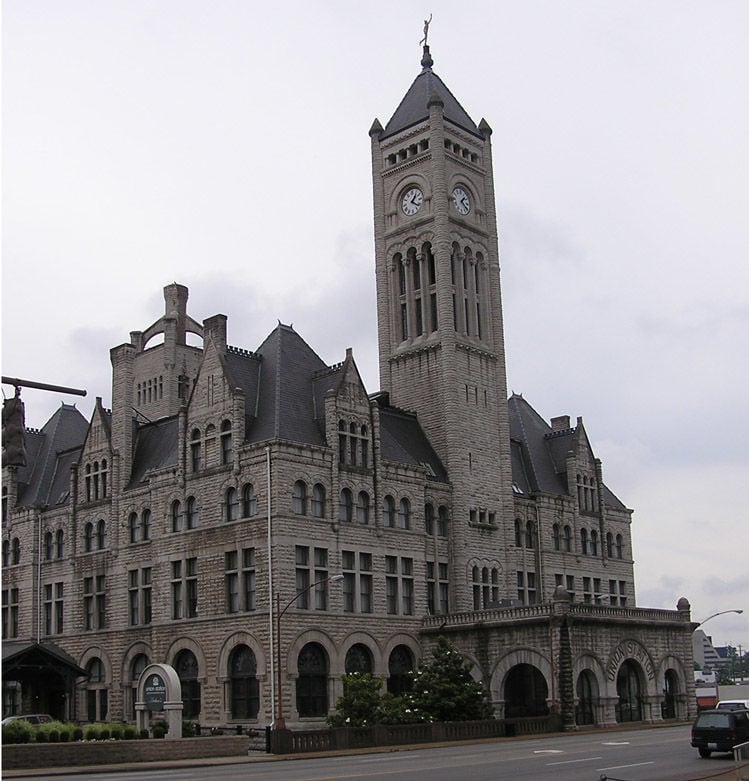 This 2008 public domain photograph of Nashville’s Union Station shows the prominent tower from which a large statue of the Roman diety Mercury fell to the ground in 1952. The less-rounded figure now atop the tower is a replacement, though not a duplicate, of the original.

This 1952 photo from the collection of the Nashville Public Library shows a statue of the Roman god Mercury the day it fell from atop the tower of Union Station. The men with it are workers who carried the ruined statue away from the place it hit the earth to this less trafficked spot on the station property. The statue later was melted down and turned into wall plaques.

This 2008 public domain photograph of Nashville’s Union Station shows the prominent tower from which a large statue of the Roman diety Mercury fell to the ground in 1952. The less-rounded figure now atop the tower is a replacement, though not a duplicate, of the original.

The anniversary of a Tennessee historical event passed Sunday in our state’s capital city, and probably no one noticed.

The event that happened 68 years ago was not particularly significant, but it was unusual and interesting, and created a lasting change at a landmark location. And that event could have generated injuries or fatilities had its timing been slightly different.

March 22, 1952, was the day Mercury plunged in Nashville. It had nothing to do with a sudden cold snap, as Tennessee sometimes experiences in early spring.

Mercury did drop, but not inside thermometers. The plunge was from atop the tall tower of Nashville’s famous Union Station, a large train station on the Louisville & Nashville rail line. And the Mercury that fell was not the gleaming metal that is molten at room temperature, but a statue of Mercury the Roman god, associated in mythology with financial gain, commerce, eloquence, travelers, boundaries, luck, trickery and thievery, among other things.

The Nashville Banner reported it this way: “The famed statue of Mercury atop the tower on Union Station – a Nashville landmark for decades – crashed to the ground about 10 o’clock this morning. It landed – a mass of crumpled wreckage – in the small open area between the station building and the Broadway Viaduct, east of the Broadway entrance to the waiting room …”

The statue did not fall all the way to the ground unimpeded. It smacked into a lower roof area on the way down and rebounded off to the earth below.

Despite the mid-morning timing of the statue’s fall at a busy train station on the Louisville & Nashville rail line, no one was in the area where the 16-foot-tall statue landed, so no one was hurt.

Workers quickly moved the fallen statue to a spot about 50 yards from where it had landed. It proved to be far lighter than anyone had anticipated, the newspaper report said, with two men easily able to move it.

The statue was hollow, its copper skin only 1/32nd of an inch thick. It did little damage to any other part of the station on its way down, though the statue itself was misshapen.

Examination of the fallen Roman god showed it to have been built around a central pipe only three inches in diameter, and much the worse for age. Union Station had been opened in 1900, so the statue had been subjected to sun, rain, time, shifting temperatures and wind for half a century. High winds during the night before the fall are what broke the aging center support pipe and sent Mercury to the ground.

The statue had been atop the building’s tower since the station’s beginnings, but its history went back to the 1897 Tennessee centennial exposition held at what is now Centennial Park, site of the famous Parthenon reproduction (built for the centennial) that remains a Nashville tourist attraction. The statue stood originally atop the now-gone Commerce Building in the same park.

The centennial celebration actually occurred a little late, Tennessee’s formation as a state dating to 1796. Late or not, the state threw a huge and successful ongoing birthday party for itself, with Mercury there to keep an eye on it all.

A tornado wrecked the Commerce Building sometime after the centennial celebration, but the Mercury statue came through okay, and because the man in charge of the centennial exposition by then also was overseeing construction of Union Station, the Roman diety found a new home high above the railroad tracks as part of the Nashville skyline.

The statue, being well off the ground above Union Station, was not highly visible after dark, however, so eventually spotlights were added. After years of weathering, some touchups were done to the statue’s surface.

Then came that March day in 1952 when Mercury made his dive to the ground.

There was at least one eye-witness to the fall. One Custis L. Stamp reported that he was inside the station, looking out a window, when he saw Mercury “plummet headfirst by the window at 10:10 a.m., Saturday, March 22.” He told a reporter that he immediately turned to another man in the office and said, “There goes Mercury!”

Stamp declared to the Banner reporter that he “always had a fondness for that statue.”

After its suicide-like dive to the ground, the original Mercury statue was too damaged to be repaired effectively, so was melted down and turned into two bronze tablets to be placed at the Tennessee Agriculture Hall of Fame. They remain there now in the Ellington Agricultural Center at 440 Hogan Road, Nashville. One plaque honors a “Lamb and Wool Club,” the other a former University of Tennessee president who “contributed to the control of the southern cattle tick,” among other achievements.

The fallen Union Station Mercury was replaced by a more two-dimensional version, but it too was destroyed by stormy weather in the late 1990s and replaced by a third Mercury, which remains today.

The station building itself has been renovated and is now a noted hotel, the L&N railroad line that Union Station served having ceased operations in 1982.

Next time you are in Nashville and pass Union Station, take a few moments to picture the original Mercury and try to envision its long plummet to the ground so many years ago, and try to figure out how much of Tennessee’s capital municipality would look different to the Mercury of 1952, could he return and gaze again over the city he once guarded.