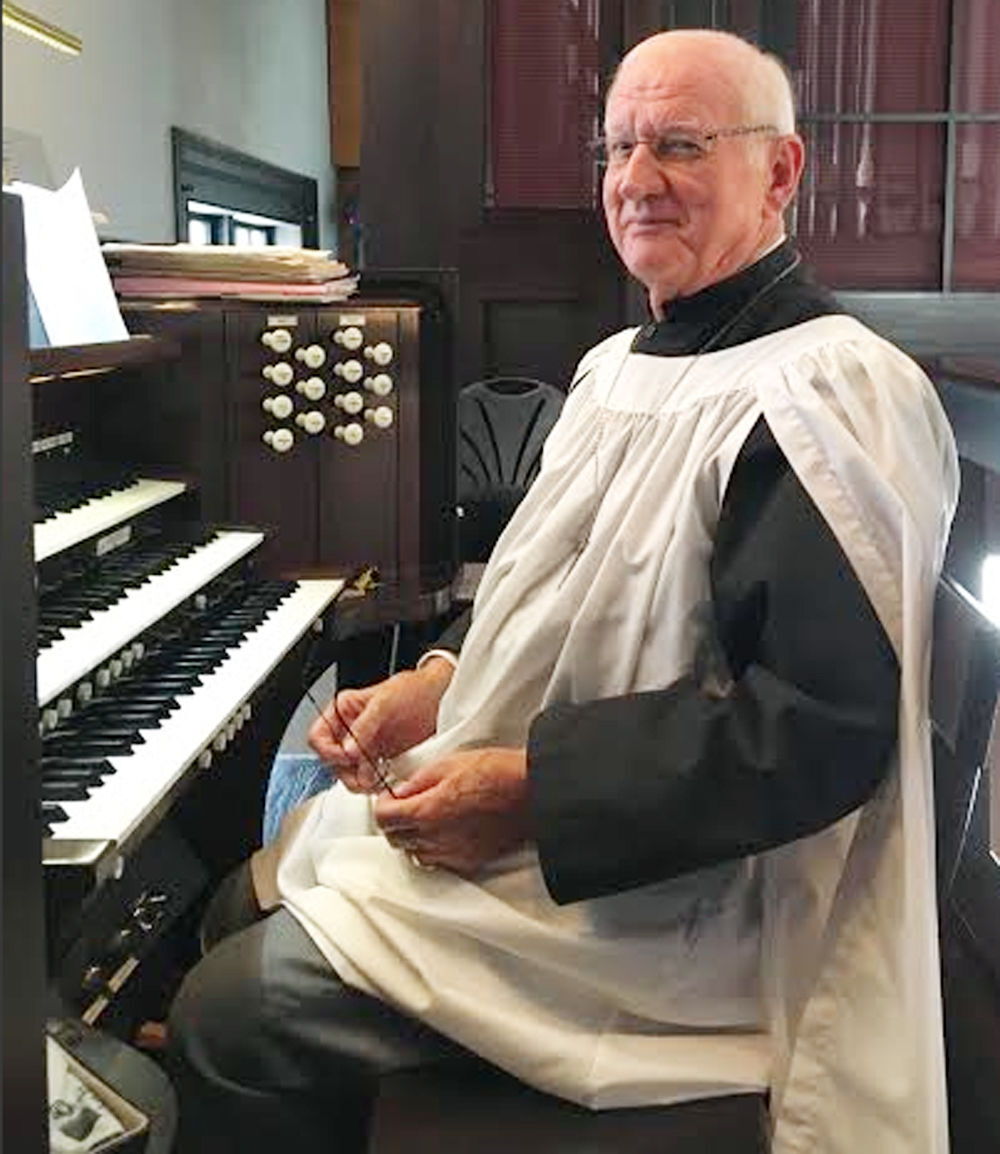 Jim Winfree is shown in a familiar setting: at the keyboard of an organ. He has been the organist for St. James Episcopal Church for more than three decades, and isn’t done yet. 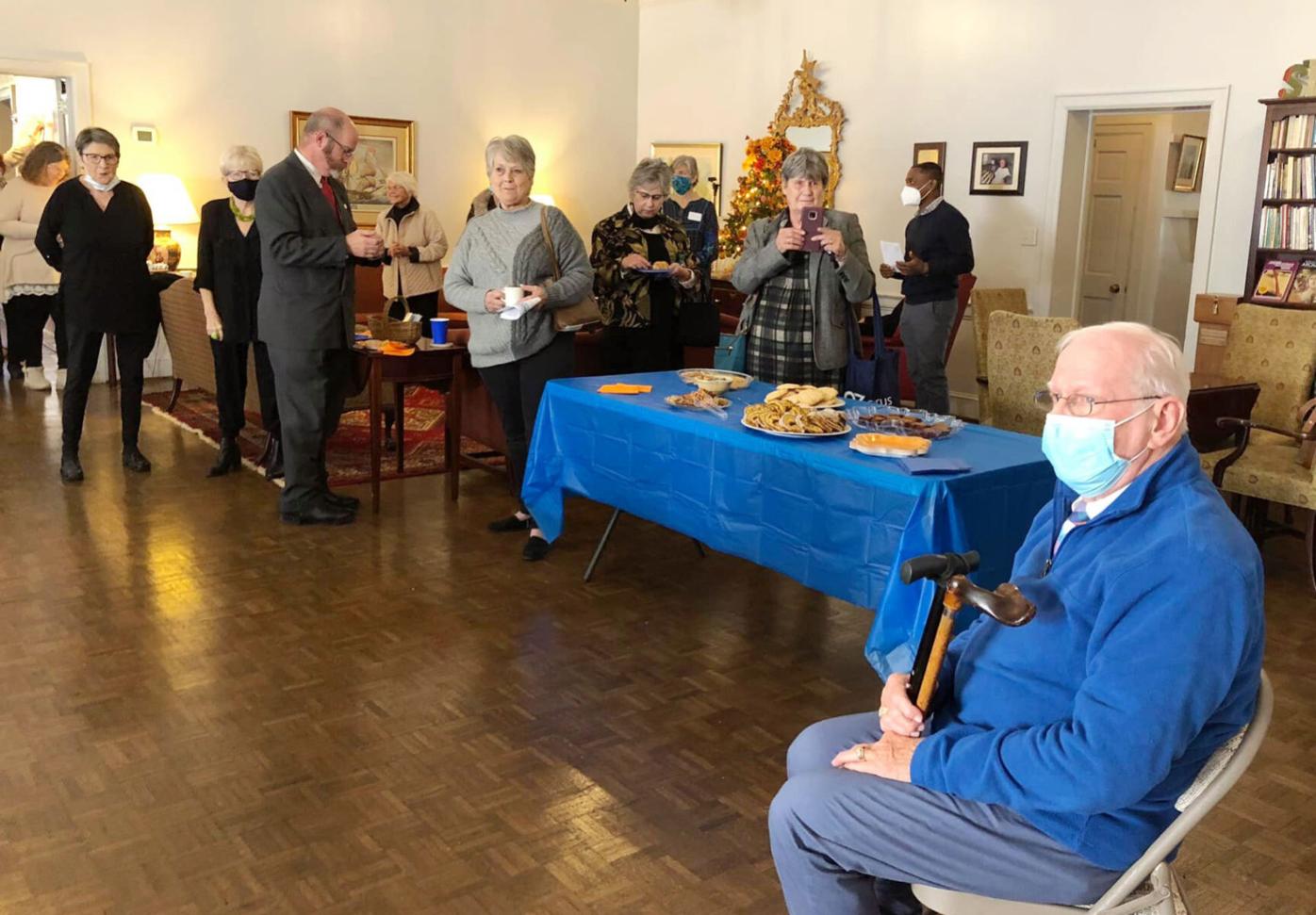 Jim Winfree, seated at right, was surprised by the Nov. 7 reception given in his honor at St. James Episcopal Church, where he has been the church organist and choirmaster for decades.

Jim Winfree is shown in a familiar setting: at the keyboard of an organ. He has been the organist for St. James Episcopal Church for more than three decades, and isn’t done yet.

Jim Winfree, seated at right, was surprised by the Nov. 7 reception given in his honor at St. James Episcopal Church, where he has been the church organist and choirmaster for decades.

Jim Winfree is a man who is, by his own description, seldom at a loss for words. One exception to that occurred Nov. 7 when he walked into Greeneville’s St. James Episcopal Church parish hall and found himself at the midst of a reception in his honor.

The surprise reception was in recognition of his three-and-a-half decades as the organist and choirmaster for that historic downtown place of worship. It was sort of an early, focused Thanksgiving, with Jim being the man for whom the church was giving thanks.

Jim says that when he walked into the reception that day, he “was a little dumbfounded” and didn’t easily find words.

The parishioners putting the reception together had worked hard to make sure Jim didn’t clue in beforehand on what was about to happen. He’d walked into the church the day before and saw several women parishioners decorating tables, but didn’t ask many questions and received only vague answers.

The truth quickly became clear at the reception itself, with its huge “We Appreciate You!” banner on prominent display as everyone greeted his arrival.

Jim and I happen to have been born and raised in the same town, Cookeville. We also are graduates of the same university, Tennessee Tech.

Where I got to know Jim, however, was not in our mutual hometown, but years later at Tusculum University (then Tusculum College). Jim manned the keyboards for years at graduation ceremonies, presidential inaugurations and various special events. I worked as director of communications at Tusculum in the early 2000s, and often was situated not far from Jim during graduation ceremonies.

Speaking with him Tuesday, I learned about how he got into this whole musical thing to begin with, and why he stuck with it.

Given the common elements in our backgrounds, I also was pleased to discover that, even though our Cookeville eras weren’t the same (he was born in 1938 and I was born in 1956), we know or knew many of the same people and places from our Middle Tennessee days.

Jim’s musical life began in a Cookeville elementary school, where a piano-playing music teacher taught youngsters how to read bass cleft and treble cleft, and led them in a “rhythm band.”

The elementary rhythm bands I recall from my own childhood could be more accurately described as “noise ensembles,” but for kids with a natural inclination toward music, those “bands” could be a launching ground for a lifetime in music. Such was true for Jim Winfree, who soon moved on from tambourines and wooden percussion blocks to plunking on the piano to see how the thing worked.

Jim’s initial keyboard efforts were self-taught, though lessons came along in due time as people began to notice he had a good instinct for melodies. Piano eventually led to lessons in playing the organ, his signature instrument today.

His musical ability earned him a music scholarship at Tennessee Tech there in his hometown. He was a faithful collegian, walking to the campus for his daily classes. Jim earned his bachelor’s degree in music education from Tech in 1960. He learned not only piano and organ mastery, but also how to play various woodwinds and brass instruments.

He can sing, too … truly a musician of multiple talents.

Jim was a natural for providing piano or organ accompaniment for various singers at weddings and special events. He also frequently played for church services and revivals. “I’ve played for Baptist revivals, Cumberland Presbyterian revivals, all kinds of revivals and services,” he says.

After college, he became a music teacher for two years for schools in Polk County, Tenn., then came to Greeneville in 1962 to be a music teacher and band director in the city school system. Through the years, he has directed band and choral students and given private instruction in organ, voice and instruments, often at Tusculum College.

In Greeneville, he first became the organist and choirmaster at Reformation Lutheran Church, then began his tenure at St. James Episcopal Church in 1986.

He says he will keep playing at St. James until he or others detect he is not up to the job. If that time comes, he’ll quietly step aside and let someone else take over.

Time has affected his mobility, forcing him now to use two canes when he walks. He has arthritis in his fingers but still can play keyboards. He’s largely quit giving lessons or playing piano because piano keys require more finger pressure when played.

He is a Colleague of the American Guild of Organists. He served as the Knoxville Chapter’s sub-dean, dean and chair of its Scholarship Committee. Tusculum University has recognized Jim’s life and work with a Distinguished Service Award, noting that “his influence on the musicianship of Greeneville citizens runs the spectrum from his work as band instructor, choral director, church musician and keyboard instructor and through his work with Little Theatre productions and Tusculum Community Choral groups.”

He served as music director and accompanist for the Greeneville Little Theater for 25 years and was elected to their Honorary Board of Directors for dedicated service.

Jim played the “Fifth Brandenburg Concerto” in Kingsport and performed the “Mozart Piano Concerto No. 20” with the Knoxville Chamber Orchestra at Tusculum. He was piano soloist for George Gershwin’s “Rhapsody in Blue” with a local band and has performed organ recitals in various cities throughout East Tennessee.

In his church organist capacity, Jim says, he strives above all to keep the emphasis on worship rather than performance, but always strives to play well.

He puts it in a way that succinctly sums up what defines him as the man, musician and teacher he is: “I always try to play to the best of my ability and have always encouraged my students to do that as well.”

He and his wife, Peggy, live on Panoramic View Drive West in Greeneville.