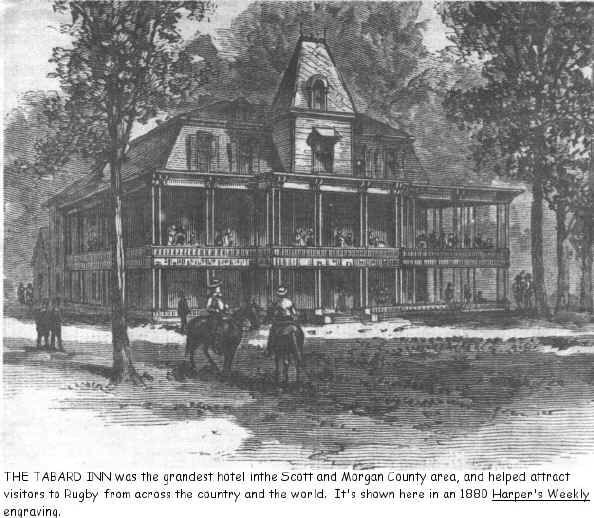 The Tabard Inn, shown here in an old drawing, was an attraction of early Rugby, Tenn., until it burned down a few years after it was built. 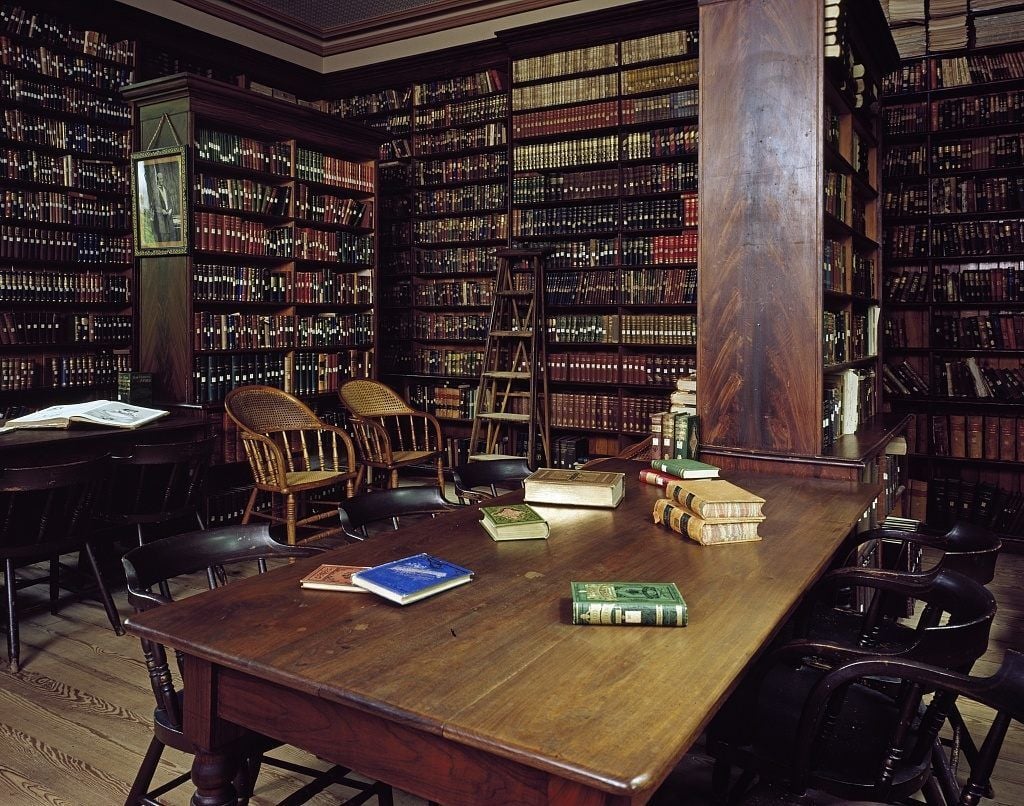 The small, still-operating library in Rugby is packed with old books, many of them first editions. 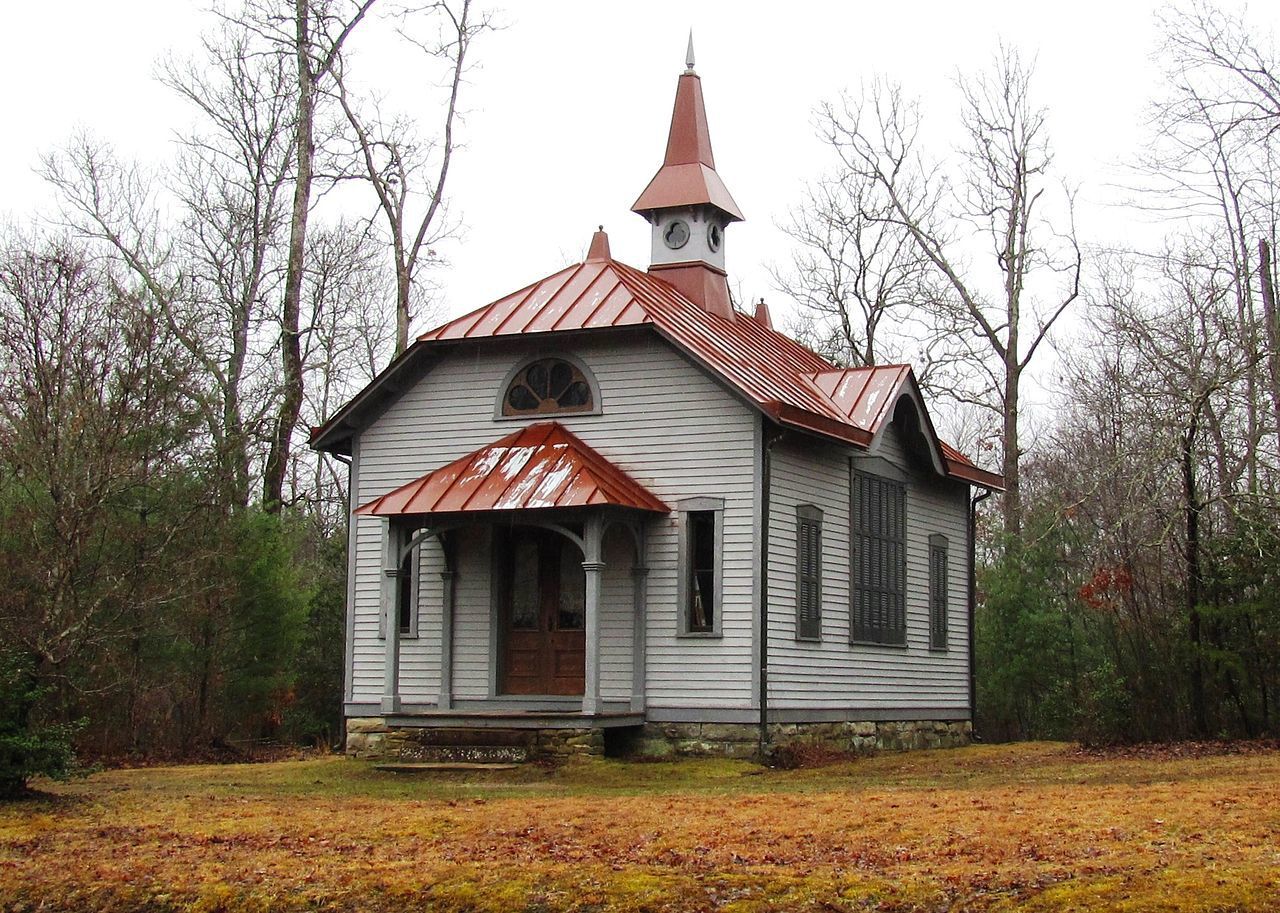 Rugby, Tenn., is filled with quaint old English-style structures, such as the Thomas Hughes Library, built in 1882 and shown here in a photo by Brian Stansberry.

The Tabard Inn, shown here in an old drawing, was an attraction of early Rugby, Tenn., until it burned down a few years after it was built.

The small, still-operating library in Rugby is packed with old books, many of them first editions.

Rugby, Tenn., is filled with quaint old English-style structures, such as the Thomas Hughes Library, built in 1882 and shown here in a photo by Brian Stansberry.

It is quite possibly the most unusual town in Tennessee, at least in terms of origin.

Strictly speaking, it isn’t a town, but an unincorporated community. It is, however, definitely a village. It’s in what is considered East Tennessee, though its county, Morgan County, is on the western end of the East Tennessee region, on the Cumberland Plateau.

If not for an 1870 visit of the town’s British founder to the United States, the village he named Rugby after the old English school he had attended wouldn’t be there. But Thomas Hughes, to Tennessee’s good fortune, did visit America, and while here noticed something that he liked, and which gave him an idea.

Ideas came easily to Hughes, born in the fall of 1822 in what is now Oxfordshire, England. He drew those ideas from his own life experiences and observations. He used his youthful time at Rugby School, which dates back to the 1500s, as inspiration for the short novel “Tom Brown’s Schooldays.”

As an adult, Hughes was a lawyer and member of Parliament, and a social reformer by natural inclination.

Among the things he observed in English life was how the practice of primogeniture hampered English aristocratic males who had the misfortune of not being the firstborn in their families. Primogeniture is defined as “the right, by law or custom, of the firstborn legitimate child to inherit the parent’s entire or main estate in preference to shared inheritance among all or some children, any illegitimate child or any collateral relative.”

In short, if you were the big brother in an English aristocratic family, you were lucky. The family estate and fortune would be yours one day.

If you’re a younger brother, too bad for you. You could enter some distinguished profession or another, but by custom (not strictly by law), the family property probably would never be yours.

In England, this resulted in many a highly educated, well-bred and capable little brother being left more or less adrift, at least in comparison to his eldest brother.

While in the United States, Hughes noticed that second-and-later-born American sons, unlike their English counterparts, found their niches in society with relative ease. Being part of the developing “Christian socialist” movement, he liked that equalizing aspect of American life, and wondering if he could find a way to use it to help the non-firstborn sons of England.

In the words of The Tennessee Encylopedia: “The idea for a new American colony integrated across various social barriers began to take shape in the idealistic English writer’s mind, and in 1879 he became the central public figure in an Anglo-American company made up of a few wealthy Englishmen and a group of Boston capitalists who owned a large tract of land in East Tennessee.

“The Bostonians had acquired the property – 75 thousand acres, with options on another three hundred thousand – as a relocation site for unemployed New Englanders idled by an industrial depression, but improved economic conditions had lessened interest in the venture.

“With Hughes in the forefront, the developers, incorporated as the Board of Aid to Land Ownership, proceeded to make the most of a novel concept: aristocratic young Brits and energetic young Yanks working in harmony to build a model community – and, what’s more, on southern soil. Given the recent Civil War and the long history of conflict between Great Britain and its former colony, the prospects for a symbolic reconciliation and reunion in the new Tennessee village attracted broad public interest.”

Rugby officially became a village in October 1880, with about 100 residents. Buildings went up, such as a big inn named the Tabor (a name borrowed from Chaucer), a picturesque Anglican church, homes, a library … and all at once there was a Victorian English village in, of all places, rural Tennessee (though most of its residents then and later were Americans, not Brits).

Things looked good for Rugby. Again from the Tennessee Encyclopedia: “Almost from the start, Rugby had a look and feel of permanence.”

Circumstances didn’t cooperate, though. With the village population at more than 300 in mid-1881, typhoid came along soon after and killed a few, and scared away far more. The population declined to about 60.

Though the village would grow again to more than 400, other factors stalled development. The Tabard Inn burned down. And some residents from aristocratic backgrounds proved rather inept at farming and making their way in a working man’s world.

Hughes himself was a regular visitor to Rugby for years, and his mother and brother actually moved there. But things just never turned into the utopia Hughes had envisioned. He kept high hopes for Rugby into his last years, but the hopes didn’t pan out.

Rugby lived on as a community, anyway – one blessed with some remarkable and beautiful British-styled architecture. It was and is small and quaint, even if not the big ideal-driven community Hughes and the other developers had hoped.

More than a century later, another idealist set out to give a new kind of life to Rugby. He was literally just a kid, a teenaged boy whose life, sadly, would be short. Young Brian Stagg of Deer Lodge, Tenn., became the driving force behind a group called Rugby Restoration Association (now Historic Rugby, Inc.).

The organization rescued and restored the most historic structures, developed the community, and began promoting Rugby as a unique historical site worth visiting.

I remember seeing the rather frail-looking Stagg on Middle Tennessee television talk shows, talking up Rugby as a tourism site.

My father had read “Tom Brown’s Schooldays” and found Rugby’s story intriguing, so he took our family over for visits to the village a few times. Lots of other Tennesseans (and out-of-staters) did the same. No doubt many reading this have been Rugby visitors. For those who haven’t been there yet, it is a highly recommended weekend trip.

Think about it: how else can you visit an English village without even leaving Tennessee?

And if you are a ghost enthusiast, Rugby has the reputation of being quite haunted. Who knows? If you visit, maybe some of the phantoms will speak to you ... maybe even in an upper-crust Victorian British accent.

Despite its failure to become an American/English utopia, Rugby’s survival and rebirth demonstrate that (again quoting the Tennessee Encyclopedia) “... the long-ago dreams of Thomas Hughes and the more recent visions of the late Brian Stagg have not been in vain.”

And in case you are wondering, the English school named Rugby indeed is the place where the game of the same name got its start.

You can learn about and see more of the town that has been called the “last English colonization effort in America” by visiting historicrugby.org. Or even better, hop behind the wheel and go see the village in person.