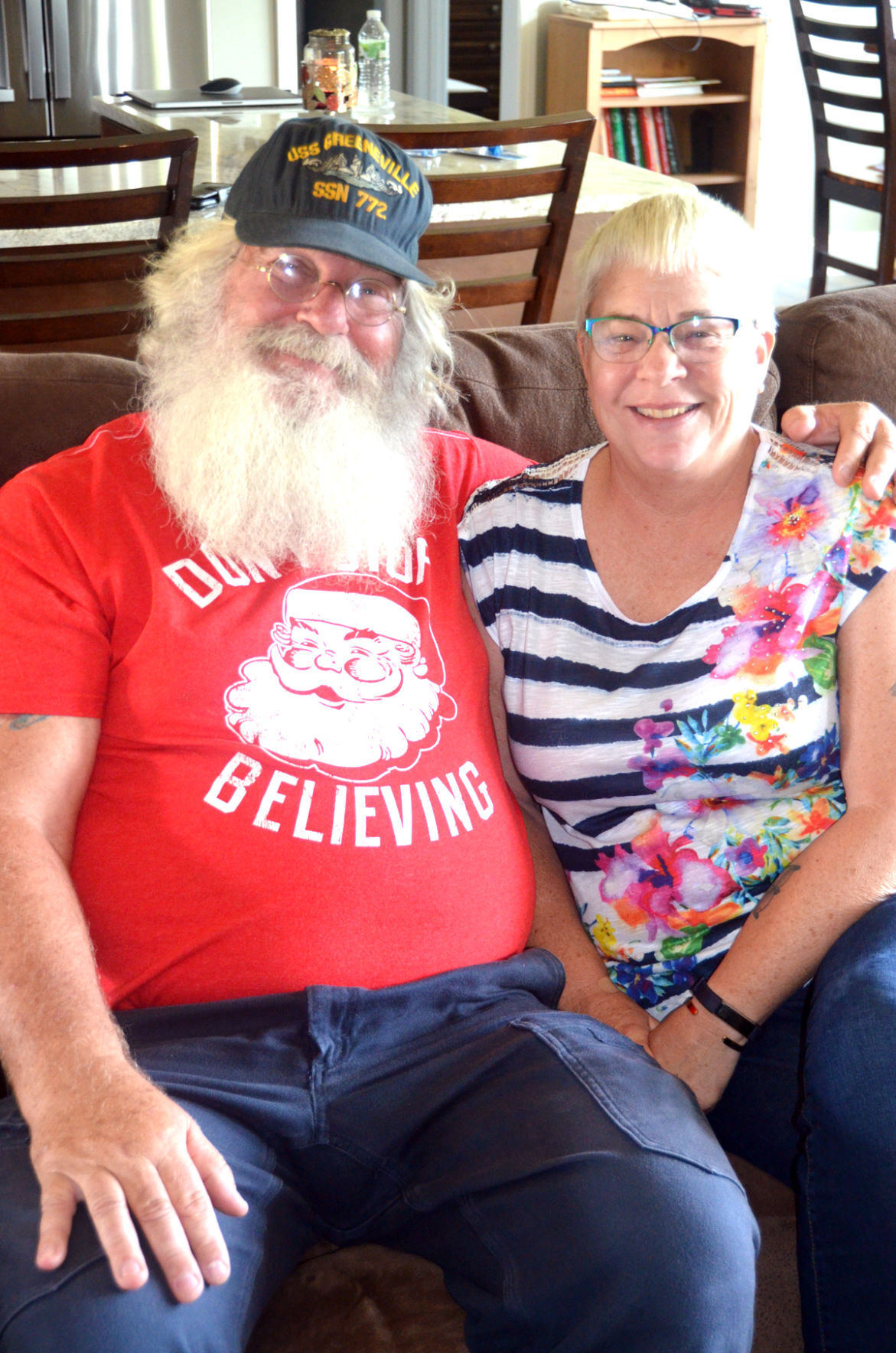 Bob Rediske, in Santa T-shirt and U.S.S. Greeneville cap, poses for a portrait with wife Nancy in their Greene County home on Katie Lane. The beard is 100 percent real. Bob neither affirms nor denies that he is the real Santa. All he’ll tell you is that you never know when or where Santa might show up. 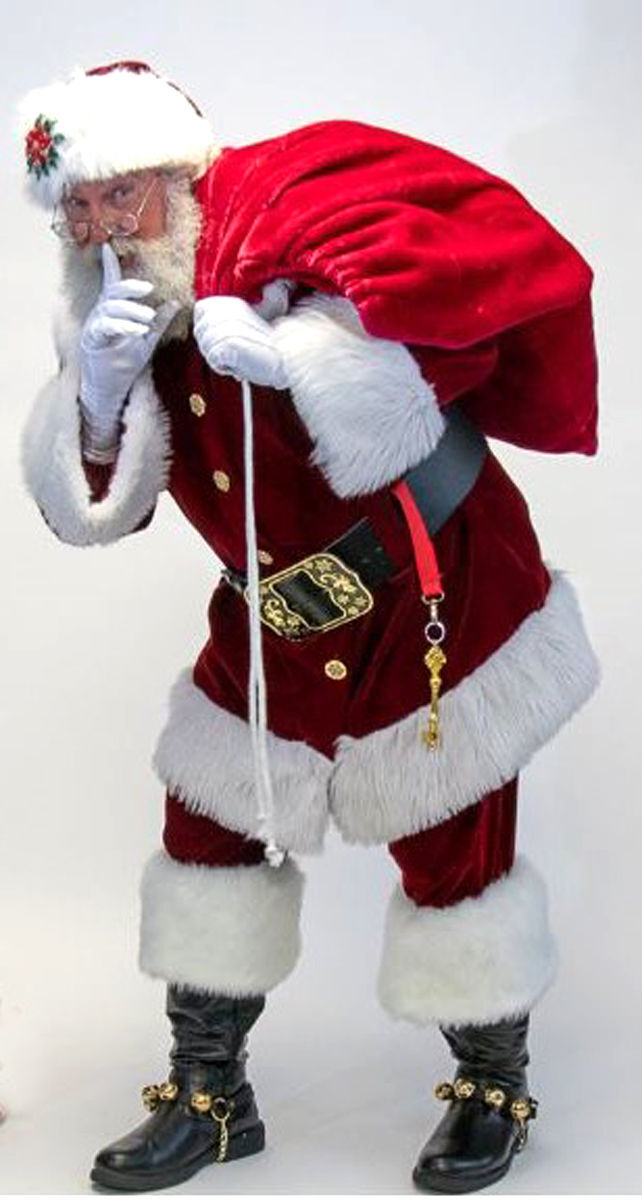 Don’t be surprised if you see this jolly fellow on the streets of Greeneville this year. Santa Claus lives in Chuckey now. In the days Santa used to portray Navy submariner Bob Rediske, he was a member of the original crew of the U.S.S. Greeneville. 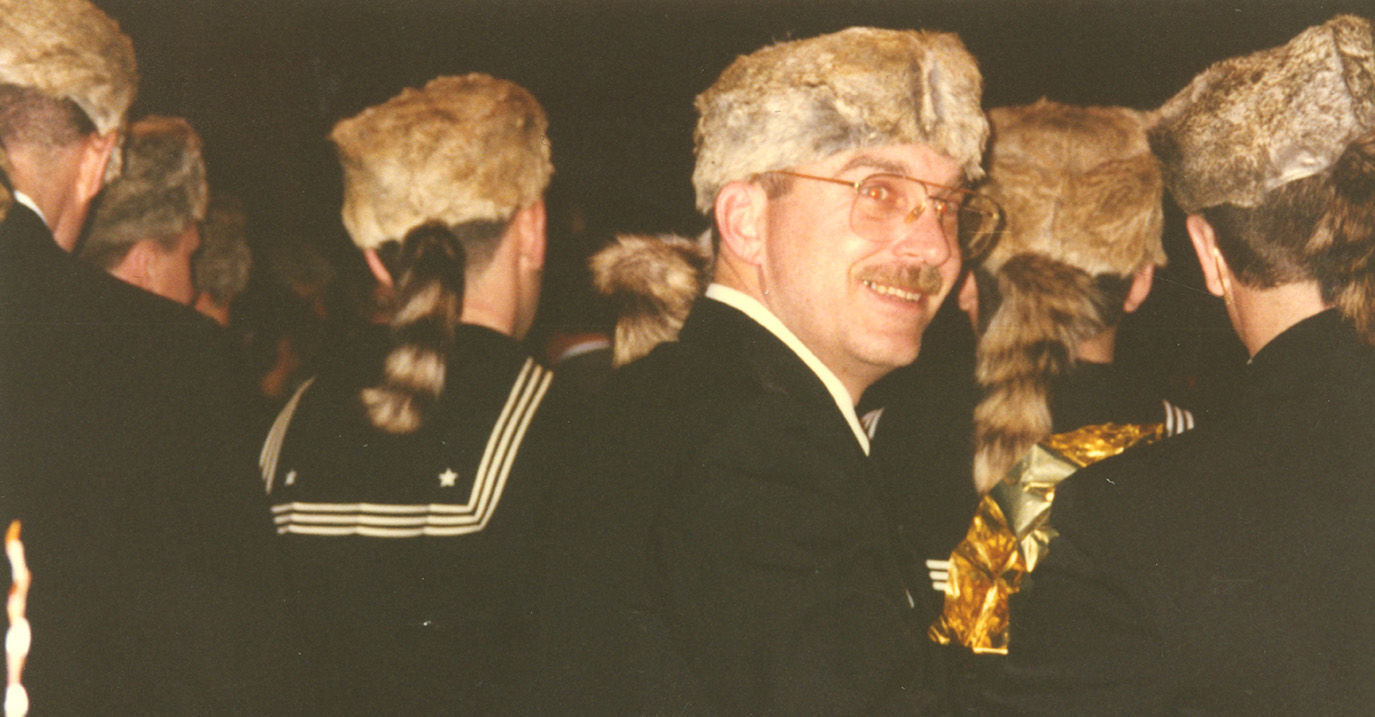 Bob Rediske, center with head turned, wasn’t Santa Claus in the 1990s when he and other crew members of the U.S.S. Greeneville visited Greene County. He and fellow crewmen instead donned coonskin caps in tribute to Greene County’s famous native son, Davy Crockett.

Bob Rediske, in Santa T-shirt and U.S.S. Greeneville cap, poses for a portrait with wife Nancy in their Greene County home on Katie Lane. The beard is 100 percent real. Bob neither affirms nor denies that he is the real Santa. All he’ll tell you is that you never know when or where Santa might show up.

Don’t be surprised if you see this jolly fellow on the streets of Greeneville this year. Santa Claus lives in Chuckey now. In the days Santa used to portray Navy submariner Bob Rediske, he was a member of the original crew of the U.S.S. Greeneville.

Bob Rediske, center with head turned, wasn’t Santa Claus in the 1990s when he and other crew members of the U.S.S. Greeneville visited Greene County. He and fellow crewmen instead donned coonskin caps in tribute to Greene County’s famous native son, Davy Crockett.

It isn’t Christmas yet, but I did talk with Santa Claus on Thursday, right here in Greene County, where he now lives.

Yeah, I thought he lived at the North Pole, too, but he’s here in Greene. He and his missus recently bought a house on Katie Lane and have the place done up nicely. Their back deck affords a gorgeous view of beautiful green hills, meadows and mountains. Quite different from the view at the North Pole.

Okay, I admit it: Bob Rediske isn’t the real Santa Claus … or is he? If he isn’t, he’s the closest thing to him that I’ve ever encountered (including the Santa I used to tell my Christmas wishes to when he visited the Sears & Roebuck in my hometown). And if you ask Bob if he is the real Kringle, he’ll give you the same answer he gives kids who ask him that question when they see him, any time of year: “You never know where Santa’s going to turn up.”

Bob Rediske (pronounced RED-ISKEE) lives in Chuckey rather than Greeneville, but he did live in Greeneville at one time. That Greeneville, though, was the one with the letters U.S.S. in front of its name.

Bob Rediske was not just a U.S.S. Greeneville crewman, but one of the first of them. The U.S.S. Greeneville is a Los Angeles class fast attack submarine named after our own town due to a diligently pursued local effort. Bob was part of its first crew

The contract to build the vessel was awarded to Newport News Shipbuilding and Dry Dock Company, where the now-retired Bob used to work. Though headquartered in Virginia, a branch of that industry used to exist in Greeneville.

“The Greeneville,” as Bob and others associated with the submarine usually abbreviate it informally and conversationally, was commissioned in 1996.

Bob, a 20-year Navy man, was part of the first group of 1990s crew members from the submarine to visit its namesake town. Those visits created an affection for Tennessee and Greeneville on Bob’s part, and that affection, shared also by Nancy, his wife (and high school sweetheart), led them to decide that, one day, they would become residents of Greene County.

Now they’ve done that, moving into their new home only weeks ago. Construction of their house was completed only a day before they closed the purchase.

The first submarine crew visit to Tennessee included not only a Greeneville sojourn, but also trips to other parts of the state, including Nashville. There, the crew members were made honorary Tennesseans by Tennessee’s government. “I was an honorary Tennessean. Now I’m a real one,” Bob noted this week.

Bob’s own hometown is Waverly, Iowa, and when he first saw Greeneville in the 1990s, he was reminded of Waverly, he said, though Greeneville’s population is slightly higher.

Bob had never heard of Greeneville before his Navy years. Now, of course, he knows it in multiple ways, including through his and Nancy’s son, Josh, being the first recipient of Tusculum University’s U.S.S. Greeneville scholarship. Josh went on to complete his accounting degree at Tusculum while it was still known as Tusculum College. He is a professional accountant today.

The Rediskes’ other son is named Matt. Both sons live in Virginia.

Bob, an E7 chief petty officer on the Greeneville who served first as a fire control technician (“fire” as in firing a missile), has traded his Navy uniform for a very different one these days. Bob’s previously dark hair went white over the years and has grown longer, and his beard, also white, has grown as well. And like most of us males, he is prone to be a little heavier than he was in the 1990s.

In short, he has physically transformed into Santa Claus. And no fake beards or sprayed-on hair lightener needed. He looks like Santa all the year through. He’s had the beard for four or five years now, and kids tend to notice him when he’s out in public any time of year, even in regular garb.

He just looks that much like Santa Claus. He feels like Santa, too, because he loves making children smile, and has found youngsters seem to feel comfortable with him when becomes Santa at special events, parties, store openings and so on.

He transforms so thoroughly that even when one of his own two grandsons (there are five granddaughters too), sat on his lap and talked with him, the boy afterward told his parents, “You know, for a few minutes there I forgot that was Granddad and felt like I was talking to the real Santa.”

For Bob, being Santa has brought many smiles and sometimes tears. For him it is impossible not to feel compassion for those children who sit on his lap and tell him their Christmas wish is to be cured of a serious disease or to have their home become happy and whole again.

He has had to learn how to answer such questions, even when they are unanswerable. The key for children, he said, is to give them hope and positivity. He makes no promises of things beyond human power to deliver, but he does remind the children of the good things in their lives, of people who love them, and the things that make them happy.

If he detects from comments or context that a child comes from a family with religious faith, he urges kids to seek comfort and help through that avenue.

One learns how to deal with such things through instinct honed by experience, he said. Helping him out as well is the fact that he has all his life been an “entertainer” to whom children relate. So being Santa is a perfect fit for him for reasons beyond physical similarity to the well-known icon.

Due to COVID, playing Santa during the Christmas season will be different this year. “There’ll be lots of virtual visits this year. There will be some actual visits, but those will have barriers.”

Sadly, the pandemic even precludes him from handing children who approach him the Santa tokens he used to keep at hand year-round.

For those who might want Santa to connect with their own loved youngsters (or oldsters) this year, Bob can be reached via his email address of ThatsSantaClaus@gmail.com, or through his “That’s Santa” page on Facebook.

Santa’s phone number (which he calls a sleigh number) is 757-719-2893. Why the North Pole has a Virginia area code is a question you’ll have to ask Santa.

And if you wonder if you’ll be connecting with the real Santa when Bob comes around, just remember what Bob says: “You never know when or where Santa Claus will show up.”

What about Nancy? Is she Mrs. Claus as well as being Mrs. Rediske?

Any problem with that Santa beard? I asked Nancy.

Her answer was that there’s no real problem beyond the fact that “Santa sheds.” And those white whiskers tend to be visible on most furniture, as you might imagine.

(A footnote: I asked Bob how the present-day U.S.S. Greeneville crew is dealing with the pandemic given that there’s no social distancing in a submarine. The good news is that the U.S.S. Greeneville has been in steady deployment since before the virus made its unwelcome bow onto the world stage, so enough time has passed to show that its active crew members are in the clear.)

Cameron Judd is a lifelong Tennessean born and raised in Cookeville, and a Greene County resident since 1982, when he first joined The Greeneville Sun staff. He also is an extensively published author of western and frontier fiction, having worked with several major publishing houses. He currently works as a feature writer, columnist and advertorial writer with the Sun. He and his wife, Rhonda, live in Chuckey and have three grown children and three grandchildren.