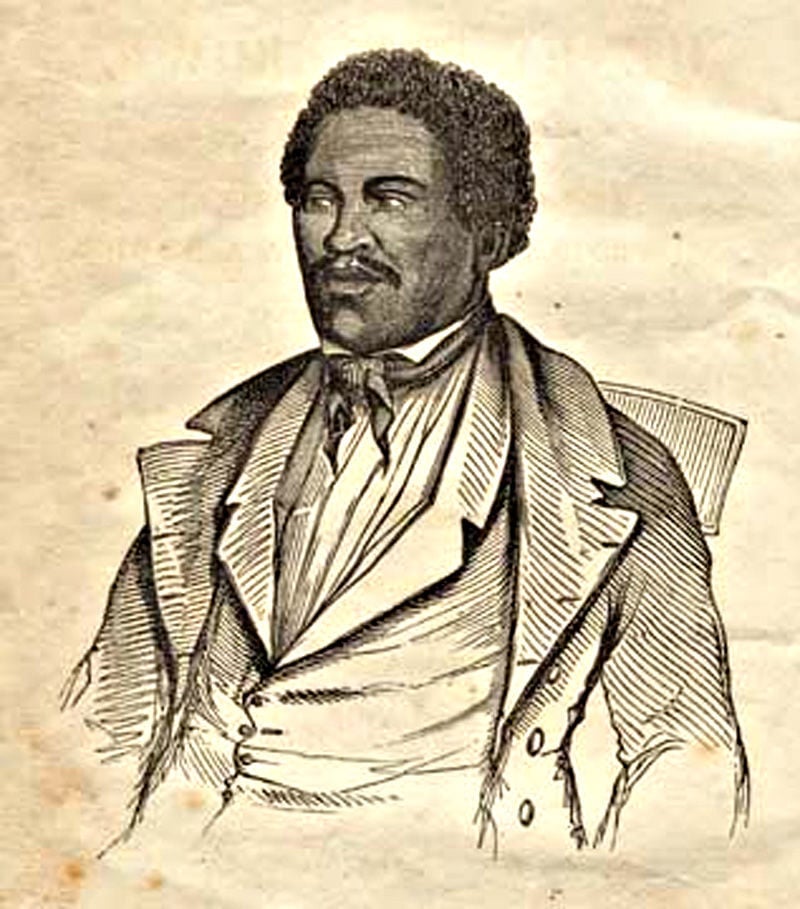 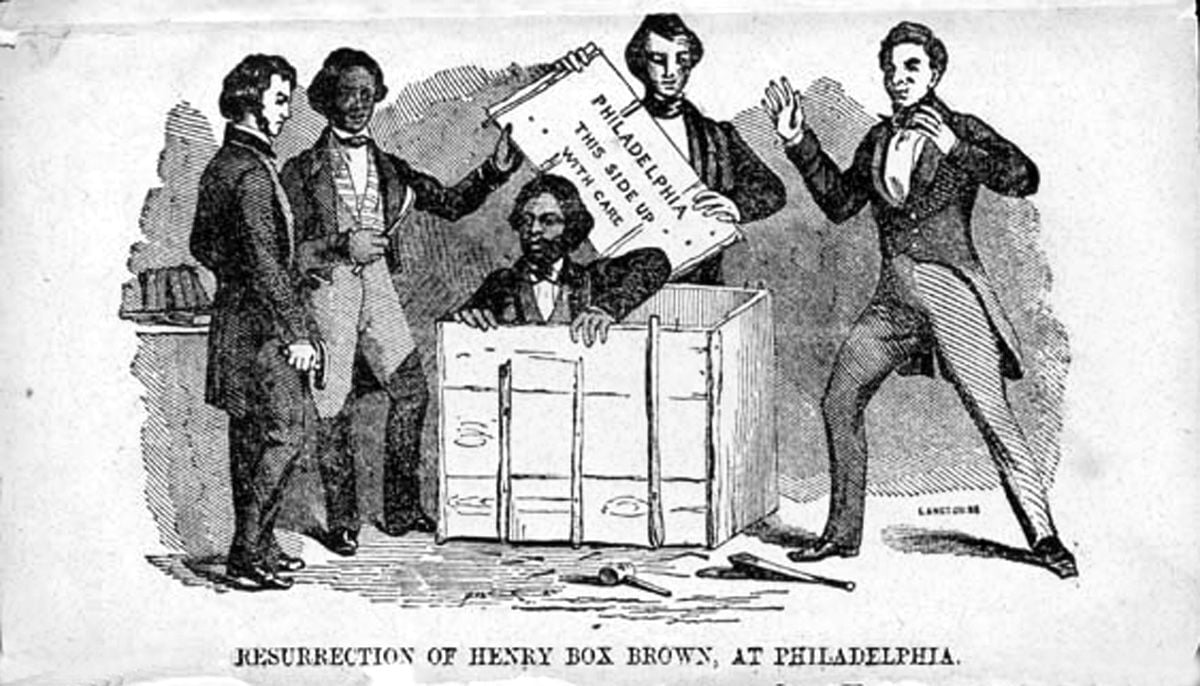 An engraving depicting the freeing of Henry Brown from the crate in which he journeyed to freedom from slavery.

An engraving depicting the freeing of Henry Brown from the crate in which he journeyed to freedom from slavery.

How strong is the human impulse toward freedom? How much will a person endure to attain it?

In the life of Henry Brown, born near Richmond, Va., in 1815, we could see the answers to those questions answered first-hand if time travel were possible for us.

If we moved in time and space to Philadelphia on March 30, 1949, and became unseen watchers of that day’s events in the Philadelphia Anti-Slavery Society’s building, we would see a group of people with their eyes fixed on a man crouched near a newly delivered wooden crate. We would see that man speak quietly into the box, and hear a voice speak back.

When pried open, the crate would disgorge its contents. That man, a Black man named Henry Brown, likely would have been stiff and maybe a little dizzy, because when he emerged from the crate, he’d had been inside it for 27 hours.

He’d entered the box in his native Virginia as a slave. When he emerged from it in Philadelphia, he was a free man, no longer within the boundaries of a slave-holding state.

Journeying to freedom in a wooden box was how Henry Brown, age 33, came to be called Henry “Box” Brown for the rest of his days.

His arrival in Philadelphia was not unanticipated. The whole unusual journey had been planned and thought out as thoroughly as possible. And to the pleasure of those who carried it out, the crazy, dangerous idea worked.

Henry’s astonishing and inspiring story did not have a promising start.

By the time the slave boy was 15, he was sent to Richmond to work in a tobacco factory, a miserable job he hated. His dull and controlled life was brightened as time passed by the girl he married (though slave marriages were not legally recognized at the time), a slave named Nancy. Three children were born to the couple, and she was pregnant again when the slaveholder who possessed her sold her in 1848 to another slaveowner who lived in North Carolina.

Henry had been promised that his wife would not be sold. The promise didn’t hold.

He had the stunningly painful experience of seeing 350 chained slaves march past him one day, among them his pregnant wife and their young children.

That experience and the general evil of slavery roused in Henry a determination to flee. But how?

The beginning of an escape plan grew out of his participation in the choir of the First African Baptist Church, which included another choir member named James Caesar Anthony Smith, a free Black man.

Smith knew another man named Smith, though not a relative. He was Samuel Alexander Smith, a white man who agreed to provide hands-on help and make important contacts further north.

Smith engaged James Miller McKim, a white abolitionist who was part of the Philadelphia Anti-Slavery Society, in a plot to literally ship Henry out of Richmond to Philadelphia, in a box.

The box was created in secret. It was a yard long, not quite a yard deep and only two feet wide. They lined it with a coarse cloth, made sure there was a small, hard-to-perceive opening to let air in, and put Henry inside, curled up to fit, though not comfortably. He had a beef bladder filled with water that he would use mostly to splash on his face to keep alert.

The Adams Express Company, which advertised an emphasis on not asking its customers many questions about what they were shipping, sent out the nailed up and strap-bound box, marked “Dry Goods,” on March 29, 1849.

According to a PBS account of Henry’s ordeal, Henry was to travel “by a variety of wagons, railroads, steamboats, ferries, and finally, for added safety, a delivery wagon that brought the box to the Philadelphia Anti-Slavery Society before daybreak” some 27 hours after it was first shipped.

The 172nd anniversary of the box reaching Philadelphia was this past Tuesday.

The journey, predictably, had not been easy. Though the box had “this side up” written on the end where Henry’s head was, the freight handlers weren’t stringent in heeding such directions, and Henry endured the worst parts of his journey upside down, blood being pulled by gravity into his head. Only the shifting and transferring of cargo put Henry into better positions and saved him.

One man who spoke later to Henry wrote that the upside-down travel “nearly killed him. He says the veins in his temples were as thick as his finger.”

Henry was, naturally, not free to call out for help in that it would reveal his presence and lead to him being captured as a fugitive slave. So he endured in silence.

When at last Henry’s box reached the Anti-Slavery Society’s headquarters and was carried in, a group of those who knew what was going on gathered to see if they would find the man in the crate alive or dead.

Here is how one of those present, described the scene:

“All was quiet. The door had been safely locked … saw and hatchet quickly had the lid off, and the marvelous resurrection of Brown ensued. Rising up on his box, he reached out his hand, saying ‘How do you do, gentlemen?’ The little assemblage hardly knew what to do or think at that moment.”

Henry Brown was at last a free man. That freedom was uncertain, though, especially after a change in the law the next year.

As reported by PBS: “With the passing of the Fugitive Slave Act on August 30, 1850, it was no longer safe for Brown to remain in the Northern Free States, as he could be captured and returned to Virginia.”

Previously slaves who had reached free territory were protected from being captured and returned to slavery.

Fearing the consequences of the new slave act, Henry, who had become an abolitionist lecturer in the northern states, left the United States and went to England.

There he became known for a stage presentation he created that presented the horrors of slavery and his own unusual escape from the slave states. He displayed the box in which he’d traveled as part of his show.

He published a narrative account on the same subject matter.

Henry became a lecturer/performer who drew crowds, and a natural streak of showmanship he possessed led him to become a “mesmerist,” what today would be called a stage hypnotist. He performed magic tricks.

He used the stage names “Prof. H. Box Brown” and the “African Prince,” in his latter years as a showman.

Henry was free to return to the United States after the Civil War and the end of slavery, and continued his stage presentations here and in Canada.

While in England, he’d married again. His new wife was the daughter of a tin worker in Cornwall.

He died in Toronto in 1897, but his story of relentless determination to be free lives on long after him.