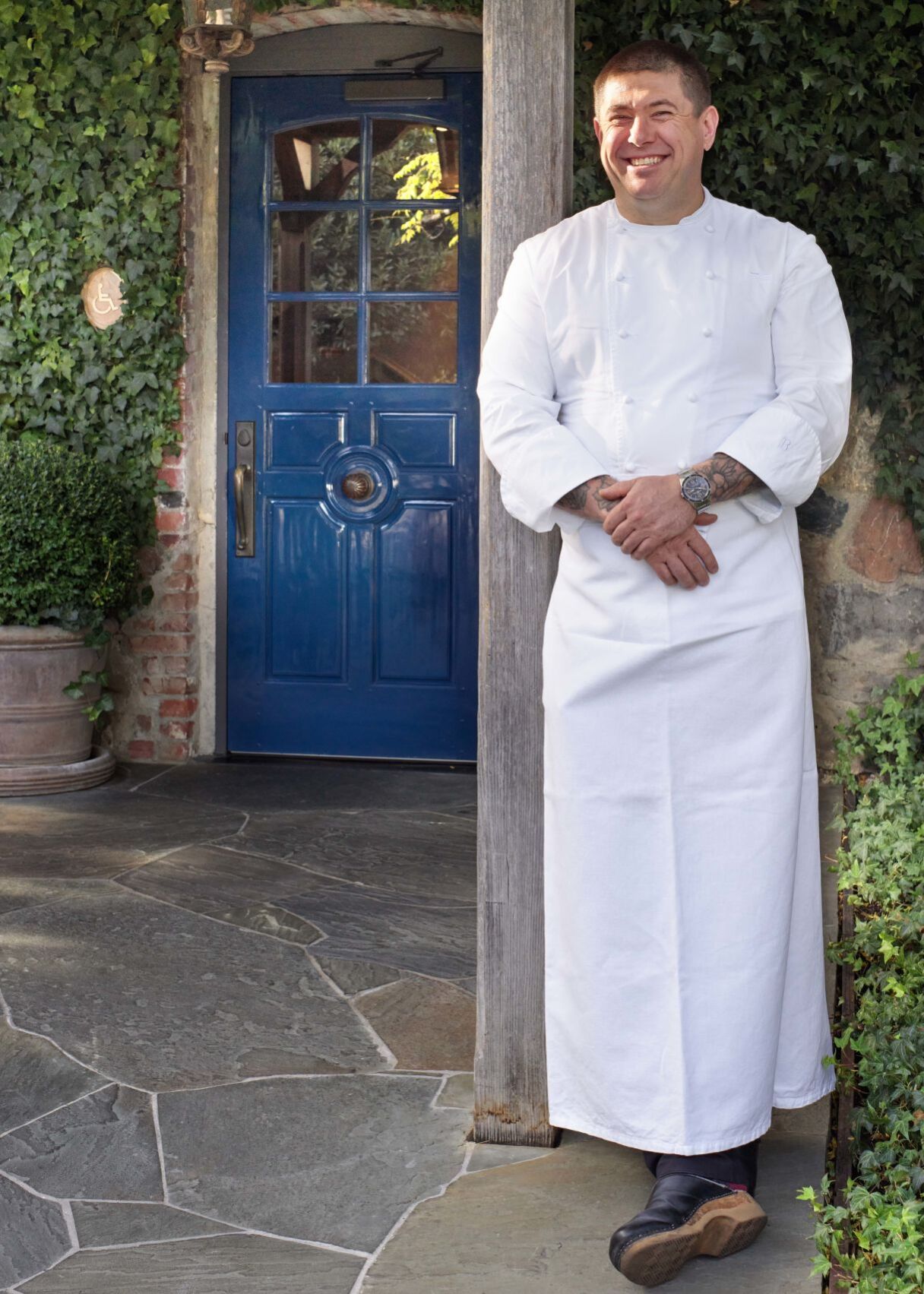 Chef David Breeden poses for a portrait. Breeden, chef de cuisine at The French Laundry in California’s Napa Valley, grew up in Greene County and took some of what he loved here with him as he built his culinary career. This photo is excerpted from “The French Laundry, Per Se” by Thomas Keller (Artisan Books). Copyright 2020. 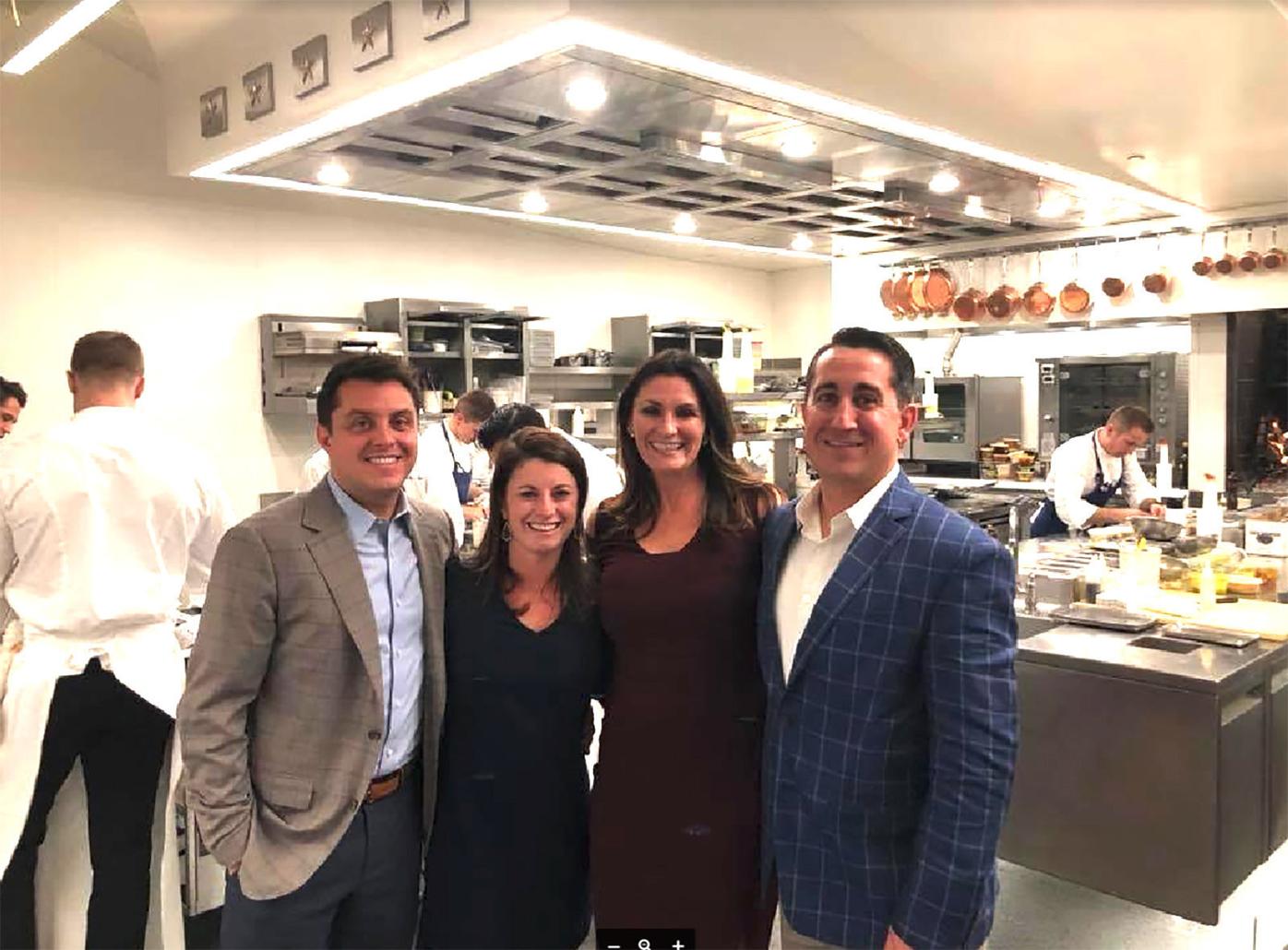 A little bit of Greeneville visited the kitchen of the 3-star Yountville, Calif., restaurant The French Laundry, in the fall of 2018. The chef de cuisine of the restaurant is a former Greeneville resident, David Breeden. From left, in foreground, are Curt and Aly Collins and Lindsey and David Lane. The man working with back to camera, visible over Curt Collins’s shoulder, appears to be Breeden. As a youth, Breeden worked washing dishes at Augustino’s, a Greeneville restaurant of that era. 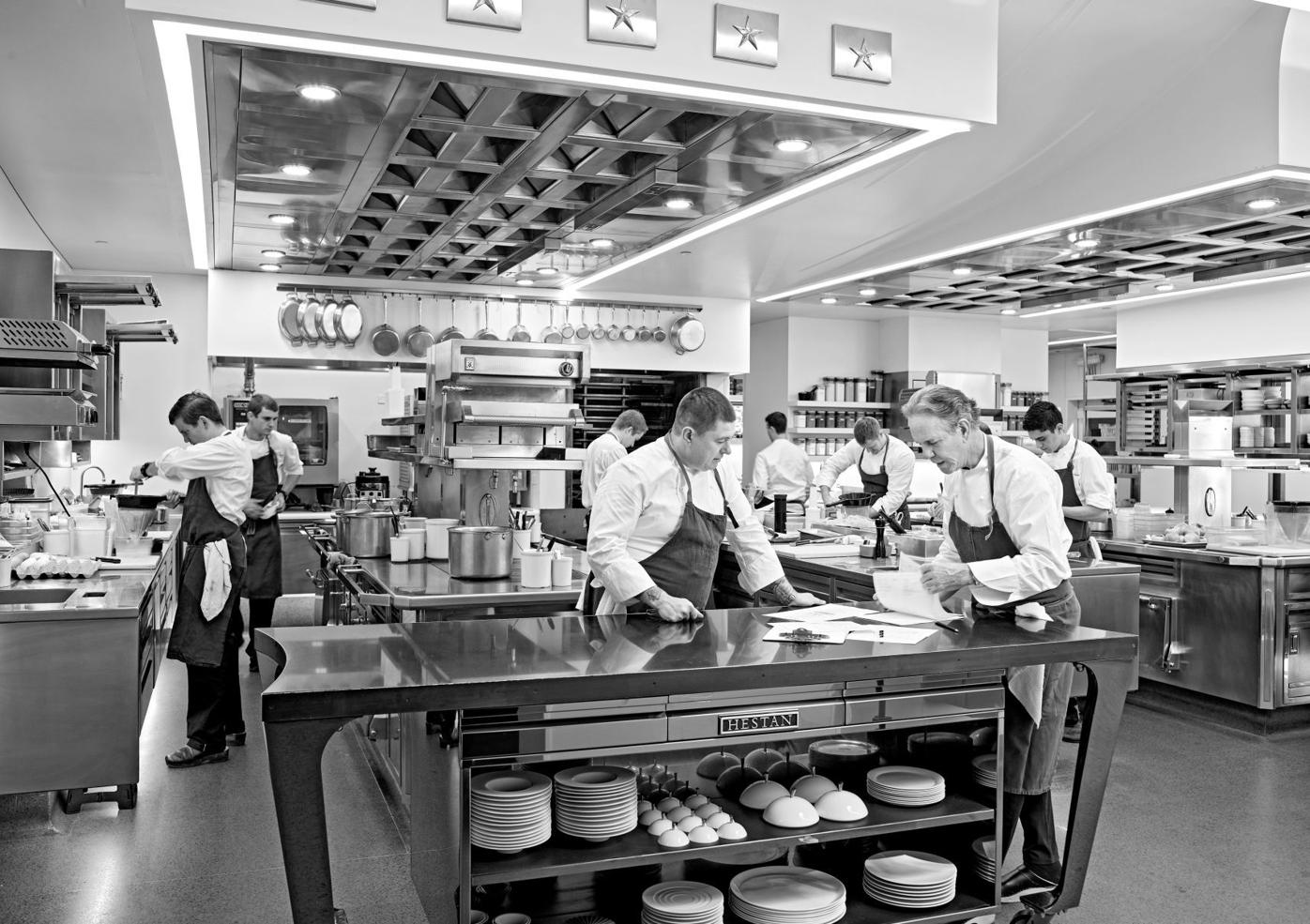 Chef David Breeden, standing at the table in the center of the photo, is seen with Chef Thomas Keller, right. This photo is excerpted from “The French Laundry, Per Se” by Thomas Keller (Artisan Books). Copyright 2020.

Chef David Breeden poses for a portrait. Breeden, chef de cuisine at The French Laundry in California’s Napa Valley, grew up in Greene County and took some of what he loved here with him as he built his culinary career. This photo is excerpted from “The French Laundry, Per Se” by Thomas Keller (Artisan Books). Copyright 2020.

A little bit of Greeneville visited the kitchen of the 3-star Yountville, Calif., restaurant The French Laundry, in the fall of 2018. The chef de cuisine of the restaurant is a former Greeneville resident, David Breeden. From left, in foreground, are Curt and Aly Collins and Lindsey and David Lane. The man working with back to camera, visible over Curt Collins’s shoulder, appears to be Breeden. As a youth, Breeden worked washing dishes at Augustino’s, a Greeneville restaurant of that era.

Chef David Breeden, standing at the table in the center of the photo, is seen with Chef Thomas Keller, right. This photo is excerpted from “The French Laundry, Per Se” by Thomas Keller (Artisan Books). Copyright 2020.

David Breeden, formerly of Greeneville and now chef de cuisine at The French Laundry, a three-star restaurant in California’s Napa Valley, never really left Tennessee behind when he set out on his distinctive career path across the nation. Metaphorically speaking, he just packed Tennessee up and took it with him.

That’s why, if you visit The French Laundry in the California city of Yountville and your order includes the house-made green goddess dressing, you can experience a bit of Greeneville’s own restaurant history. At The French Laundry, the green goddess dressing David makes deliberately mimics the taste of the version of that dressing served at Greeneville’s Augustino’s restaurant when David worked there in his teens, mostly washing dishes.

David’s late father, Mosheim’s David Anthony “Tony” Breeden, a welder at C&C Millwright, was such a fan of Augustino’s green goddess dressing that he refused to eat any bottled variety of it. When his son creates a new batch of green goddess today in The French Laundry kitchen, it is a quiet remembrance of his father and a reminder of Tennessee.

David left Tennessee in body but not in spirit. “I’m a Tennessean through and through … I have memories of being at Paint Creek and smelling the moss on the rocks at a very young age. I lived in Baileyton for a time. I lived way out in West Pines on a cattle farm when I was little, running and traipsing around those areas … and even later on, when my uncle moved to South Greene, going up through the mountains in South Greene, up to Round Knob – those memories to me are the real, true memories that I have. … it’s everything to me.”

Family influence was strong for the chef, who has known family sorrows. His father died in a traffic accident at age 42. David’s mother, Cindy Lou Kirkpatrick Breeden, passed away when the future chef was an infant, leaving him without the opportunity to know and remember her.

David’s professional moves caused him inevitably to put physical distance between himself and Tennessee kin, including his Uncle John and Aunt Angela Breeden of the South Greene area, and others from his father’s side of the family, as well as local Kirkpatrick and Tipton relatives of his late mother.

Family and family traditions helped point David in his professional career direction. Growing up surrounded by family members who were good cooks, David’s kitchen interests came naturally. The family dinner table also revealed to him the communal aspects of dining together.

One of his most cherished childhood memories is how his family “celebrated the meal,” particularly through Sunday dinners after church every week.

How did a Greene County youth with a restless spirit become the settled professional David is today?

It wasn’t something easily anticipated. David was directionless in his youth and ran sometimes with peers who either found trouble or made it.

He was in Greeneville High School before he left school at age 14 and took off into the world, looking for his future.

His cooking interests would eventually lead him into restaurant jobs, such as the one at Augustino’s, but a love of skateboarding stalled him for awhile as he hoped he might be able to build a career as a professional skateboarder. That didn’t prove out for him.

A Greene County friend, Chip Broome, a “tough guy and cool dude,” was a cook in a Knoxville restaurant, and “forged the path” for David to go there.

David landed at Knoxville’s prestigious Club LeConte, thanks to a man who changed his life: Chef Seth Simmerman.

Meeting Simmerman almost didn’t happen. David had sent a job application to Club LeConte, only to get no response for a discouragingly long time. So he visited a Navy recruiter and decided to become a Navy cook as an alternate route to culinary training.

Then, on the same day he was scheduled to finalize his enlistment, Simmerman called. He told David his job application had landed and languished on the wrong desk at Club LeConte, and only that day had reached his hands. Simmerman was impressed with the application and wanted to speak to David in person.

David thanked him for the call but told him he couldn’t accept the invitation because he was joining the Navy that very day. Simmerman had just the right background to respond to that.

Let me tell you something,” Simmerman said to David. “I was a chef on a submarine – and you really do need to come talk to me first.”

So David went to Knoxville to see what Simmerman had to say. Simmerman was quick to “make it clear that I didn’t know what I was doing,” David says, but also told David that he could “work his butt off” and learn. “That day is how it really and truly started for me.”

David apologized to the Navy recruiter for changing course so abruptly, then joined Simmerman in Knoxville. David has not regretted the choice, but has mixed feelings about missing out on military service. As an outspoken supporter of the American military and American law enforcement (he credits several current and former law enforcement officers with positively influencing him), he wonders sometimes if he might have been able to be in the Navy a few years and still continue his career path.

It’s all rearview mirror stuff at this point. At Club LeConte he built knowledge, skill and a lasting friendship with Chef Simmerman.

Eventually, David moved to Charleston, S.C., where he would associate with several high-quality restaurants. Simmerman had recognized David’s “drive, determination and desire” to grow professionally, David says, and personally drove the young man to Charleston’s Harbor Club to meet a restaurant-owning friend of his.

As David remembers it, Simmerman told his Harbor Front friend, “Look, this guy is hard-headed, but if you give him an opportunity, he’ll bust his butt for you.”

David got the job and started a new career chapter. “Charleston was a wonderful experience. I was surrounded by the most amazing hospitality, something very important to me. The cuisine was different than I’d experienced before … Charleston was quite a good time.”

Charleston allowed him to progress through multiple restaurant locations, learning along the way, and ultimately reaching The French Laundry, which David calls “the gem, the jewel of the restaurants in the United States in the style of cuisine we serve.”

Located in the Napa Valley wine country, the restaurant is “a very special spot.”

He continues: “How I ended up 3,000 miles away on the other coast is that I read an article about Chef (Thomas) Keller ... The article was called ‘Natural Born Keller,’ with a tagline: ‘One chef’s journey from hamburgers to haute cuisine.’”

An early interaction with Thomas Keller came when he walked into the kitchen and saw the famed chef, a “wizard of cooking,” cutting beans, a “menial task” that some chefs might leave to lower-ranked kitchen crew.

Others reportedly have encountered the down-to-earth Keller on his knees scrubbing the kitchen floor. David likes that unpretentious quality of his mentor and boss, under whose tutelage he rose to the level of chef de cuisine, leading food prep and menu operations day to day.

In David’s view, Keller’s greatest gift to the younger, rising professional such as himself is the way he guides them deeper into their work to uncover its meaning both practically and philosophically, always emphasizing the ultimate importance of the dining customer.

Describing himself as coming from East Tennessee people who “worked with their hands” as good craftsmen in whatever they did, David tries to instill a similar mentality into his kitchen staff. Good cuisine craftsmanship is the starting point, he says, and “when that foundation is built, then subtle nuances of artistry can begin to show.”

A new book written by Keller but including some content and several recipes by David Breeden and two other chefs at The French Laundry will be released this week. The simplest way for Greene Countians to obtain copies, according to David, is through Amazon.com.

The book’s title is “The French Laundry, Per Se,” by Thomas Keller.

For more information on The French Laundry, visit www.thomaskeller.com/tfl.