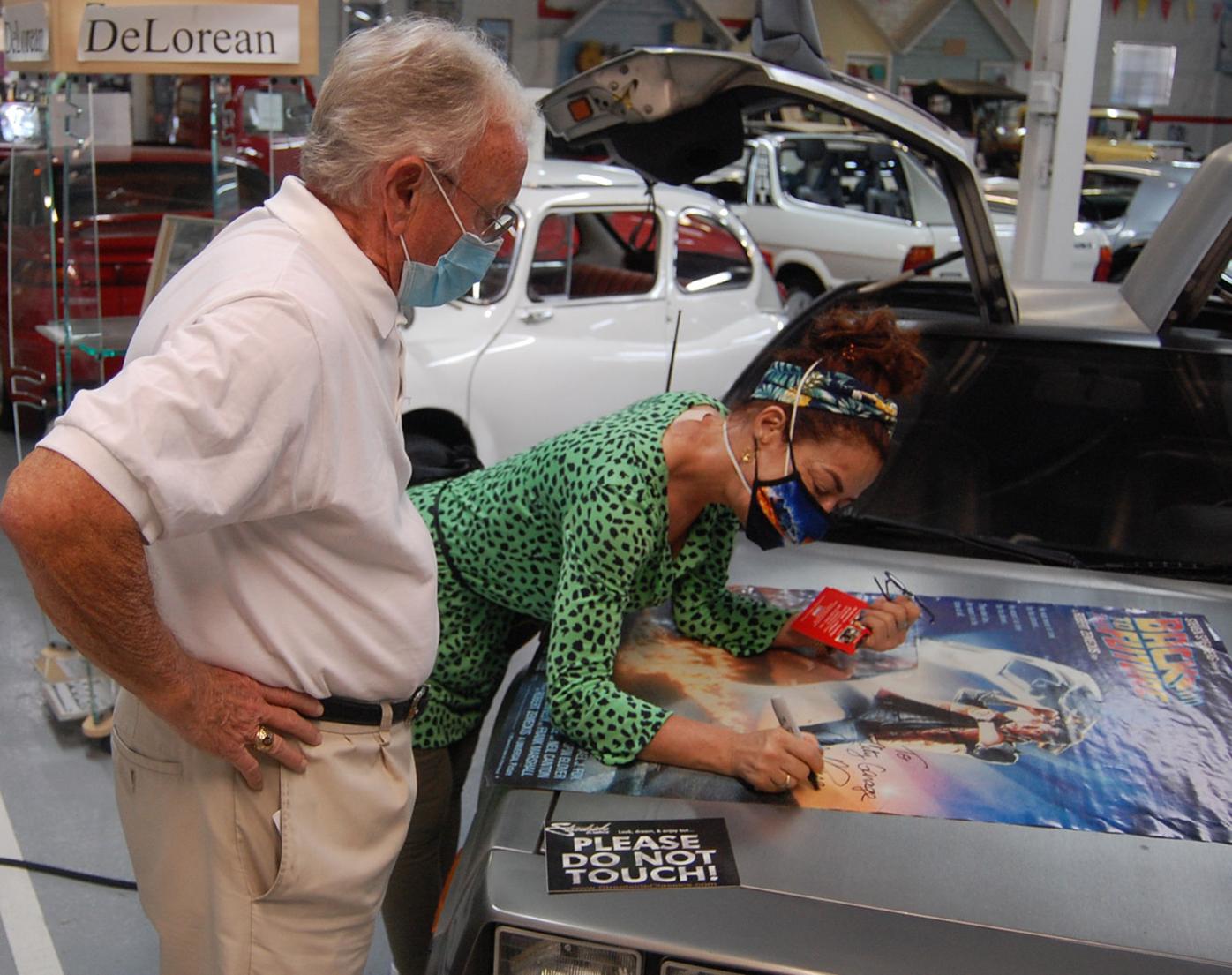 Claudia Wells signs a “Back to the Future” poster on the hood of a DeLorean in City Garage Car Museum as museum owner Kent Bewley looks on at left. 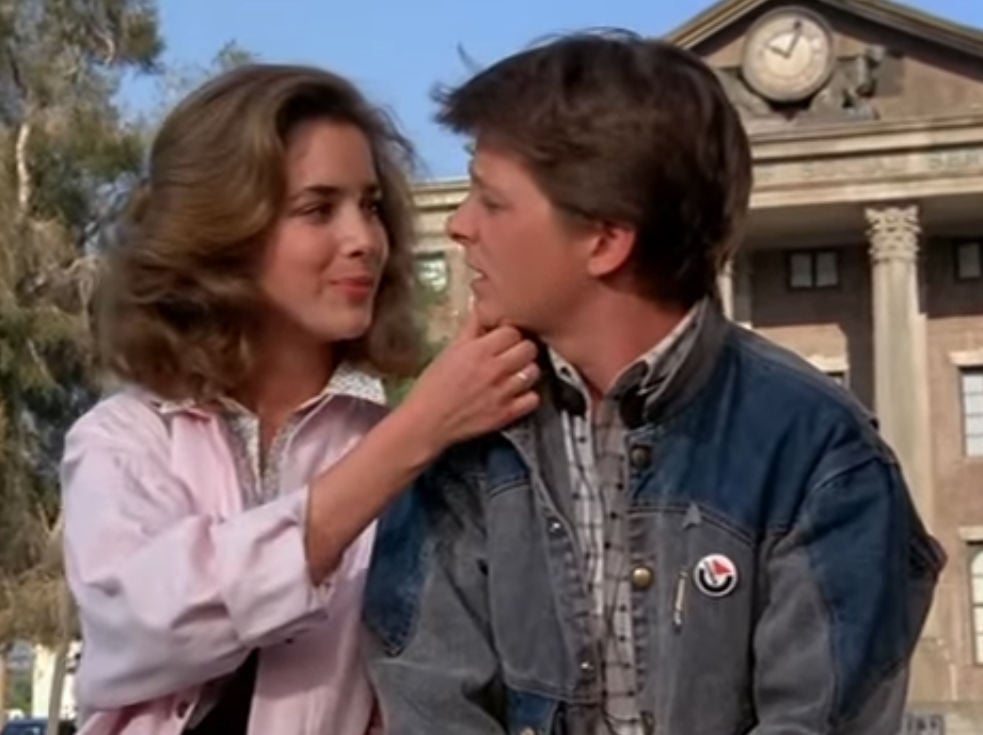 Claudia Wells with Michael J. Fox in “Back to the Future,” 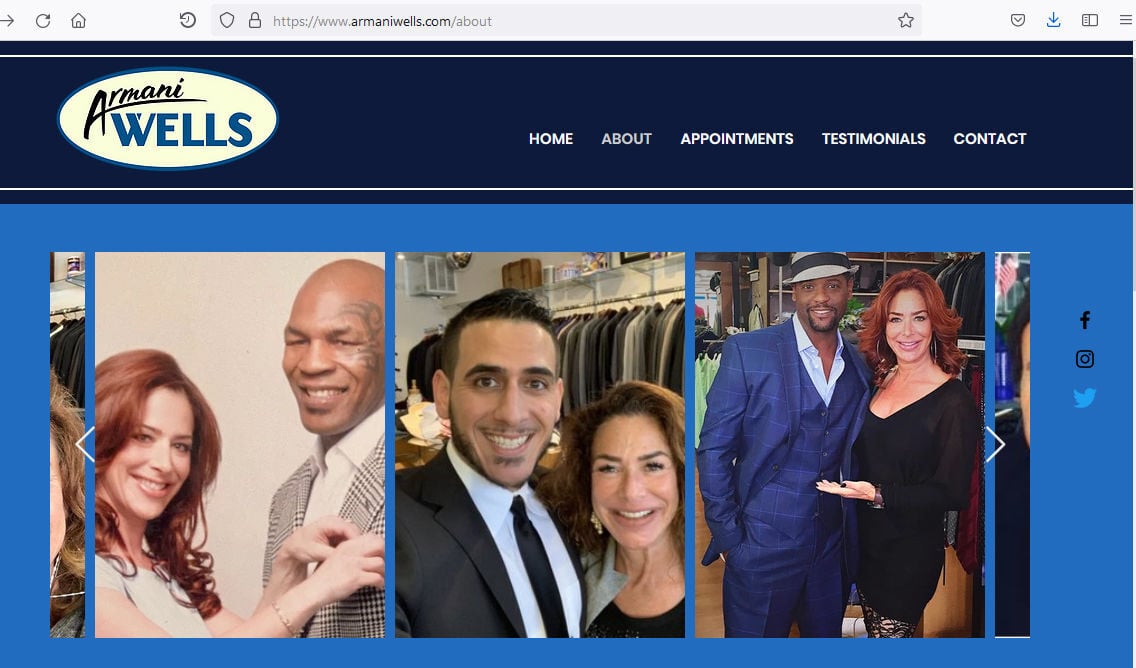 A screen shot from the website of Claudia Wells’ clothing store in Los Angeles.

Claudia Wells signs a “Back to the Future” poster on the hood of a DeLorean in City Garage Car Museum as museum owner Kent Bewley looks on at left.

Claudia Wells with Michael J. Fox in “Back to the Future,”

A screen shot from the website of Claudia Wells’ clothing store in Los Angeles.

You never know what a day may bring.

I was reminded of that fact Wednesday while heading toward home for lunch as I pulled over to a nearby parking lot to answer a phone call from Kent Bewley. Less than an hour later I was in Greeneville’s City Garage Car Museum, which Kent owns, interviewing an actress from a hit movie I saw many years ago and watched again recently.

As Claudia Wells looked over the DeLorean in Greeneville’s City Garage Car Museum Wednesday afternoon, it was not her first exposure to that type of car. More than 30 years ago she rode in a Delorean with her boyfriend, Marty McFly (played by Michael J. Fox), and a quirky scientist named Doc Brown (Christopher Lloyd). The latter had just returned from the future in a time-traveling DeLorean to fetch the younger pair “back to the future.”

Bearing its passengers, Doc Brown’s DeLorean, (with some capabilities the one in the car museum doesn’t have), lifted off the ground, tires folding up and tucking in, flew fast through the McFly family’s neighborhood, then vanished into the future in a dramatic flash of light.

That all happened in the closing scenes of the 1985 Spielberg comic sci-fi classic “Back To the Future,” which featured Claudia as Jennifer Parker, the girlfriend and future wife of Marty McFly. The actress, in Greene County at the moment to take part in this weekend’s Baileyton Days festival, said those scenes at the end of the movie actually were the first ones she filmed, movies usually not being filmed in chronological sequence.

It was a little surreal Wednesday to find myself interviewing Marty McFly’s girlfriend from the first “Back To The Future” movie. To repeat myself, you never know what a day may bring.

Though Claudia’s acting career has involved more than “Back To The Future,” that film remains the one with which she is most strongly identified.

Today her professional life centers less on acting and more around her loved ones and the Los Angeles store she runs as a successful businesswoman.

Energetic and outgoing, Claudia Wells engages readily in conversation and is happy to talk about her life and work, and the things she values most in her life, such as her Christian faith. That particular journey began for her while she was part of the television series “Herbie The Love Bug” with the late actor Dean Jones. On the set, Jones encouraged her, day to day, to make her own Christian commitment. He and his wife even took her with them to church.

Living as a Christian in the movie industry of California is challenging, she says. “It’s a challenge to walk the kind of walk I want to do for God, but there’s a freedom that I experience when I do.”

The subject of her faith came up naturally as she talked about the store she operates in Studio City, a neighborhood of Los Angeles in the southeastern San Fernando Valley.

She does not think of herself as the store owner. “God owns the store and I get to run it,” she says. “The Lord Jesus Christ, my Savior, is the founder and owner of the store. That’s the truth.”

The store, which will be 30 years old in December, resells high-end men’s garments at a fraction of the original price and is open by appointment.

Should anyone reading this have a California visit coming up, information about the Armani Wells store can be found at the website armaniwells.com, as can a link to make an appointment to visit the store.

Claudia Grace Wells has been a Californian since she was seven weeks old. Her father is Dr. Donald Heyneman, born in San Francisco in 1925 and educated at Harvard University and Rice Institute. She describes him as one of the world’s “leading epidemiologists.” He was conducting epidemiological research in Malaysia when she was born there in Kuala Lumpur, the capital city, but moved his family back to his native California while Claudia was an infant.

She remains close to her 96-year-old father today. And no, she says, being an epidemiologist’s daughter does not give her insider knowledge on COVID-19.

But she is cautious regarding that disease, faithfully wearing her mask and replacing handshakes with fist-bumps.

Claudia grew up in San Francisco until she was 14 and the family moved to Beverly Hills. Coming from a family line long populated with artistic, creative people, she knew from early childhood she would be an actress, and screen testing for roles became a familiar routine of life.

Her big break of “Back to the Future” almost did not happen. She was cast in the role of Jennifer, but a contractual conflict with a television pilot for ABC initially forced her out of the film, which at the beginning was to star Eric Stoltz, rather than Michael J. Fox.

Delays brought about by the change of actors gave her time to get past her television commitment and rejoin the movie’s cast.

Some of her other work has included a television movie, “Babies Having Babies,” and the television series “Fast Times,” adapted from the film “Fast Times at Ridgemont High.”

Her television work includes a co-starring role in the TV comedy series “Off the Rack,” and appearances in such shows as “Family,” “Simon and Simon,” “Trapper John” and “Fame.”

She took a hiatus from performing after her mother was diagnosed with cancer. That hiatus made her unavailable for the two “Back to the Future” sequels, in which the Jennifer Parker role was taken over by Elisabeth Shue.

Claudia provides the voice of Jennifer Parker in “Back to the Future: The Game.”

She remains friends with some of the others involved in the movie, including actor Donald Fullilove, who played Goldie Wilson, and Crispin Glover, who portrayed George McFly, Marty’s father. She also is a friend of Bob Gale, writer-producer of the film.

She recalls “hanging out” with Michael J. Fox on the film set, listening to music and chatting during breaks. At that time, Fox showed no indications of the Parkinson’s Disease that eventually would change his life.

What about Christopher Lloyd? Is he as quirky as the character he played in the film?

Not at all, she says. She describes Lloyd as a serious, quiet man, one who “speaks when he has something to say” but is happy to remain quiet and unobtrusive otherwise. “Humble,” is a key word in how she characterizes him.

I asked her why, in her opinion, “Back to the Future” has maintained popularity for so many years now.

The answer, in her view, is its relevance. The story touches on things everyone thinks about. Where did I come from? What was it like before I was here? What were my parents like as young people? What if things had been different?

“Back to the Future” involves all those matters, she notes, and does it entertainingly. That’s why it has held up since the mid-1980s.

And there’s one other reason she cites: “I truly believe that movie was kissed by God.”

Baileyton Days Celebration will be held Friday-Sunday on the grounds of the Baileyton Elementary School. This marks the 27th year of the celebration, which was canceled in 2020 due to the COVID-19 pandemic. The celebration’s theme is “2021 Looking To the Future.”

Johnboy’s BBQ (Moonshiners Smoke Ring) and celebrities from Master Distillers also will participate. Barney Fife and his patrol car and the DeLorean Time Machine from “Back to the Future” will be on display Friday 4-10 p.m. and Saturday 9 a.m.-5 p.m.

Ricky Morton of the wrestling team Rock-N-Roll Express and the School of Morton will join the celebration Friday and Saturday.

Visit baileytoncelebration.org online for more information about the weekend celebration.