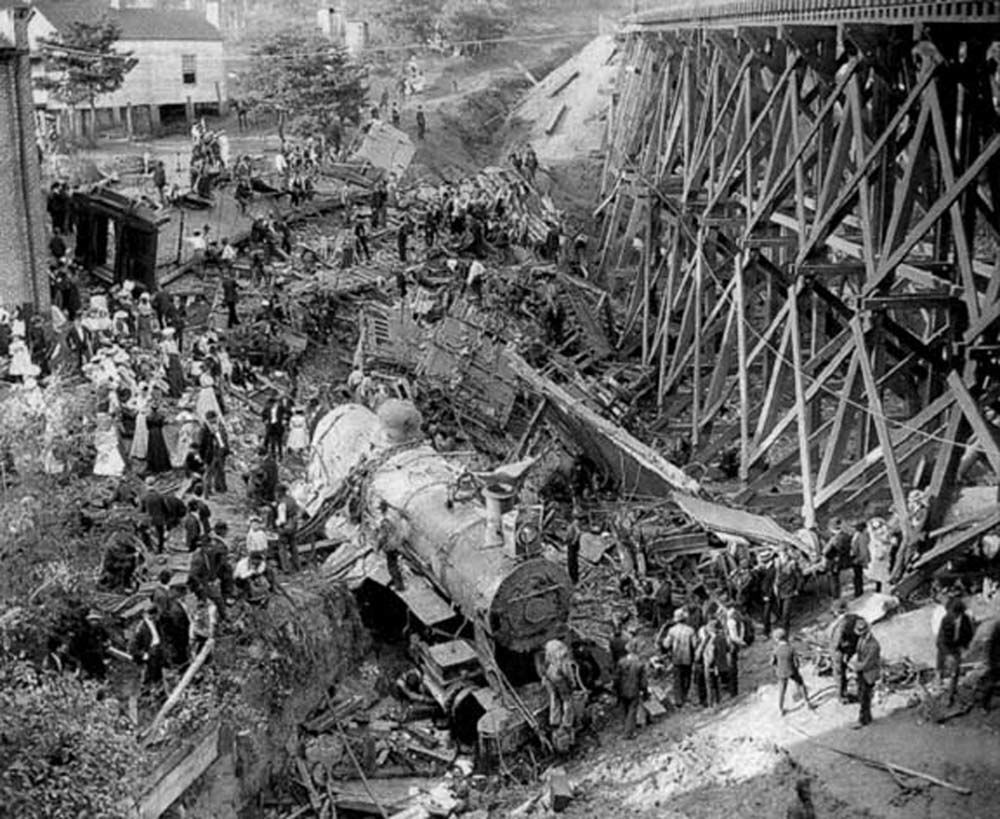 This photograph of the aftermath of the crash of the “Old 97” in 1903 Danville, Va., shows the locomotive after it has been set upright. It was resting on its side immediately after the accident. 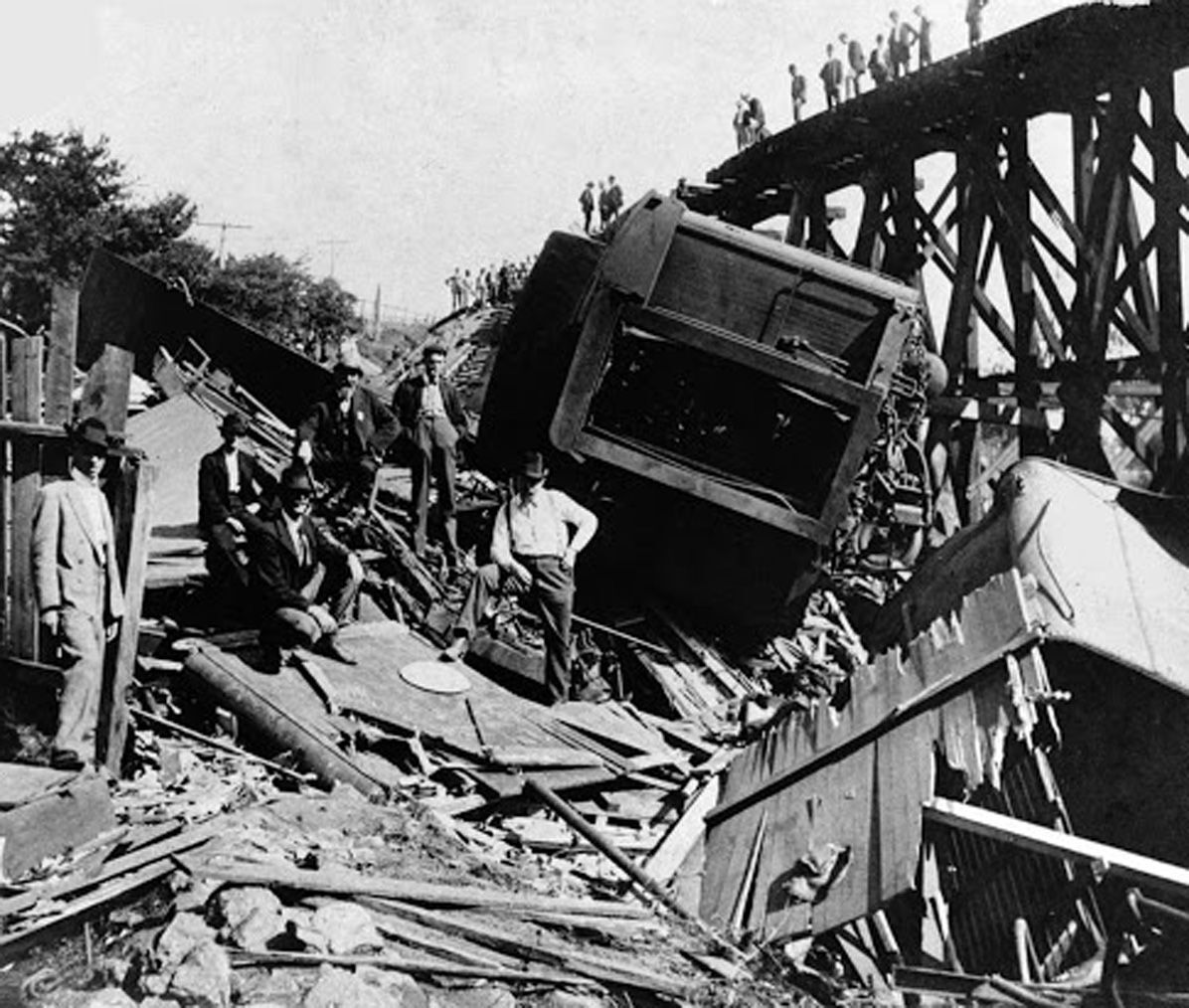 Another view is seen here of part of the Old 97 wreckage. Note the height of the Stillhouse Trestle in the background. The train plunged from the trestle due to overly fast speed.

This photograph of the aftermath of the crash of the “Old 97” in 1903 Danville, Va., shows the locomotive after it has been set upright. It was resting on its side immediately after the accident.

Another view is seen here of part of the Old 97 wreckage. Note the height of the Stillhouse Trestle in the background. The train plunged from the trestle due to overly fast speed.

When Joseph Broady, a 33-year-old train engineer on the Southern Railway, climbed into the locomotive 1102 on Sept. 27, 1903, he likely had no ambitions of putting his name into the history books that day.

Certainly he had no plan to experience what would happen to him later that day.

The plan was to drive the train to Spencer, N.C., where it would begin the next leg of a journey to Atlanta. Southern Railway had won a $140,000 government contract to deliver mail from Washington, D.C., to Atlanta, a contract that would equal many millions of dollars in today’s money. But built into the contract were very heavy fines for running late.

When Broady entered the locomotive hooked to train number 97, also called the Fast Mail, the day’s run already was an hour behind schedule due to a late delivery of mail cargo from New York and Philadelphia. But Broady wasn’t going to have a late arrival on his watch, if he could help it.

“Old 97,” as the train also was called, would have to travel fast indeed to make the official deadline. In Monroe, Va., Broady was instructed by superiors to make all due haste and even bypass one or more of its usual stops along the way. The young man was under pressure.

Heightening the tension was the nature of the track ahead, which had curves and similar obstacles to fast travel. Broady screwed up his courage and proceeded, aiming to follow the plan.

Unknown to him, destiny had plans of its own for him and Old 97. In Danville, Va., the train would have to traverse a trestle built across a ravine. The railroad speed limit for that trestle was very low. A dangerous situation was brewing.

Those who have studied what happened on the rail line that day have calculated that the normal speed of the train in traveling from Monroe to Spencer was about 39 mph. With the hour’s delay handicapping him from the start, Broady would have to travel more than 50 mph to make up the lost time.

Stillhouse Trestle stood 45 feet tall at Danville and was at the end of a steep grade. When Broady reached the trestle, his train was barreling along somewhere between 30 and 50 mph.

It was far too fast. The Fast Mail went onto the track atop the trestle and simply left the rails, propelled by its own momentum. Witnesses to the event said that the train whistle sounded like a scream by the time the inevitablility of the crash became obvious.

That detail would find its way into a famous disaster ballad written about the accident, “The Wreck of the Old 97.” The opening lines go: “They handed him his orders in Monroe, Virginia,/ saying ‘Steve, you’re way behind time. This is not 38, it’s the Old 97./ You must put her into Spencer on time.”

Later, the song exaggerates the speed of the train, saying “He was going down the grade doing 90 miles an hour when his whistle broke into a scream.”

The train was not to reach Spencer that day. It crashed into the ravine, tearing down telegraph poles and lines as it fell. Fire broke out and burned much of the wood making up the cars.

Of the 18 men on the train, 11 would die, nine of them instantly. The latter group included Broady and his two firemen.

The song notes that Broady was “found in the wreck with his hand on the throttle, all scalded to death by the steam.”

There were a few survivors who leaped from the train before it went onto the trestle. That leap from a train speeding as fast as Old 97 was in itself a risky move, but ultimately a life-saving one for some who dared to do it.

Americans of that era loved disaster songs, and it took little time for someone to put together the song “The Wreck of the Old 97.” Like the train itself, the Old 97 song would make history, becoming the first song of its type to sell more than a million records.

Exactly who wrote the lyrics was a point of dispute that wound up in the copyright courts. The melody was no mystery: it was borrowed directly from a Civil War-era song named “The Ship That Never Returned.”

Two Virginia musicians made the first recording of the “Old 97” song in the early 1920s, with Vernon Dalhart’s highly popular cover of it emerging in 1924 and generating those record-setting sales.

It has been recorded again and again ever since in styles ranging from highly traditional through alt-country. Artists who have performed it include The Statler Brothers, Charlie Louvin, Flatt and Scruggs, Woody Guthrie, Pete Seeger, Johnny Cash, Roy Acuff, Boxcar Willie, Ernest Stoneman, Hank Snow and more.

Even John Mellencamp did a version in a distinctive, slower manner that gives the song a decidedly melancholy feel. You can find it on YouTube should you want to check it out. I liked it.

Like many of the disaster songs of America, the song ends with a moral lesson, in this case, one aimed at women, despite women not being involved in the accident.

With some minor variations in wording, the last verse typically goes: “Now all you ladies, you had better take a warning from this time on and learn: Never speak harsh words to your true loving husband. He may leave you and never return.”

My dad used to sing the song around the house for his own entertainment. The last verse as he sang it was different from the one above.

He always sang: “Now railroad men, you may all take warning from the fate that befell this young man. Just remember that the step is a short one from this world to that promised land.”

I’m not sure, but I think Dad borrowed that ending from a different railroad crash song, maybe by mistake, maybe because he just liked it better. Either way, the words do fit with the melody.

Years later, Some people have had fun with the song. Folk legend Pete Seeger’s famous Communist associations earned him some good-humored jabs set to the tune of “The Wreck of the Old 97.”

The parody ribs Seeger as follows: “They handed him his orders at party headquarters, saying ‘Pete, you’re way behind the times. This is not ‘38, this is 1947 – there’s a change in the old party line.”

The crash of the Old 97 was not one of history’s largest, but thanks to the musical and lyrical creativity applied to it, the 1903 disaster has remained one of the best-known train crashes in American history.

The locomotive involved actually was repaired and put back into use by the railroad for several more years.

Railroad officials denied having pressured Broady to travel at an unsafe speed, but the song condemning them has outlasted the denial, in the public mind, at least, for many decades now.