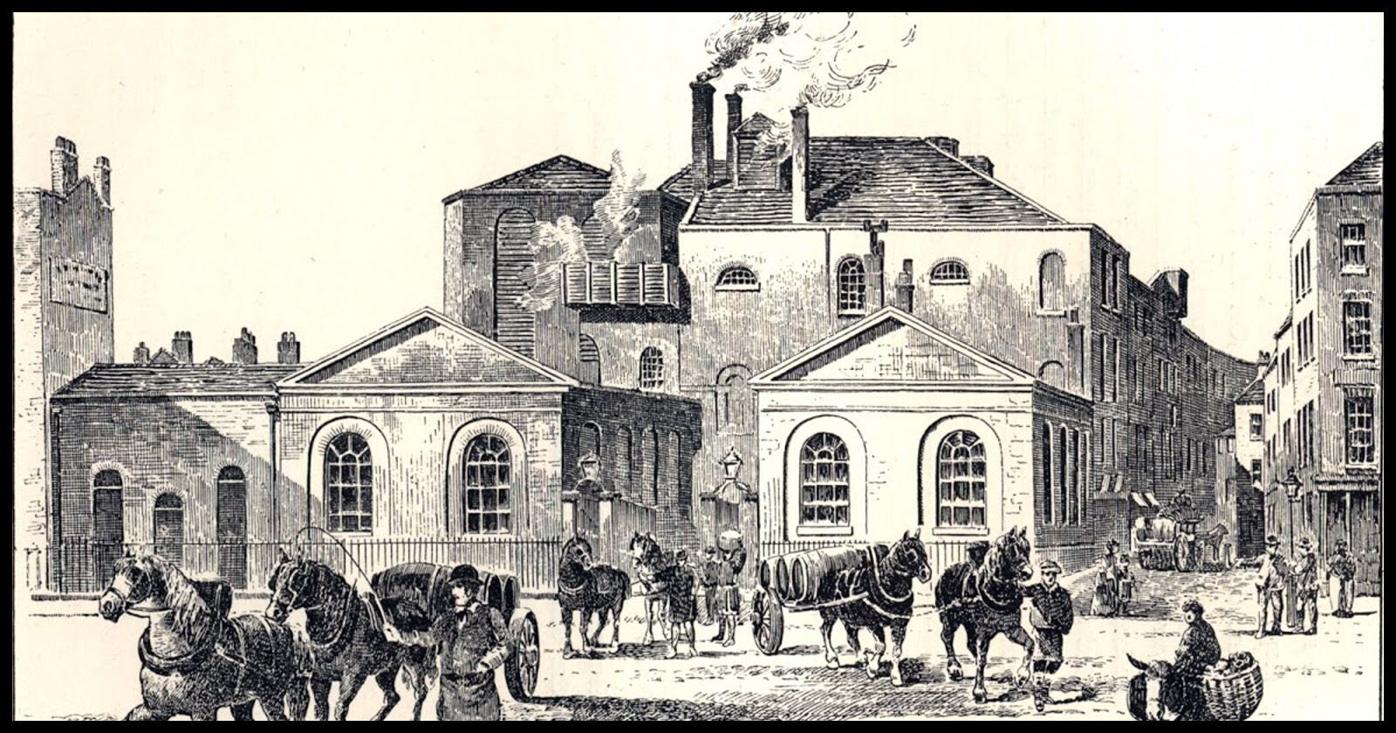 This London brewery was the location of one of England’s most unusual industrial accidents, one that brought death to eight people in an Irish enclave in the city’s St. Giles district. The illustration depicts it as it appeared around the time of the accident. 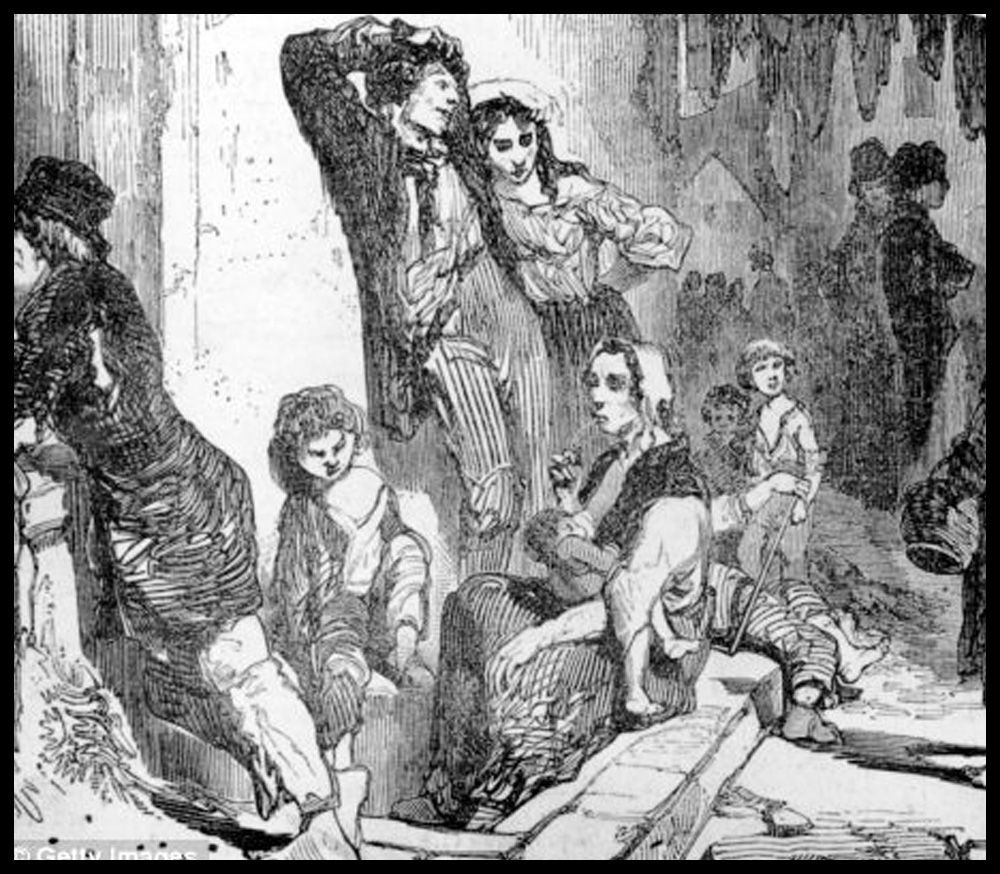 Irish residents of the slummy areas of St. Giles were perceived unflatteringly as drunkards and low-lifes by the English around them, as this old illustration reflects.

This London brewery was the location of one of England’s most unusual industrial accidents, one that brought death to eight people in an Irish enclave in the city’s St. Giles district. The illustration depicts it as it appeared around the time of the accident.

Irish residents of the slummy areas of St. Giles were perceived unflatteringly as drunkards and low-lifes by the English around them, as this old illustration reflects.

A tsunami 15 feet high in the heart of London, England doesn’t seem a likely event given the city’s location. But on a long-ago autumn day, it happened.

This was no ordinary tsunami, however. No ocean tidal wave or destroyed coastline was involved. This tsunami wasn’t even composed of water.

It was a huge flood of beer, and despite how easy it would be to joke about how many folks might feel favorably about being washed over by that particular beverage, the so-called “London Beer Flood” of Oct. 17, 1814, was tragic and caused fatalities.

As so often seems the case when bad things happen, the ones most directly and lethally impacted were the poor. In this case the poor people were in the slums of St. Giles, where many residents were Irish.

Today being St. Patrick’s Day, it seems an ironically appropriate occasion to remember the residents of that Irish enclave so sadly affected by one of the most bizarre industrial accidents in history.

I wrote a few weeks ago about the great flood of molasses that once swept through Boston when an industrial storage vat ruptured. The London Beer Flood from nearly a century earlier had some similarities in its cause. In both situations, huge storage vessels gave way beneath the pressure of liquids inside them, and flooded out lethally into streets and alleys.

The Horseshoe Brewery of Henry Meux and Co., a long-established beer-maker that specialized in the dark-hued brew called porter, had storage vessels inside of it that were essentially hugely over-sized barrels, complete with iron hoops holding them together. The vat that initially failed and set off the strange tragedy was 22 feet tall, and the porter inside it was fermenting, steadily increasing the internal pressure.

A brewery employee noticed a problem that October day: one of the huge metal hoops that kept the staves of the gargantuan barrel together had slipped off. This generated concern but not panic; it wasn’t particularly unusual for a hoop to come off, and usually there was no bad result.

The employee reported what he’d seen to his supervisor.

The overseer on duty chose to defer dealing with the problem to the next man coming in to take over for him, and business as usual went on for a brief time in the Horseshoe Brewery. The buck had been passed, but too late.

When the vessel gave way, it did so with a loud explosive, splintering sound that rocked the building.

The history.com website says: “The blast broke off the valve of an adjoining cask that also contained thousands of barrels of beer and set off a chain reaction as the weight of the 570 tons of liquid smashed other hogsheads of porter.”

Five-hundred-seventy tons of dark, fermenting liquid, burst out of the brewery like the contents of an overfilled, breaking water balloon … it must have been horrifying.

One of the first to die was a 14-year-old girl named Eleanor Cooper, who was scouring crockery for a nearby pub located on the other side of a tall brick wall that separated it from the brewery grounds. The liquid crashed against that wall, and down the wall came atop young Eleanor, ending the pub girl’s life as if she were a bug under a boot heel.

She’d been outdoors, near the wall, when it happened. It can at least be hoped that her death was sufficiently swift that she never had any real awareness of being suddenly and fatally crushed.

The streets of the district had no drainage system and the dark flood pushed its way into the rough and poor houses, driving people to climb atop furniture to save themselves. In some cases the flood knocked dwellings off their foundations and smashed them.

Astonishingly, everyone inside the brewery survived. But outside, in the streets and slum dwellings, eight people died. One of them was a 3-year-old girl. Another was a woman mourning over the corpse of her son, who had died a day earlier. She would be buried beside him.

The owners and operators of the brewery mostly got off the hook. Christopher Klein, who wrote the history.com story, summarized the aftermath thusly: “Only two days after the catastrophe, a jury convened to investigate the accident. After visiting the site of the tragedy, viewing the bodies of the victims and hearing testimony ... the jury rendered its verdict that the incident had been an ‘Act of God’ and that the victims had met their deaths ‘casually, accidentally and by misfortune.’

“Not only did the brewery escape paying damages to the destitute victims, it received a waiver from the British Parliament for excise taxes it had already paid on the thousands of barrels of beer it lost,” Klein wrote.

A sudden and unforeseen tide of death in the form of dark porter beer washing down streets ... surely one of the strangest moments in London history. And for those impoverished families of the residents of that Irish enclave who died, one of the saddest.

If you are one of those who imbibes green beer to celebrate St. Patrick’s Day, maybe raise a glass of it tonight in memory of young Eleanor Cooper and those others lost on that October day so very long ago and far away.

If you do drink the green beer, don’t drink too much of it, and certainly don’t drive if you do. Too much beer can cause far more tragedies than just 19th century tsunamis.