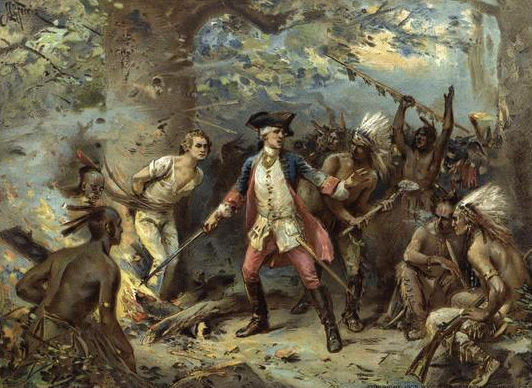 This old painting depicts Israel Putnam, bound to a tree, being rescued from execution at the hands of Mohawk Indians through the intervention of a French officer during the French and Indian War. A Tennessee county is named for Putnam. 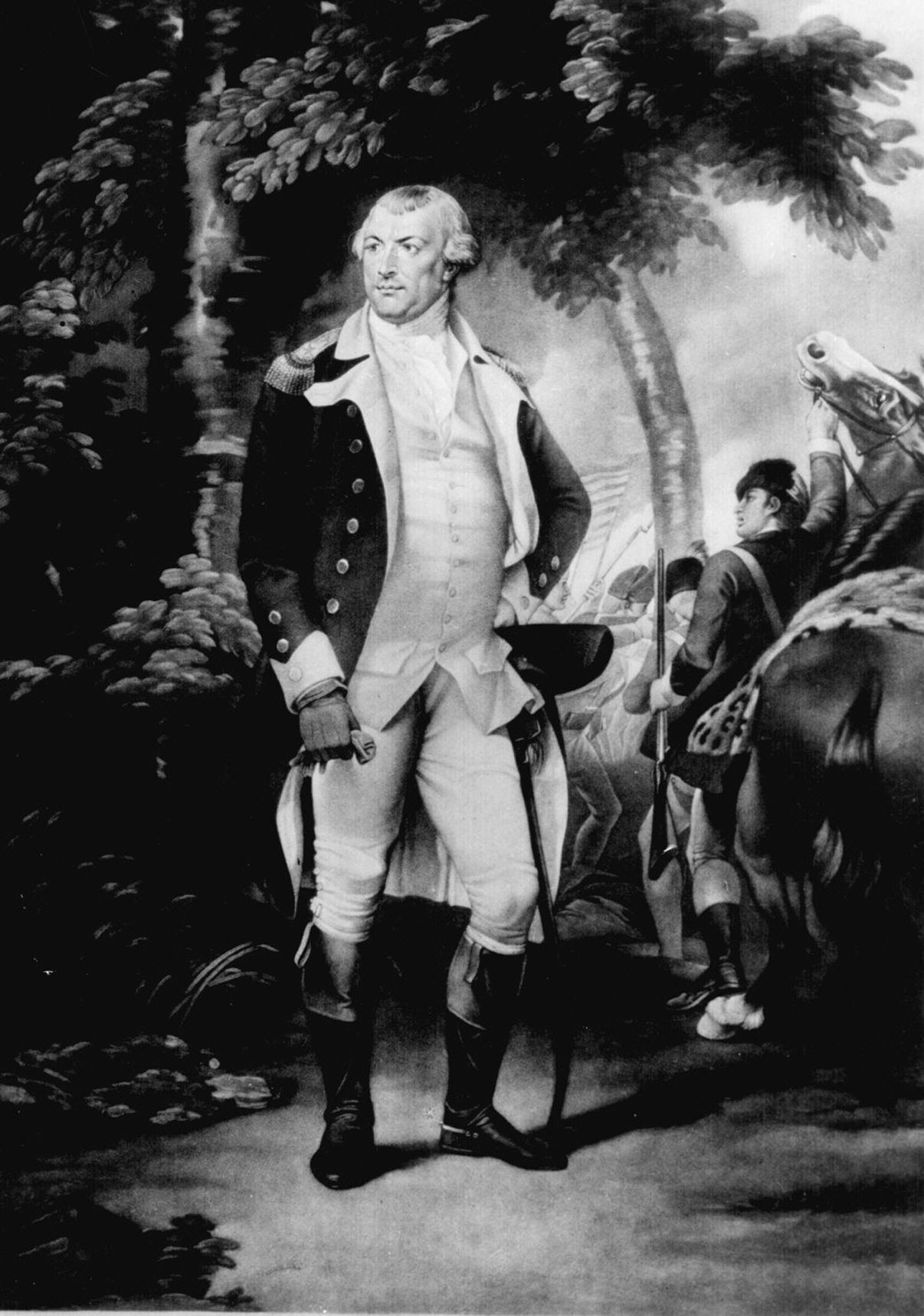 Nathanael Greene, for whom Greene County is named.

This old painting depicts Israel Putnam, bound to a tree, being rescued from execution at the hands of Mohawk Indians through the intervention of a French officer during the French and Indian War. A Tennessee county is named for Putnam.

Nathanael Greene, for whom Greene County is named.

After finding, in an old file, a list of the names of Tennessee’s 95 counties recently, I realized how many of them bear the names of historical figures I know nothing, or almost nothing, about.

Being born and raised in Putnam County, I learned as a kid that my home county was named for Israel Putnam. Living now in Greene County, I know this county is named for Nathanael Greene. But I have to admit that I had only the vaguest scraps of knowledge about the human beings who bore those names before the counties did.

Basically, I knew they were members of the DEAD GUYS WHO DID IMPORTANT STUFF Club. My own ignorance made me uncomfortable, so I started looking some things up.

My search started where I started myself: Putnam. I found some interesting things.

I hadn’t known that Israel Putnam was known by the nickname of “Old Put,” or “Wolf Put,” the latter because he once killed a sheep-killing wolf in its own den when no one else was willing to crawl in after it. He crawled in with a rope tied around his ankle so they could pull him out again if the wolf objected to the visit.

I also didn’t know “Put” almost got himself executed by burning by Mohawk Indians who captured him during the French and Indian War. They frequently killed captured enemies that way.

Fortunately for “Put,” a French officer allied with the Mohawks intervened and saved him from the fire. A conveniently timed rainfall helped a bit too.

That’s only two of several nail-biting events in Israel Putnam’s life. A pretty tough customer, “Put” was, a man who earned the right to be remembered.

As for Nathanael Greene, I vaguely was aware that he was raised a Quaker and drifted away from that peaceable faith to become a military man. In fact he became George Washington’s most trusted major general. And I knew that his name became attached to our county due to a land grant given to him in what would become Tennessee, though he never lived here.

One of his top commanders was Daniel Morgan, after whom Morgan County, Tenn., is named.

Looking over that list of Tennessee counties, I realized that I knew absolutely nothing at all about very many of the people whose names they bear. For instance, who was the DeKalb whose name is attached to Middle Tennessee’s DeKalb County? I looked it up.

Who he was, was German-born Johann von Robais, Baron de Kalb, who accompanied LaFayette to America in 1777. He became a major general in the Continental Army and died from wounds suffered at South Carolina’s Battle of Camden.

Ever heard of Weakley County? It is named after Robert Weakley, who was in the North Carolina Constitutional Convention (Tennessee was once part of North Carolina), and served in the Tennessee House of Representatives. He also was a militia colonel, speaker of the state senate, a member of the U.S. Congress and part of the Tennessee State Constitutional Convention of 1834. This was one active fellow, obviously, but one I might never even have heard of had not a county been named for him.

Overton County is familiar to me because of its proximity to my home county. It was named for an early attorney, John Overton, a friend of Andrew Jackson and noted Tennessee jurist. Overton was one of the founders of the city of Memphis, and is credited with naming it.

Col. Robert H. Dyer, who served with Andrew Jackson in the Natchez Expedition, the Creek War and the Seminole War, is the man for whom Dyer County is named. Dyer also is one of those who “made a little trip with Jackson in which they “took a little bacon and took a little beans, and fought the bloody British at the town of New Orleans,” as the song has it.

Who was William Carroll, for whom Carroll County is named? He was an officer in the War of 1812 who went on to be elected governor of Tennessee with sufficient regularity to become the man who held the governorship in this state longer than any other.

He also probably is the only Tennessee governor to have his name referenced, indirectly, in a Porter Wagoner song: “Carroll County’s pointed out as kinda square/ The biggest thing that happens is the county fair/ I guess that’s why it seems like such a big event/ What we all call the Carroll County accident ...”

What about our neighbor Unicoi County? Sounds like an Indian name, but if so, who was Unicoi? A noted chief or warrior, maybe?

There was no person named Unicoi, that I know of. It’s not a personal name but a descriptive word meaning “white” or “fog-shrouded.” The same Cherokee root word lives on in slightly different form in the word “Unaka,” which you encounter around our region quite a bit (Unaka Mountain Range, Unaka High School, etc.), including right here in Greeneville, where we have Unaka Street.

It is interesting how much history and heritage is tied to the names of Tennessee’s counties. You can learn a good deal about things such as this just by picking up one of those tall, narrow books sold at historical sites around the state, that present the text of all the official historical markers in the state. Every county in Tennessee, I believe, has such a marker along its boundary somewhere, so it’s a great resource for learning why our counties are named as they are.

AND NOW, FOR SOMETHING COMPLETELY DIFFERENT ...

Some county name sources, of course, are so obvious as to require no investigation to sort out. I mean, who can’t figure out that Jefferson County is named for George Jefferson, the laundryman who made his name by “moving on up to the east side to a deluxe apartment in the sky?”

And Washington County? Named for Denzel Washington, obviously, because who doesn’t love Denzel?

Hawkins County? Named for the late Screamin’ Jay Hawkins, who dressed all spooky and sang about how he put a spell on you.

White County? That’s for the lovely Vanna, famous “Wheel of Fortune” letter-flipper. Why there isn’t also a Sajak County, I’ve got no clue, especially since Pat Sajak was a Nashville radio deejay when I was in college. I heard him on my car radio quite often.

Chester County … that one’s for the original deputy of Marshal Matt Dillon, before Festus came riding in on that mule.

Hickman County, on the other hand, was named for Dwayne Hickman, who played college boy Dobie Gillis on TV in the same general period Dennis Weaver was limping down the streets of Dodge City, portraying the afore-mentioned Chester.

Okay, okay, I admit it: I’m messing with you on these last ones … but you figured that out already. I finished this column in the early morning, you see, after our dog kept me up through much of the night, riled up at something we never could identify. That left me a little punchy and without much time, focus or energy to look things up.

That scenario makes it a little too easy to get silly. So I did. I do apologize.