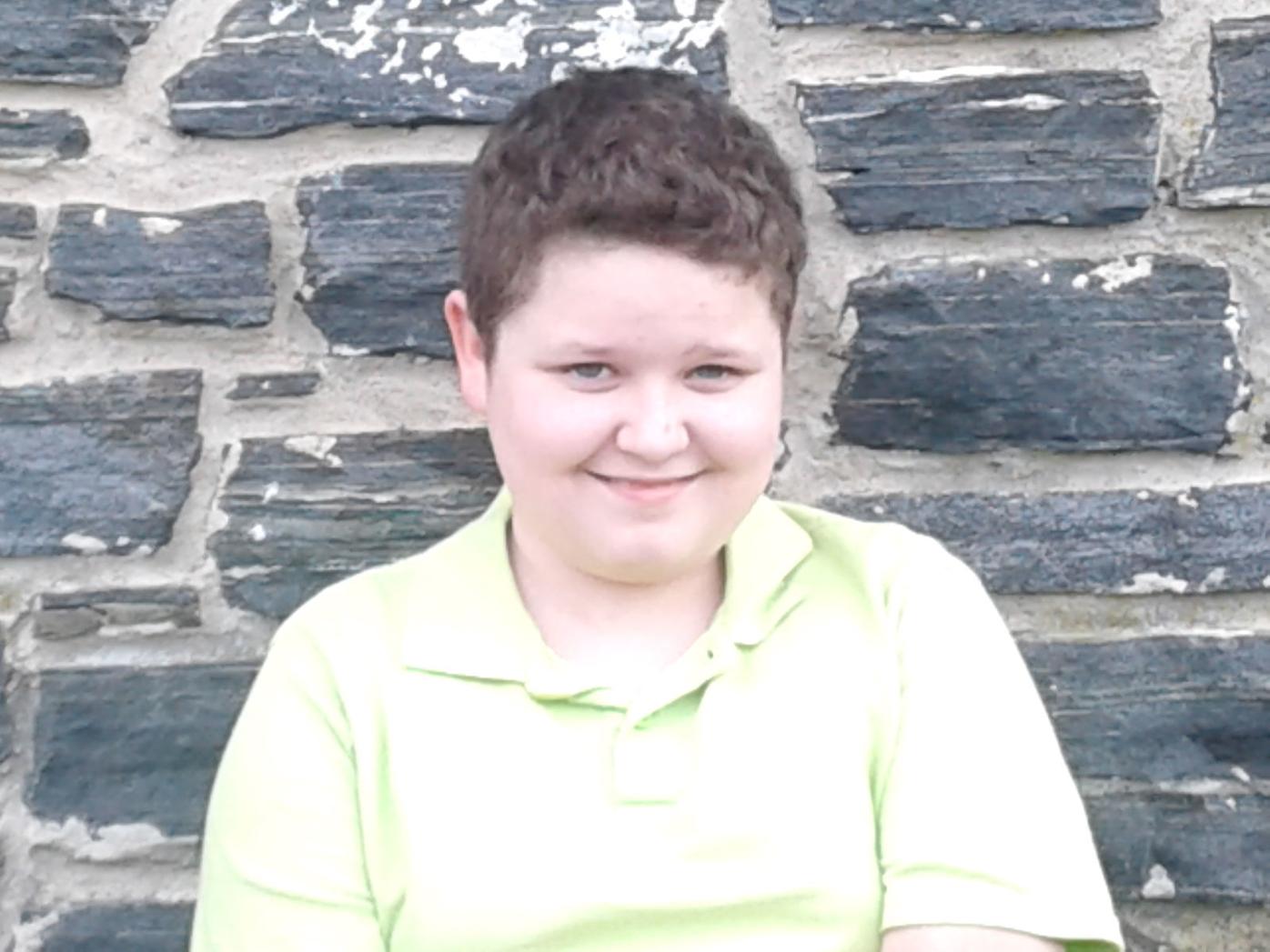 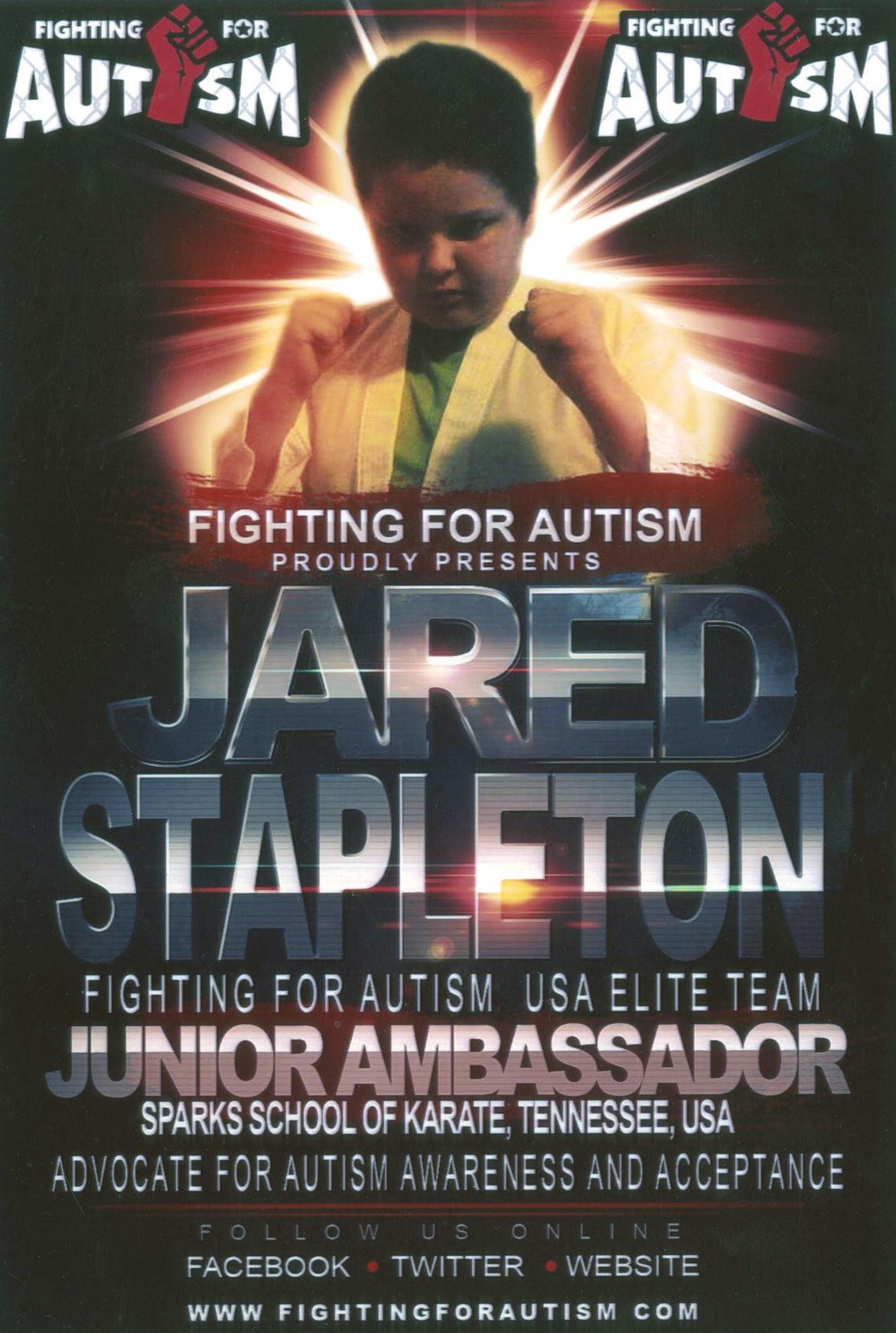 As a junior ambassador for Fighting for Autism, Jared Stapleton has his own card that he can share at events and sign for fans. 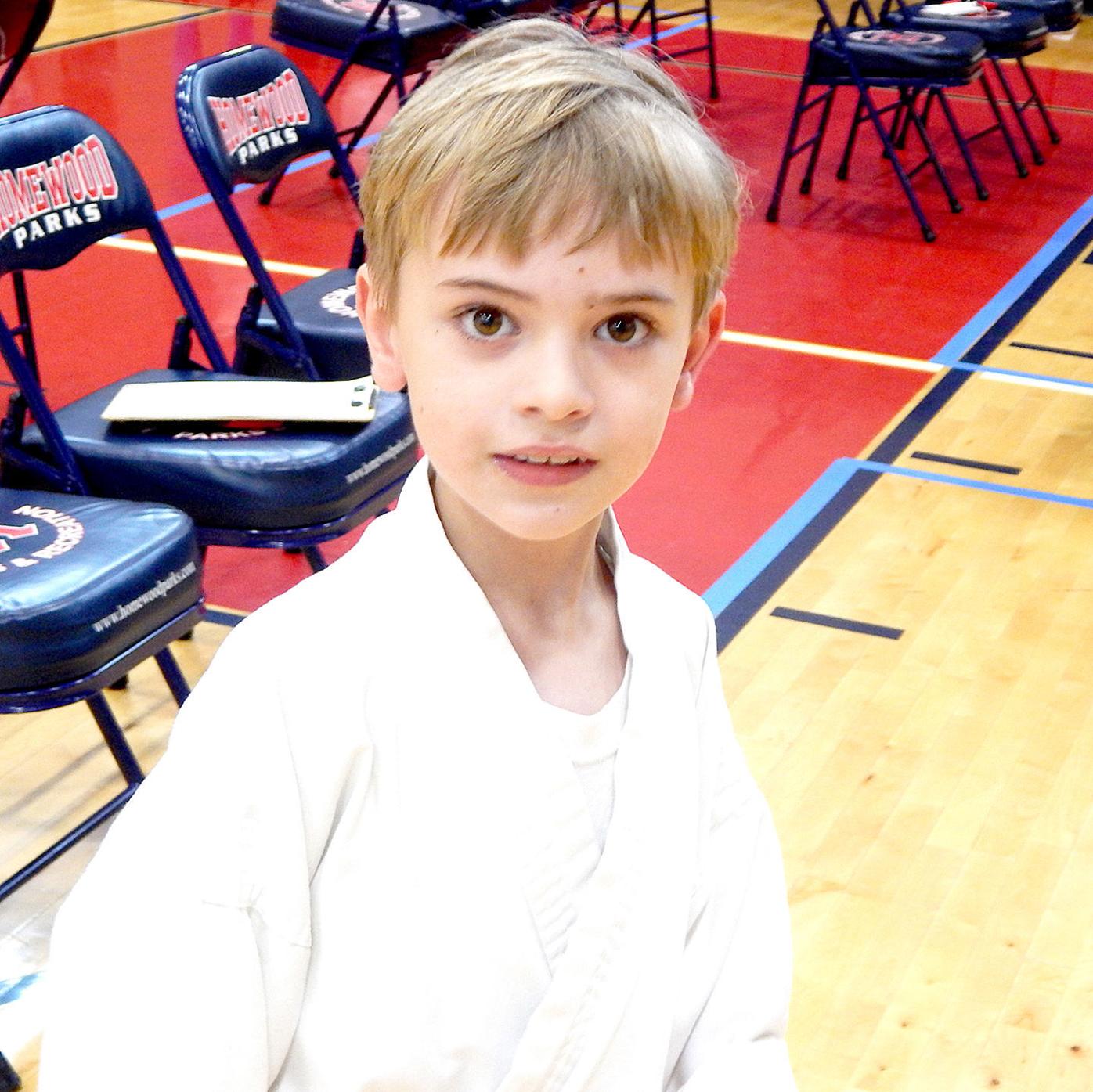 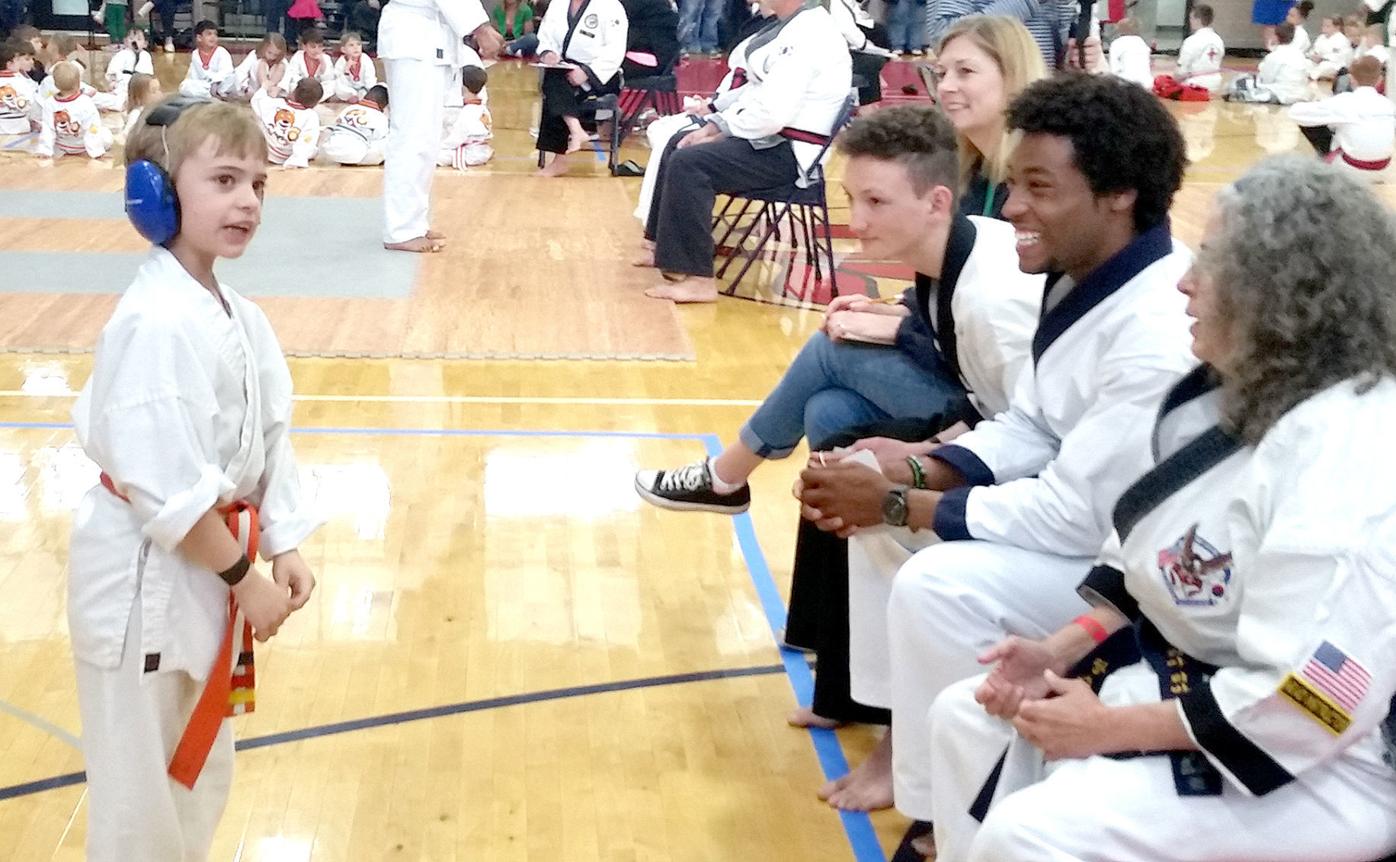 Ryan Foster talks to judges during a karate tournament. He wears earmuffs to feel more comfortable in environments that he might otherwise find frightening.

As a junior ambassador for Fighting for Autism, Jared Stapleton has his own card that he can share at events and sign for fans.

Ryan Foster talks to judges during a karate tournament. He wears earmuffs to feel more comfortable in environments that he might otherwise find frightening.

Bright lights, a large crowd and lots of noise make sporting events exciting for most children. But, for those on the autism spectrum, those characteristics can be disconcerting and even frightening.

Martial arts have helped two local youngsters grow in self-confidence and push through their fears to perform in an uncomfortable environment.

Jared Stapleton, a 12-year-old from Chuckey, recently found himself in the center of the ring, fighting in a light-saber match with a family friend as part of an Evolution Wrestling event earlier this year in the Tri-Cities to bring awareness to autism.

Watching the video of the match on YouTube, Jared’s father, Carlos Stapleton, gets emotional when he sees Jared’s smile as he gets to his corner. “I hadn’t seen him smile like that for a long time,” he said.

Ryan Foster, an 8-year-old from Greeneville diagnosed on the autism spectrum, won medals in all his events in his first karate tournament. He had originally only intended to participate in just one.

“As he took the floor, he was curled up in fear,” his mother, Beth Foster, posted on Facebook following the trip. “With each point he scored, he stood up a little straighter, he engaged a little more. As his teacher aptly put it, ‘It was like watching a flower bloom.’ His second match was the kid he was most scared of, but by the end of it, he was remembering his combos and blocking and even smiling a little bit. It was so amazing to watch.”

Jared is the only junior ambassador in the state for Fighting for Autism, a global non-profit organization that seeks to increase awareness about the autism spectrum and encourage acceptance and inclusion using the avenue of sports participation, particularly the martial arts.

His role as junior ambassador is how he found himself in a light-saber battle with his family friend in front a crowd of about 300 people. His parents were not without concern, being unsure how he would react due to his fear of loud noises and large crowds.

His father, Carlos, who is the state director for Fighting for Autism, said that once event promoters learned about Jared’s promise of a light-saber rematch with family friend, Mark Laws, a trainer for wrestling and boxing leagues, as a possible feature between matches, they wanted to use pyrotechnics, loud music and lighting effects for the battle.

Unsure of whether Jared might freeze or run when his introduction was given, they felt better when the youngster asked his father, who referees for the league, to walk out with him and hold his hand.

After the battle and after the wrestling show ended, children and adults alike approached Jared wanting his autograph, commenting that they were surprised that someone with autism could get in the ring and do what he’d done, his father said.

“Many people may have never interacted with a child with autism previously,” he added. “It is a good opportunity for Jared to use as a teaching experience about what people with autism can do.”

Jared, who has been diagnosed at the higher functioning end of the spectrum, is a student at Sparks School of Karate in Greeneville. His confidence and self-esteem have grown through his study of the martial arts and provide a way to help others learn about autism. An inspiration for Jared in his activities is his older brother, Jacob, who is nonverbal and at the other end of the autism spectrum.

His self-confidence and self-esteem have also grown through his enrollment in the Tennessee Virtual Academy, an online public school that provides one-on-one attention and allows students to proceed at their own pace, according to his mother, Connie Stapleton.

When the family moved to Greene County, Jared was enrolled in Chuckey Elementary School and thrived. However, middle school was a different environment, and he was teased about his freezing behaviors when he heard loud noises, such as the bell ringing for changing classes, she said.

After his grades fell and his self-confidence hit a low, Jared’s parents enrolled him in the Virtual Learning Academy, which he’d previously attended for a time in elementary school. The Virtual Academy has been a blessing, Stapleton added.

Ryan has been a student of karate since early last year, and is a student at East Tennessee Tang Soo Do. His mother, Beth Foster, said the school tailors its instruction to each child’s needs and works with them where they are.

Karate is a a good social outlet for Ryan. It has helped him learn to be comfortable with people outside his family.

At his first karate tournament in March in Birmingham, Alabama, participants were to sit with the competitors in their category, his mother said. That was a concern because he would not be with a family member, but an instructor.

However, Ryan held the instructor’s hand and stayed calm in a situation that might otherwise have caused him to be fearful, she said. “It is really nice to see his interaction with others and his growing trust in other people,” Foster added.

Ryan and his three siblings are home schooled, and Ryan followed an older sister in his interest in taking karate classes.

In the Birmingham tournament, Ryan competed in a division for children with special needs. He originally intended to only compete in forms events, remembering and performing a series of moves in sequence.

However, he also competed in the weapons and sparring events even though he was indecisive about the sparring event through much of the day because he was considerably smaller than the other two boys in his bracket, Foster continued.

After it was decided that they would do “no contact” sparring, Ryan was still scared and said so, she said. His mother reassured him that it was OK to be scared, but because he was brave, he would go out there.

Foster added that Ryan pushes through huge fears daily and it is inspiring to watch.

The tournament presented some things that Ryan is sensitive to all in one event — new places, rooms with high open ceilings and rooms with a lot of noise.

“He has come a long way in the last few years. For a while, we couldn’t even take him into certain places, but now he can go in to most places as long as he has a hand to hold of someone he trusts, or his earmuffs,” she said. “Every day, he faces fears of things that most of us don’t even notice, but he has learned to take a deep breath, trust his family and friends to keep him safe and self-talk about ‘being brave.’ I have never met anyone more brave than this child. He has overcome so much. He still has far to go, but I have no doubt that he will make it.”