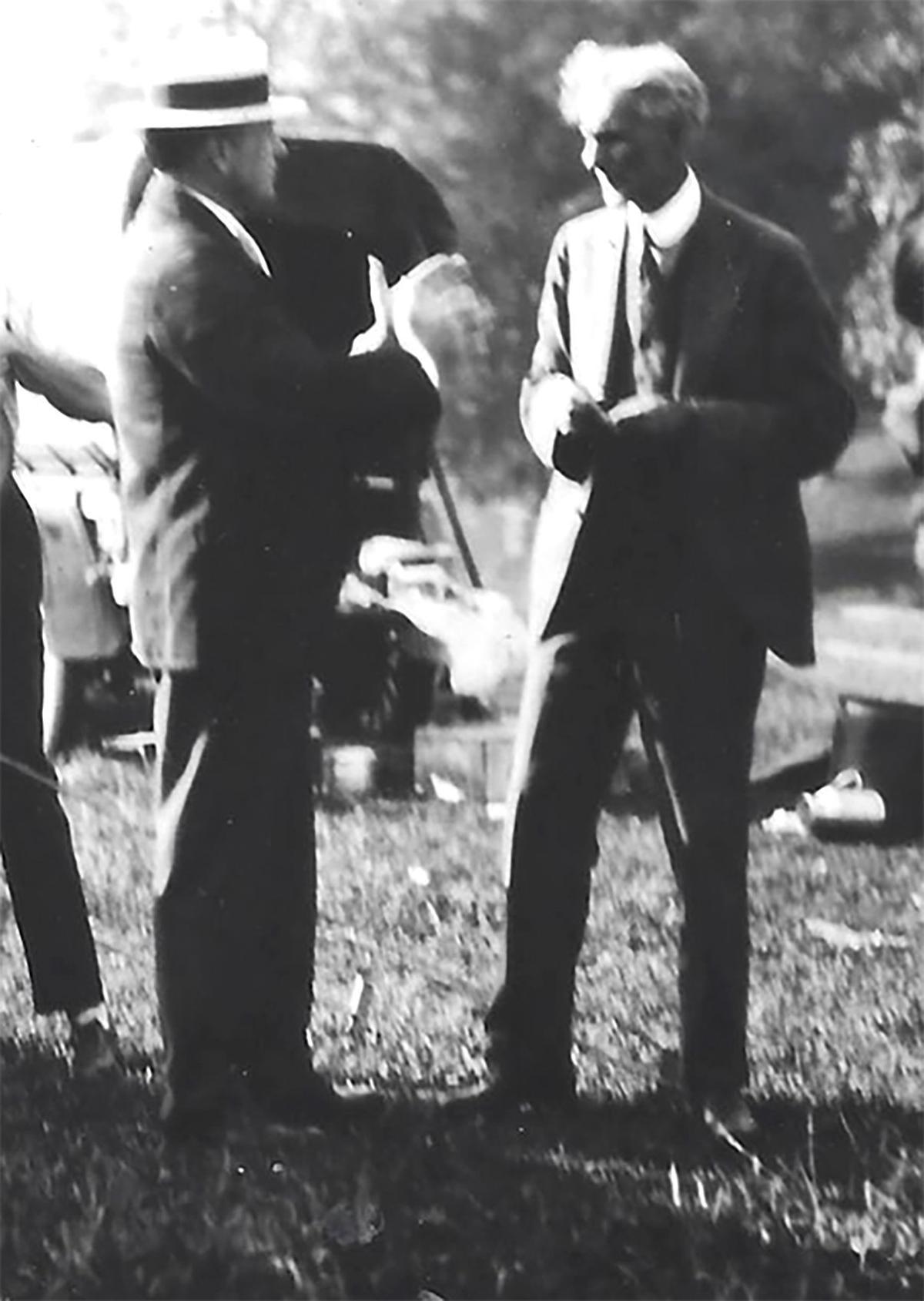 The image may not be the sharpest, but this photograph taken during the journey of the Vagabonds through Northeast Tennessee in 1918 shows a recognizable image of Henry Ford, right, in conversation with another man during a Vagabond stop in our region. 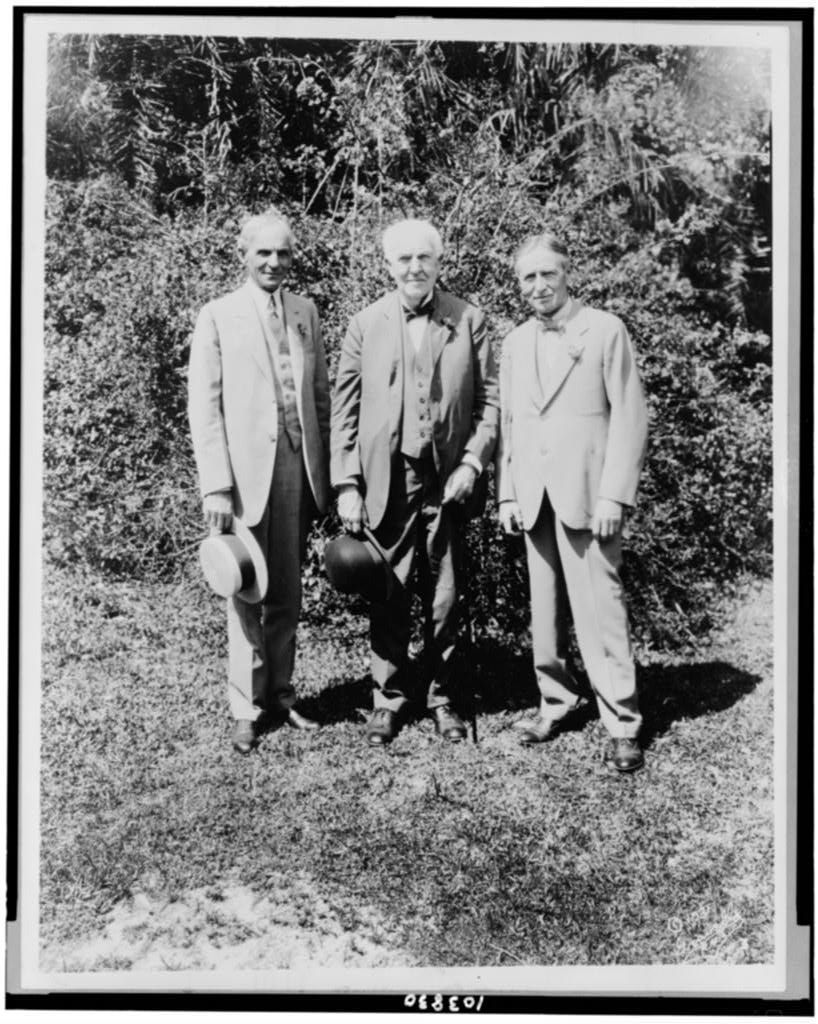 Henry Ford, Thomas Edison and Harvey Firestone pose for a photo during one of their excursions.

The image may not be the sharpest, but this photograph taken during the journey of the Vagabonds through Northeast Tennessee in 1918 shows a recognizable image of Henry Ford, right, in conversation with another man during a Vagabond stop in our region.

Henry Ford, Thomas Edison and Harvey Firestone pose for a photo during one of their excursions.

Editor’s Note: Last week, we left the traveling group of dignitaries (Henry Ford, Thomas Edison, John Burroughs and Harvey Firestone) who called themselves The Vagabonds, as they passed through the Tri-Cities area and Jonesborough in 1918. In this final leg of the journey, the Vagabonds come through Limestone, then to Greeneville and beyond.

Driving from the farm near Jonesborough, the group veered off the main road for a quick visit to the Birthplace of Davy Crockett. Ford remarked “this spot along the river would make an ideal camp.” Limestone was a small, yet busy railroad town in 1918. The Vagabonds drove on to Greeneville and then on to Newport.

The Knoxville paper relates the group’s visit to Newport, saying they arrived at noon. “The party was met a mile out of town by Ex-Governor Hooper and Mayor Allen. They dined at the Mims Hotel and spent a half hour shaking hands and visiting with guests. Ford was reminded that the Senate primary in Michigan was that day, but Ford pretended not to know. Ford was a Senate candidate on both the Republican and Democratic primary tickets. When asked why, he replied, ‘Both parties drive cars.’”

It was noted “The renowned party left town at 1 o’clock over the Dixie Highway to Asheville. It was the most distinguished party of national figures that Newport ever had the honor of having as guests, even for a brief period of time.”

The group drove through Hot Springs, North Carolina, where Firestone convinced Edison to stop and visit a German prisoner of war camp. Guinn relates, “The facility struck the tire maker and Edison as overly pleasant.” Firestone later wrote, “The 2,200 interned Germans all looked well-kept and well-fed and certainly were having a nice vacation.” Just three short months later World War I would grind to a halt. All three of the industrialists had profited by the war, but all three equally found the war repulsive and wanted to see its end. In an Asheville interview, Edison was asked the cause of the war. His reply was, “It’s man’s foolishness. That’s all you can make out of it. Man is a fool.”

The Vagabonds arrived in Asheville after an interesting ride across the mountain where Firestone found the steep mountain roads unnerving, causing him to keep “shifting from one side of his car’s back passenger seat to the other, always trying to stay opposite the precipice, annoying Edison.”

When the group arrived in Asheville, they decided to rough it at the Grove Park Inn. Edison balked at staying in comfort and Firestone offered to “camp” with him wherever he wished. Edison gave in to a bath and a bed for a change. Edison remained grumpy for a couple days afterward. On their first trip, Edison made a rule that they would not bathe or shave the entire trip. Firestone quickly broke that rule by keeping a cleanly shaved face.

The next morning, Burroughs announced that he’d “had enough” and planned to take the train back to New York. Nobody tried to talk him out of it. Ford and Edison went for a long walk after breakfast, ironing out their differences over the last few days. The three remaining men decided to send their trucks with camping and kitchen equipment back to Michigan and stay in hotels the remainder of their trip.

As for where they stopped in Greeneville, Ford stopped at Ford dealers along the way and Greene County Motor Company on Summer Street was the local dealer. They liked to stop at newspapers and pick up a copy of the local paper. They claimed they were not looking for publicity, but you can bet your investment dollars they were. The offices of The Greeneville Daily Sun would have been their second stop here. My best guess is they went to the dealer who directed them to the Sun office. They drove through downtown before returning to Main to continue toward Newport.

Another mystery, for me anyway, is why the group was traveling in Packards. Packard was a rival company and, as far as I know, Ford didn’t own an interest it. Ford was said to fire an employee who owned any car other than a ford. All the newspapers say they were traveling in the Packard automobiles in 1918. I know when Ford died in 1947, folks were upset the founder of the Ford Motor Company was carried to his grave in a Packard hearse instead of a Ford-built Lincoln.

About that other article I mentioned, “Ford Considering Greeneville Plant.” It was in the Nashville Banner Wednesday, March 19, 1919. “It is now claimed that an additional power dam will be shortly erected on Nolichucky river within a few miles of Greeneville. This plant is to be erected by the Ford automobile company.” It goes on to say, “Ford visited here a year earlier and was impressed with the area and its waterpower.”

I asked Dan Burgner about the second dam, and he informed me there were two more dams planned at one time. This one was likely the one to be near the current pumping station at the old Buckingham Ferry. The other was to be near the Cocke County line. Neither came about, of course. Ford shifted his attention to a location in Muscle Shoals, and Greeneville missed out on becoming an automobile manufacturing town.

By 1921, thanks to the news coverage of the Vagabonds, autocamping had taken the country by storm. These so called “autocamps” were springing up to accommodate this new form of travel and leisure. Thanks to the Vagabonds, America’s infatuation with the motorcar, combined with their love of outdoor recreation and camping, brought a new market into the economy. Ford, Firestone, and Edison profited tremendously by it. The downside was that the remaining three men found themselves in a position where they could not travel as freely as in the early days.

I talked with my favorite car guy, Kent Bewley of the City Garage Car Museum. I asked Kent why Henry Ford would be riding in a Packard. I knew it was a rich man’s luxury car, a status symbol in 1918, but the founder of Ford Motor Company riding in one is surprising. Kent said the Packard was the “biggest American car, with a long wheelbase, a good ride.” He was not surprised that these giants of their day would seek out the best in travel comfort.

Bewley said his father, Roswell Bewley, started a Packard dealership in Greeneville in 1938. Kent said at age 25 he was the youngest dealer in the U.S. Kent has a 1914 Ford and a 1950 Packard at the City Garage Car Museum. I would suggest stopping in and checking them out.

In the book, “Uncommon Friends” James Newton relates that Ford gave Edison a Ford each new model year, yet, “He preferred the luxury and comfort of the Packard.” Edison enjoyed his new Fords and loved to drive them around the neighborhood, but when it was time to go some distance, the Packard won out. Since Edison was a major player in the Vagabonds travel planning, he is likely the “why” they were in Packards. Ford was not likely to argue with the man he most looked up to.

Caroline Blanks suggested we follow the route of The Vagabonds to Asheville, stopping at the places they did along the way. I know where they were in Bristol, Johnson City, Jonesborough, Newport, Hot Springs, and Asheville. It would be a fun day following the old roads seeing what is there and trying to imagine bumping along in a Packard with some of the greatest minds of the industrial age. What better way than to end the adventure than with a stop at The Grove Park Inn where they display photos of the groups visit?

These were four self-made men with big ideas and big egos. They were rock stars of their day. They didn’t see eye-to-eye on everything, they didn’t always get along, but they did have a tremendous respect for one another. They were like a family with their spats and disagreements, but still they were giants of their era, titans of industry, pals out to enjoy the country.

It is hard for us to fathom 102 years later just how popular these men were. One videographer compared them to the Beatles coming to America in 1963 and stopping by your home asking to camp in your back yard.

Yes, they were that big. And for a brief time, they stopped in Greeneville.

In a followup column next week, we’ll explore the Vagabond connection to a family activity you may be doing this weekend.