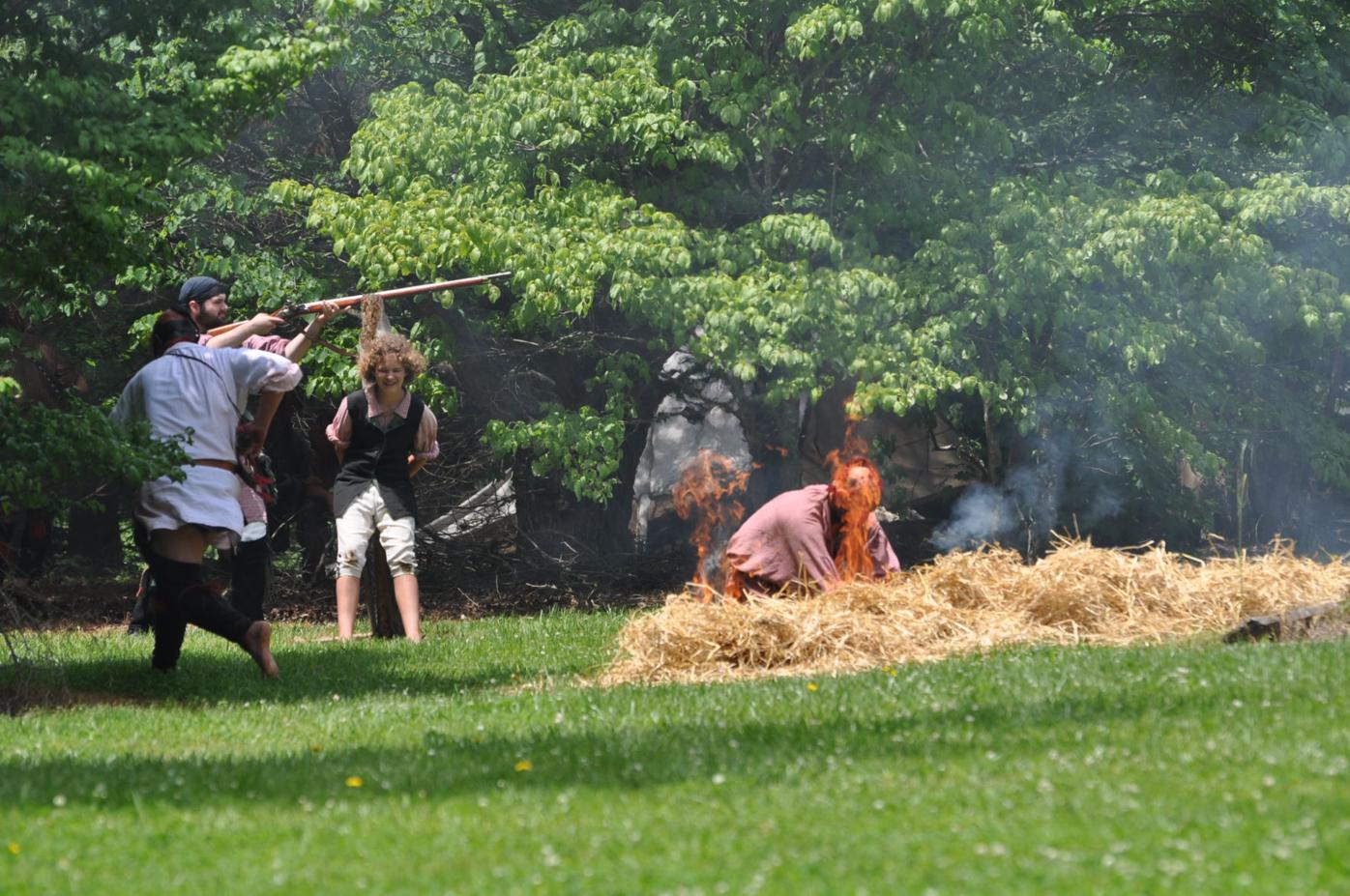 The Cherokee start a fire in an attempt to burn Fort Watauga during this 2013 reenactment of the battle. 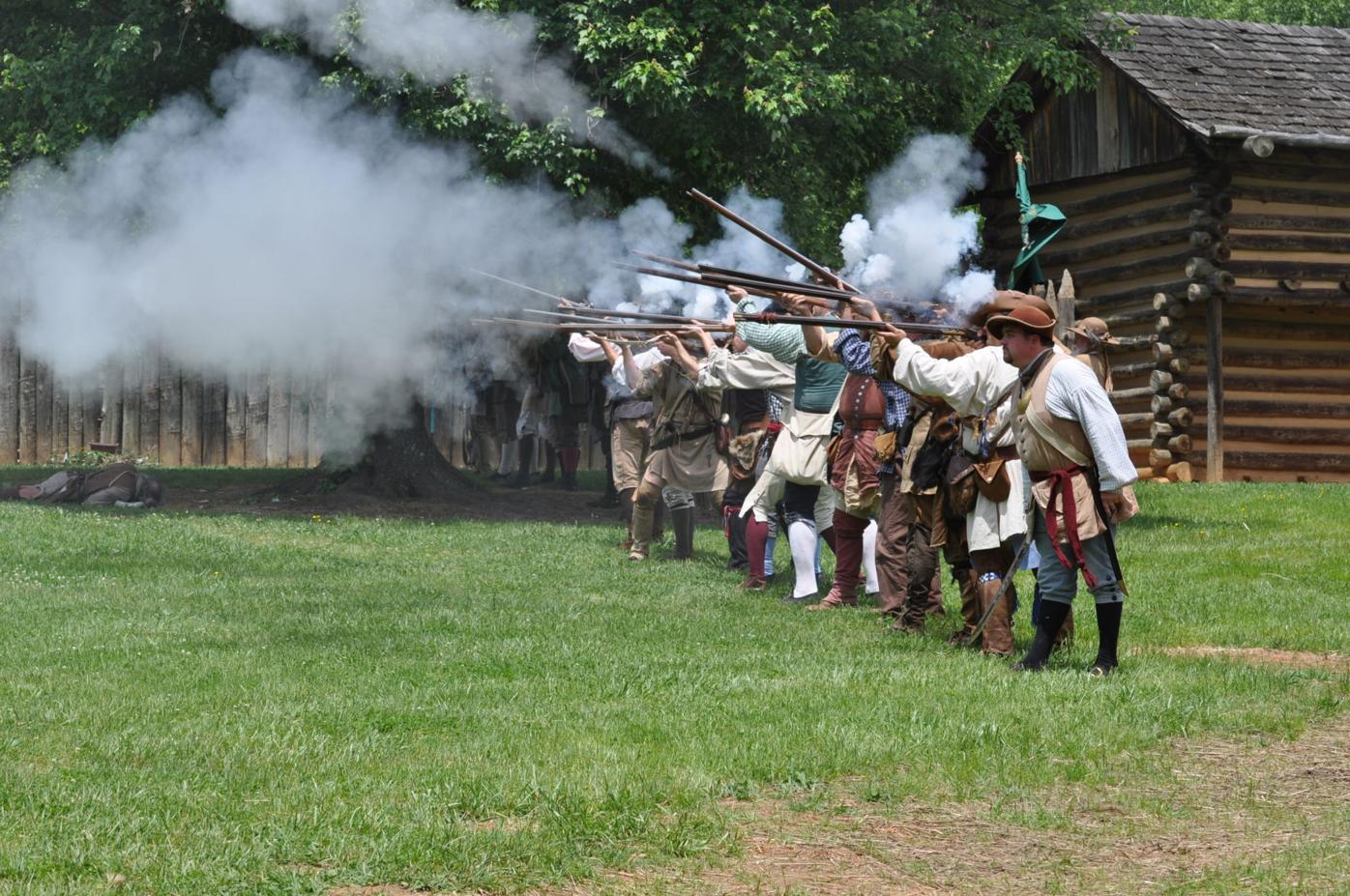 The fort’s militia members drive the Cherokee attackers from the wall of Fort Watauga in this 2013 photo. 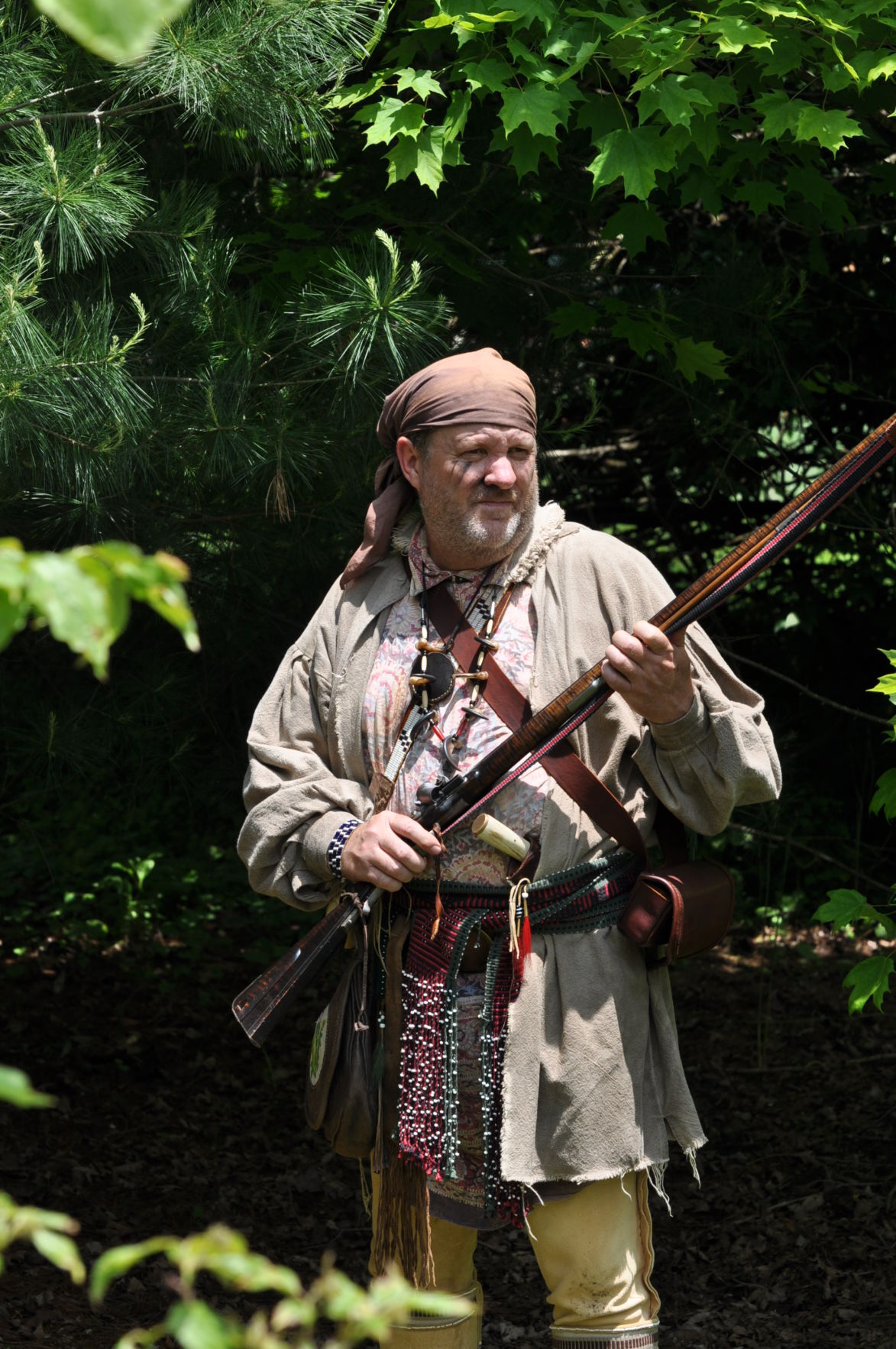 Tim Massey decided to help the beleaguered Cherokee drive the settlers from Fort Watauga in this 2013 photo.

The Cherokee start a fire in an attempt to burn Fort Watauga during this 2013 reenactment of the battle.

The fort’s militia members drive the Cherokee attackers from the wall of Fort Watauga in this 2013 photo.

Tim Massey decided to help the beleaguered Cherokee drive the settlers from Fort Watauga in this 2013 photo.

This weekend is the annual event, “The Siege at Fort Watauga.” I have written in the past about the 1776 attack of the Cherokee bent on driving the settlers from this side of the mountains. The siege lasted almost three weeks. It is hard for us today to imagine being cooped up in a wooden fort with over 200 other people, cattle, horses and livestock. Backed by the British, the Cherokee were relentless in their continuing attacks.

They had burned every home, barn and crop, killing livestock they encountered as they made their way to Watauga. Fort Lee, out near the David Crockett Birthplace, was still under construction and was burned.

Nancy Ward, the Beloved Woman and political leader of the Cherokee, had sent a warning to the Overmountain people of the impending attack. She warned of the Cherokee invasion plans to trader Isaac Thomas. Thomas proceeded to deliver the news to John Sevier at the Nolichucky settlement as he was overseeing the construction of Fort Lee. Sevier and the other settlers of the area made their way to the safety of the walls of Fort Watauga, then known as Fort Caswell.

Had Ward not warned the settlers, the three settlements of Watauga at Elizabethton, Fort Patrick Henry at Kingsport, and the Carter’s Valley settlements would have undoubtably been wiped out. Had they not heeded the warnings and loaded up on lead, powder and other supplies, they could not have held out through the extended siege.

A lot has changed in 245 years. A trip that took days now can be traveled in minutes. The old fort has been reconstructed and is now a state historic site. The annual siege is a reminder of our past — it is our heritage. It offers a glimpse into what life was like back then. But not really. We can never see things as they existed 245 years ago. We cannot feel what or how they felt. We can only interpret history as best we can today.

I said last week the annual “Siege” has been toned down this year due to COVID. It was canceled last year, although we enjoyed limited events at the fort. What I am hearing now is that with events canceled all over the country and reenactors having been pent up for a year, well, this might just be a really large event after all. With groups coming in from near and far, with many reenactors that have never been to Sycamore Shoals, this entire weekend can be a special time as far as events go.

Many of us enjoyed camping as Boy Scouts or just in the backyard, enjoying those backyard battles, cooking on a campfire as children and sharing a passion for history. Well, this is the adult version. It is the place to be. Even if you just want to check things out, it is well worth the drive to Elizabethton. Walk through the camps, enjoy the battle, visit with reenactors — it is a learning experience.

On Saturday morning at 10:30 a.m., the Watauga Chapter Sons of the American Revolution and the Fort Watauga Society Children of the American Revolution will host a special program in the amphitheater just in rear of the fort. Over the years, we have honored the women of the revolution and the people of color that supported the cause. Now it is time to honor the children. At a time when children grew up quick, many served in the militias as young as 10-12 years of age. Boys were given a rifle at age 6 and taught how to use it. It was not long before they were helping put food on the family table. The girls were taught the skills of using a rifle, not by their Dad, but by their mother. They too played a role in defending the frontier.

This program, “Salute to our Children Soldiers,” is a state Sons of the American Revolution, Tennessee225, and USA250 event. The state SAR color guard will be part of the program. Dignitaries from across the Southeast will participate. The guest speaker is period children’s author Geoff Baggett from Kentucky. The Watauga Valley Fife & Drums will present a special musical tribute to the children soldiers. The Watauga Valley Fife & Drums are the official Fife & Drum Corps of Tennessee. It is made up of children, and they are amazingly talented.

This is a short 45-minute drive from Greeneville and a great day trip. It is a time to learn and experience living history. Be sure to walk through the museum and watch the film.

In the afternoon, the Cherokee will raise your hair with their war hoops as they attack and try to burn the fort once again. Will they overrun the fort this time? Come experience it for yourself as we trail the past.